To date, surgical resection along with chemotherapy and radiation therapy represent the standard of care in the treatment of high-grade gliomas. Despite, some advancement in diagnostic and therapy, the long-term outcome remains poor in this subset of brain tumors. Since it's discovery, leptin and associated receptor ObR have been shown to exist in several isofroms in various brain regions. Experimental studies suggest an association between obesity/diabetes, glucose lowering drugs (metformin) with the therapeutic outcome of gliobalstoma. Contrary, conflicting findings were observed in retrospective conducted and prospective observational human trials. Although leptin and related pathways represent novel targets for diagnosis and therapy of brain tumors, randomized-controlled Trials have yet to determine it's potential value and are currently on the way.

In addition to its canonical role in immune-metabolic signaling (satiety and weight loss/gain), leptin is well-known to promote cellular proliferation, survival and migration through its associated receptor (ObR) and related pathways under physiological conditions, as well as during the initiation and progression of cancers of different organ systems (breast, lung, prostate, brain). Leptin/ObR activities have been characterized as anti-apoptotic, proliferative and potentially pro-angiogenetic [1][2]. In particular, data from experimental (in vivo and in vitro) and human studies indicate that the leptin/ObR axis and its degree of expression may differ depending on brain tumor grade [3][4][5][6]. For instance, compared to low-grade gliomas and other brain tumor entities, glioblastoma multiforme (GBM) cells display a relatively high leptin and ObR expression profile, suggesting a role for the leptin/ObR ratio in the development and recurrence of high-grade, aggressive gliomas (glioblastoma; cell growth, invasion, migration) [1].

Leptin is a polypeptide hormone (~16 kDa consisting of 167 amino acids with an N-terminal secretory-signal sequence of 21 amino acids) that is primarily secreted from adipose tissue and plays an essential role in energy balance by regulating the homeostatic mass of adipose tissue and controlling food intake via hypothalamic nuclei (arcuatus nucleus of the hypothalamus). Leptin and ObR are widely distributed and expressed in the brain and in a broad range of tissues including skeletal muscle, ovaries, placenta and stomach [7][8][9]. Leptin is encoded by the LEP gene on chromosome 7q31.3 in humans (murine analogue: ob gene), and its principal site of action is in the brain, where it mainly acts on the hypothalamus to promote the activity of anorexigenic POMC (Pro-opiomelanocortin) neurons and inhibit orexigenic NPY/AgRP (Neuropeptide Y/Agouti-related protein) neurons in the arcuate nucleus [7][8][9]. In order to regulate metabolic hemostasis, leptin and its receptor ObR directly interact with the arcuate nucleus (ARC) of the hypothalamus, to be more specific, the AgRP-neurons (activation of food intake) and the POMC neurons (inhibition of food intake). Depending on the specific subunit of receptors, AgRP dysfunction leads to emaciation, starvation and death, while alteration of the POMC pathway leads to obesity. In addition, experimental data indicates that leptin is relevant for locomotor activity via melanocortin-expressing neurons of the hypothalamus projecting to striatal dopaminergic neurons [10][11][12]. AgRP projects to the paraventricular nucleus of the hypothalamus and the dorsomedial hypothalamus, which in turn interplay with extra-hypothalamic circuits such as the locus ceruleus, the periaqueductal grey, the parabrachial nucleus and the sympathetic premotor neurons of the brainstem relevant for the central regulation of adipose tissue thermogenesis. Although the precise mechanism remains to be clarified, experimental studies indicate that leptin enters the brain via different entry gates, first, via endothelial cells of the blood-brain-barrier (BBB), second via endothelial cells of the blood-cerebrospinal fluid (CSF) barrier of the choroid plexus, and lastly via stretched cells (ependymoglial cells) coined tanycyte (tight junctions) of the medio-basal hypothalamus, forming a barrier between CSF and the median eminence (ventral proportion of the pars tuberal of the hypothalamus). The receptor for leptin (ObR), expressed in endothelial/epithelial cells and tanycyte of the brain, may act as a pivotal structure for leptin transportation across the BBB and the blood-CSF barrier depending on the isoform [13][14][15][16]. Of note, the central as well as peripheral circadian clock impact the effect promoted by leptin and ObR leading to altered leptin synthesis in adipose tissue and to central leptin resistance [17]. As a pleiotropic hormone, leptin affects other brain regions such as the brainstem, the forebrain and the spinal cord and regulates behavior, thermogenesis, metabolism, the neuro-endocrine axis, immune functions and various other physiological activities [7][8]. Besides its principal activities in the brain, it also directly acts on immune cells in the periphery [7].

ObR belongs to the class I cytokine receptor superfamily and has various isoforms, including a long isoform comprised of extensive cytoplasmic domains that is expressed in nearly all tissues and is responsible for most leptin signal transduction [18]. Signal transduction through this receptor involves tyrosine kinases of the Janus kinase family (JAKs) and signal transducers and activators of transcription (STATs) [9][18]. Following leptin binding to its extracellular domain, ObR dimerizes, leading to a conformational change that activates JAK2, which is non-covalently associated with ObR’s cytoplasmic domain, leading to downstream activation of STAT3 [7][19]. Activated STAT3 then upregulates the transcription of target genes, including SOCS3 (suppressor of cytokine signaling-3), which acts in a negative feedback loop to inhibit leptin signaling [7][19].

Genetic polymorphisms in either leptin or its receptor are linked to increased risk and progression of various cancers including oral, prostate and breast cancers [7]. In addition, leptin and its receptor have been shown to be expressed in various brain tumor pathologies [20][21]. Leptin has been shown to upregulate various intracellular signaling pathways linked to excessive proliferation, growth, migration, and invasion in various glioblastoma cell lines (Figure 1) [8] including NF-κB, p38-MAP Kinase, JAK/STAT3 and PI3K/Akt/mTOR/P70S6K. Interestingly, crosstalk between leptin and soluble Phospholipase A2-IIa enhances proliferation and migration in astrocytoma cell lines via the PI3K/Akt/mTOR/P70S6K pathway (Figure 1) [8]. Furthermore, ObR expression in glioblastoma cells imparts progenitor/stem cell-like properties through STAT3-mediated upregulation of the pluripotency-associated SOX2/OCT4 signaling axis, which underlies the self-renewal properties of glioma cells and resistance to drugs such as temozolomide (Figure 1) [18]. Interestingly, upregulation of adenosine monophosphate-associated protein kinase (AMPK) following metformin administration abrogates the leptin-induced growth and migration of glioblastoma cells, also mediated by downregulation of STAT3 and Akt/PKB serine threonine kinase (Figure 1) [22]. 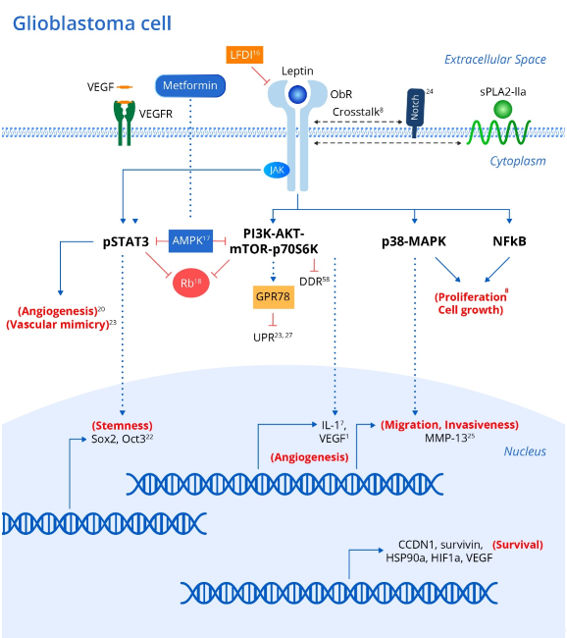 As mentioned above, STAT3 and Akt/PKB are known to be consistently upregulated in various glioblastoma cell lines due to leptin/ObR overexpression, which drives dysregulation of the cell cycle suppressor Rb (retinoblastoma protein), thus promoting uncontrolled cellular proliferation in the absence of normal suppressive mechanisms (Figure 1) [23].

Antagonism of ObR in glioblastoma cell lines peptide inhibits proliferation and invasiveness, and is associated with downregulation of leptin-responsive genes such as cyclin D1 (CCDN1), survivin (BIRC5), heat shock protein (HSP90A), hypoxia inducible factor (HIF1A) and vascular endothelial growth factor (VEGF) [19]. Intriguingly, the stem cell behavior in glioblastoma cell lines has been associated with upregulation of NOTCH and its downstream signaling pathways, as evident by increased expression of the NOTCH isoforms (NOTCH1, NOTCH2, NOTCH3, NOTCH4) and NOTCH target genes (HES1, survivin) (Figure 1) [24]. Selective LFDI-mediated antagonism of ObR abrogates NOTCH signaling, suggesting a critical role of leptin/ObR in the modulation of NOTCH-dependent growth, proliferation and migration of glioblastoma cells [24], and a previous study suggested that this invasiveness and migration were driven by increased levels of matrix metalloproteinase (MMP)-13 via the MAPK pathway (Figure 1) [25].

One hallmark of all cancers is the upregulation of mechanisms leading to sustained angiogenesis. Interestingly, transformation of low-grade gliomas into the more aggressive and lethal glioblastoma multiform (GBM) is associated with overexpression of intra-tumoral leptin as well as increased angiogenesis [23]. Leptin released from glioma cells partially contributes to angiogenesis, as evaluated by induced tube formation capacity in human umbilical vein endothelial cells (HUVECs) via STAT3 phosphorylation [23].

Interestingly, VEGF also activated angiogenesis through STAT3 phosphorylation, and co-inhibition of the receptors for both leptin and VEGF suppressed angiogenesis in HUVECs induced by conditioned medium from glioma cells more than either antagonist alone (Figure 1) [23]. Leptin synergizes with and even increases the levels of VEGF in various cancers, probably through MAPK- and PI3K-mediated upregulation of IL-1 [1]. In addition to typical tumor angiogenesis, the extensive micro-vascularization of glioblastomas also relies on vasculogenic mimicry (Figure 1) [26], in which tumor cells rather than endothelial cells promote new vessels to augment tumor blood supply. Intriguingly, glioblastomas with high ObR expression displayed more extensive vasculogenic mimicry, which was associated with poor prognosis [26]. Cancer cells also acquire growth-sustaining and antiapoptotic mechanisms. Interestingly, transfection of neuroblastoma cells with ObR protected against the endoplasmic reticulum (ER) stress response via the unfolded protein response (UPR) by upregulating the chaperone molecule GRP78 (78 kDa glucose regulated protein) [27]. While sustained ER stress induces apoptosis, GRP78 induction by leptin was not associated with prolonged UPR signaling (which typically induces apoptosis), and is instead dependent on the PI3K-Akt-mTOR pathway, thus protecting the cells against apoptosis [23]. Chaperones are known to promote tumor growth and survival, and GRP78 upregulation downstream of leptin may also underlie glioblastoma cell survival, which requires further investigation (Figure 1) [27].

3. Associations between Brain Tumor Entities and Treatment Outcome with the Metabolic State

Increasing evidence supports a link between obesity and associated metabolic disorders with carcinogenesis in a variety of organ systems. In contrast to previous paradigms, white adipose tissue (WAT) is now considered not only to be an energy storage system, but also to act as an active endocrine organ capable of communicating with central and peripheral inflammatory mediators that promote the development of a wide variety of neurological, psychiatric, metabolic and oncological diseases [28].

WAT cells synthetize leptin and related immune-metabolic mediators, which in turn drive cancer development, maintenance and recurrence. The main biological characteristics of leptin have been described as promoting inflammation, proliferation, anti-apoptosis, cell migration, differentiation and invasion [28]. In a meta-analysis, Sergentanis et al. assessed the potential association between overweight/obesity and the likelihood of developing brain tumors, gliomas and meningiomas [29]. Notably, a strong correlation was detected between overweight/obese females and the risk of brain/CNS tumors, meningiomas and gliomas, and a trend towards increased aggressiveness was observed. In contrast, obese male subjects were at increased risk for meningiomas only, indicating gender-associated differences in immune-metabolic pathways [29]. These findings have led researchers to hypothesize whether hypertension, diabetes mellitus and cardiovascular disease–together under the umbrella term “metabolic disorder”–may help predict diagnosis and guide treatment decisions for brain tumors in adults, as well as in children [30][31]. Based on the increasing evidence for an overall increased risk of cancer with obesity, Chambless et al. retrospectively determined the prognostic value of pre-existing obesity and type 2 diabetes mellitus (T2DM) in 171 patients with a confirmed diagnosis of high-grade glioma (HGG) and found significant correlations of increased age, diabetes mellitus and obesity with decreased survival and poor outcome. These findings support the potential utility of a diagnostic and therapeutic framework using molecular inflammatory phenotyping of immune-metabolism signaling, and leptin biology in particular [30]. It is noteworthy that, in addition to obesity, a dysregulated metabolic state associated with underweight may predict poor outcome for HGG patients. Siegel et al. evaluated over- and underweight HGG subjects for overall survival and observed that both metabolic conditions predicted poor outcome, in contrast to other studies that found no differences in therapeutic responsiveness [32]. Various experimental evidence has shown that leptin, ObR and leptin-related genes have been identified in human tissue from various brain tumors including gliomas, metastasis, oligodendrogliomas, hormone-secreting and non-functioning pituitary adenomas.

Hence, further clinical research is needed in order to elucidate the specific characteristics and biological role of the leptin/ObR axis relative to various brain tumor entities [33][34].