"Mustard oil bomb" is present in the order of Brassicales, including many Brassica vegetables that humans consume. Although it has beneficial value to human nutrition and health, plants evolved the mustard oil bomb for their defense. Glucosinolates and myrosinases are the key components of the bomb. In this brief entry, we describe the building-blocks of the mustard oil bomb and how it functions in plant defense against pathogens and insects.

Glucosinolates, once referred to as mustard oil glucosides, have long been part of human life and agriculture due to their influence on the distinctive flavor and aroma of brassicaceous vegetables, and involvement in plant growth and defense [1][2][3]. Glucosinolates occur in members of the Brassicaceae family including cabbage, broccoli, and mustard [4][5] Additionally, they occur in sixteen other plant families for a total of 4700 species [6]. In the past few decades, the importance of these sulfur-containing specialized metabolites has attracted attention because of their health promoting activities (e.g., anti-carcinogenesis) [7][8][9], potential functions in non-host resistance to bacteria and fungi [10][11] and insect defense [3][12][13][14]. Glucosinolates form a network with other metabolic pathways which play important roles in plant growth, development, and interaction with the environment [15][16]. The presence of 36 different glucosinolates in the reference plant, Arabidopsis thaliana [17][18], has inspired extensive research and progress in these amino acid-derived natural compounds, leading to elucidation of their biosynthetic pathways, identification of regulatory factors and mechanisms, as well as revelation of crosstalk with other pathways [3][19][20]. Glucosinolates coexist with myrosinases, which hydrolyze glucosinolates into different bioactive degradation products [21][22] (Figure 1). The specialized glucosinolate–myrosinase system is often referred to as the "mustard oil bomb" for deterring herbivore attack. Here, we describe recent advances made in the "mustard oil bomb", and how they function in plant defense against pathogens and insects. Understanding this unique chemical defense system will not only allow scientists to harness this group of natural metabolites for enhancing pest control in the order Brassicales, but also transfer these natural defense compounds to non-glucosinolate producing plants and crops [23] (in a tissue-specific manner) for enhancing disease resistance and thereby reducing the use of chemical pesticides. 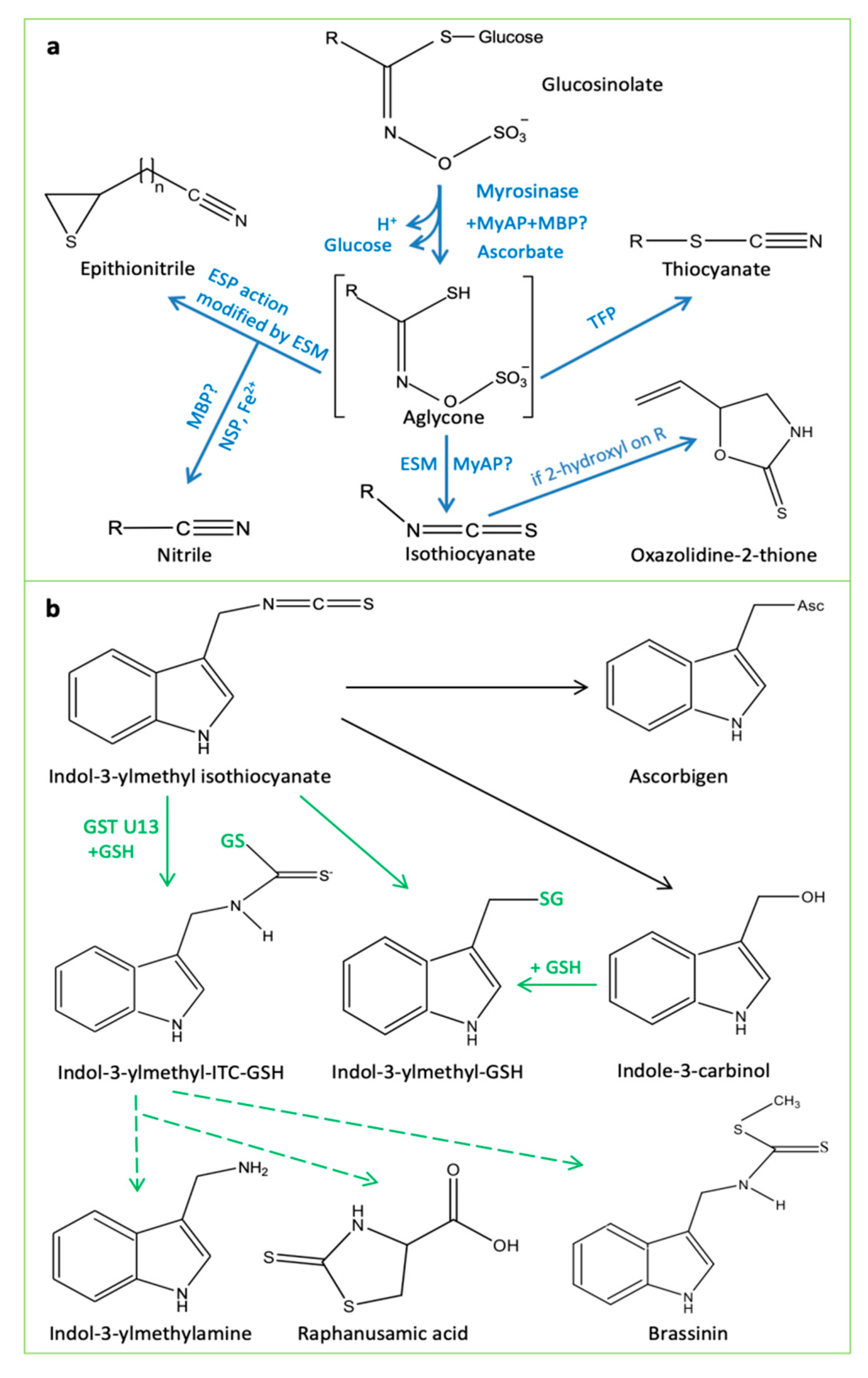 Although intact glucosinolates may confer resistance to certain insects [14], the major roles of glucosinolate degradation products have long been recognized. The enzymes catalyzing glucosinolate hydrolysis are myrosinases (β-thioglucosidases). The glucosinolate–myrosinase system represents a "two-component" defense system, often referred to as the "mustard oil bomb". Upon tissue damage (e.g., by insect chewing), the contact of glucosinolates with myrosinases activates the rapid generation of an unstable aglycone—a thiohydroximate-O-sulfate intermediate which undergoes elimination of the sulfate group, leading to the formation of biologically active chemicals, including nitriles, epithionitriles, thiocyanates, oxazolidine-2-thiones, and/or isothiocyanates (Figure 1) to defend against pathogens and insect herbivores.

Myrosinases are distributed in different types of cells like myrosin cells, guard cells, phloem associated cells, and aleurone-type cells [26][30]. The roles of a bHLH transcription factor FAMA and its interacting protein, SCREAM, in myrosin cell development as well as in guard cell differentiation support the notion that myrosinases originated in stomatal guard cells and were then co-opted into myrosin cells near the veins [30]. There are two types of myrosinases: typical (classical) and atypical. Typical myrosinases are glycosylated, use ascorbate as a cofactor, have catalytic residues QE, and take glucosinolates as the only substrates. By contrast, atypical myrosinases do not require ascorbate, have EE catalytic residues, and take glucosinolates as well as O-glucosides as substrates. In A. thaliana, β-thioglucoside glucohydrolase (TGG) 1–6 are typical myrosinases. Penetration 2 (PEN2), PYK10, and other β-glucosidases (BGLUs) are atypical myrosinases [26][28][31][32]. It should be noted that bacteria and aphids seem to have atypical myrosinases [28]. TGG1 and TGG2 are expressed in shoots [33], while TGG4 and TGG5 are expressed in roots [34]. TGG3 and TGG6 (previously reported to be pseudogenes) were found to be expressed in specific flower tissues [35][36]. However, knowledge of their biological functions is lacking. The TGGs seem to exhibit a low degree of substrate specificity. PEN2 and PYK10 catalyze the hydrolysis of indole glucosinolates in plant defense [10][11][37]. Although PEN2catalyzed indole glucosinolate degradation plays an important role in pathogen defense [10][11], it is not required for the protection of age-related leaf senescence [38]. Another myrosinase, BGLU30, is responsible for decreases of glucosinolates upon exposure to the dark [39][40]. Both BGLU28 and BGLU30 participate in glucosinolate degradation under plant sulfur deficiency [41]. Oxazolidinethionase was recently suggested to be involved in glucosinolate hydrolysis by converting 1,3-oxazolidine-2-thione to 1,3-oxazolidin-2-ones [42]. However, its interaction with myrosinases has not been tested. Several myrosinase-interacting proteins have been shown to affect the formation of different glucosinolate degradation products [26]. For example, a MyAP-like ESM was found to favor isothiocyanate production and protect A. thaliana from herbivory [43]. However, there has been little evidence for complex formation between myrosinases and their interacting proteins in the reference plant. Systematic studies to characterize the protein interactions, signaling pathways that regulate myrosinase activities, and in vivo glucosinolate turnover/degradation products are needed for understanding the specific functions of the "mustard oil bomb" in different biological contexts.

The role of "mustard oil bomb" in insect defense has been studied for more than 100 years, while its role in plant pathogen defense was only realized about a decade ago [10][11][44]. Physical barriers like the cuticle on plant surfaces represent an important plant defense system against pathogens. A. thaliana myrosinase tgg mutants showed disrupted and irregular cuticles. This phenotype correlates with decreased levels of fatty acids and their phytyl esters, glucosinolates, and indole compounds in the tgg1 tgg2 mutant [45]. However, the direct link between myrosinases and cuticle development is not known. Recently, A. thaliana polyunsaturated fatty acid mutants were found to display a cuticle permeability defect and strong resistance to a necrotrophic fungus, Botrytis cinerea. Large amounts of 7-methylsulfonylheptylglucosinolate (7MSOP) were found on the plant surface [46]. It is not clear if 7MSOP may affect cuticle composition and permeability and whether 7MSOP degradation plays a role in fungal resistance. Stomatal pores on the leaf surface represent the major entry points of bacterial invasion, and both myrosinases and glucosinolates are present in stomatal guard cells [26]. Overexpression of TGG1 promotes stomatal closure and delays stomatal opening as an immune response against Pseudomonas syringae [47]. Unlike insect damage-triggered activation by myrosinase, glucosinolates are actively turned over in plant cells and recruited for broad-spectrum antifungal defense [10][48]. Upon fungal attack of A. thaliana, CYP81F2 catalyzes the accumulation of 4MI3G, which is hydrolyzed by the atypical PEN2 myrosinase. The hydrolysis products are then transported to the cell periphery at the fungal entry sites by a PEN3 plasma membrane-resident ABC transporter for antifungal defense [10]. Although this study discussed the potential implication of indole-3-acetonitrile, it did not characterize the bioactive degradation product. Recently, glucosinolate-derived isothiocyanates were found to impact mitochondrial function in fungal cells [48]. Therefore, it is important to profile the glucosinolate degradation products in plant pathogen defense. Another study showed that the PEN2- and PEN3-dependent 4MI3G metabolism is also required for the microbe-associated molecule pattern (MAMP)-triggered defense response, highlighting the link of glucosinolate hydrolytic products as signaling molecules in plant innate immune response to both adapted and non-adapted microbial pathogens [11]. PEN2 mutation led to accumulation of indole glucosinolates [49][50] and, consequently, this mutation prevented plant cells from programmed cell death triggered by flg22 due to the failure to form glucosinolate hydrolysis products [50]. It is intriguing how pathogens and MAMP specifically activate PEN2, but not TGGs in this study. Clearly, TGG1 plays a role in stomatal immunity [47], highlighting the existence of cell-type specific regulations.

The action of glucosinolate degradation in plant defense is affected/regulated by many factors. GSH is not only involved in glucosinolate biosynthesis (Figure 1) but also affects glucosinolate breakdown product formation. Recently, GST U13 was identified as an indispensable component of the PEN2–indole glucosinolate immune pathway. It transfers glutathione to form complexes with unstable breakdown products to yield different protective metabolites against pathogens [24] (Figure 1). In addition, zinc was shown to increase sulfur assimilation, amino acid biosynthesis and, consequently, glucosinolate production [51], and enhance plant immune response [52][53]. Furthermore, iron deficiency induced the expression of a bHLH transcription factor IAA-LEUCINE RESISTANT3 (ILR3), which triggers the expression of genes involved in long-chain glucosinolate biosynthesis. The increase in the glucosinolate levels correlated with enhanced pathogen defense [54]. Moreover, soil type and biofumigation have been shown to be important in "mustard oil bomb"-mediated pathogen defense. For example, sandy soil enhanced the toxic effect of allyl isothiocyanate on a Meloidogyne hapla nematode [55]. Crop rotation with Brassica species and mixtures of rapeseed and mustard have been used in agriculture practice to control plant pathogens, utilizing the "mustard oil bomb" [56][57]. Despite many studies focusing on indole glucosinolates and their degradation products, aliphatic glucosinolates can also be important in plant defense against specific pathogens. The fungus B. cinerea with a broad plant host range showed variable sensitivity to different glucosinolates and their hydrolysis products [58]. Interestingly, a Brassicaceae-specific fungus Alternaria brassicicola has developed adaptation to indole glucosinolates and can cope with their hydrolysis products, but it was strongly deterred by aliphatic isothiocyanates derived from aliphatic glucosinolate breakdown [58]. Therefore, glucosinolate engineering for plant pathogen defense needs to consider the pathogen species and the bioactive metabolites concerned.

4. Role of the "Mustard Oil Bomb" in Plant Insect Defense

Insect herbivores cause more than 20% yield loss to agricultural crops worldwide despite the increased use of pesticides [59]. Crop damage is mostly caused by insects chewing on leaves, fruits, or shoots/roots. In addition, phloem-sucking insects can open entry points for infection by bacteria, fungus, and viruses. For example, citrus greening disease is caused by Candidatus Liberibacter transferred by phloem-feeding psyllids. This disease has almost devastated the Florida citrus industry. The "mustard oil bomb" has specifically evolved in Brassicales to defend against insect herbivores (Figure 2). The pungent glucosinolate degradation products repel insect herbivores. For example, isothiocyanate derived from 2-propenylglucosinolate inhibits the gut cathepsin protease of a corn earworm (Helicoverpa armigera), causing decreased growth and death of the insect [60]. Although insect feeding habits span the entire range from monophagous to highly polyphagous, many studies contrast selected "specialist" and "generalist" insects for simplicity. However, although many glucosinolate-adapted insects are restricted to glucosinolate-containing plants, they are rather polyphagous within that group of ca. 4700 species. These highly glucosinolate-specialized insects combine metabolic handling of the "mustard oil bomb" with behavioral adaptations such as use of glucosinolates and hydrolysis products as cues for oviposition and feeding. This is the case for the Pieris and Plutella species. In Figure 3, we highlight examples of how the "mustard oil bomb" affects generalist insects and the adaptations of specialist insects to the glucosinolate-myrosinase system. 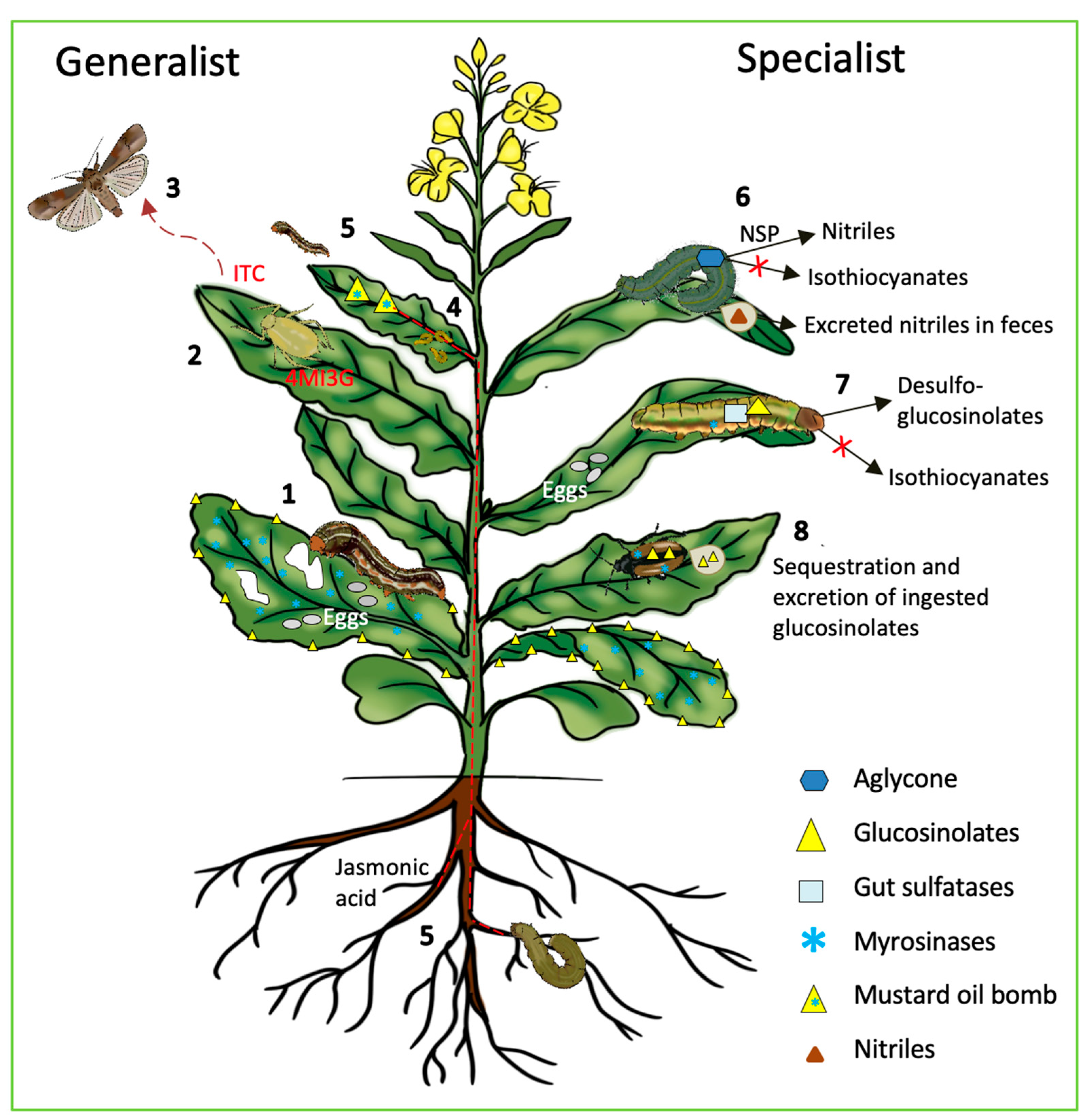 Figure 2. Role of the "mustard oil bomb" in plant interactions with generalist and specialist insects. Generalist insects: (1) Insects adjust their oviposition and feeding away from glucosinolates and myrosinases to avoid triggering the "mustard oil bomb"; (2) Aphid feeding leads to increased synthesis of 4-methoxyindol-3-ylmethylglucosinolate (4MI3G); (3) Volatile isothiocyanate (ITC) repels insects and provides protection to plants; (4) Increase in glucosinolates affects larval growth and development; (5) Systemic defense/priming by jasmonic acid treatment of the roots or root herbivory repels insects from attacking leaves. Specialist insects: (6) Conversion of unstable aglycone from the "mustard oil bomb" to nitriles (less toxic than ITC) in feces in the presence of nitrile specifier protein (NSP); (7) Conversion of glucosinolates to desulfoglucosinolates (by insect sulfatase) that cannot be hydrolyzed by myrosinases; (8) Sequestration and excretion of ingested glucosinolates before being broken down to form toxic products.