A successful phase III trial for the combination of atezolizumab and bevacizumab (the IMbrave150 trial) in advanced hepatocellular carcinoma has recently been reported to show better survival benefit over sorafenib, standard of care for more than 12 years. This is a practice changing results and scientific rationale of this combination, PD-1/PD-L1 antibody plus anti-VEGF inhibitors is very important.

At the European Society for Medical Oncology (ESMO) Asia in November 2019, the positive results of the IMbrave150 study, a trial which compared the effects of the combination of atezolizumab and bevacizumab with those of sorafenib [1], drew attention to the possibility of immunotherapy with a combination of programmed cell death-1 (PD-1)/programmed death ligand 1 (PD-L1) and vascular endothelial growth factor (VEGF) inhibitors. This review outlines the scientific rationale for the therapeutic combination of PD-1/PD-L1 and VEGF antibodies, proof-of-concept results of the phase Ib trial, and results of other phase Ib trials for similar combination strategies.

2. The Rationale Underlying the Combination of PD-1/PD-L1 and VEGF Inhibitors

At tumor sites, VEGF released by hypoxic cancer cells and vascular endothelial cells promotes tumor growth, invasion, and metastasis by increasing neovascularization . Simultaneously, VEGF enhances the mobilization and proliferation of various cells, including regulatory T cells (Tregs), and the release of immunosuppressive cytokines [2][3]. It also enhances the mobilization of tumor-associated macrophages (TAMs) and their polarization to an M2 phenotype. Tregs and TAMs promote tumor growth through the release of VEGF and angiopoietin-2, among other mechanisms [4]. VEGF can also activate myeloid-derived suppressor cells (MDSCs), which in turn release more VEGF [4]. Furthermore, VEGF inhibits dendritic cell maturation and antigen presentation in the priming phase. Thus, VEGF reduces the proliferation and activation of naive CD8+ cells by suppressing dendritic cell activity even in the presence of neoantigens [4] (Figure 1). VEGF-induced Tregs, TAMs, and MDSCs reduce the proliferation and function of CD8+ cells. VEGF also prevents antigen-activated CD8+ cells from infiltrating the tumor tissue through its effects on tumor angiogenesis. In addition, VEGF creates a microenvironment that inhibits the function of T cells in the tumor during the effector phase of the immune response [4]. Furthermore, immunosuppressive cells (Tregs, TAMs, and MDSCs) promote immune escape by releasing immunosuppressive cytokines, including interleukin (IL)-10 and transforming growth factor beta (TGF-β), and by inhibiting dendritic cell maturation and activation, NK cell activation, and T cell activation and proliferation [2][3][5][6][7][8][9][10][11][12][13][14][15][16][17][18][19][20][21][22][23][24][25] (Figure 1). The cancer immunity cycle begins with the uptake and presentation of neoantigens released from necrotic tumor cells by dendritic cells. This is followed by seven steps: (1) tumor antigen release, (2) tumor antigen uptake and presentation by dendritic cells, (3) T cell priming and activation, (4) T cell migration to the tumor, (5) T cell invasion of the tumor, (6) cancer cell recognition by T cells, and (7) attack on tumor cells by T cells, which leads to cancer cell death and release of additional tumor antigens [5] (Figure 2). VEGF promotes immune escape at almost every step of the cancer immunity cycle [6][7][8][9]. Furthermore, hepatic interstitial cells such as Kupffer cells, liver endothelial cells, and hepatic stellate cells are involved in maintaining immune tolerance in the healthy liver and may contribute to the immunosuppressive microenvironment in hepatocellular carcinoma [26]. 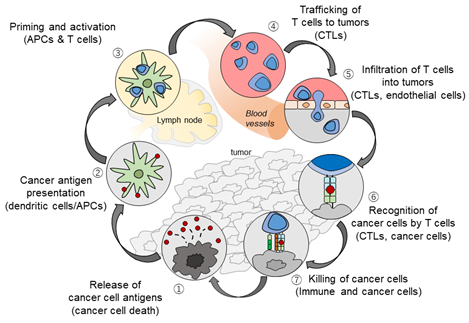 Figure 2. The Cancer-Immunity Cycle (modified from ref. [5] with permission).

The administration of molecular targeted drugs that inhibit VEGF activity, such as multi-kinase inhibitors that inhibit VEGF receptors, leads to an increase in antigen presentation by dendritic cells [8]. These drugs also promote T cell activation in the priming phase [8] and improve the migration of T cells from the lymph nodes to the tumor site by normalizing the tumor vasculature [15]. In addition, these drugs have been found to suppress the generation of Tregs, TAMs, and MDSCs at the tumor site, and to negatively regulate the expression of immunosuppressive cytokines such as TGF-β and IL-10 [10]. VEGF inhibitors therefore reprogram the immunosuppressive tumor microenvironment into an immunostimulatory environment [8]. The administration of PD-1/PD-L1 antibodies under such conditions enhances the antitumor activity of T cells (Figures 3 and 4). As described above, the combination of VEGF and PD-1/PD-L1 inhibitors promotes antitumor immunity according to the four Rs. First, a reversal of the VEGF-mediated inhibition of dendritic cell maturation results in the effective priming and activation of T cells (Recognition) [9]. Second, anti-VEGF antibodies normalize the tumor vasculature and promote the effective infiltration of T cells into the tumor (Recruitment) [15]. Third, anti-VEGF antibodies inhibit the activity of MDSCs, Tregs, and TAMs, leading to the reprogramming of the immunosuppressive microenvironment into an immunostimulatory microenvironment (Reprogramming) [6]. Fourth, PD-1/PD-L1 antibodies enhance the ability of T cells to attack tumor cells (Restoration) (Figure 3). These four Rs lead to efficient cancer immunity and tumor growth inhibition. Proteins released by the killed tumor cells are taken up by dendritic cells, and then processed into tumor antigen peptides that are presented on major histocompatibility complex (MHC) class I molecules, leading to a progression through the cancer immunity cycle and further tumor attacks [5] (Figure 2). As described above, normalization of the VEGF-suppressed tumor microenvironment with molecular targeted agents against VEGF leads to the efficient attack on tumors by activated T cells [27] (Figures 2 and 4). In addition, non-clinical study of lenvatinib, a tyrosine kinase inhibitor (TKI), showed that the inhibition of VEGF activity reduced TAMs and Tregs in the tumor microenvironment, leading to a decrease in TGF-β and IL-10, a decreased expression of T cell exhaustion markers such as PD-1 and TIM-3, and an increased expression of immunostimulatory cytokines such as IL-12 [28][29][30][31]. These findings form the rationale for a trial of the combination of TKIs and anti-PD-1/PD-L1 antibodies. 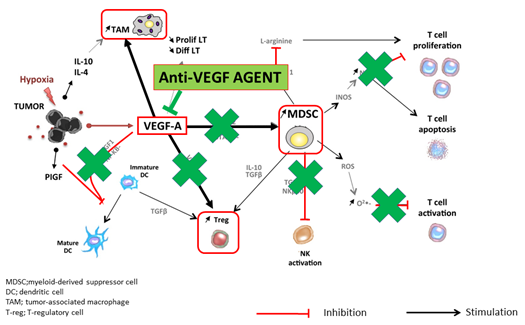 3. Results of Phase Ib Studies of Other Combinations of PD-1/PD-L1 Antibodies and VEGF Inhibitors

In addition to the trial of atezolizumab and bevacizumab described above, other studies are examining the efficacy of combined PD-1/PD-L1 and VEGF inhibition. One such study, the LEAP-002 study, is a phase III clinical trial of pembrolizumab and lenvatinib [32][35][37][38][39][40][41]. This trial is ongoing and the results are highly anticipated. In addition, multiple other clinical trials of immune checkpoint inhibitors and VEGF inhibitors have been completed (Table 1). The number of patients who received pembrolizumab and lenvatinib (n = 67) was lower than the number of patients who received atezolizumab and bevacizumab in Arm A of the phase Ib trial described above (n = 104). The ORR (40.3%), DCR (85.1%), PFS (9.7 months), and OS (20.4 months) of the combination of pembrolizumab and lenvatinib were higher than those of the combination of atezolizumab and bevacizumab [42]. Furthermore, the efficacy of the combination of nivolumab and lenvatinib (evaluated by an independent imaging committee based on RECIST 1.1), which was recently reported at the annual meeting of the American Society of Clinical Oncology, Gastrointestinal Cancers (ASCO GI), was higher than that of the other two combination therapies (ORR, 54.2%; DCR, 91.7%; PFS, 7.4 months; and OS, not reached) [43]. Of course, it is not adequate to compare the results of single-arm trials with different patient populations, small sample sizes, and short observation periods. However, the results are very promising. The ORR and PFS of the combination of camerelizumab and apatinib were 38.9% and 7.2 months, respectively [44]. However, there have been no updated reports on this combination. Moreover, the reported results of the combination of avelumab and axitinib [45] were slightly inferior to those of other combination therapies (ORR, 13.6%; PFS, 5.5 months; and OS, 12.7 months, based on RECIST 1.1). Therefore, at present, the most promising ongoing trial is the LEAP-002 study [40][41]. The decision whether or not to proceed to phase III trials of the combination of nivolumab and lenvatinib has currently drawn attention. In any case, the efficacy of all other combinations of anti-PD-1/PD-L1 antibodies and TKIs or anti-VEGF antibodies, except for the combination of avelumab and axitinib, is higher than that of nivolumab (a PD-1 antibody) alone (ORR, 15%; DCR, 55%; PFS, 3.7 months; and OS, 16.4 months) [34] or pembrolizumab alone (ORR, 18.3%; DCR, 62.2%; PFS, 3.0 months; OS, 13.9 months) [36]. Therefore, combined immunotherapy is expected to shift the paradigm as a first-line treatment option in advanced hepatocellular carcinoma [46].

Table 1. Efficacy of Immune Checkpoint Inhibitors and Combination Immunotherapy with VEGF Antibodies/Tyrosine Kinase Inhibitors in Phase 1b Trials according to RECIST 1.1.