Plants belonging to the monocotyledonous Amaryllidaceae family include about 1100 species divided among 75 genera. They are well known as medicinal and ornamental plants, producing pharmaceutically important alkaloids, the most intensively investigated of which are galanthamine and lycorine. Amaryllidaceae alkaloids possess various biological activities, the most important one being their anti-acetylcholinesterase activity, used for the treatment of Alzheimer’s disease. Due to increased demand for Amaryllidaceae alkaloids (mainly galanthamine) and the limited availability of plant sources, in vitro culture technology has attracted the attention of researchers as a prospective alternative for their sustainable production. Plant in vitro systems have been extensively used for continuous, sustainable, and economically viable production of bioactive plant secondary metabolites. Over the past two decades, a significant success has been demonstrated in the development of in vitro systems synthesizing Amaryllidaceae alkaloids. The present material discusses the state of the art of in vitro Amaryllidaceae alkaloids production, summarizing the authors’ point of view on the development of biotechnological production processes with a focus on the future prospects of in vitro culture technology for the commercial production of these valuable alkaloids.

Plants belonging to the monocotyledonous Amaryllidaceae family include about 1100 species divided among 75 genera (Amaryllis, Galanthus, Leucojum, Narcissus, Haemanthus, Nerine, Hippeastrum, Sternbergia, Clivia, Rhodophiala, Pancratium, Hymenocallis, Crinum, Lycoris, etc.), which are well known, mainly as medicinal and ornamental plants[1][2]. The Amaryllidaceae family is one of the most important alkaloid-producing plant families[3], as the most intensively investigated alkaloids are galanthamine and lycorine[4]. Due to the increased demand for Amaryllidaceae alkaloids (mainly galanthamine) and the limited availability of plant sources, in vitro culture technology has attracted the attention of researchers as a prospective alternative for their sustainable production[5]. Plant in vitro systems have been extensively used for continuous, sustainable, and economically viable production of bioactive plant secondary metabolites[6]. A significant success has been demonstrated in the development of in vitro systems for production of Amaryllidaceae alkaloids[7][8][9][10][11][12]. Optimization of the production process is also well documented, starting with nutrient media optimization[13], development of appropriate bioreactor design[8][14][15], and optimization of the cultivation conditions[11][16][17].

The development of biotechnologies for the production of biologically active substances based on plant cells and tissues cultured under in vitro conditions is a complex and multi-stage process. Algorithms for optimizing and controlling the process of biosynthesis of the target metabolite in the in vitro systems under study should be based on the bioengineering, physiological and phytochemical peculiarities of the particular in vitro culture, as well as on the subsequent analysis of the relationships in the “in vitro system–product” biological system[18][19]. A preliminary requirement for industrially significant yields of target biologically active substances from plant in vitro systems is the development of an efficient cultivation system with appropriately designed bioreactors, as well as unconventional strategies for optimization of the biological systems[20][21].

Based on the summarized results of extensive research in this field over a period of more than 20 years, we propose an integrated approach to process development for production of Amaryllidaceae alkaloids by plant in vitro systems (Figure 1). 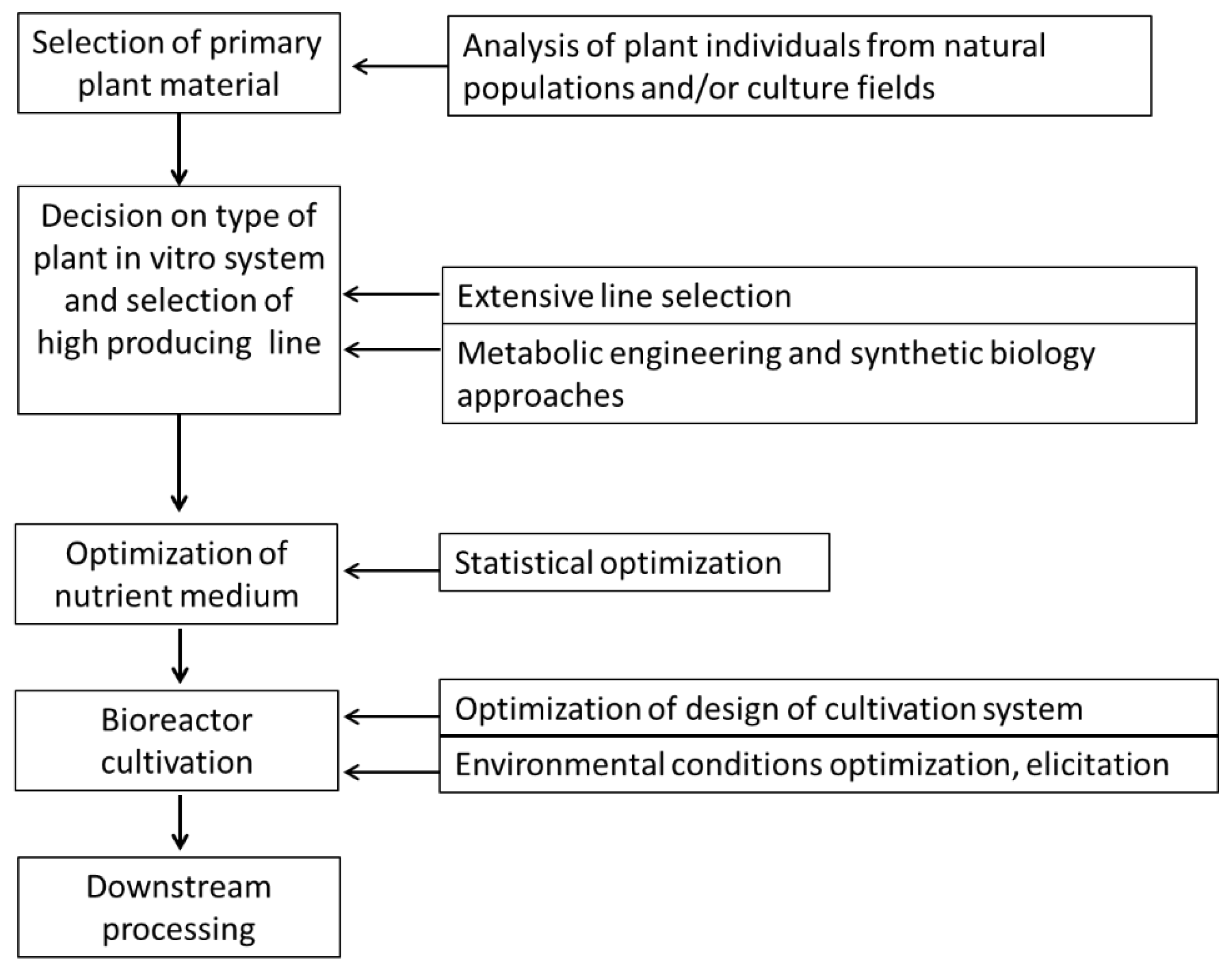 It is postulated that the genetic potential of an intact plant from which explants are extracted to produce in vitro systems directly affects the biosynthetic potential of in vitro systems. This fact is often underestimated by plant biotechnologists, although it is the basis for the successful development of technologies for bioactive secondary metabolite production. It is clear that the selection of the plant individuals further used as primary material for development of a plant in vitro system should be based on systematic screening procedures. Extensive botanical and phytochemical evaluation of the wild populations and/or clone origin of the field crop is required to select the most suitable plant individuals for further in vitro work. In our opinion, there is a need of more thorough investigations on the intrapolulation variations of alkaloids in wild habitats in order to develop and validate procedures for selecting the most productive plant individuals for further introduction in vitro.

Many of the known Amaryllidaceae alkaloids show remarkable biological activities and some of them, galanthamine for example, are already used in medicine. However, the limited amounts found in plants, in combination with the wide diversity in the chemical structures of these alkaloids render their production, isolation and purification very expensive.

Plant in vitro systems are an alternative approach to Amaryllidaceae alkaloid bioproduction. Nowadays, alkaloid yields are still too low and not attractive for commercial production despite the huge progress in the development of an integrated approach for their biotechnological production. It seems this disadvantage could be solved using metabolic engineering for constructing effective plant or microbial systems able to produce a desirable molecule. Possible solutions could be: 1) a combination of chemical synthesis of norcraugsodine as precursor and its conversion into nornarwedine by engineered microbial system; or 2) developing hybrid biosynthetic pathway for Amaryllidaceae alkaloids synthesis by yeasts or in vitro plant systems; or 3) developing hybrid bioprocess systems.