Sulfur (S) is an essential plant macronutrient and the pivotal role of sulfur compounds in plant disease resistance has become obvious in recent decades. These compounds include sulfur containing amino acids such as cysteine and methionine, the tripeptide glutathione, thionins and defensins, glucosinolates and phytoalexins and, last but not least, reactive sulfur species and hydrogen sulfide. SDCs play versatile roles both in pathogen perception and initiating signal transduction pathways that are interconnected with various defense processes regulated by plant hormones (salicylic acid, jasmonic acid and ethylene) and reactive oxygen species (ROS). Importantly, ROS-mediated reversible oxidation of cysteine residues on plant proteins have profound effects on protein functions like signal transduction of plant defense responses during pathogen infections. Indeed, the multifaceted plant defense responses initiated by SDCs should provide novel tools for plant breeding to endow crops with efficient defense responses to invading pathogens.

The role of sulfur in the resistance of crops against fungal diseases became obvious at the end of the 1980s when atmospheric sulfur depositions were so much reduced by clean air acts that sulfur deficiency became a widespread nutrient disorder in Western European agriculture and the infection of crops with certain diseases became increasingly obvious, mostly in Scotland and Germany [1]. The emission of sulfur oxides into the atmosphere was also dramatically reduced in Central Europe at the end of the last century, mainly due to modernization of thermal power stations and to the reduction in fossil fuel combustion. At the beginning of this century, the level of emission of different sulfur oxides (ingredients of acid rain) was reduced by more than 70% as compared to emissions in 1980 [2]. The reduction in anthropogenic sulfur deposition resulted in progressive sulfur deficiency in plant mineral nutrition. Therefore, sulfate salts were applied to fields to cover the sulfur demand of plants. Interestingly, such agricultural field experiments showed that soil-applied sulfur in the form of inorganic sulfate salts can markedly increase the disease resistance of crops against certain fungal pathogens. A significant repressive effect of soil-applied sulfur on the infection of oilseed rape with Pyrenopeziza brassicae, grapes with Uncinula necator, and potato tubers with Rhizoctonia solani was found [3][4][5]. These results led to the development of the concept of sulfur-induced resistance (SIR) [6][7]. This new disease resistance form has also been observed in pathophysiological and biochemical experiments using plants grown under controlled greenhouse conditions, when this phenomenon was described as sulfur-enhanced defense (SED) [8]. The concepts of SIR and SED describe the same phenomenon from different experimental approaches, from an agricultural and a plant biological point of view, respectively. In spite of numerous studies, the mechanisms underlying SIR/SED are, however, far from understood.

Acclimation and adaptation processes are crucial for plants to survive in changing environments and the goal for the plant is to optimize the use of available sulfur to match the demand for growth and development, and resistance to biotic and abiotic stress [9]. Sulfur requirements can vary among plant families. Members of the Brassicaceae are found to be the most sulfur-dependent group of plants, followed by Fabaceae and Poaceae [10]. The primary sulfur source of the plants are inorganic sulfate anions available from the soil [11]. The sulfate anion is taken up from the soil by specialized sulfate transporter proteins, which are localized in the epidermal cells of the roots [12]. Excess sulfate is transported to the leaves and is stored in vacuoles that constitute a large S reservoir for plant metabolism [13]. The transportation of sulfate within or between plant cells is also mediated by sulfate transporters [14]. Sulfate in plant cells is activated to form adenosine 5′-phosphosulfate, a process catalyzed by ATP sulfurylase [15]. The activated sulfate is reduced in a multistep pathway in which eight electrons are added to form sulfide through sulfite as an intermediate form [16]. Sulfide, together with O-acetylseryne (OAS), forms cysteine (Cys), a reaction catalyzed by two enzymes, serine acetyltransferase (SAT) and O-acetylserine(thiol)lyase (OASTL) [17]. In these processes the sulfur atom is ultimately incorporated into Cys, the first organic molecule carrying reduced sulfur and a central hub of SDC biosynthesis in plants [18][19][20][21] (Figure 1). 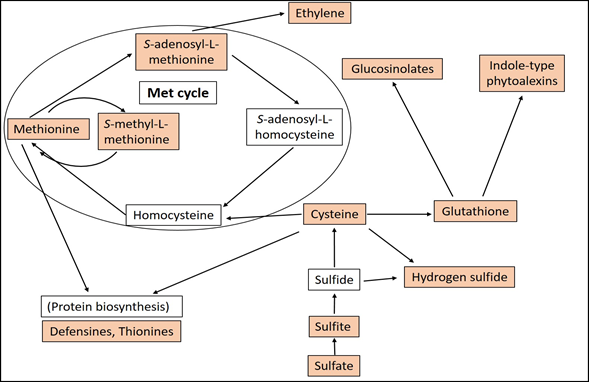 Sufficient levels of sulfur in soils confer the optimal plant uptake of inorganic sulfate salts, a prerequisite for sulfur-containing defense compound (SDC) concentrations required for plant disease resistance responses. Indeed, sufficient sulfur fertilization is generally reflected in higher contents of SDCs, as well as a lower rate of infection compared to sulfur-deprived plants. In spite of the very diverse chemical structures of SDCs, there are some similarities in their modes of action against pathogens. SDCs are instrumental both in pathogen perception and initiating resistance-associated signal transduction pathways. Importantly, these processes are interconnected with various defense responses regulated by plant hormones (in particular, salicylic acid, jasmonic acid and ethylene), NO and reactive oxygen species (ROS). Sulfur-derived metabolites are major participants of plant redox metabolism and post-translational modifications as well as of detoxification processes. In fact, the unique chemical properties of sulfur (S), occurring in a wide range of oxidation states in various compounds, may contribute to the versatile roles of SDCs in plant resistance responses to pathogens. On the other hand, diverse S-containing compounds also have specific roles. An important characteristic of Cys is that it is the central hub of plant sulfur metabolism, in particular, Cys is a precursor molecule of numerous SDCs. Met and the Met cycle is connected to DNA, RNA and histone methylation reactions as well as to the biosynthesis of the plant hormone ethylene and polyamines. GSH participates in antioxidative and detoxification reactions and conducts the signaling of different plant hormones during pathogen infection. Importantly, a self-regulating circuit of H2O2, NO, glutathione and salicylic acid (SA) controls SA-mediated defense responses to bacterial and fungal infections [22][23][24]. Future research should clarify whether the same/similar self-regulating signaling is also responsible for the efficiency of SA-mediated plant defense responses during viral infections. Cysteine-rich peptides like defensins and thionins show direct antimicrobial effects and have additional roles in plant growth and development. Phytoanticipins are preformed SDCs which are already present before the plant is attacked, or which are produced rapidly and spontaneously from a preformed substrate by simple chemical or enzymatic modifications via a pre-existing enzyme. A unique characteristic of RSS is S-sulfhydration or persulfidation of redox-sensitive cysteine residues in various defense-associated proteins.

Successful plant defense against pathogen attack (i.e., resistance) is often associated with enhanced ROS production (oxidative burst). In this regard, the recent discovery of the first extracellular H2O2 receptor (HPCA1) in plants [25] provides a missing link to the in planta operation of so-called ROS waves. These ROS producing waves are initiated upon stress-exposure and confer a rapid, H2O2-mediated cell-to-cell defense signaling. ROS bursts ultimately result in different types of reversible oxidation (disulfide formation, sulfenylation, glutathionylation) of cysteine (Cys) residues on various plant proteins. These plant redox modifications (redoxome) have profound effects on multiple protein functions like catalytic activity, subcellular localization and, last but not least, the signal transduction of plant defense responses during pathogen infections. However, the impact of pathogen-triggered ROS bursts and, in particular, SDCs on the diverse oxidative cysteine modifications of plant proteins is still only partially characterized. The future engineering of these sulfur-associated redox-switches by, e.g., gene editing should enable a temporally and spatially targeted induction of defense responses of crops to a given pathogen.