As glycosyl donors in glycan synthesis, nucleotide sugars take part in processes that are essential for the correct function and survival of living organisms. Glycans are involved in the communication and interactions of cells, and defects in glycosylation may result in serious malfunction, or can even be fatal. An alteration in glycosylation can indicate a pathological condition, such as cancer. Recently, hexosamine pathway producing UDP-N-acetylglucosamine (UDP-GlcNAc) has been identified as an important target to influence glycosylation processes.

Hence, enzymes that are involved in the biological processes of nucleotide sugars are potential targets of drug development, and nucleotide sugar analogues are potential inhibitors of these processes. As the structure and composition of bacterial carbohydrates differ markedly from those found in the human body, bacterial processes are especially important as targets. Furthermore, foreign or altered glycans activate the defense mechanisms, and oligosaccharide sequences have been studied in vaccines against bacterial or fungal infections, as well as cancer.

Considering these crucial roles of glycans, efficient methods for the synthesis of oligosaccharides are required. Natural and modified nucleotide sugars are needed as starting materials in the synthesis and as inhibitors of biological processes. Efficient synthetic and diagnostic methods are needed, and information on the reactivity and on reaction pathways under biological and chemical conditions support the development of these methods. Various aspects of nucleotide sugars have been studied over the years by scientists working on different fields. Different worlds do not always meet, and this review attempts to bring together the biology and chemistry of nucleotide sugars by concentrating on the molecules and on the details of their reactions.

While the enzymatic glycosylation reactions involve an intermolecular nucleophilic substitution at the anomeric carbon of the sugar part, in chemical reactions nucleotide sugars undergo a substitution at the anomeric carbon only under acidic conditions, where the oxocarbenium ion formed upon departure of the diphosphate moiety is stable enough to exist as an intermediate. Under neutral and alkaline conditions, nucleotide sugars react by an intramolecular substitution at the phosphate, and two monophosphates are formed as products. The difference in the reactivity is probably one of the reasons why nucleotide sugars are usually not used as glycosyl donors in the chemical synthesis of oligosaccharides, even though the serve as glycosyl donors in biological glycosylations.The difference also underlines the importance of stabilization of oxocarbenium-like species in enzymatic reactions.

Under neutral and alkaline conditions, a neighboring HO group of the sugar attacks the phosphate, and a nucleoside monophosphate and a 1,2-cyclic sugar phosphate are formed (Scheme 1, A). A cis orientation of the nucleophile and the phosphate is required for an efficient reaction; GDP-mannose with the adjacent OH in the trans position reacts more slowly, releasing GDP as the sole UV-active product (Scheme 1, B). A nucleophilic attack of the adjacent 2-OH on C1 has been proposed as the mechanism. Interestingly, GDP-mannose behaves differently also in the enzymatic reaction, even though an intramolecular nucleophile is not involved.

Apart from CDP-neuraminic acid (CDP-Neu5Ac in Scheme 2), nucleoside diphosphate sugars react slowly in aqueous solutions. Half-lives of 80 and 40 days have been determined for the cleavage of UDP-Glu and UDP-Gal at pH 7 at 50 °C. Acids enhance the reaction by protonating the phosphate group, and bases increase the nucleophilicity of the attacking OH group by deprotonation. A second-order rate constant of (1.6 ± 0.2)·10−2 dm3 mol−1 s−1 at 25 °C has been determined for the base-catalyzed cleavage of UDP-Gal.

CDP-Neu5Ac and CMP-Neu5Ac (Scheme 2) are significantly more reactive than the nucleotide sugars described above. The fastest decomposition is observed under acidic conditions: CDP-Neu5Ac decomposes nearly completely in half an hour at room temperature in 60% acetic acid. CMP-Neu5Ac is only a little less reactive. For comparison, the half-lives of UDP-Gal, UDP-Glc, and GDP-Man in 10 mM HCl at 50 °C are 1, 4, and 8 h, respectively. While the reactivity of CDP-Neu5Ac decreases only a little as the pH increases, the reactivity of CMP-Neu5Ac depends more clearly on pH below pH 7. A hundred-fold reactivity difference between the two sialic acid derivatives is observed at pH 8. 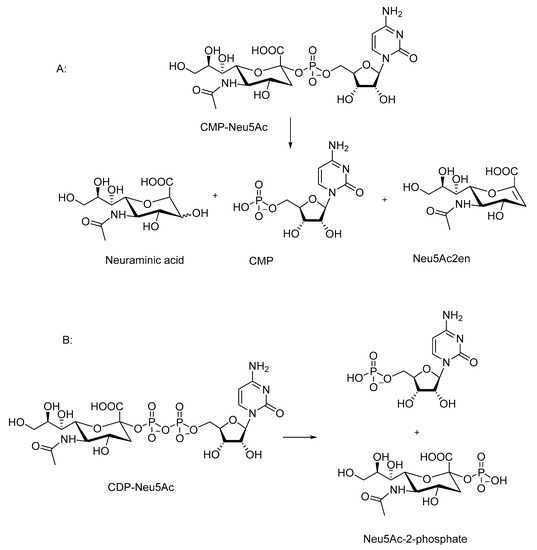 The numbers presented above give a rough estimation of the reactivity of sialic acid derivatives in comparison to that of other nucleotide sugars. Thus, CMP-Neu5Ac and CDP-Neu5Ac are approximately 250 and 25,000 times as reactive under neutral conditions as UDP-Gal, respectively. The reactivity difference has been attributed to the presence of the carboxylic acid group that enhances both the acid-catalyzed reaction with the oxocarbenium ion intermediate, as well as the substitution at the phosphorous.

The decomposition of CMP-Neu5Ac yields 5′-CMP, Neu5Ac, and 2-deoxy-2,3-dehydro-N-acetylneuraminic (Neu5Ac2en) as the products (Scheme 2A). The proportion of Neu5Ac2en producing elimination increases at a higher pH. In 30% ammonium hydroxide at 52 °C, the elimination accounts for approximately 40% of the cleavage reaction. The decomposition of CDP-Neu5Ac results in a formation of two monophosphate products (Scheme 2B).

Various metal ion catalysts have been shown to enhance the cleavage of nucleotide sugars. The catalytic activity of Cu complexes is significant even under neutral conditions. The reaction of UDP-Glc is enhanced in the presence 5 mM CuBiPy at pH 7and 50 °C by a factor 104 and at least a 1000-fold rate enhancement is observed for GDP-Man. The products of the metal ion-promoted reactions are similar to those formed in alkaline cleavage.

The rate of the metal ion-promoted reactions depends also on pH. While Mn2+ promotes the cleavage of UDP-Glc under neutral conditions, rate enhancement by Mg2+ is observed only at a higher pH. At pH 9 and 37 °C, the concentration of UDP-Glc is halved in two hours. Electrophilic catalysis by metal ion catalysts most likely contributes significantly to the catalysis by metal ions and their complexes. However, the fact that the structure of the nucleotide sugar affects the catalytic activity suggests that the catalysts may interact also with the nucleophile.