The mitochondria are mostly abundant in the heart, a beating organ of high- energy demands. Their function extends beyond being a power plant of the cell including redox balance, ion homeostasis and metabolism. They are dynamic organelles that are tethered to neighboring structures, especially the endoplasmic reticulum. Together, they constitute a functional unit implicated in complex physiological and pathophysiological processes. Their topology in the cell, the cardiac myocyte in particular, places them at the hub of signaling and calcium homeostasis, making them master regulators of cell survival or cell death. Perturbations in mitochondrial function play a central role in the pathophysiology of myocardial remodeling and progression of heart failure.

The heart is an organ requiring high-energy to meet its metabolic demands and has the plasticity to undergo remodeling, hypertrophy or atrophy, in response to variable stimuli [1]. Mitochondria, which are considered the powerhouse of the cell, are mostly abundant in the heart, and have the densest cristae. Their function extends beyond energy production to include participation in metabolism, signaling and redox balance and ion homeostasis. Thus, they are master regulators of cell survival or cell death [2].

The heart has the flexibility to switch its preference in substrate utilization and metabolism based on its energetic need/demand and substrate availability. Under normal conditions, 60–90% of adenosine triphosphate (ATP), generated by oxidative phosphorylation, comes from fatty acid utilization and β-oxidation and the remaining from glucose metabolism. Ketones are substrates that are utilized in periods of prolonged starvation. Metabolic remodeling, extending from altered mitochondrial dynamics and function to impaired substrate utilization and metabolism, is an important pathophysiological process that plays a role and contributes to myocardial remodeling in heart failure (HF).

2. Mitochondrial Morphology and Dynamics in HF

Mitochondria are dynamic structures that undergo cycles of fission and fusion, which is essential for mitochondrial biogenesis and mitochondrial quality control [3][4]. Damaged mitochondria that undergo fission and are unable to fuse again are eliminated and recycled via mitophagy [5]. The balance between mitochondrial fission and fusion is maintained under normal conditions, and is orchestrated by mitochondrial fusion proteins at the outer mitochondrial membrane (OMM): mitofusin 1 (MFN1) and mitofusin 2 (MFN2) [6], and inner mitochondrial membrane (IMM): optic atrophy 1 (OPA1) [7]; and by mitochondrial fission proteins: dynamin related protein 1 (DRP1) [8] and fission 1 at the OMM. It is not yet clearly understood what promotes mitochondrial fission at the IMM. Figure 1A is a transmission electron photomicrograph of a normal left ventricular (LV) myocardium. Please refer to figure legend for details. In HF, the balance tips towards mitochondrial fission and mitochondrial fragmentation, Figure 1B. Mitochondrial fission and fragmentation is observed as early as week 2, following ascending aortic banding in rat [9]. Mitochondrial fragmentation worsens as the animals transition from a compensated phenotype into a remodeled overt systolic HF phenotype [9], known as HF with reduced ejection fraction (HFrEF). In addition to the decrease in mitochondrial area and mitochondrial cristae density, derangement in mitochondrial distribution is observed. The fragmented intermyofibrillar mitochondria appear to be arranged in clusters within the adjacent sarcomeres, a finding that is observed early on in pathological hypertrophy in transition to HFrEF [10], Figure 1B. Moreover, mitochondria at different stages of vacuolar degeneration are encountered where there is gradual loss of mitochondrial cristae and mitochondrial swelling, eventually leading to rupture of the OMM at a more advanced stage of mitochondrial vacuolar degeneration [11][12], Figure 1B. Stages of mitochondrial vacuolar degeneration, described elsewhere [11], are shown in Figure 2. Similar mitochondrial morphological changes have been described with mitochondrial calcium overload [13][14], and in cells undergoing apoptosis [11][15]. These mitochondrial morphological changes were also observed in human HF and were more severe in patients with HFrEF, compared to patients with HF and preserved ejection fraction (HFpEF) related to ischemic heart disease or severe aortic stenosis [12]. Moreover, within the areas of clustered mitochondria, often numerous lysosomes are observed fusing with the surrounding mitochondria pointing towards active mitophagy [12][14], Figure 1B. Molecular markers of autophagy and mitophagy are upregulated early on in compensated pathological hypertrophy or HFpEF, and intensify with the progression to HFrEF [9][12][16]. At the initial stage of remodeling, such as at compensated hypertrophy, mitophagy may play a cardioprotective role by maintaining mitochondrial quality control. However, with the advancement of cardiac remodeling and activation of signaling pathways that induce mitochondrial dysfunction and apoptosis, the mitophagy system becomes overwhelmingly saturated and insufficient to maintain a healthy mitochondrial population [16][17]. This is supported by the observation that the mitochondria in HFrEF are at a relatively advanced stage of vacuolar degeneration compared to a normal or phenylephrine-stressed adult cardiac myocyte for 2 h, and HFpEF, Figure 3A–C. The functional capacity of the HFrEF patients, from whom the subepicardial biopsy was obtained, were in the category of New York Heart Association (NYHA) class III and IV, compared to HFpEF patients who the majority were classified as NYHA class II or IIb [12]. Moreover, there is dysfunction of the lysosomes due to peroxidation of the lysosomal membranes and accumulation of lipofuscin material within the lysosomal body [18][19][20], which renders the autophago-lysosomal system dysfunctional. 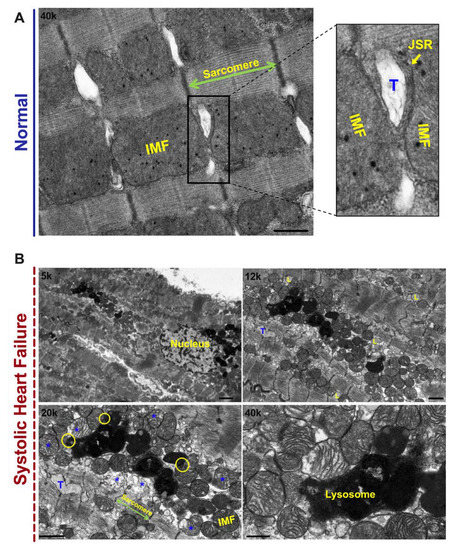 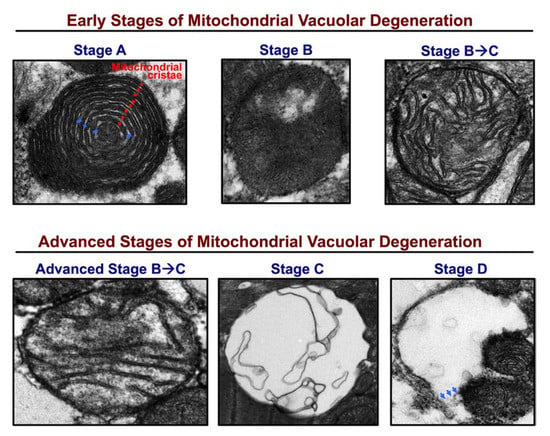 The etiology of mitochondrial clustering, molecular mechanisms driving it and its (patho)-physiological effect on mitochondrial function and inter-organelle tethering and signaling in HF has not been elucidated. Previous work has shown that the clustered mitochondria protein homolog (Cluh), which is an mRNA-binding protein involved in proper cytoplasmic distribution of mitochondria, binds mRNAs of nuclear-encoded mitochondrial proteins in the cytoplasm and regulates transport or translation of these transcripts close to mitochondria, playing a role in mitochondrial biogenesis and oxidative capacity [21]. Mice deficient in Cluh failed to adapt to conditions of nutrient deficiency, such as during starvation or transition from fetal to neonatal period, and died shortly after birth [22]. In these mice, Cluh deficiency was found to affect mitochondrial respiratory function, mainly electron transport chain complex I activity, mitochondrial DNA content and cristae density were decreased in both liver and heart [22]. Similar findings were observed in HeLa cells [23]. Our unpublished proteomic data suggest that Cluh expression is downregulated in a rat HF model of moderate remodeling and early systolic dysfunction (MOD) and in HFrEF. It would be interesting to explore the role of Cluh in the pathogenesis of HF and mitochondrial dysfunction in future studies.

Changes in the expression and post-translational modification (PTM) of mitochondrial dynamic proteins (MDPs) are evident in HF. Previous work suggests that expression of MFN1 and MFN2 is increased in patients with both ischemic and non-ischemic cardiomyopathies [24]. MFN2 expression was unchanged in rat pressure overload (PO)-induced HF model and in LV subepicardial biopsies from patients with HFpEF and HFrEF related to ischemic heart disease (IHD) or severe aortic stenosis (AS) compared to normal [12][14]. Recent work suggested a role for MFN1 PTM in HF. Phosphorylation of MFN1 by beta II protein kinase C (βIIPKC) at serine 86 resulted in partial loss of its GTPase activity and in build-up of fragmented and dysfunctional mitochondria in HF [25]. Inhibition of MFN1-βIIPKC association by a peptide called, SAMβA, restored mitochondrial morphology and function and improved cardiac contractility in a rat model of HF [25]. MFN2 knockout has been shown to be cardioprotective in the acute phase of ischemia reperfusion injury by attenuating MFN2-mediated tethering of the sarcoplasmic reticulum to neighboring mitochondria, therefore reducing mitochondrial calcium overload in a MFN1 and MFN2 double knockout (DKO) mouse model [26]; although the mitochondria were fragmented with decreased mitochondrial oxidative capacity and impaired myocardial contractile function in the MFN DKO mice, compared to WT mice [26]. Moreover, stress induced phosphorylation of MFN2 at serine 27 by the mitogen-activated protein kinase, JNK, promoted MFN2 proteasomal degradation and facilitated mitochondrial fragmentation and apoptosis [27]. OPA1, beside its role in fusion of the IMM, has been shown to play a protective role by maintaining mitochondrial cristae integrity and morphology; thus, playing a role in mitochondrial respiratory efficiency [28]. It has been shown that OPA1 expression was decreased or unchanged in human HFrEF [12][24]. Additionally, it has been shown that the mitochondrial death and mitophagy marker, BNIP3, binds and inhibits OPA1 via its transmembrane domain promoting mitochondrial fragmentation and apoptosis [29]. Moreover, BNIP3 knockdown in phenylephrine stressed cardiac myocytes enhanced DRP1 phosphorylation at serine 637, therefore promoting its cytoplasmic translocation [14]. DRP1 expression was increased in human HFrEF [12][24]. These data suggest that MDPs are tightly regulated by a series of signaling pathways that regulate their transcription, PTM and proteasome-dependent degradation; therefore, modulating mitochondrial morphology, dynamics and function [30]. It remains unclear which of the MDPs is a major player in mitochondrial dysfunction and whether altering MDPs expression versus their PTM would be a better therapeutic strategy in HF. For instance the mitogen activated protein kinase, JNK, which is activated under many conditions of cardiac stress [9][31][32], phosphorylates MFN2 at S27 promoting its degradation, and is a key player in myocardial remodeling by contributing to endoplasmic reticulum (ER) stress and mitochondrial induced apoptosis [9][33][34]. Similarly, protein kinase A (PKA) and Calcineurin have opposing effects, and share many target proteins, such as DRP1 [35][36], Phospholamban (calcium cycling), Troponin I (contractile protein) and glycogen synthase, and are key players in the initiation and propagation of cardiac remodeling and progression to HF [37][38].

Mitochondrial oxidative phosphorylation is a coupled process between the tricarboxylic acid (TCA) cycle and the electron transport chain (ETC) system. Byproducts of this process are the generation of adenosine triphosphate (ATP), carbon dioxide and reactive oxygen species (ROS). The majority of ROS are produced by the ETC complexes I and III in the form of oxygen radicals, which are reduced to hydrogen peroxide (H2O2) by the mitochondrial manganese superoxide dismutase (SOD2). H2O2 is then reduced to water by the mitochondrial or cytosolic antioxidant systems, such as catalase, thioredoxin-peroxidase and glutathione-peroxidase. Calcium is a key second messenger that orchestrates the interplay of mitochondrial redox and energetics with the excitation contraction coupling [39]. Increases in cytosolic and mitochondrial calcium transients have been observed upon acute stimulation of the cardiomyocyte with isoproterenol and increases in energetic demand. This serves as a stimulus to activate enzymes in the TCA cycle and ETC complexes, such as pyruvate dehydrogenase, NAD+-dependent isocitrate dehydrogenase, α-ketoglutarate dehydrogenase and ETC complexes I and III [40], respectively. Therefore, the same signal that stimulates muscle contraction, also stimulates ATP production to meet the higher energetic needs/demands, but at the expense of increased ROS generation. Crosstalk exists between calcium and ROS signaling systems. Together, they can regulate and fine tune cellular signaling networks [41]. Derangements in either of the aforementioned signaling systems would adversely affect the other, and will have detrimental consequences on cellular fate and survival [41], as we discuss below.

Previous work suggested that mitochondrial biogenesis and oxidative capacity were preserved in patients with HFpEF [12], or enhanced in pathological compensated hypertrophy [52][53]. A decline in mitochondrial content and oxidative capacity is observed in rodent models upon transitioning from a compensated state to moderate remodeling and early systolic dysfunction [53]. Cytochrome C oxidase activity is decreased in early systolic dysfunction, along with a decrease in expression of the ETC complexes I and IV [14]. Transitioning to HFrEF is marked by a decrease in mitochondrial biogenesis and PGC-1α expression, along with decrease in expression of the ETC complexes. These findings were observed in an animal models and in human HFrEF [12][52]. Another mechanism of decreased oxidative capacity in HF is PTM of mitochondrial proteins, mainly hyperacetylation. Increased mitochondrial protein acetylation has been observed in animal models and in human HFrEF [54][55] affecting proteins related to fatty acid beta-oxidation, TCA cycle and ETC complexes leading to decrease in their activity. The etiology of mitochondrial protein hyperacetylation in HF is poorly understood and is speculated to be related to the presence of excessive acyl-CoAs and reduced protein deacetylation by the sirtuin family of NAD+-dependent deacetylases, mainly SIRT3 [56], which is the predominant deacetylase, and SIRT5. Our unpublished shotgun proteomic data support above findings and suggest that both, SIRT3 and SIRT5, were downregulated in rat HFrEF phenotype, but not in pathological compensated hypertrophy or in early systolic dysfunction and moderate remodeling.