Exhaled breath analysis is a non-invasive method to study lung diseases, and electronic noses have been extensively used in breath research.

Studies with electronic noses have proved that the pattern of exhaled volatile organic compounds is different in COPD.

More recent investigations have reported that electronic noses could potentially distinguish different endotypes (i.e., neutrophilic vs. eosinophilic) and are able to detect microorganisms in the airways responsible for exacerbations.

This entry reviews the published literature on electronic noses and COPD and help in identifying methodological, physiological, and disease-related factors which could affect the results.

Chronic obstructive pulmonary disease (COPD) is a common disorder of the respiratory system which is characterised by a progressive airflow limitation caused by exposure to noxious particles, usually tobacco smoke, in susceptible individuals[1]. However, other factors, such as premature birth, frequent childhood infections, asthma, or passive smoking, could also contribute to COPD [1]. The disease may affect the large airways, respiratory bronchioles, and lung parenchyma, however the extent of the involvement of different lung regions may vary[2] (Figure 1). 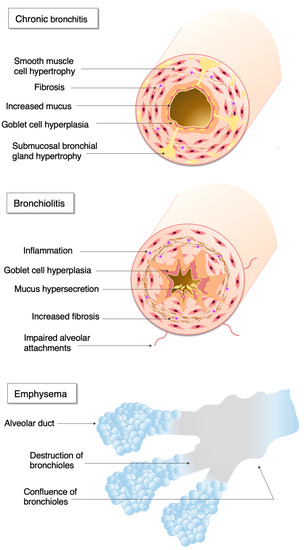 Large airway disease is characterised by mucus hypersecretion, ciliary and epithelial dysfunction, mucosal and submucosal inflammation, as well as enhanced bronchial blood flow. Patients may present with symptoms of chronic productive cough or chronic bronchitis. Most of these patients have small airway disease, which is characterised by airway inflammation, peribronchial fibrosis, and subsequent small airway narrowing. Parenchymal involvement is termed emphysema, and it is characterised by progressive loss of the lung tissue, impaired oxygen intake, and carbon dioxide removal. People with small airway disease and emphysema often complain of progressive shortness of breath. Although widely recognised as a progressive disease, the activity of disease varies largely between patients. Around half of patients have a rapid (≥50 mL/year loss) decline in forced expiratory volume in the first second (FEV1), a marker quantifying airway obstruction[3], and around 30% are prone to acute exacerbations, major events leading to health deterioration and associated with high healthcare burden and mortality[4].

COPD is diagnosed based on medical history, symptoms, and lung function showing fixed airflow obstruction. Although the diagnosis, especially the differential diagnosis from other lung diseases (i.e., asthma, bronchiectasis), is sometimes difficult, in most cases it can be made based on simple and cheap pulmonary function tests. It is important to have reliable biomarkers which could differentiate patients with eosinophilic airway inflammation and reflect on disease activity (i.e., predict lung function decline and future exacerbations). This is essential clinical information, as inhaled corticosteroids (ICS) seem to be more effective in patients with raised airway eosinophils [5], as well as patients with a high exacerbation burden[6]. On the other hand, in some patients recurrent exacerbations are maintained by colonising bacteria and patients may benefit from prophylactic antibiotic treatment[7]. Hence, biomarkers reflecting on bacterial colonisation and specifying bacteria would have significant clinical value. Similar to stable disease, acute exacerbations are also heterogeneous and patients may benefit from tailored treatment depending on the inflammatory profile[8] and infectious cause[9].

Exhaled breath analysis is a widely used technique for investigating airway diseases. It is totally harmless, and therefore can be performed even in very frail patients and during acute breathlessness, such as in exacerbation. Therefore, it has a great yet not fully explored clinical potential to distinguish patients with different inflammatory endotypes and airway microbiology. One of the most important limiting factors is the lack of standardisation[10] and the effect of various endogenous (airway calibre, comorbidities, etc.) and exogenous factors (diet, smoking, pollution) which may limit their use. Traditionally, techniques assessing breath biomarkers are divided into methods investigating volatile and non-volatile particles[10] and the measurement of breath temperature[11]. In this review, we will focus on the measurement of volatile organic compounds (VOCs) using electronic noses in COPD.

As described above, the composition of exhaled VOCs in could be altered due to several endogenous and exogenous factors. This chapter summarises the published evidence for case-control studies (Table 1). First of all, it has to be emphasised that the electronic nose signal in COPD seems to be stable, with a within-day reproducibility of 0.80 and an overall mean between-day reproducibility around 0.70[12][13][14]

Most studies have reported a good (AUROC or cross-validation value ≥0.70) to an excellent discrimination performance (≥0.90) of electronic noses in COPD regardless of comparator. However, it seems that this performance strongly depends on the number of control groups tested[26]. Notably, most of the studies conducted on multiple groups are generally underpowered with small sample size. For these reasons, targeting the optimal population represents a major issue deserving further investigation. An external validation set is highly recommended to strengthen the reliability of the results[10].

In most one-to-one comparison analyses, electronic noses have shown a good diagnostic ability, being able to discriminate COPD from healthy controls[13][16][15][21]and other chronic conditions carrying respiratory symptoms usually requiring differential diagnosis with COPD (i.e., asthma, obstructive sleep apnoea, lung cancer, chronic heart failure, etc.). Using Cyranose 320 and LDA, Fens et al. were able to discriminate patients with COPD from non-COPD smokers with a cross-validation value of 0.66. Interestingly, patients with COPD were not different from non-smoker controls[13]. In contrast, using Cyranose 320 and LDA as well, Sibila et al. could distinguish patients with COPD from non-COPD control subjects (77% ever-smoker) with a much higher cross-validation value (0.83-0.88) [15]. Using the same device and classification method, the study by Shafiek et al. reported an accuracy of 72% in classifying patients with stable COPD and healthy controls[16]. In a very recent study using the same device, adding support vector machines models to canonical discriminant analysis, a cross-validation value of 1.00 was achieved for the comparison between patients with COPD and healthy subjects[21]. COPD can be discriminated from chronic heart failure with an externally validated accuracy of 0.69, a sensitivity of 0.63, and a specificity of 0.74[28], independently from age, smoking habit, and comorbidities, which have an impact on the VOC pattern[29]. Likewise, Fens and colleagues obtained an externally validated accuracy of 0.95, a sensitivity of 0.91, and a specificity of 0.94 in discriminating COPD smokers and former smokers from asthmatic patients with LDA[23]. Interestingly, the difference in VOC pattern between COPD and asthma cannot be attributed to the type (i.e., reversible or not) or degree of airways obstruction, because the externally validated discriminative accuracy remained almost the same [23]; these results suggest that COPD has a specific VOC pattern production, independent from the degree of airway obstruction. Regardless of smoking, COPD can be discriminated from OSA with an accuracy of 0.75-0.80[25][26] and a sensitivity and specificity of 0.75, while the presence of both diseases in the same patient (i.e., overlap syndrome) cannot be clearly distinguished by COPD[25]. Likewise, COPD can be discriminated from lung cancer[18][22][30]. In all these studies, the participants performed exhaled breath analysis apart from spirometry and observed some restrictions in eating, smoking, and taking medication before the test, limiting its applicability in clinical practice. A combination of a metal-oxide semiconductor e-nose with a spirometer (i.e., “SpiroNose”, AMC, Amsterdam; Comon-Invent BV, Delft, The Netherlands) has represented a paramount step in the applicability of e-nose in clinical practice, allowing real-time analysis and eliminating the VOC collection and storage step. The study of De Vries and colleagues has demonstrated that SpiroNose is able to discriminate COPD Global Initiative for Obstructive Lung Disease (GOLD) stages II-IV from healthy controls, asthma, and lung cancer with a AUROC of 0.80, 0.81, and 0.88 [20], respectively, without the need for restrictions before the test.

Alpha-1 antitrypsin (AAT) deficiency is a relatively rare genetic cause for COPD. In a pilot study, an electronic nose was applied in the discrimination of 10 patients with AAT deficiency, 23 patients with COPD without AAT deficiency, and 10 healthy subjects. The authors concluded a good discriminative cross-validated accuracy based on LDA[27]. They also supplemented 11 AAT-deficient patients with human purified AAT and found a significant change in “breathprint”. This change could be either due to the direct effect of AAT on the exhaled VOC pattern or may represent immunological alterations due to the augmentation therapy [27].

The “breathprint” was associated with the exercise capacity of COPD patients, expressed by the six minute walking distance and the disease-specific prognostic index BODE (Body mass index, Obstruction, Dyspnea, and Exercise), and was be able to predict those patients with a steeper decline more accurately than GOLD classification with PLS-DA[31], helping clinicians tailor their interventions and follow up and also helping diagnose frail patients who could benefit from palliative care.

Although the technique is promising and is cheaper and easier to use than GC-MS, electronic noses are still more expensive than the current diagnostic spirometry and they warrant some expertise. In addition, due to the unspecific nature of the signals, they cannot easily be interpreted in clinical practice. Therefore, their role alone would be limited in diagnostic and differential diagnostic settings. However, their combination with traditional spirometry has merit in identifying endotypes and differentiating COPD from asthma with fixed airway obstruction[13][22][24]. Airway sampling using invasive techniques, such as bronchoscopy is not always feasible in COPD, and even sputum induction hold risks for patients with very severe COPD[32]. Although endotyping and monitoring airway inflammation hold essential clinical value[5], the currently used surrogates, such as blood eosinophils, only weakly correlate with their percentages in sputum[33]. In addition, it has recently been suggested that temporal variation, rather than the baseline values of blood eosinophilia, better predicted treatment response to inhaled corticosteroids in COPD[34]. The monitoring of airway inflammation via electronic nose holds clinical potential, and future studies should focus on this.