Coenzyme A (CoA) is synthetized from pantothenic acid (commonly known as vitamin B5). The importance of CoA as a carrier of acyl residues in cell metabolism is well understood. Coenzyme A participates in more than 100 different catabolic and anabolic reactions, including those involved in the metabolism of lipids, carbohydrates, proteins, ethanol, bile acids, and xenobiotics.

Coenzyme A (CoA or CoA-SH) is an essential cofactor of cellular metabolism in all living organisms. Pantothenic acid (Pan, commonly known as vitamin B5) is the only nutritionally essential component involved in the synthesis of CoA, which is required for many biochemical processes (see below) and for the synthesis of an acyl carrier protein that is involved in fatty acid biosynthesis [1][2]. Moreover, Pan triggers immune cells to produce cytokines [3].

The name of Pan is derived from the root word pantos, which means “everywhere.” The widespread availability of Pan in the diet (both in products of animal, including milk, and plant origin) means that, in humans, Pan deficiency occurs largely due to severe malnutrition with combined vitamin deficiencies. However, it was recently found that cerebral Pan levels are significantly decreased compared to the control values in patients with Huntington’s disease [4]. Moreover, Pan deficiency results in greying hair in rats and other animals. Studies have shown that vitamin B5 supplementation with calcium pantothenate can promote grey hair darkening [5]. Neither the toxicity nor the upper intake level have been established [6]. However, in some individuals consuming very large doses of Pan supplements (approximately 10 g per day), gastrointestinal distress and diarrhea have been observed [2].

The unique chemical structure of CoA-SH allows it to be used to activate carboxylic acids involved in both catabolic and anabolic reactions. Generally, in humans, CoA-SH is required for (a) chemical reactions that generate energy from fat, carbohydrates, protein and catabolism of ethanol; (b) biosynthesis of fatty acids (necessary for biosynthesis of: triacylglycerols, phospholipids, sphingolipids), cholesterol, acetylcholine, prenyl moieties, bile acids, ketone bodies, heme, melatonin, glycosaminoglycans, glycoproteins, gangliosides, proteoglycans, and others) [7][8]; (c) regulation of metabolism (direct allosteric regulation of pyruvate dehydrogenase kinase-PDK, carnitine palmitoyltransferase 1—CPT1 and indirect regulation of carbamoyl phosphate syntethase I); and (d) gene expression (e.g., histone acetylation) [9]. Moreover, CoA-SH and its thioester derivatives (mainly acetyl-CoA and benzoyl-CoA) participate in detoxification reactions during which compounds are formed and then excreted in urine, e.g., hippuric or mercapturic acids [10]. The recently discovered, unconventional function of free CoA (CoA-SH) is protein CoAlation. This process is related to redox regulation and antioxidant defense [11]. Exemplary reactions that involve CoA-SH as a substrate and reactions in which CoA-SH is released as a product in human cells are presented in Table 1 and Table 2.

Table 1. Examples of reactions with the participation of CoA-SH as a substrate in human cells; based on Ridgway and Mcleod and the UniProt database [7][12].

Table 2. Examples of reactions involving CoA-SH as a product in human cells; based on Ridgway and Mcleod and the UniProt database [7][12].

The major pools of CoA-SH and its thioesters are found in mitochondria and the cytosol. Other organelles (peroxisome, nuclei, lysosomes, and endoplasmic reticulum) contain much less CoA-SH. In mitochondria, CoA-SH is used in: (a) fatty acids and ketone bodies oxidation (as a substrate for thiolases and carnitine palmitoyltransferase 2—CPT2); (b) tricarboxylic acid cycle (as a substrate for α-oxoglutarate dehydrogenase); and (c) oxidative decarboxylation of pyruvate and branched-chain α-keto acids [13]. In the cytosol, CoA-SH is mainly used in reactions catalyzed by ATP-citrate lyase (ACLY) and acyl-CoA synthetase (ACS) (Table 1).

The acyl groups formed during the metabolism of glucose, amino acids and fatty acids in human cells and those produced by gut microbiota are attached to CoA-SH to form its thioester derivatives, such as acetyl-CoA, succinyl-CoA, propionyl-CoA, isovaleryl-CoA, isobutyryl-CoA, α-methylbutyryl-CoA, and fatty acyl-CoA (commonly referred to as acyl-CoA), e.g., palmitoyl-, oleoyl-, and stearoyl-CoA (Figure 1A). 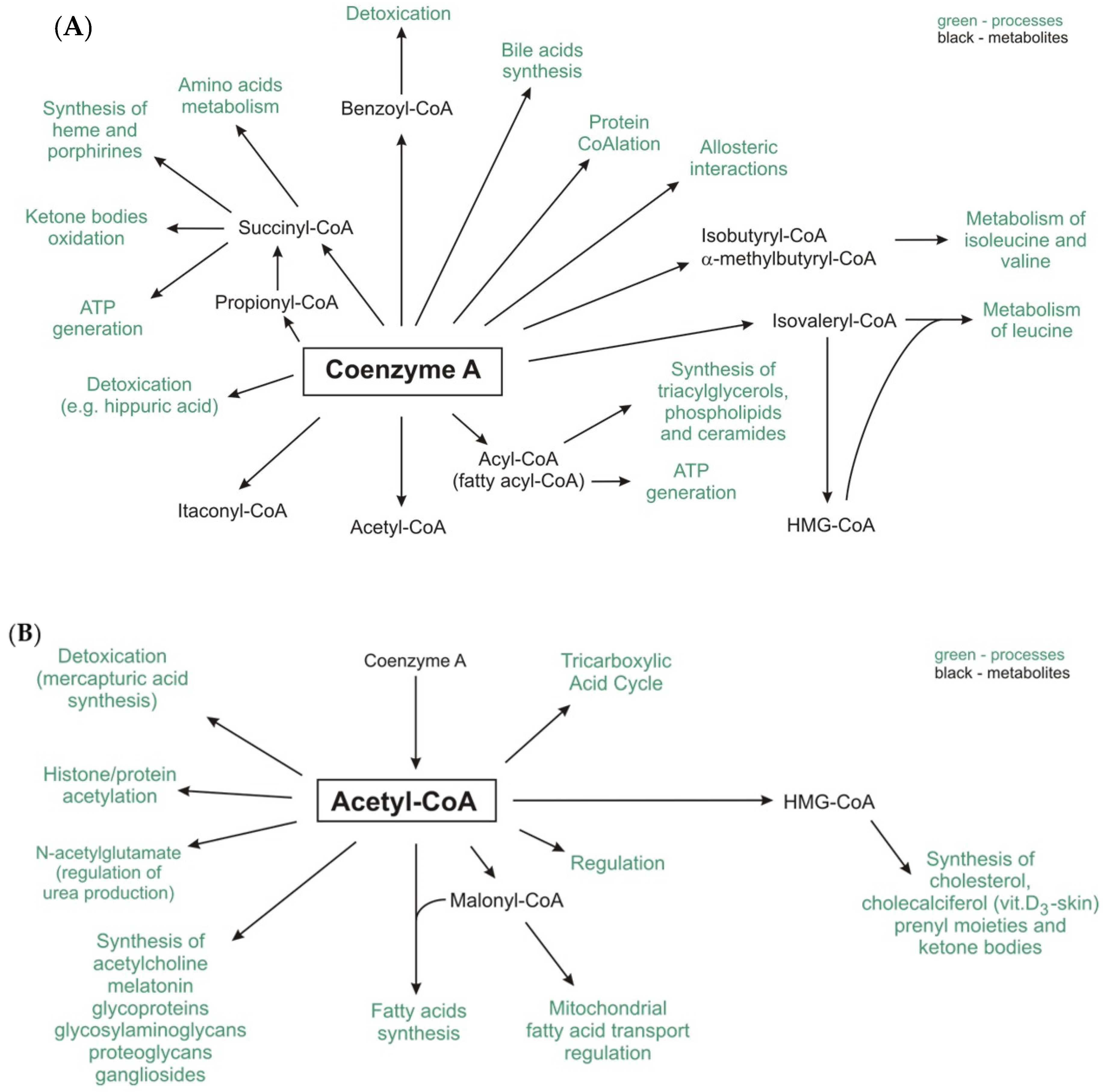 Figure 1. The role of CoA-SH (A) and acetyl-CoA (B) in human metabolism.

Among the abovementioned compounds, acetyl-CoA is the central and most important metabolite and forms an intersection between the anabolic and catabolic pathways [15]. Moreover, other important metabolites, such as malonyl-CoA (a substrate of lipogenesis and regulator of fatty acid oxidation) and 3-hydroxy-3-methylglutaryl-CoA (HMG-CoA) (a substrate for cholesterol and ketone bodies synthesis), are formed from acetyl-CoA (Figure 1B) [15][16].

The pool of CoA-SH in the cell is replenished by the enzymes that release it from thioester compounds, e.g., citrate synthase, acyl-coenzyme A: cholesterol acyltransferase (ACAT), many acyl- and acetyltransferases, acyl-CoA thioesterases, fatty acid synthase (FASN), fatty acid elongase (ELOVL), 3-hydroxy-3-methylglutaryl-CoA reductase (HMGR), and CPT1 (Table 2), [17][18][19][20][21]. Notably, changes in the CoA-SH/acetyl-CoA ratio affect not only the regulation of energy metabolism but also the regulation of other cellular processes, such as autophagy, mitosis, and cell death [20][22].

2. CoA and Its Precursor Pantethine as Circulating Lipid-Lowering Supplemental Agents

Since CoA-SH plays a key role in lipid metabolism, especially in fatty acid oxidation, scientists have hypothesized that CoA-SH or its precursor supplementation might reduce circulating lipid concentration. Indeed, it has been reported that the combination of CoA-SH (used at pharmacological doses) with a moderate dose of a statin was more effective in curing patients with mixed dyslipidemia than statin monotherapy [23]. Moreover, it has been shown that combined CoA-SH and statin therapy was more effective in improving triacylglycerol, total cholesterol, and non-HDL-cholesterol concentrations than statin alone in patients with metabolic syndrome and mixed hyperlipidemia [23].

Much more attention has been given to pantethine (a CoA-SH precursor) as a circulating lipid-lowering compound than to CoA-SH. Pantethine, a stable form of pantetheine (two molecules of pantetheine linked by a disulfide bridge) as a dietary supplement (used at a pharmacological dose of 600–1200 mg per day), lowers elevated levels of total cholesterol, LDL-cholesterol, triacylglycerol, and non-HDL-cholesterol concentrations [24][25][26]. The effect of orally administered pantethine also results in: (a) an increase in HDL cholesterol concentration; and (b) normalization of apolipoprotein B (apo B) and apolipoprotein A (apoA); however, the effect depends on the type of dyslipidemia [27][28][29].

The exact molecular mechanism of action of CoA-SH and pantethine on blood lipid concentration is unknown. Although pantethine is a precursor for vitamin B5 synthesis and intake of the pharmacological dose of pantethine results in higher circulating vitamin B5 concentration, the production of vitamin B5 is not the mechanism of action because intake of panthotenic acid does not have the same effect on serum lipid concentration [2]. Pantethine-induced inhibition of acetyl-CoA carboxylase by cysteamine, the product of pantethine and CoA degradation, and inhibition of HMG-CoA reductase and cholesterol synthesis in isolated hepatocytes by pantethine may explain, at least in part, the fact that pantethine (and possibly CoA-SH) administration in pharmacological doses is effective in reducing plasma triacylglycerol and cholesterol (total cholesterol, LDL-cholesterol, and non-HDL-cholesterol) concentrations [31][32][33].

Pantethine (specifically, the cysteamine formed from pantethine) inhibition of acetyl-CoA carboxylase decreases the level of malonyl-CoA, which is (a) a substrate for fatty acid synthesis; and (b) an allosteric inhibitor of CPT1, a key regulator of fatty acid oxidation. Consequently, this reduction of malonyl-CoA leads to (a) a decrease in fatty acid synthesis; and (b) an increase in fatty acid oxidation in mitochondria. In turn, plasma lipids are affected, especially by triacylglycerol-lowering effects.

However, another mechanism is not excluded. Considering that (a) gut microbiota (especially bacterial strains such Lactobacillus and Bifidobacterium) aid in decreasing lipids in hyperlipidemic patients; and (b) pantethine promotes the survival and growth of various beneficial gut bacteria; it has been suggested that microbiota can contribute (at least in part) to a possible mechanism of pantethine action on circulating lipids [26][32][33][34][35][36][37].

Pantethine supplementation also has some beneficial effects on parameters associated with platelet lipid composition and cell membrane fluidity. In diabetic patients, the lipid composition of platelets is significantly different than that of healthy subjects. Supplementation with pantethine normalizes platelet fatty acid composition to a control value, leading to a significant reduction in platelet hyperaggregation [38]. Moreover, pantethine inhibits lipid peroxidation of the LDL-cholesterol fraction and consequently reduces lipid deposition, intimal thickening, and fatty streak formation in the aorta and coronary artery [39]. The metabolic effects of pantethine are summarized in Figure 2.

Although several clinical trials have shown that CoA-SH and especially pantethine used at pharmacological doses reduce circulating lipid levels in patients with dyslipidemia associated with different pathologies, it seems that additional studies are necessary to determine whether CoA-SH or pantethine supplementation has a beneficial effect on cardiovascular risk markers independently of or in combination with a healthy diet. Moreover, further research is also needed to explain the exact molecular mechanism of CoA-SH and pantethine action on circulating lipid concentration. At present, it is safe to say that administration of CoA-SH is not entirely different from the administration of pantethine because in the end both compounds are converted to Pan and cysteamine.