The goal of surgery in trans-olecranon fracture dislocations is to restore the trochlear notch, whereas, in the case of a Monteggia fracture, emphasis is on the anatomical reduction to align the ulnar diaphyseal fracture [6]. For olecranon fractures, open reduction and internal fixation with plate or tension band wiring have been used; however, discussion of the prognosis is limited and insufficient. Given the relatively rare nature of this fracture, and findings that it is often misdiagnosed, few studies have been conducted. 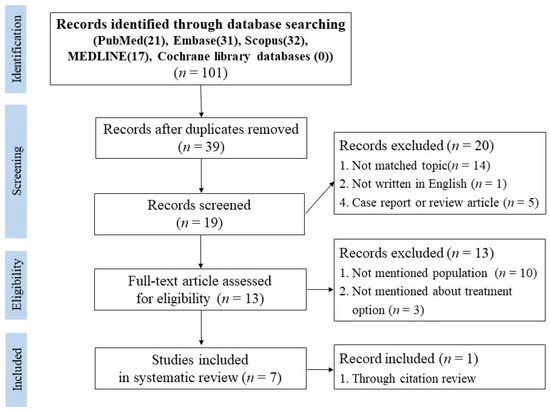 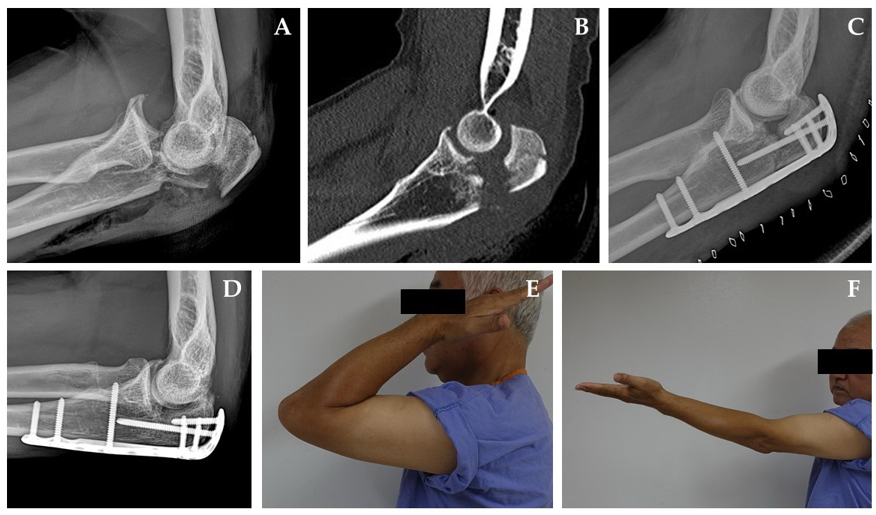 Figure 2. A sixty-year-old man sustained a trans-olecranon fracture-dislocation of the left elbow due to a two-meter fall. (A) The initial lateral radiograph revealed a complex fracture pattern of olecranon and the forearm was dislocated anteriorly. (B) There were impacted articular fragments at the center of olecranon fossa. (C) Lateral radiograph taken two days after the operation demonstrates restoration of the normal ulnotrochlear relationship with a minimal bone defect of the bare area of olecranon. (D) A lateral radiograph taken ten months after the operation shows the union of fracture sites without any arthritic change. (E,F) A good functional result was achieved.

The purpose of the current study was to present a systematic review for diagnosis, treatment, prognosis, and complications of trans-olecranon fracture dislocations. Results indicate that trans-olecranon fracture dislocations have a low frequency of instability and a good prognosis when the trochlear notch is properly restored by rigid plate fixation, contrary to the severity of elbow dislocation and peripheral fractures due to high energy trauma.

In the reviewed cases, the proportion of comminuted fractures was 81.8% (45/55) and the open fracture rate was 26.7% (28/105), supporting high energy trauma as a source of trans-olecranon fractures. Coronoid process fractures accounted for 53.3% (56/105), radial head fractures for 17.1% (18/105), and 6.7% (7/105) of fractures were both types. The reason the frequency of the coronoid process fracture is relatively high is thought to reflect the characteristics of fractures where disruption of the ulnohumeral joint and radiocapitellar dislocation both occur. The most frequently reported complications were arthrosis and heterotopic ossification, which likely reflect the characteristics of complex fracture dislocation. Conversely, the rate of limitation of motion was 1.9% (2/105), allowing for joint exercise soon after surgery.

In the current review, trans-olecranon fracture dislocations were often accompanied by coronoid process fractures and radial head fractures. For stable fixation of coronoid process fractures, Ring et al. suggested that interfragmentary screw fixation was necessary, while other papers did not provide further explanations of the treatment [2]. In the case of radial head fracture, excision was performed when the fragment was marginal, and radial head replacement was performed when comminution was severe [2][6][10].

In the study by Haller et al., four cases out of 35 cases of lateral ulnar collateral ligament (LUCL) injury were reported, all of which were accompanied by both coronoid process and radial head fracture. Considering that there was no LUCL injury in previous research, it is likely that there was only one case of both coronoid process and radial head fracture in other studies as well [5][10]. Öztürkmen et al. reported two cases of repair due to damage to the lateral collateral ligament, though the direction of fracture dislocation was not indicated, excluding the cases from analysis [13]. In two cases, ulnohumeral instability was reported, but this was due to failed anatomical reduction as both cases were treated conservatively using a long arm cast rather than surgical intervention [6].

Ring et al. recommended a limited contact-dynamic compression plate (LC-DCP) as the tubular plate is less rigid with a lower possibility of cyclic fatigue, suggesting that tension band wiring could be used in simple fractures [2]. However, Mortazavi et al. reported that tension band wiring is not recommended due to a lack of stability [5]. In the current review, revision surgery due to loosening or fixation failure was reported in six cases in open reduction and internal fixation with k-wire and in three cases using a 1/3 tubular plate [2][5][6][11][12]. The pre-contoured plate was used in 68 cases (68/77, 88.3%), making it the most frequently used, and revision surgery was not needed, suggesting that the pre-contoured 3.5 mm plate is the favored choice for treatment. In most cases of trans-olecranon fracture dislocations, the probability of elbow instability is very low and early active range of motion is required for a good postoperative prognosis [12]. Morrey et al. found that coronoid process fractures of more than 50% are the cause of traumatic arthrosis, though Ring et al. said that such cases do not always lead to poor results [2][14]. The prevalence of heterotopic ossification was 21.9% (23/105) overall in this systematic review but was reported as 42.9% (15/35) in a previous paper by Haller et al. Haller reported that the high prevalence is due to the lack of nonsteroidal anti-inflammatory medications and the absence of radiation prophylaxis to reduce the possibility of postoperative nonunion [10]. Haller et al. also reported that the incidence of post-traumatic osteoarthritis was statistically significant in cases with concomitant injury (radial head fracture, coronoid process fracture, capitellum fracture, and/or ligament injury) but not in olecranon fracture only [10]. Postoperative clinical scores included the Broberg/Morrey rating, which had a mean rating of excellent or good at 82.9%, while the mean ASES score was 88.7, and the mean DASH score was 11.75, indicating a good prognosis when the mechanism of fracture dislocations was high energy trauma. Postoperative mean elbow ROM obtained good results with rapid rehabilitation after the operation in most of the seven papers.

There are some limitations to this study that should be considered. First, most of the studies that extracted the data had a low level of evidence. Additionally, there are limitations due to the quality of exclusion criteria, reported preoperative factors, limited long-term follow-up, and a lack of randomization or blinding to avoid bias. In the current systematic review, there were no randomized clinical trials or case–control studies, and only case series or cohort studies were included. Therefore, integrated analysis was not possible, and strong conclusions could not be drawn. Though meta-analysis was attempted when collecting data on posterior olecranon fracture dislocations, it was not possible as cases of Monteggia type IIb fracture were included, resulting in a high possibility that bias may be accompanied in determining the range.