Silvicultural site preparation techniques are planned anthropogenic disturbances that are designed to aid in the regeneration and establishment of a new stand of trees.

The main goal of any silvicultural site preparation is to create a beneficial environment for tree regeneration and growth, which may include favorable germination spots for seeds[1], successful seedling survival and establishment[2][3], and a reduction in realized competition[4].

Prescribed burning can be used to prepare sites prior to planting in order to remove organic materials from the area[6][7]. However, prescribed burning requires planning during the harvesting, as it requires a continuous cover of slash to carry the fire, it is limited seasonally by weather and fuel conditions, and may intensify competition problems when undesired or invasive vegetation is adapted to fire or invades after fire[8][9]. In addition, the use of prescribed burning has declined in response to concerns regarding air quality[6]. Even though the use of prescribed burning has decreased in some areas, it is still used in boreal mixedwood ecosystems, especially in remote locations for the establishment of conifer plantations.

When employing the chemical site preparation method, which involves the use of systemic herbicides, the two main objectives are to control competing vegetation by reducing its abundance before planting or seeding and to control competing vegetation during the early stages of tree seedling establishment[10][11]. Where the objective of site preparation is not vegetation suppression alone, herbicides may be used in combination with MSP and burning methods[6][12][13][14]. A broad-spectrum herbicide is sometimes used in order to kill and dehydrate the vegetation prior to the use of broadcast burning, in a technique that is known as “brown and burn”. The selection of the chemical treatment involves determining which registered herbicide (e.g., those with glyphosate or 2, 4-D amine as active ingredients) would be the most effective on the identified target species[10]. The use of herbicides is greatly constrained by concerns regarding impacts on non-target organisms (especially non-target plants[15], aquatic animals, cyanobacteria[16], and human health[16]). Although sometimes applied in spot treatments for crop tree release, herbicide applications for site preparation are almost always applied in a uniform broadcast manner, usually by aircraft.

Mixing consists of incorporating the surface organic layer into the underlying mineral soil, which leaves the nutrients of the organic layers immediately available to germinants or planted seedlings. Mixing methods can be divided in three categories: coarse mixing, fine mixing, and spot mixing[1][17]. Coarse mixing is accomplished while using disc implements that heap clods of surface organic and mineral soil layers into a bed. This method provides slight control of competing vegetation, but it provides benefits where low soil temperatures and/or high soil water tables inhibit seedling growth[1]. Fine mixing is usually used on sites with high potential for competing vegetation, so a high-speed rotating implement is required to chop propagating plant parts small enough to control resprouting[1][18][17]. Spot mixing is usually recommended for sites where mixing is biologically suitable, but where stumps, slash, or other obstacles impede the use of strip mixing implements[17]. This method is also prescribed on sites where minimal soil disturbance is required[1][18].

The main purposes of mounding are to create elevated planting spots[2][17]. Spot mounding is an intermittent form of mounding, which removes vegetation and the surface organic layer and results in inverted or mixed soil on top of an organic surface or bare center. Mounds may be composed of mixed surface organic matter and mineral soil, or of mineral soil capping on top of a largely undisturbed organic layer. Deep planting is usually applied in order to protect roots from being exposed to weathering of the mound surface subsequent to planting[1][17].

Plowing consists of creating continuous elevated berms[1][2]. In some regions it is listed as continuous mounding because it creates elevated planting spots on ridges[2], while, in other regions, planting is done in the furrows. Ripper plows are modified standard ripper teeth, on the back of a tractor, and they are specifically designed for tilling wet ground when it is frozen[1]. The most common plow design is a double mouldboard, which attaches to the ripper shank of the tractor. The ripper teeth dig into the soil, while the plow attachment displaces soil on either side[1].

Scalping, which is also known as patch scarification, creates patches of mineral soil exposed in a systematic pattern by removing the surface organic layer to expose the underlying mineral soil. Planting spots are usually below the original ground level[2], but different planting spots may be chosen, depending on site conditions (e.g., moisture regime of the site[17]). On most sites, seedlings are recommended to be planted on the shoulder of exposed mineral soil, adjacent to the inverted humus[1]. Seedlings may be planted in the bottom of the scalp on dry sites. The depth of scarification has to be appropriate for the site. Scalping that is too shallow may not be sufficient for controlling vegetation if competing roots are not removed. If scalping is too deep, the planting spot may become waterlogged, especially on a wet site or during wet periods[1][17][18].

Inverting consists of turning the surface organic layer over; the inverted organic layer may be covered with mineral soil (mineral soil cap). Inverting is sometimes listed as one of the mounding techniques, although the planting spot normally is not significantly elevated[2][19]. On some sites, seedlings can have a problem with frost heaving following site preparation by inversion[17][20]. For instance, in Ontario, frost heaving in hand-simulated inverted humus mounds has been severe enough to cause concern regarding the suitability of such planting spots[17][20].

Silvicultural site preparation techniques can be classified according to whether they are implemented as spot treatments, strip treatments, or as broadcast treatments, which vary in the overall area affected. Techniques also vary in the degree to which they kill vegetation, displace biomass, bury it, or modify it in other ways. Figure 1 further arranges the above techniques according to typical ranges in the area affected, and the relative degree of biomass modification. 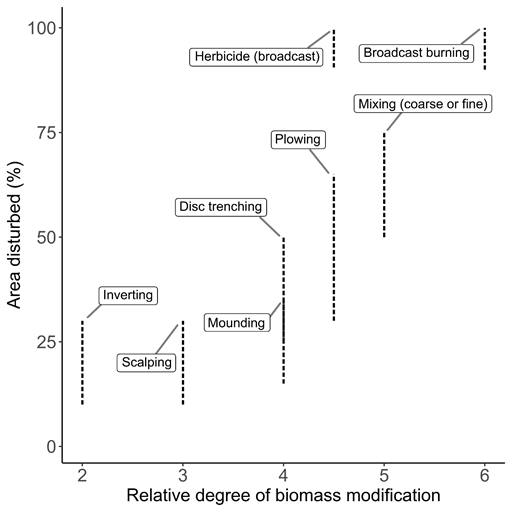 Figure 1. Arrangement of silvicultural site preparation techniques according to their typical ranges in the area affected, and the relative degree of biomass modification.