A closely related problem to The Clay Math Institute "Navier-Stokes, breakdown of smooth solutions here on an arbitrary cube subset of three dimensional space with periodic boundary conditions is examined. The incompressible Navier-Stokes Equations are presented in a new and conventionally different way here, by naturally reducing them to an operator form which is then further analyzed. It is shown that a reduction to a general 2D N-S system decoupled from a 1D non-linear partial differential equation is possible to obtain. This is executed using integration over n-dimensional compact intervals which allows decoupling. Here we extract the measure-zero points in the domain where singularities may occur and are left with a pde that exhibits finite time singularity. The operator form is considered in a physical geometric vorticity case, and a more general case. In the general case, the solution is revealed to have smooth solutions which exhibit finite-time blowup on a fine measure zero set and using the Gagliardo-Nirenberg inequalities it is shown that for any non zero measure set in the form of cube subset of 3D there is finite time blowup.

The question of whether the solutions to the 3-D- Incompressible N-S equations are globally regular or demonstrate finite time blowup has been a long going debate in mathematics and in general the scientific communities. The Millennium problem posed by the Clay Institute [1] is asking for a proof of one of the above conjectures. Seminal papers conducted by Jean Leray [2][3][4] proved that there exists a global (in time) weak solution and a local strong solution of the initial value problem when the domain is all of

, that is solutions up to some finite T* on an interval [0, T*]. While specific cases have approached answers in unique cases, the question of whether there is a unique solution for all instants of time, (ie. a global unique solution) is presently open. It has been shown that there exists a unique global solution for the 2D plane-parallel N-S equations [5][6]. While at first glance, the NSEs appear as a compact set of PDEs, the fascination with these Partial Differential Equations is only increased by the fact that the nonlinearity of the ensuing expanded equations, appear to be connected with notions of highly chaotic turbulence and vorticity [7][8][9][10]. Since the announcement of the Millennium Problem, several results have attempted to comment on the existence and uniqueness of the NSEs. One particularly recent result by Kyritsis noted that there existed indications towards establishing a regularity of solutions regarding the Euler Equations and NSEs more generally; this utilized the conservation of particles [11].In the present work, to the best of the authors’ knowledge, the procedure revealed here has not been previously observed in the literature on the question of Incompressible N-S 3-D existence of unique global solutions, except for compressible flows in [12][13][14]. First, a cube in

with boundary conditions that generate a vortex is considered , and an attempt has been made to naturally reduce the 3-D incompressible NSEs to a one component decoupled velocity field solution under scale invariant transformations, with a separate 2-component velocity field solution. For the variable z- component, in particular, a form of solution is extracted in the analysis presented using the divergence form of Green’s identity, Ostogradsky’s theorem. The decomposition method using Geometric Algebra is used in conjunction with a result that a bound for

implies bounds for all derivatives.[10]

where ρ is constant density, μ is dynamic viscosity ,

, are the body forces on the fluid. In some cases, it may be elected to reparametrize the components of the velocity vector, and pressure to

,coordinates xi and time t according to the following form utilizing the non-dimensional quantity d(assumed negative):

The continuity equation in Cartesian co-ordinates, is

Eq.(1), together with Eq.(3) and using the initial condition of

encompass the NSEs along with an incompressible initial condition. Ensuring periodic boundary 44 conditions specified in [1] defined on a cube domain Ω in

is referred to as the periodic BVP for the NSEs in

. See Fig. 1 below for geometry of flow problem. 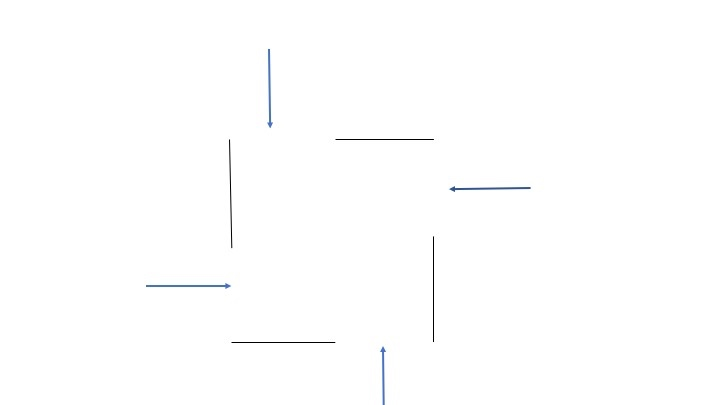 Figure 1. Vortex generation in a 2-D projection of cube.

respectively and adding modified equations within the set Eq.1 give the following equations, for the resulting composite vector

Multiplying Eq. 4 by δ3 and by

component of Eq.1 by δ3 and by

,(again using Eq.2), the addition of the resulting equations [12][13][14] recalling the product rule, produces a form as displayed below in Eq.5, where

. The nonlinear inertial term when added to

and adding to it

At this point the z component of the external force, Fz, is assumed to vanish, In this paper Eq.6 is solved, instead of Eq.5. For the ε–periodic solution, it is proposed that integration of divergence or curl of Eq.6 over an arbitrary small volume is equivalent to integration of divergence or curl of Eq.5 for the same volume. That is the extra term’s divergence or curl in Eq.6 when integrated is negligible on set of measure zero. A necessary condition that the form of Eq. 5, call it L1 = 0, is that both the divergence and curl of L1 be zero and upon integrating over a volume U, we introduce a function of t which we call Cs(t).The same is true for the non ε–periodic case where the justification of using Eq 6 instead of 5 will be based on the periodicity of the flow on an interval in

. It can be seen that for the general non zero measure set, upon separately taking the divergence and curl of Eq. 6 and integrating over the volume U and using first Ostogradsky’s theorem and the fact that the velocities are periodic on the interval in

, we have that the extra term

This contribution is also zero due to periodicity of velocities on interval.

The 3-D Incompressible Navier Stokes equations can be reduced to a simple form as,

is the nonlinear partial differential operator given by Eq.13, Q is the two dimensional Navier-Stokes operator acting on the vector

defined in the brackets of Eq.17 and

are defined after Eq.10 and are part of the proof of present Theorem 3.0.1.

Proof. Taking the geometric product with the inertial vector term in the previous equation Eq.6 given by

, it can be shown that in the context of Geometric Algebra [12][14], the following scalar and vector grade equations arise:

Taking the divergence of the vector equation Eq.8, recalling the product rule, and defining the new term

(After taking divergence multiply new equation by H), results in an expression which may be combined with the usage of the scalar equation Eq.7 to produce: 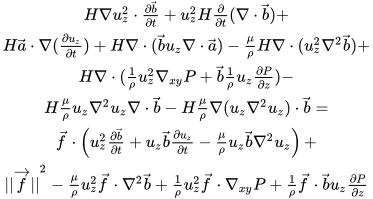 Continuing with the previous paragraph we use the common term

appearing in Eq.7,and in the new equation where we took divergence of Eq.8 and multiplied by H. This term in Eq.8 is

. Upon a division of the preceding equation 9 by

, it can be seen to result in the general form:

where for brevity, the following symbols have been defined:

It can be seen that the expression beginning with parentheses may be abbreviated into a nonlinear
vector operator Q and so Eq.10 can be written compactly as:

is the non-linear operator associated with remaining part of Eq.10. Utilizing the continuity
Eq.3, it can be seen that the operator

is given by the following expression:

The nonlinear operator form of the NSEs presented is:

This completes the proof.

An important observation is that in Eq.12,

Equation 13 displays a general form which may be expanded and analyzed by allowing a geometric assumption to be undergone, or the general case may also be considered.

As a special case, one may consider the case where:

This condition means that the Lie Product of the velocity inertia is entirely perpendicular to the Force terms, and thus refers to a vortex fluid scenario. This condition automatically implies

For Q, the expressions with

(that is Eq.4), remains which is identically zero, This means that

may be assumed to be:

The expression in brackets in Eq.17, for

, is the 2-D "plane-parallel" Navier-Stokes Equations and it is well known that if all data of problem are independent of one of x, y, z, then the BVP in Eqs.1, Eqs.3, has a unique solution for all instants of time with no restrictions on smallness of

Using Green’s identity, for divergence (see Appendix B), also known as Ostogradsky’s Theorem, it is known that for an arbitrary vector field

Eq.16 can be expressed due to integration on a general rectangular volume U as:

Note that the surface integral in Eq.18 is zero since it is taken over six faces of a general rectangular volume, and

is a periodic vector field with normals pointing in opposite directions on opposite sides. Here

which is assumed to be equal on the four vertical faces of cube and not equal between the top and bottom face. Also Ω1 is zero using Eq.18 and continuity Eq.3, Ω3 vanishes using Eq.18 as well due to periodic boundary conditions on the cube’s surface. The pressure is expressed using the divergence theorem as a surface integral over the surface. In addition Ω4 and Ω7 vanish using the divergence theorem and the fact that

is periodic on the surface of U.

Lemma 1 (Maximum Principle For Eq.19). In this lemma we prove a maximum principle for Eq.19 in the general case where there are no restrictions on Φ and the most general Gagliardo [15]-Nirenberg [16] inequality (see also [17]) is used in this lemma and can be stated as follows, Let

then there exists a constant C independent of u such that ,

Proof. Using the z momentum equation again and multiplying by

using the negative term δ, and for

. We abbreviate to the following expression involving the pressure and velocity terms,

(Note: General case of constant in space but not in time velocity at centre of cube is considered; Also the Poincare inequality has been used. We have used a result which states if the infinity norm is bounded then all the derivatives are bounded.)

The gradient of pressure is negative inorder to drive the flow, so that -

. The determining factor is the integration function in t term

, which is positive and leads to a blowup. To show this the remaining steps are to use the condition,

where B1 is the infimum of F(x, y, z) in the cube which is non-zero since there is a maximum negative flow in the z direction at the centre ( There exists a negative pressure gradient in z driving the flow downwards in cube with vortex in x, y directions ) and

in previous equation and differentiating with respect to z the form of the equation results in the following two ordinary differential equations,

where λ is a separation constant.