Ginseng is one of the most widely consumed herbs in the world and plays an important role in counteracting fatigue and alleviating stress. The main active substances of ginseng are its ginsenosides. Ocotillol-type triterpenoid is a remarkably effective ginsenoside from Vietnamese ginseng that has received attention because of its potential antibacterial, anticancer and anti-inflammatory properties, among others. The semisynthesis, modification and biological activities of ocotillol-type compounds have been extensively studied in recent years.

From the 1940s to the middle of 2019, approximately 33.5% of approved drugs were either natural products or directly derived from them [1]. The development of new drug entities based on natural products as sources of novel structures is still an area of active research. Ginseng, including Asian ginseng (Panax vietnamensis HA et GRUSHV.) and American ginseng (Panax quinquefolium L.), is one of the most widely consumed herbs in the world and plays an important role in counteracting fatigue and alleviating stress [2][3]. Ginseng contains a variety of active ingredients, but its main active substances are attributed to its ginsenosides. The ginsenosides with the highest content in Vietnamese ginseng are protopanaxadiol, protopanaxatriol, oleanolic acid and 20,24-epoxydammarane (ocotillol) (Figure 1) [4][5].

Among the active components of ginseng, ocotillol-type compounds have received increasing attention because of their antibacterial, anticancer and anti-inflammatory properties [6][7]. Their different pharmacologic effects and potential molecular mechanisms have been gradually elucidated. Compared with the structure of dammarane ginsenosides (including the protopanaxadiol and protopanaxatriol types), ocotillol-type saponins are tetracyclic triterpenoid saponins containing a furan ring linked with aglycones.

Figure 1. Ginsenosides are found in the highest abundance in Vietnamese ginseng.

Ocotillol-type sapogenins have been made using similar synthetic methods. 20(S)-PPD was used as the raw starting material and reacted with acetic anhydride, and then acetylated 20(S)-PPD was oxidized by m-CPBA. The molar ratio of the acetylated 20(S)-PPD to m-CPBA at −3 ℃ is approximately 1:4, 3 h. The ocotillol-type epimers (4, 5) were obtained by the hydrolysis of the oxidation products. The synthetic route is shown in Figure 2A [23].

After further research by Meng et al., the synthesis mechanism of ocotillol-type epimers was proposed as follows (Figure 2B). 20(S)-PPD or 20(R)-PPD is oxidized by m-CPBA to generate the 24,25-epoxy intermediates, and then an intramolecular ring-opening loop reaction is carried out according to Baldwin’s rule, and finally cyclization by a 5-exo-tet method forms a tetrahydrofuran ring [24][25][26]. 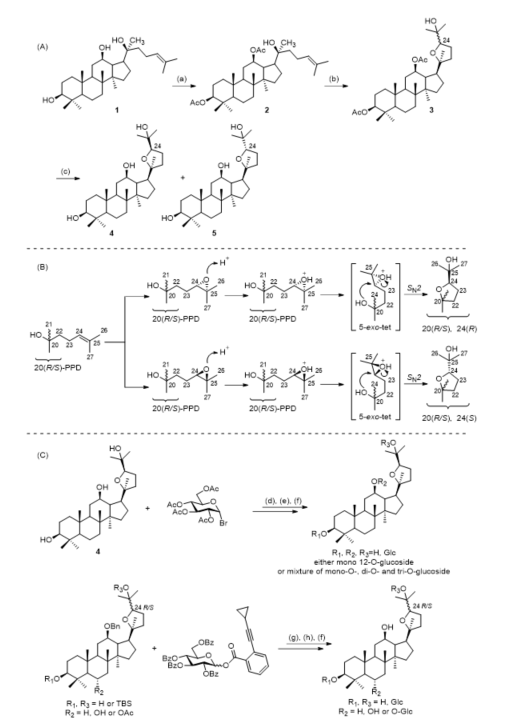 Evidence has shown that ginseng has antibacterial properties, and its extract may be effective for treating bacterial infections in the future [33]. Compound 5 had strong antibacterial activities against Staphylococcus aureus (S. aureus) and Bacillus subtilis (B. subtilis) with minimum inhibitory concentration (MIC) values of 8 μg/mL [34]. Further research showed that 5 also had strong synergistic inhibition against community-associated methicillin-resistant S. aureus (MRSA; strain USA300), as 5 reduced the MIC of kanamycin (KAN) against MRSA USA300 from 1 μg/mL to 0.125 μg/mL giving a fractional inhibitory concentration index (FICI) of 0.14.

The furan ring, C-3 and C-12 are possible to explore in terms of chemical diversity as a modification of the furan ring, C-3, and C-12 significantly changed the antibacterial activity of ocotillol-type derivatives. Aromatic-substituted ocotillol-type derivatives 6–17 were synthesized by an esterification reaction, and their in vitro activity against Escherichia coli (E. coli), B. subtilis, S. aureus, Pseudomonas aeruginosa (P. aeruginosa) and Acinetobacter baumannii (A. baumannii) was determined (Figure 4) [35]. Compounds 6 and 7 exhibited excellent antibacterial activities with MIC values of 1 μg/mL against S. aureus and B. subtilis, while compounds 9, 10, 12 and 16 exhibited moderate antibacterial activities against S. aureus. Further research showed that 6 and 7 displayed good antibacterial activities against MRSA USA300 with MIC values of 4 μg/mL. Additionally, 6 and 7 combined with KAN and chloramphenicol had strong synergistic inhibition against MRSA USA300 and reduced the MICs of KAN against MRSA USA300 from 1 μg/mL to 0.0156 and 0.0625 μg/mL (FICI = 0.078 and 0.020, respectively).

Bi et al. synthesized aliphatic ocotillol-type derivatives 18–33 (Figure 4) [36][37][38]. Compounds 18, 20–23, 25 and 30 showed good antibacterial activities against S. aureus and B. subtilis. Further screening results showed that 5, 18 and 19 had similar antibacterial activities against MRSA USA300 with MIC values of 8 μg/mL. Most ocotillol-type derivatives with an amino group at C-3 displayed excellent antibacterial activities, while those with a carboxylic group at C-3 showed moderate activities. A synergistic effect was observed for compound 19 as it reduced the MIC of KAN against MRSA USA300 from 1 µg/mL to 0.25 µg/mL with a FICI of 0.28.

A series of ocotillol-type derivatives 34–55 with an amino group was also synthesized (Figure 4) [39][40]. The antibacterial activity results showed that most of the ocotillol-type derivatives with an amino group had moderate to good inhibitory activities against Gram-positive bacteria but had no effect on Gram-negative bacteria. Compounds 38, 40 and 51 had good inhibitory activities against MRSA USA 300 with MICs ≤ 4 µg/mL, while 51 had the same antibacterial activity as KAN. A synergistic effect was observed for 39 when it was combined with KAN as shown by the significant enhancement of the MIC from 4 µg/mL to 0.25 µg/mL (FICI < 0.0088) against MRSA USA300.

A series of derivatives 57–61 were synthesized and screened. Among them, compound 58 had the best antibacterial activity against MRSA USA300 with a MIC of 8 μg/mL, and 60 had a moderate inhibitory effect against both Gram-positive and Gram-negative bacteria (Figure 4). Additionally, 58 combined with KAN had strong synergistic inhibition against MRSA USA300 with a FICI of 0.008.

Ocotillol ketone derivatives 62–69 were synthesized by Zhou et al. (Figure 5). Compound 4 (0.21 mmol) in dry dichloromethane (8 mL) was added to pyridinium chlorochromate (0.40 mmol), and the mixture was stirred at room temperature for 3 h to obtain compound 62 with 66% yield. While compound 64 was synthesized by combining 4 (0.33 mmol) and pyridinium chlorochromate (1.00 mmol) in dry dichloromethane (8 mL), the reaction takes about 8 h to obtain intermediate with 76% yield at room temperature. Compound 65 had excellent antibacterial activities against S. aureus with a MIC of 16 μg/mL, while compounds 67 and 69 had moderate inhibitory effects against S. aureus.

Ocotillol-type derivatives with a nitric oxide (NO) donor 70–91 were synthesized, their NO release ability and the antibacterial abilities of some derivatives were studied (Figure 6) [41]. Compounds 70–91 showed similar NO-releasing capability at 100 µM. Compounds 71, 75, 77, 83, 84, 86, and 91 showed better NO-releasing capability at 500 µM as after 30 min of reaction, they all released more than 0.2 M NO. Compounds 83 and 86 demonstrated good activities against Gram-positive bacteria (MIC = 16 μg/mL against B. subtilis 168 and S. aureus). Compound 86 displayed broad-spectrum activity against Gram-positive and Gram-negative bacteria. Compound 86 used with chloramphenicol also showed good synergistic effects with a FICI = 0.03 against MRSA USA300.

A series of ocotillol-type lactone derivatives 92–108 was designed by Zhang et al. (Figure 7) [42]. Compounds 96–98, 100 and 102 demonstrated good activities against S. aureus and B. subtilis with MIC values of 1 to 8 μg/mL. Compounds 96, 100, 101, 102, 105 and 107 showed good activities against MRSA USA 300. Compounds 96 and 102 also exhibited bactericidal activities with minimum bactericidal concentration (MBC) values of 4 and 8 μg/mL. Additionally, 102 reduced the MICs of KAN and chloramphenicol against MRSA USA300 from 1 and 4 μg/mL to 0.125 and 1 μg/mL (FICI = 0.141 and 0.375), respectively. Zhang et al. also analyzed the antibacterial effect of the ocotillol-type lactone derivative 102 by scanning electron microscopy, a cytoplasmic β-galactosidase leakage assay and UV-visible analysis [42]. The results showed that 102 might exert its antibacterial effect by damaging bacterial cell membranes and disrupting the function of DNA. The precise mechanism of its DNA antibacterial action is currently under investigation. 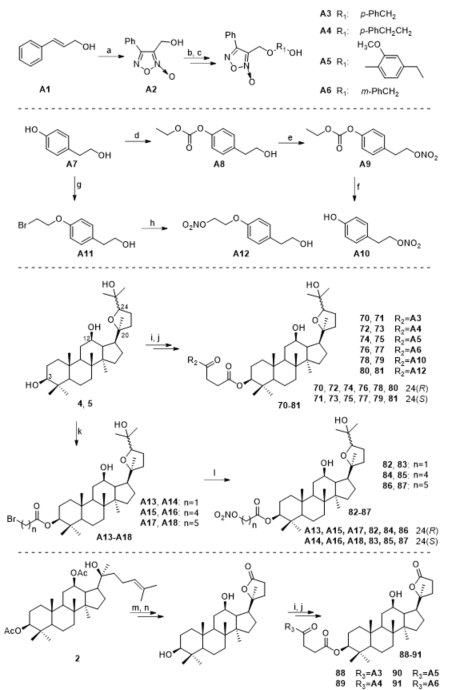 Based on the present research of the ocotillol-type derivatives, a preliminary SAR of their antibacterial activities is summarized in Figure 9. The 24(S)-configuration is preferred, while substitution at the 3-OH changes the conformation to render the 24(R)-compound bioactive. A hydrogen donor at C-3 and C-12 are preferred to maintain the activity against Gram-positive bacteria. Decreased activity was observed when the functional groups at C-3 and C-12 were a ketone. When R2 is an ester, mild activity against Gram-negative bacteria was observed. 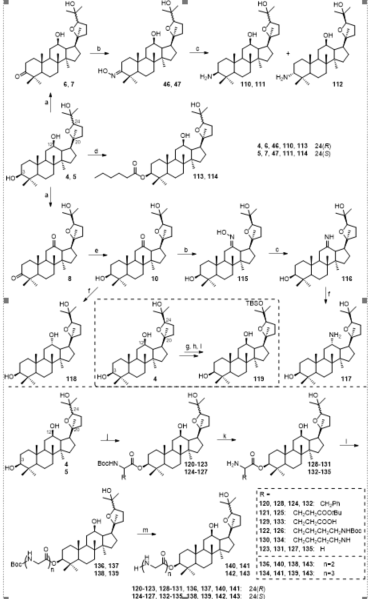 Wang et al. synthesized a series of ocotillol-type derivatives (Figure 11) [55][56][57]. Compound 144 had a protective effect on the lung function of experimental model mice with hormone-resistant asthma caused by non-typeable Hemophilus influenzae and improved their hormone resistance. Compounds 58 and 145–149 had inhibitory effects on the IL-6 expression and promoting effects on the IL-10 expression in the serum of rats induced by chronic obstructive pulmonary disease (COPD) caused by cigarette smoking.