Fungal metabolism is an excellent source of compounds related to the improvement of human health, and a discussion on this application is presented below.

The metabolism of filamentous fungi is capable of producing inumerous secondary metabolites that can used for the development of functional foods, nutraceuticals, and bioactive substances that can be used as medicines. Fungal metabolism is usually fast and the scale up is usually easier than in some other processes.

Health concerns have always existed among humans. Although some conditions and diseases cannot be avoided yet, the manifestation of several non-transmissible chronic diseases (NTCD) with high prevalence in patients over 60 years of age such as diabetes, cardiovascular, and neurodegenerative diseases can be delayed by adhering to a healthy lifestyle, which among other factors, is directly correlated to eating habits. The physiological effects associated with the consumption of certain foods are thus becoming very popular. Several types of diets and foods such as the fat-free diet, low-carb diet [1], Mediterranean diet [2], and soy-based diet [3] have been adopted in the quest for healthy aging. Several effects of NTCD have also been postponed through calorie restriction diets in animal models [4]. However, prolonged caloric restriction in humans generates undesirable effects; thus, alternative ways of preventing NTCD have been sought through the development of drugs, foods, and/or nutraceuticals that have both health-promoting and anti-aging effects, without causing adverse effects [5]. There is an increasing trend to combine the use of nutraceuticals with pharmacotherapy, even among individuals with non-aging-related diseases.

As oxidative stress is among the metabolic factors and pathways most related to cell aging, the consumption of nutraceuticals and functional foods with antioxidant activity has increased. Antioxidants can benefit the human body by directly or indirectly neutralizing reactive oxygen species (ROS), modulating metabolic pathways and gene expression, and activating mechanisms of cellular stress and autophagy that delay aging through pathways unrelated to ROS [5]. The nutraceutical market has already reached market values up to USD 117 billion [6]. Nutraceuticals can be classified into several categories based on the level of innovation and area of application (Table 1) [7][8]. Another trend associated with health improvement and NTCD prevention is that of consuming natural foods or foods containing natural, rather than synthetic, additives such as natural flavoring agents, acidulants, and colorants. Several people also prefer vegetarian and vegan diets, which involve restrictions in food and additives of animal origin to different extents; such diets are mainly motivated by the environmental impacts of livestock farming and animal welfare and have prompted studies on the possible effects of these diets on health [9] and increased the market demand for new vegetarian and vegan food products. A comprehensive review of the various aspects of fungal biotechnology and industrial applications was recently published by Meyer et al.[10].

Table 1. Examples of food additives and nutraceuticals from fungi.

The consumption of fungi as food mainly involves the consumption of mushrooms (Ascomycota and Basidiomycota phyla), which are enjoyed worldwide, sometimes as delicatessen or gourmet products. However, the role of fungi in human and animal health extends much further than the recognized health benefits of mushrooms [21]. Many fungal species are commercially available as supplements or nutraceuticals, and the fungal metabolites produced by these organisms including many non-Basidiomycota species as functional foods have multiple pharmacological activities. Examples of fungal species used as functional foods include many species of microscopic filamentous fungi that are easily cultivated under ex situ scalable conditions such as some well-known Penicillium, Aspergillus, and Fusarium species. However, lesser known species such as Ashbya gossypii also play an important role in the production of food additives such as riboflavin (vitamin B2) (1) (Figure 1) [22]. Other important fungal products associated with health improvement are enzymes such as β-galactosidase, which hydrolyzes lactose from dairy foods, is produced by filamentous fungi such as Trichoderma sp., and is helpful for lactose-intolerant individuals [23]. 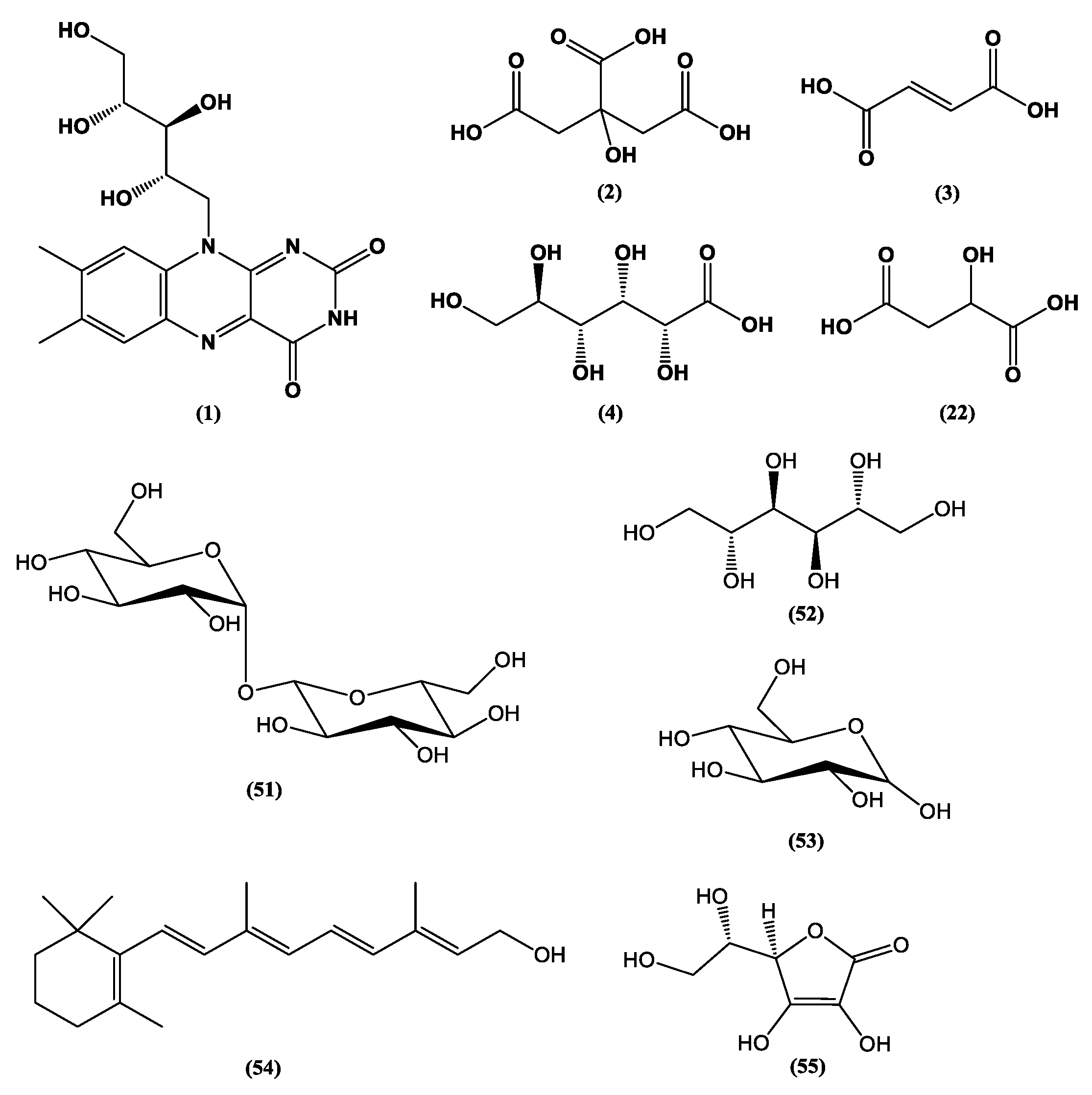 Prompted by the growing evidence for the association between natural compound intake and health, there is a demand for the replacement of synthetic food additives with natural products. Fungal metabolites feature many properties that have been explored for such replacement.

Fungi provide several food additives and technology adjuvants such as organic acids, colorants, and fatty acids including some ω-3 and ω-6 class fatty acids, which are essential for human metabolism. Citric acid (2) and fumaric acid (3) (Figure 1), metabolites of Aspergillus niger and Rhizopus oryzae, respectively, are outstanding food additives that are industrially produced. Citric acid (2) and gluconic acid (4) (Figure 1) are fungal products with the highest commercial-scale production [24]. Citric acid (2) has a number of applications as an antioxidant, preservative, acidulant, pH control agent, and flavor regulation agent, with market numbers predicted to reach USD 3.6 billion in 2020 [24].

The harmful effects of synthetic food colorants on human health such as attention-deficit/hyperactivity disorder, asthma and allergies, cancer, and neurological disorders have accelerated the search for natural substitutes. The use of the yellow coloring compounds tartrazine, quinoline, and sunset as well as the red coloring compound amaranth [25] has been regulated and supervised by the World Health Organization. In addition, sustainability issues have contributed to the decreased acceptability of non-biodegradable synthetic colorants that are difficult to remove from effluents, causing toxic effects on plants, bacteria, algae, fishes, and crustaceans [26]. Fungal pigments and dyes have emerged as alternatives to these synthetic food additives [27].

Food dyes are coloring materials soluble in food substrates, while food pigments are insoluble in food and need to be carried by vehicles that bind to the food instead [28]. Food colorants are pigments or dyes approved for use as food additives [29] (FDA, 2017). A wide spectrum of natural colors can be obtained from metabolites of fungi of different genera such as Eurotium, Fusarium, Monascus, and Penicillium, isolated from marine and terrestrial environments and extracted by techniques considered environmentally friendly including those employing ultrasound, pressurized liquid, microwaves, and pulsed electric field [30]. The fungal metabolites have a wide color range, which can be represented by carotenoids such as lycopene (red) (5), β-carotene (yellow-orange) (6), and astaxanthin (pink-red) (7); azafilones such as monascorubrin (orange) (8) and ankaflavin (yellow) (9); and the quinine derivatives alizarin (purple-red) (10) and bikaverin (red) (11) (Figure 2). Arpink Red (12) (Figure 2), an anthraquinone produced by Penicillium oxalicum, has been approved by the Codex Alimentarius for use as a food colorant in meat products, dairy, confectionery, ice cream, and alcoholic and non-alcoholic beverages [31][32]. Naftoquinone hydrosoluble metabolites (purple color) were produced by a soil-originated strain of Fusarium oxysporum using a simple culture medium containing glucose, ammonium sulfate, and salts [33]. Crystalline neoechinulin A (13) (ivory color), neoechinulin B (14), and cladosporin (15) (all having a yellow color) (Figure 2) are described as metabolites of Eurotium amstelodami, Eurotium herbariorum, and Eurotium rubrum isolated from outdoor and indoor samples in Canada and grown in medium containing sucrose, yeast extract, and salts [34].

Fungi and their metabolites have important industrial applications in high-value-added products and have potential for the development of nutraceuticals that can contribute to the prevention of NTCD and improve health, especially in terms of human aging. In addition, fungi are suitable in the production of natural food additives such as colorants and stabilizers that have lower health risks than synthetic food additives, and bioactive metabolites for pharmacological use such as enzymes, statins, and antitumor agents. Fungal antioxidants have applications in both food preservation and the combat of oxidative stress in the human body, with positive outcomes for several diseases such as cancer. The use of metabolic engineering techniques has facilitated the overcoming of some obstacles to explore the pharmacological potential of fungi, even those producing toxic substances such as some species of the genera Monascus, Aspergillus, and Fusarium. Modern approaches have been successfully utilized to evaluate the interference of additives derived from fungi with the organoleptic properties and quality of food. Strategies currently available for scaling up metabolite production include direct genetic alteration with tools such as CRISPR-Cas9 and gene recombination. Research on the use of agro-industrial byproducts for sustainable fungal fermentation has shed light on its remarkable economic importance to the production of natural additives, food, drugs, and nutraceuticals. Further in vivo antioxidant activity studies of fungal metabolites are still scarce; however, new insights are required to expand the use of metabolites from filamentous fungi to improve human health in the 21st century.