The expression of SOX proteins has been demonstrated in many tissues at various stages of embryogenesis, where they play the role of transcription factors. The SOX18 protein (along with SOX7 and SOX17) belongs to the SOXF group and is mainly involved in the development of the cardiovascular system, where its expression was found in the endothelium. SOX18 expression was also demonstrated in neoplastic lines of gastric, pancreatic and colon adenocarcinomas. The prognostic role of SOX30 expression has only been studied in lung adenocarcinomas, where a low expression of this factor in the stromal tumor was associated with a worse prognosis for patients. Because of the complexity of non-small-cell lung cancer (NSCLC) development, the role of the SOX proteins in this malignancy is still not fully understood. Many recently published papers show that SOX family protein members play a crucial role in the progression of NSCLC.

It has been proved that the SOX family proteins (SRY-related High Mobility Group (HMG)-box) play a crucial role in the development of the lymphatic ducts and the cardiovascular system. Additionally, it has been recently studied that the SOX18 protein can be involved in wound healing processes and arteriosclerosis disease progression. Moreover, an increased expression level of the SOX18 protein has been found in several malignances, including melanoma, stomach, pancreatic, breast and lung cancers. In breast cancer, SOX18 correlates with the degree of malignancy and the proliferation status.

The role of the SOX18 and SOX30 expression in non-small-cell lung cancers (NSCLCs), especially in lung adenocarcinoma (AC) and lung squamous-cell carcinoma (LSCC), is not yet fully understood. However, if we take into account previous reports, these proteins may be important factors in the development and progression of NSCLCs.

Our preliminary studies showed a disparity in the amount of mRNA of the SOX18 gene relative to the amount of protein. This is why our attention has been focused on microRNA (miRNA) molecules, which could regulate the SOX18 gene transcript level. So far, we have been able to identify two miRNA molecules that may be involved in this process: miR-7a and miR-24-3p. The fact that their expression level in malignant tumors is altered may be used both in the diagnosis and the treatment of non-small-cell lung carcinomas.

Recent data point to the fact that in practically all types of cancer hundreds of genes exhibit an abnormal methylation, covering around 5–10% of the thousands of CpG islands present in the promoter sequences, which in normal cells should not be methylated from the moment the embryo finishes its development. It has been demonstrated that in NSCLC cases there is a large heterogeneity of the methylation process. Healthy lung cells show a strong hypermethylation of the SOX18 gene promoter.

Because of the complexity of NSCLC development, the role of the SOX proteins in this malignancy is still not fully understood. Numerous papers published recently show that the SOX family members play a crucial role in the progression of NSCLC.

Understanding the molecular mechanism of NSCLCs’ initiation, promotion and progression processes are the main focus of many researchers worldwide. Out of the many cancers identified, lung cancer is the most common in the world (11.6% of all cases) [1]. It mainly occurs in the older population. Lung cancer is by far more common among men (22% of all cancers) than in women (9.5%). Each year, more people suffer and die from NSCLC than from breast, colon and prostate cancers together [1][2][3][4]. This raising trend of NSCLC morbidity has been observed in developing countries [2][3], mainly due to factors such as an aging population, a decrease in physical activity and smoking [1][3].

The main cause of lung cancer is the exposure of the body to harmful, carcinogenic chemical substances [5][6][7]. It is believed that the most common and important risk factor for all histological types of lung cancer, responsible for the development of about 85% of all cases, is smoking [8][9][10][11][12]. The possibility of cancer appearance in smokers increases 20-fold in comparison with non-smokers [9][13]. Furthermore, it was found that both the duration of the smoking habit and the number of daily cigarettes have a directly proportional effect on the appearance of lung cancer [1][4][13][14][15][16][17].

Recently documented studies have led to distinguishing a new type of lung cancer: lung cancer in never-smokers (LCINS) [18]. LCINS is being proved to be caused mostly by exposure to harmful substances, passive smoking and unhealthy eating habits [1][4][10][15][18]. Moreover, LCINS is associated with a range of characteristic mutations different from those present in smokers [19]. In the histological classification, two main groups of lung cancer can be found: small cell lung cancer (SCLC) and non-small-cell lung cancer (NSCLC) [20][21][22]. This distribution has an important clinical significance since these tumors are not only different in terms of their histogeneses, histological structures and disease courses, but also with regard to their methods of treatment and response to the therapies applied [21][22]. NSCLCs are much more common than SCLCs and represent approximately 85% of all lung cancers. Over half of these cancers are detected at an advanced clinical stage—i.e., III or IV [20][21][22][23][24][25][26][27]. NSCLCs are more diverse than SCLCs and are less responsive to common chemotherapy [28]. There are three main histological subtypes of non-small-cell lung cancer: adenocarcinoma (AC), lung squamous-cell carcinoma (LSCC) and large-cell carcinoma (LCC) [21][28].

Adenocarcinoma cases have been reported to be approximately 50% of all NSCLC cases. It differentiates from the alveolar epithelium in the smaller bronchi and the bronchioles [29][30]. Since it is equally common among smokers and non-smokers, it has been postulated that the molecular mechanism of adenocarcinoma progression could be associated with factors other than tobacco smoke.

The least frequently occurring type of NSCLC is the LCC (10–15% of all cases) [21][23][28]. This tumor is most often localized in the peripheral segments of the lungs. Histologically, LCC is formed from clusters of large, multilateral cells with a vesicular nucleus and a strongly marked nucleolus [28]. The large-cell cancer group includes tumors poorly differentiated, with a poor prognosis in which the characteristics of LSCCs and ACs have not been identified [33].

Since adenocarcinoma and squamous-cell lung carcinoma are the two most common types of NSCLC, we have focused our attention on these types of tumors. Morbidity is the highest among non-smoking people, women and young people up to 45 years of age. In comparison to other types of NSCLC, AC and LSCC are usually located in a focuse, which enables more efficient and more effective anticancer therapies [2][5][8][34].

As many other malignances, lung cancer develops because of an accumulation of genetic mutations and genomic material damage, which lead to tumor transformation [35]. It has been very well documented that in the case of NSCLC progression, most mutations are associated with pathways related to the activation of the epidermal growth factor receptor protein (EGFR)—i.e., RAS/RAF/MEK/ERK and PI3K, as well as AKT/mTOR. Changes in the EGFR pathways lead to an increase in cancer cell proliferation and their ability to metastasize and initiate the angiogenesis process [20][22][26][36]. If one compares normal lung tissue and small-lung cell lung cancer, the EGFR membrane expression is more frequent in NSCLC cases—it has been observed in 40–80% cases of NSCLC, including 24–89% of LSCCs and 23–46% of ACs [37][38][39][40].

A better understanding of the molecular mechanisms of NSCLC progression lays in the basis of a new and successful targeted therapy. Therefore, it is important to search for new and more specific therapeutic targets. Bearing this in mind, the SOX protein family members could be a successful anticancer therapy, as well as a new prognostic and progression marker.

Out of all lung cancer types, AC and LSCC are the two most common types. It is believed that the most common and important risk factor for all histological types of lung cancer, responsible for the development of about 85% of all cases, is smoking. The main disadvantage of using standard chemotherapy is the low selectivity in relation to cancer cells, because the substances used in the treatment of lung cancer are also harmful for healthy, unchanged body cells. The data presented in this manuscript show that SOX7, SOX17, SOX18 and SOX30 are proteins involved in the progression of NSCLC. Divergent mRNA and SOX protein levels in NSCLC and normal lung tissue have drawn the attention of scientists to the potential role of miRNA molecules interacting with the transcript of the SOX18 gene, and on the possibility of SOX18 and SOX30 as methylation promoters. This may be crucial in the development of effective anticancer-targeted therapy. These epigenetic modulations show how complex and complicated the molecular pathogenesis of the development of AC and LSCC is. Figure 1 presents SOX18 and SOX30 immunochemical reactions and shows their expression pattern in NSCLC cases. 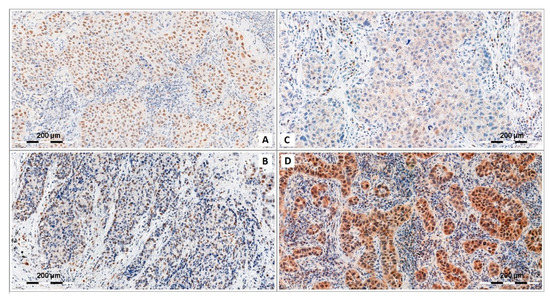 A better comprehension of the molecular mechanisms of the progression of malignant tumors may lead to the discovery of modern and highly specific antitumor therapies. Therefore, more effort has to be made in trying to discover new and more effective therapy schemes based on markers that could be potential targets.

The prospect of the application of miRNA which interacts with the SOX genes’ transcripts in the treatment of NSCLC seems to be promising, for there are already many other similar miRNA molecules with proven anticancer functions. The variable levels of the miRNA molecules as well as the DNA methylation profile of the SOX18 and SOX30 promoters can be detected in the patient’s blood, which additionally increases the availability and universality of their use in the diagnosis of lung cancer, as they provide information not only on the type of tumor, but also on the development stage. In this sense, the SOX protein family appears to be an auspicious element in anticancer therapy.