Subjects: Others
View times: 158
Submitted by:

Within three decades of fundamental findings in research on metal–organic frameworks (MOFs), a new family of hybrid materials known as gallate-based MOFs, consisting of metal salt and gallic acid, have been of great interest. Due to the fact that gallic acid is acknowledged to display a range of bioactivities, gallate-based MOFs have been initially expended in biomedical applications. Recently, gallate-based MOFs have been gradually acting as new alternative materials in chemical industrial applications, in which they were first reported for the adsorptive separation of light hydrocarbons. These porous materials have a bright future and can be kept in development for variety of applications in order to be applied in real industrial practices.

A metal–organic framework (MOF) is a porous hybrid organic-inorganic material that has a strong coordination bond between a node (metal) and organic linker. MOFs are comprised of metal-containing nodes that bond to organic linkers which results in well-defined crystalline structures [1]. MOFs can be practically designed and synthesized according to the building blocks that join together to build a framework [2]. Through the selection of suitable building blocks during synthesis, these porous materials with different shapes and functionalities can be designed for various applications [3]. The three-dimensionally ordered framework structures can make MOFs sufficiently robust to permit the removal of the adsorbed guest species, giving rise to permanent porosity [4]. The first MOFs with permanent porosity were introduced in 1995 by Yaghi and Li [5]. The great interest in designing novel MOFs is gradually growing, due to their exclusive structural and functional properties. Among the previously studied MOFs are MOF-74 [6], MOF-177 [7], MOF-5 [8], ZIF-8 [9], HKUST-1 [10], MIL-101 [11], IRMOF-1 [12], UiO-66 [13], Nu-1000[14], MFU-4 [15], NOTT-300 [16], and so on. In addition, MOFs are widely synthesized using the solvothermal method, with extensive washing process in order to maximize the effective pore activation [17].

Despite all the given advantages of MOFs, the major drawback for commercialization and industrial applications is the cost of MOFs, which will affect the scale-up production of MOFs on a long-term basis [29]. The choice of raw materials notably impacts large-scale production, because the price per kg of the final MOF products must meet the lowest possible price in order to be economically viable [30]. Linker is one of the most expensive materials in the production of MOFs, since it can reach up to 40% of the total production costs [31]. Gallic acid is known to have advantages over expensive organic linker due to low cost, low toxicity, easy availability, and natural abundance [32]. The previous study has already proven that gallic acid can act as a successful alternative organic linker in a new family of hybrid framework materials known as gallate-based MOFs or M-gallate [33]. This gallic acid is gained from the industrial-scale production of biomass and cost around USD 10/kg [34]. In addition, the entire synthetic process is environmentally friendly without the consumption of organic solvents [35]. Nonetheless, very few studies have been conducted on the applications of gallate-based MOFs in industry, as they have just started to gain recognition. At first, gallate-based MOFs were widely used in biomedical applications. A couple of years back, gallate-based MOFs gradually gained attention in small scopes of chemical applications, such as light hydrocarbon separations, due to their outstanding performance. Thus, gallic acid has the potential to be an excellent organic linker for gallate-based MOFs due to its environmentally and economically friendly nature.

Gallic acid is classified as a phenolic compound, chemically named as 3,4,5-trihydroxybenzoic acid [36][37]. The molecular dimension of gallic acid is a planar molecule, comprising of an aromatic ring surrounded by three hydroxyl groups and a carboxyl group [38][39]. This compound is a potential organic linker in forming organic frameworks, due to the availability of five oxygen atoms located at the opposite side of the molecule, in which there are slightly large gaps between the phenolic oxygens that are capable of chelating metal ions [40]. The other name of gallic acid is gallate, and its chemical structure (C7H6O5) is shown in Figure 1. 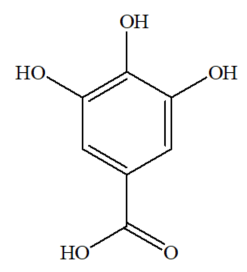 Polyphenols are known as secondary compounds and commonly found in the plant kingdom classified into four classes such as phenolic acids, flavonoids, stilbenes and lignans [41]. Phenolic compounds are essential for the main organoleptic characteristics of plant-derived foods and beverages, specifically for color and taste properties [42]. Phenolic acids are a diverse group reported from plants that consist of ferulic acid, synergic acid, ellagic acid, caffeic acid and so on [36]. One of the phenolic acids is gallic acid, which is available in various fruits, vegetables, wine, coffee and tea [36]. Gallic acid that can be found in plants is in the form of esters, free acids, hydrolysable tannins and catechin derivatives [36].

Gallic acid is a slightly colorless/yellow crystalline solid with melting point of 210 °C, and decomposition within the temperature range 235–240 °C [43]. It is soluble in water, ether, alcohol and glycerol, but insoluble in chloroform, benzene and ether petroleum [43]. In addition, this organic linker can form stable complexes with transition metal ions such as Fe(III), Co(II), Mn(II), Ni(II), Zn(II), Cu(II), and Cd(II) [38].

Gallic acid and its derivatives are considered to be natural products of the hydrolysis of tannins that are commonly found in plants such as green and black teas, oak, pomegranate husk and grape [44]. For practical applications, gallic acid is prepared through the breakdown of tannic acid by an enzyme known as tannase, a glycoprotein esterase [43]. The huge interest in this compound is due to its various biological effects, including anti-allergic [45], anti-inflammatory [46], antiviral [47], antifungal [48], antimicrobial [37], antimutagenic [49], cardioprotective [50], neuroprotective [51], and anticarcinogenic activities [52].

Gallate-based MOFs, designated as M-gallate, have gained researchers’ attention due to the easily accessible nature of gallic acid and their uncomplicated preparation [53]. These frameworks, that are prepared from the reaction of metal salts and gallic acid, will give chemical formulas of M(C7O5H4)·2H2O for divalent cations, and M(C7O5H3)·2H2O for trivalent cations [33]. One of the significant characteristics of the gallate-based MOFs is that they can contain both divalent and trivalent cations by maintaining the charge balance [40]. Gallate-based MOFs, such as Fe(C7H3O5)·2H2O and M(C7H4O5)·2H2O, (M = Mn2+, Co2+, Ni2+), are intriguing in this aspect, since they are inorganically bonded chains and also have the possibility to exhibit mixed valency through a process named cation doping [33]. In addition, gallate-based MOFs have been proven to have high stability against water and oxygen, as well as recyclability, since they can be applied under repetitive adsorption–desorption cycles which are important for real-world applications [54].

Gallate-based MOFs have been known since antiquity, in which iron gallate has been used as an ink and a dye due to its strong absorption in the visible region [40]. This pioneering application of gallate-based MOFs was introduced in historical iron gall ink (iron gallate) as a writing material. This kind of ink was used to record various necessary documents and drawings in human history, such as hand-written works [55]. Despite its historical interest, the chemical structure and composition have been subjects of concern. Hence, the study of its crystal structure performed in 1991 disclosed that it was a 1-D hybrid metal oxide, consisting of infinite chains of trans-corner-sharing FeO6 octahedra [56]. The historical colorant of iron gall ink resulted from a reaction of aqueous Fe(II) and gallic acid, resulting in an iron-gallate complex study [57]. Apart from that, the other early application of these solids can be found in the utilization of the lanthanide gallate-based compounds, which were used as the substrates for the thin film growth of superconductors [58]. Thus, the study regarding gallate-based MOFs has been progressed steadily throughout the years to illustrate their synthesis, crystal structures, magnetic properties, and thermal behavior [40].