Spermatogenesis is a complex biological process of germ cell proliferation and differentiation that produces a large number of spermatozoa in the seminiferous tubules. It contains three processes: mitosis of spermatogonia, meiosis of spermatocytes, and spermiogenesis, by which round spermatids transform to become the elongated spermatids [1] Successful spermatogenesis, which progresses through precisely timed and highly organized cycles, is crucial to produce spermatozoa continuously and maintain adult male fertility. In contrast, abnormal spermatogenesis usually results in male subfertility or infertility [2]. The fine communication between germ cells and somatic cells within seminiferous tubules is fundamental to normal spermatogenesis. Among them, the support and nutritional function of Sertoli cells and endocrine function of Leydig cells are particularly important [3][4].

Autophagy is a highly conserved catabolic process for cell degradation, which is lysosomal dependent and essential for maintaining cellular homeostasis. The degraded components need to be sequestrated by double-membrane vesicles called autophagosomes, degraded by lysosomal enzymes after fusing with lysosomes, and finally complete autophagy [4]. In the beginning, autophagy was thought to be non-selective, which is called bulk autophagy. However, an increasing amount of evidence shows that autophagy can selectively degrade misfolded proteins and damaged organelles. The main factors involved in selective autophagy include autophagy receptors and adaptor proteins, which connect substrates to autophagy devices. According to the different substrates, selective autophagy can be divided into various subcategories, such as mitochondria (mitophagy), liposome (lipophagy), endoplasmic reticulum (reticulophagy), pathogens (xenophagy), peroxisomes (pexophagy), ribosomes (ribophagy), and aggregated proteins (aggrephagy) [5]. 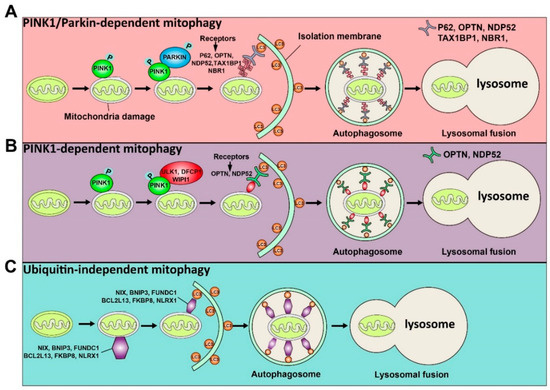 The lipid droplets (LDs), which are mainly made up of cholesteryl ester and triglycerides, are the main lipid storage form in living organisms. Its degradation can regulate the process of lipid metabolism to provide energy for cells. There are two main catabolic pathways to degrade LDs in response to nutrient limitation: lipolysis and lipophagy [22]. Lipolysis needs a large number of LD-related lipases to release lipids from LDs, the initiation of which needs adipose triglyceride lipase (ATGL) [23]. However, lipophagy, a process that releases fatty acids from LDs by autophagy, has more significant lipophagic activity during starvation compared to lipolysis [23][24]. In addition, lipophagy includes macrolipophagy and microlipophagy. It has been reported that SQSTM1/p62 (sequestosome-1/p62) protein is the key receptor for the specific recognition of LDs during macrolipophagy [25]. Interestingly, LDs can be recognized as a selective substrate and sequestered by the autophagosome, and degraded by hydrolase after combining with the lysosome, while in microlipophagy in yeast, LDs contact the vacuole (lysosome) directly with docking sites instead of being engulfed by the autophagosome [26]. Lipophagy is associated with fatty liver disease, obesity, renal cell carcinoma, and liver cancer cells [27][28]. Furthermore, lipophagy plays an essential role in energy metabolism and lipid homeostasis, and is not only closely related to hepatic diseases but also participates in the regulation of spermatogenesis [29]. We next focus on the understanding of lipophagy and summarize how lipophagy is involved in the regulation of spermatogenesis.

Lipophagy is regulated by many factors, such as Rab GTPase, transcription factors, hormones, and small molecules. For example, small Rab GTPase is involved in the regulation of fat-soluble proteins, and Rab GTPase can be used as a molecular switch cycling between active GTP and inactive GDP [30]. After nutrient depletion, the small GTPase on the LD surface will activate and switch to an active GTP state [31]. It is worth mentioning that this activated state will recruit the degradation devices (multivesicular bodies and lysosomes) to the vicinity of LD and degraded LD by lipophagy [32]. RAB protein is the most critical member of the Rab GTPase superfamily, and studies have found that Rab protein can affect lipid autophagy and metabolism [33][34]. Among them, RAB7 mainly participates in the process of autophagosomal maturation and intracellular transport [33] and functions in the fusion of autophagosome membranes and late endocytic membranes with the help of SNARE proteins and HOPS tethering complex [35]. Besides, it has been well established that RAB10 on the LD surface will be activated during starvation [34]. Additionally, Rab10 can promote the degradation of LD through lipophagy by interacting with EH-domain-binding protein 1 and membrane-deforming ATPase EHD2 [34]. Moreover, Rab10 knockdown results in increased LD accumulation in hepatocytes [34]. Additionally, RAB32 has been shown to co-localize with autophagy markers in Drosophila fat body [36]. In addition to RAB proteins, transcription factors can be involved in the regulation of lipid metabolism. For instance, transcriptional factor EB (TFEB) can induce lipophagy during lipid metabolism via the PPARα (Peroxisome proliferator-activated receptor alpha) and PGC1α (Peroxisome proliferator-activated receptor gamma coactivator 1alpha) signaling pathways [37]. Another transcriptional factor FOXO1 (Forkhead box protein O1) can trigger lipophagy by upregulating lysosomal acid lipase (LAL) and the autophagy gene Atg14 in adipocytes [38]. In addition, it is well known that the mTOR signaling pathway, which is involved in regulation of autophagy, can inhibit the initiation of autophagy and participate in the regulation of lipophagy as a modulator in response to the change of nutrients and hormones, such as glucose, amino acids, and insulin [8]. The activity of lipid metabolism and lipophagy will increase in rapamycin (mTOR signaling pathway inhibitor)-treated hepatocytes [39]. Interestingly, some small molecules can modulate lipophagy, such as caffeine, tetrandrine, the dietary polyphenol bergamot, and the red wine bioactive resveratrol [28].

Infertility is defined as failing to achieve a clinical pregnancy after 12 months or more of regular intercourse without contraception [40]. In recent years, infertility has become a global public health issue, affecting 15% of all reproductive-age couples. Among these, male factors account for ~25% of cases of infertility cases, especially abnormal semen quality [41][42]. More and more studies believe that the components of diet and nutrients may be an important factor affecting sperm quality and fertility [42][43]. For instance, diets rich in calories, trans-fatty acids (TFAs), saturated fats, or cholesterol have a harmful role in spermatogenesis and male fertility [44][45][46]. These bad diet habits often lead to obesity, related to impaired fertility [47][48]. Previous studies have demonstrated that autophagy was increased in obese individuals by feeding a high-fat diet (HFD) [49][50]. Jing Yang’s group investigated the role of autophagy in HFD-induced spermatogenesis deficiency [51]. They found that the level of autophagy increased in HFD mice, and spermatogenesis and male fertility were also disrupted in HFD mice. To know the correlation between autophagy and spermatogenesis deficiency in HFD mice, they inhibited and induced autophagy by injecting CQ and RAP intraperitoneally. They found that HFD mice subjected to CQ, an inhibitor of autophagy, showed improved spermatogenesis and decreased infertility. Simultaneously, autophagy was also overactivated in sperm samples from obese subfertile male patients [51]. Inhibition of excessive autophagy could protect against HFD-induced spermatogenesis deficiency and male infertility. This can provide a new clinical therapeutic method for increasing semen quality and male infertility.