Swabs are used to collect body fluid samples for testing in the forensic and clinical settings. However, swabs made of different materials and are differently shaped may impact the DNA that can be recovered from the body fluids absorbed by the swabs. Recovering a higher quantity of DNA can be important for DNA typing and obtaining a full profile, especially in low template samples. In this study, swabs made of cotton, paper and foam materials from various commercial suppliers were evaluated to determine which swab released the highest quantity of DNA from a fifty-microliter sample of blood applied to the swab. DNA extraction was performed using the phenol chloroform-isoamyl alcohol method and human DNA was quantified using a quantitative real-time PCR assay using the Plexor HY human quantification kit. Overall, Puritan cotton-tipped swabs performed best in this study.

Swabs are used to collect buccal cells for clinical studies and diagnoses. They are also used to collect reference samples and evidence samples from surfaces in forensic cases. There are several different types of swabs available from commercial suppliers for different purposes, resulting in a variety of available designs, shapes, and sizes. Swabs can be made from various fabrics including cotton, foam, paper, as well as polyester, rayon and nylon although the most common type is cotton. Swabs vary in their thickness, fiber diameter and coarseness, weave, number of layers, surface area, and residual chemicals from manufacture which can affect the depth of saturation and circumference of body fluids in the swab and the ability of the swab fibers to release the cellular material. Sample release and preservation is especially important in forensics in which evidence samples are limited.

DNA recovery from some swabs and paper collection devices have been evaluated in previous studies but the relative DNA recovery from several specific swab types has not been disseminated in one study. DNA recovery is typically assessed using quantitative (polymerase chain reaction) PCR and DNA fingerprinting techniques. Many studies focus only on one type of swab and compare the DNA recovery to another product type such as FTA cards or authors do not indicate which specific swabs were used; most manufacturers market a diverse assortment of DNA collection products. As an example, in one study the Invisorb spin swab kit recovered DNA from skin and sperm cells as assayed using real-time polymerase chain reaction (PCR) and further analyzed using to produce short tandem repeat (STR) DNA profiles using the Powerplex ES and the AmpFlSTR IdentifilerTM kits.[1] In another study, blood and buccal cell recovery was analyzed using nylon and cotton-tipped swabs using DNA quantitation and the quality of the extracts was analyzed using STR DNA typing.[2] In a study by Ghatak et al.[3], DNA was recovered from blood and buccal cells on cotton swabs and quantitated using UV-vis spectroscopy and determined to be amplifiable using a PCR restriction fragment length polymorphism (RFLP) PCR assay targeting the mtDNA D-loop region. Milne et al.[4] evaluated DNA recovery from buccal swabs and buccal cells on 1.2 mm punches from micro FTA cards using quantitative real-time PCR.

In a U.S. Department of Justice funded project, several swabs including cotton, modified cellulose, foam, nylon, polyester and rayon‐tipped swabs were evaluated for reproducibility of cell collection, ease of collection, tolerance to collection protocol for implementation in an integrated DNA typing system, liquid absorption, and use for forensic applications.[5] Cotton swabs performed best followed by blotting paper, foam and other matrices.[5] When four donors were evaluated, recovery from each swab and matrix type varied by donor; large variation was observed among the materials for each donor.[5] As cotton is the most commonly used material in forensics community and its comparable efficiency to other materials and devices, the Bode SecurSwab was adopted.[5] In a study by Brownlow et al., a cotton flocked swab combined with Qiagen spin-column extractions was shown to be most effective when compared to a nylon flocked swab.[6] In a study by Mawlood et al., a forensiX swab with drying system was found to perform better than the Eurotube® Delta lab cotton swab with saliva.[7] In another study, the 4N6FLOQSwabsTM composed of nylon strands performed better than cotton swabs when extracted using the PrepFiler® kit and NAOTM.[8]

In this study, nine different types of swabs from the suppliers Arrowhead Forensics, Fitzco, Isohelix, Puritan, and Whatman were evaluated using the phenol chloroform-isoamyl alcohol DNA extraction methods to determine which led to the highest yield of DNA from a fifty-microliter sample of blood. This method was chosen as the DNA recovery is not limited by the extraction device threshold as is common in automated and kit-based approaches and it has been shown to yield high quantities of high quality DNA.[9] DNA recovery was determined using UV-vis spectroscopy and a multiplex real-time quantitative PCR assay. The swabs included several cotton head swabs of various types from Puritan, the Isohelix flat head unique swab matrix swab, a split head cotton swab from Fitzco, the OmniSwab flat head, push-off swab made of multi-layered absorbent paper, a foam swab by Puritan, and round foam buccal swabs from Arrowhead Forensics.

DNA extraction was performed using the phenol-chloroform isoamyl alcohol (PCIA) organic extraction method over a period of two days with an overnight incubation.[10][11] In brief, 300 µl of organic stain extraction buffer (OSEB), 12 µL of 1M DTT, and 4 µL of 10 mg/mL Proteinase K were added to a microcentrifuge tube containing each sample, vortexed for 2-5 seconds and incubated overnight at 56 °C. The following day, the swab cuttings were added to a spin basket and centrifuged into a new, autoclaved microcentrifuge tube. The swab and basket were discarded and 300 µL of PCIA (25:24:1) reagent was added. The samples were then vortexed briefly until a milky emulsion was present, then centrifuged for three minutes at maximum speed to separate the layers. The aqueous (top) layer was removed carefully to avoid carrying over phenol and added to a Microcon® centrifugal filter device (Millipore, Keene, NH, USA) placed in a new microcentrifuge wet with 100 µL of 10 mM Tris-0.1mM EDTA, pH 8.0 (TE) buffer. The samples were centrifuged for ten minutes at 2500 xg. 100 µL of TE buffer was added to the top of the filter to wash, and then was centrifuged again for ten minutes as above. To elute the DNA, 50 µL of TE buffer was added to the top, left to saturate for five seconds, and then the filter was inverted into new microcentrifuge tube. The tube was centrifuged for five minutes, and then the Microcon was discarded. The extracts were frozen in a -20°C freezer prior to DNA quantitation.

DNA extraction was performed using the organic PCIA method and a preliminary quantitation of the recovered DNA was performed using a NanoDrop UV-vis spectrophotometer using the nucleic acid dsDNA setting. Although laborious, the PCIA method was selected due to its ability to yield high quantities of DNA.[10] DNA was detected in all extracts using UV-vis spectroscopy so quantitative PCR was used to detect amplifiable human DNA using the Plexor HY commercial kit. Trace phenol could have led to a false positive determination of DNA using the UV-vis method as it is non-specific and phenol (λmax = 271 nm) absorbs in a similar region as DNA (λmax = 260 nm).[12]

The DNA standard included in the Plexor HY kit was diluted and analyzed using the Plexor HY assay according to the manufacturer’s instructions. Plexor HY is a sensitive real-time PCR DNA quantitation method that detects amplification of an autosomal (total human) 99-bp multicopy target on chromosome 17 and male (Y chromosome) 133-bp multicopy target and includes an internal positive control (IPC) 150-bp target to detect PCR inhibition.[13] Two replicates were performed and input DNA concentrations ranged from 0.003125 ng to 50 ng reflecting a 5-log range. As expected, as the concentration of the DNA decreased, the threshold cycle increased. The slope for the autosome DNA target was -3.297 and the R2 was 0.99020 (Figure 1). An R2 of 1 indicates that the concentration of the DNA extracted from the samples can perfectly be predicted from the standard curve. The experimental R2 of 0.99020 provides good confidence in correlating the two values. The efficiency was 1.01 or 101%. The efficiency is the rate at which the PCR amplicon is copied. A 100% efficiency indicates that the amplicon is doubled in quantity in the geometric phase of the amplification. The efficiency of 101% indicates high sensitivity over the concentration range. No PCR inhibition was detected. 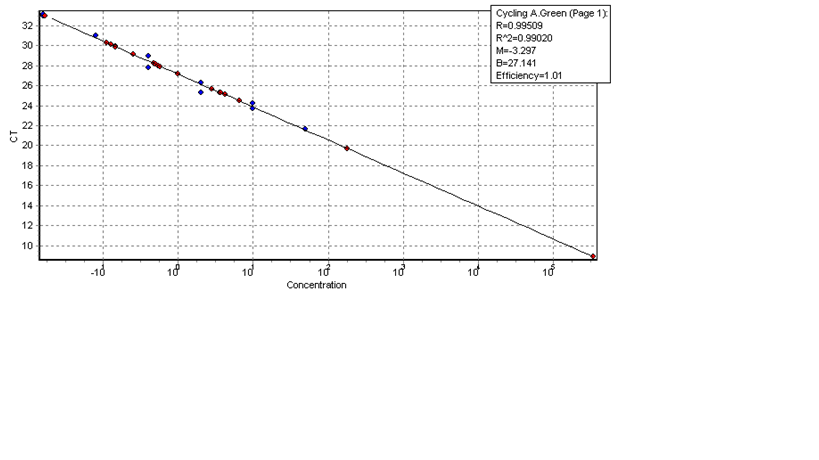 Based on the values computed using the standard curve from the Plexor HY assay, DNA was recovered from all of the swab types except the OmniSwab flat-head paper although, for some swabs, one replicate did not yield quantifiable DNA (Figure 2). From the real-time PCR assay results, the most consistent DNA recovery was observed with the Isohelix flat-head matrix swab. The highest concentrations of DNA were recovered using the PurWraps sterile cotton tipped applicator (25-806 1PC) swab. Overall, the cotton swabs performed better than the foam or paper tipped swabs although some of the cotton swabs performed similarly to the other material types, although the results may vary with other donors as shown in an DOJ study.[5] Cotton swabs were used to recover DNA from control and environmental chewing gum and the PCIA extraction resulted in the highest yields for the environmental gum.[14] 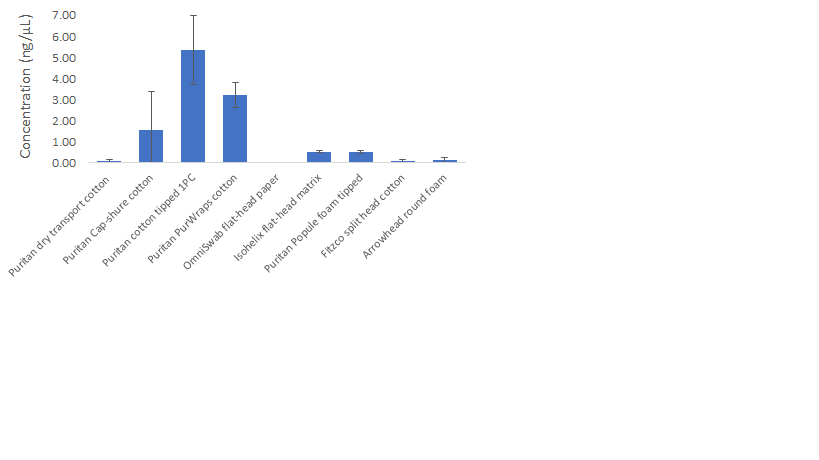 There are numerous swabs and DNA collection devices on the market from commercial manufacturers. DNA recovery from swabs varied by manufacturer and fabric types. Overall, the highest quantity of DNA was recovered from cotton swabs. The highest DNA recovery was observed from the PurWraps sterile cotton tipped applicator (25-806 1PC) swabs. Based upon the results and swabs tested, cotton swabs are recommended for sampling and collecting body fluids for forensic applications. As new products become available, they should be evaluated by labs to determine DNA recovery prior to inclusion in the standard operating procedure (SOP) so the best swab can be used for the evidence collection and sampling application. Additional swabs including degradable swabs should be tested in future studies with multiple donors and other body fluids.