Biodegradable plastics can make an important contribution to the struggle against increasing environmental pollution through plastics. This entry provides an overview of the main environmental conditions in which biodegradation takes place and then presents the degradability of numerous polymers.

Plastics have become an indispensable part of everyday life. The various strengths of plastics come into their own in a wide variety of applications—packaging, clothing, car tires and much more. At the same time, however, the often-desired resistance to environmental influences and other stresses represents a major challenge. Plastic waste is increasingly found in the oceans, in rivers and in the ground, mostly as a result of human misconduct. Animals and humans ingest plastic particles with their food; the consequences are not yet foreseeable[1]. Rethinking of society is required in order to reduce the further input of plastics into the environment[2].

Biological degradation is understood as the degradation of complex organic matter into carbon dioxide, methane, water, minerals and new biomass by means of a biological metabolic process[7]. This is achieved by the enzymatic activity of certain microorganisms, in particular bacteria and fungi, which first colonize the surface of the plastic and secrete a biofilm of specific enzymes. The excreted enzymes split the long polymer chains into short chain fragments, which are transported by means of tunnel proteins in the cell wall into the interior of the microorganism where they can be metabolized[10].

The degradation behavior depends on numerous factors, which are shown in Table 1.

In summary, these factors can be subdivided into the physicochemical conditions that are determined by the environment, the material properties of the polymer to be metabolized and the type of microorganisms present. Only if all listed conditions are measured and controlled, a reliable statement on the degradability of a material and a comparison between degradation processes are possible.

The detailed presentation of all factors goes beyond the scope of one single review. In the environment, however, certain environments with comparable conditions for biodegradation can be identified, which will be presented in the following and considered further in this summary.

The different environmental conditions with their most important parameters for biological degradation are summarized graphically in Figure 1. 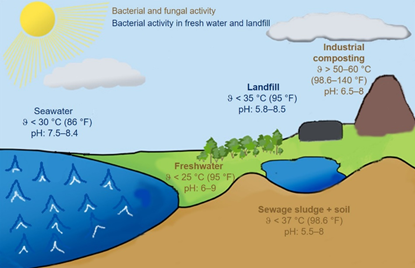 For a direct comparison of corresponding studies, all of the above-mentioned parameters would always have to be investigated and reported. Since this is rarely the case, the statements in this review are to be understood only as a guideline.

This review presents a detailed overview of the degradation of a variety of biodegradable polymers in the environments presented in the previous section. Polymers are often compounded for better processability or supplementary functionalities with additives (see Scheme 1).

Scheme 1. The Value Chain from a Monomer to a Plastic Component[10].

One has to keep in mind that these can also influence the biodegradation of matrix polymers. Since PLA is currently the focus of attention due to its ready availability, and the polyhydroxyalkanoates PHB and PHBV due to its ready degradability, these polymers are comprehensively presented. The remaining polymers are evaluated briefly. Due to the active research landscape in the field of biopolymers, this is only a snapshot and does not claim that only these polymers are biodegradable.

At the beginning of this review, the large number of parameters which influence the biological degradation of polymers was discussed. The results from various experimental studies presented in the previous section show the difficulty in comparing these studies.

In order to create analogies, clearly defined conditions are necessary. Due to the complexity and the high regional dependence, it is generally almost impossible to carry out reproducible investigations in the environment. In the laboratory, the necessary parameters are easier to record and control, so that standardized laboratory tests are advantageous for a comparison of the results. It is also indispensable to consider a defined period of time, as it is usually not known whether the degradation is linear or if the degradation rate changes over time. There are p. ex. studies which propose a three-step degradation process for PHB, whereas only two stages are distinguishable for PCL[131].

Numerous studies use the parameter of total mass loss to assess biodegradability. The mass loss, however, is not only caused by degradation but is also influenced by other parameters, such as currents, UV light and thermal or mechanical stress. According to ASTM D6400[6], ISO 14855[7] and EN 13432:2000[5], biological degradation is defined by the amount of CO2 released. Further evaluation methods are: the measurement of the increase in surface, the microbial growth, the change in molar mass, chemical element analysis or a comparison of the mechanical characteristic values.

Another aspect that has seldom received enough attention in previous studies is the sample material used. In addition to the chemical composition or the indication of a clear type designation, the geometric shape of the sample also has a major influence on the duration of degradation. A powder offers a high surface-to-volume ratio, which means that more microorganisms can settle on the polymer surface than in a compact tensile test specimen. Even films differ in thickness and surface roughness and thus offer different surface qualities for the colonization by microorganisms.

Plastics in the environment have long since become a topic of worldwide interest. Plastics drift in the world’s oceans, pollute water and soil and have now been detected in remote areas such as the Arctic. This development has also left its mark on humans, even though the health consequences of this exposure to plastic particles cannot be foreseen. Biodegradable plastics can make a positive contribution, at least in applications that inevitably end up in the environment.

The biological degradation depends on numerous environmental conditions; these are in addition to the prevailing physico-chemical conditions and the activity of existing microorganisms, especially the material properties of the considered plastic component. However, the most important environments can be summarized. The most favorable degradation conditions are found in composting environments. In home compost, as well as in industrial composting plants, there is a large microbial diversity with high activity, especially with a good oxygen supply. In the latter case, there are also increased temperatures, which further promote the activity of the microorganisms. Numerous microorganisms are still present in the soil and in sewage sludge, but the temperatures are partly subject to large regional fluctuations. Aqueous environments (fresh and seawater) show the lowest biological activity, because the water provides a strong dilution. In landfills, biological degradation takes place at a slower rate, and under the exclusion of oxygen, and is strongly dependent on the mode of operation.

The aim of this review was to compare the biodegradability of biopolymers in various environments. The results are summarized in Figure 2. 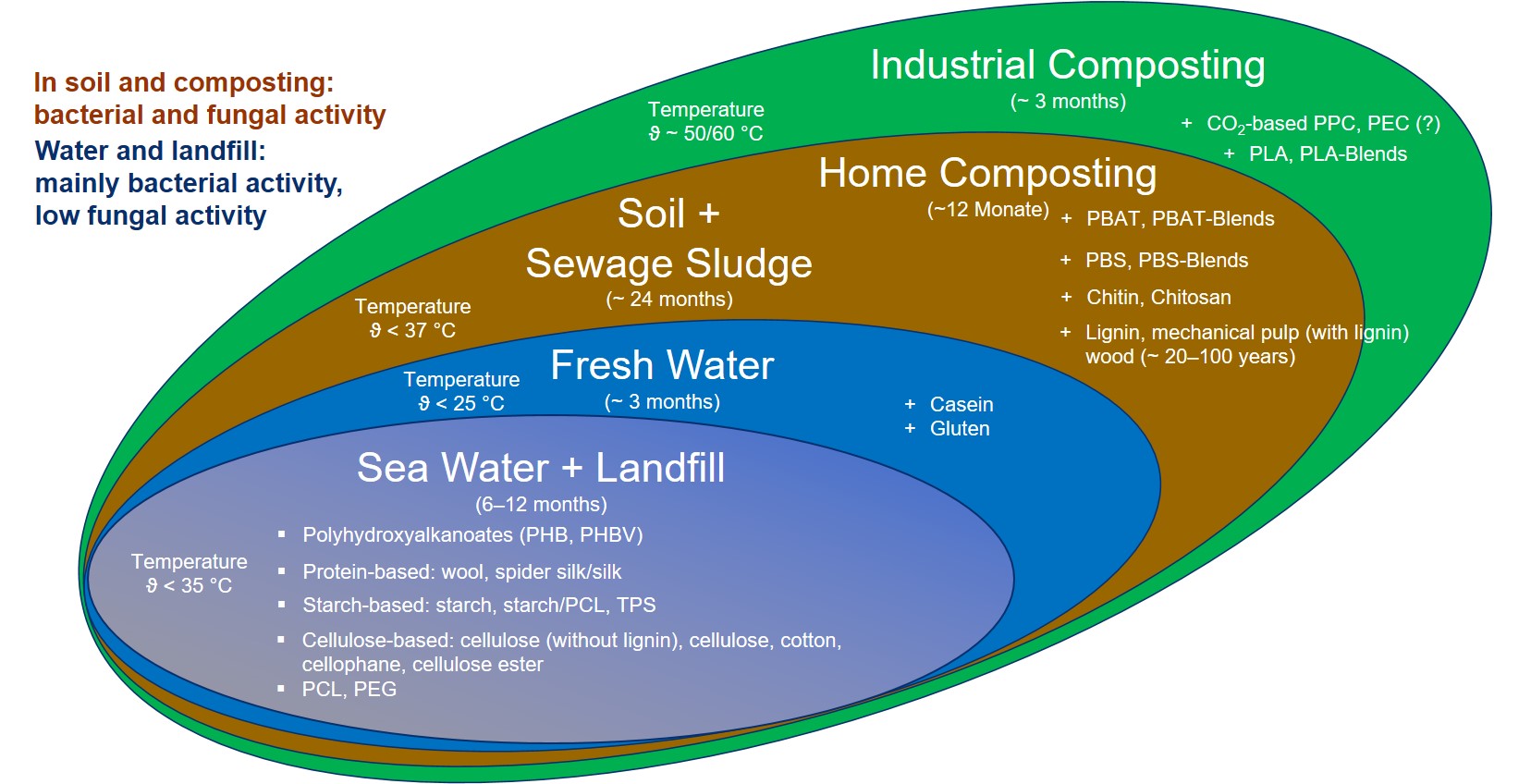 However, despite extensive literature on the subject, it is almost impossible to make generally valid statements. As mentioned above, the decisive factors for biodegradation are manifold and rarely documented in detail. In most cases, the available results differ or even contradict each other, making it impossible to specify a defined degradation period. In order to be able to make reliable statements, it is essential to clearly define specifications with regard to physico-chemical conditions, performance, test specimen geometry, etc. Possible standardizations are offered by the guidelines presented in the Appendix. In particular, however, the measured target must be standardized. Due to the aforementioned influencing factors on the total mass, only the determination of the biological degradation via the CO2 release allows a direct conclusion on the actual metabolism of a polymer.

This comprehensive research of reviewed magazines was made after intensive discussions with the experts Michael Carus, nova institut Hürth, and Bruno de Wilde, OWS Gent. In order to give an overview of the breadth of the information gathered in this summary, the entire literature on which this work is based is given below.