According to the International Union for Conservation of Nature (IUCN), an “invasive alien species” is an exotic species that establishes itself in a natural or semi-natural ecosystem or habitat, becoming an agent of change and a threat to diversity native biological.

Therefore, invasive species are those capable of successfully reproducing and forming self-sufficient populations in an ecosystem that is not theirs. When this happens, we say that they have "naturalized", which can have disastrous consequences for native (native) species.

Some invasive alien species are unable to survive and reproduce on their own, so they end up disappearing from the ecosystem and do not endanger native biodiversity. In this case, they are not considered invasive species, only introduced.

Seaweeds' ecological relevance has been acknowledged by the scientific community through the assessment of the ecosystem services they provide, which directly or indirectly support human well-being, namely regulating, provisioning, and cultural services [1][2].

Algae play a pivotal regulatory role in the aquatic environment, being sources of primary and secondary production, providing protection to coastal zones, and as nursery areas [3]. Moreover, seaweeds are a food source for many aquatic organisms, supporting provisioning services for a wide range of invertebrates [4]. Furthermore, seaweeds are part of cultural heritage and distinctiveness in each area, presenting economic value for society [5].

However, these ecosystems are currently under threat due to climatic changes, such as ocean acidification or the increasing seawater temperature [6]. Despite that, anthropogenic pollution nodes are major stressors that affect the structure and functioning of aquatic environments. For instance, eutrophication is a phenomenon provoked by the discharge of effluents with a high inorganic load (i.e., phosphorus, nitrogen, nitrate, nitrite) that can lead to eutrophication. Thus, the excess of nutrients will lead to the occurrence of algal blooms, giving an advantage to opportunistic algae that will affect the structure of the community and its primary productivity [7]. Regarding the available resources, non-indigenous species (NIS) usually are more effective when using them than native species [8]. However, NIS presence can have negative, positive, or neutral effects on the ecosystems where they are integrated [9]. Still, the introduction of exotic species in marine ecosystems can often lead to severe changes in ecosystem functioning. Among the vectors which favored the introduction of exotic seaweeds related to marine traffic rising [10] are, namely, through the discharge of ballast waters and biofouling on recreational boats or cargo ships hulls [11][12][13]. Another possible introduction vector is associated with the aquaculture, importation, and commercialization of marine organisms, namely mollusks [14]. Moreover, it is still found exotic and/or invasive species commercially available in the European aquarium trade markets, such as Caulerpa racemosa and Caulerpa taxifolia [15].

Whenever exotic seaweed species are introduced in a different geographic area and if the biotic and abiotic conditions allow it, these species can exhibit an invasive behavior. Moreover, a set of characteristics are needed to consider it an invasive seaweed species, commonly related to opportunistic traits such, such as a fast growth rate, dynamic life cycle, high recruitment rate, physiology, size, and fitness [3][16][17][18]. However, the intrinsic mechanisms associated with the biologic invasion's success are not yet fully understood due to their complexity [3]. For these reasons, macroalgal marine invaders are considered a threat to coastal and estuarine environments.

The Iberian Peninsula macroalgal community has also been a target of the introduction of several exotic seaweed species (Table 1), in which some of them are well established, exhibiting a widespread distribution in this area and invasive behavior.

Against this scenario, it urges the need to mitigate the impacts of seaweeds invasions in coastal and estuarine ecosystems, prioritizing the mapping of exotic seaweed species and comprehend the mechanisms which allow the success or failure of the invasion in order to take control and conservation measures [17][28][29].

Among the several adaptative advantages of invasive seaweeds, their high growth rate makes them suitable to feedstock supply for industrial exploitation.

In marine ecosystems, seaweeds that belong to the phylum Rhodophyta constitute a wide taxonomic diversity [30]. Among the exotic seaweeds registered on the Iberian Peninsula, Pyropia suborbiculata (Kjellman) (J.E. Sutherland, H.G. Choi, M.S. Hwang and W.A. Nelson 2011 it is an Asiatic Bangiales), due to its high tolerance to the variation of physico-chemical conditions, is now widespread throughout the American, Australian, and European shoreline [31][32][33]. However, the first records of P. suborbiculata in the Atlantic Ocean were misidentified with Neopyropia yezoensis M.S. Hwang and H.G. Choi (formerly Pyropia yezoensis) [34]. Through molecular analysis, in 2005, it was possible to genetically distinguish these two seaweed species [35]. More recently, researchers found that P. suborbiculata is well established on the Iberian Peninsula and is genetically similar to the population from the Pacific Ocean, suggesting that the presence of this exotic seaweed in the Northwest Atlantic is probably through marine shipping [31][36]. In contrast, P. suborbiculata is produced through aquaculture and is authorized and considered safe for human consumption in the United States of America [37][38]. In fact, this seaweed can have a significant role in the daily diet (Figure 1) and can be used fresh or dried, milled, and then utilized as a flavor enhancer [39]. 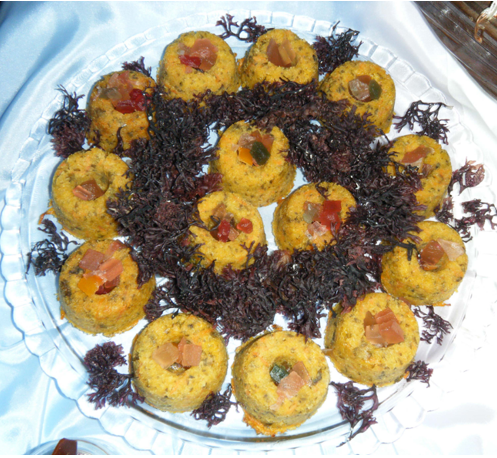 However, it is in the Asiatic region that this seaweed currently assumes a high economic interest, being considered an important marine crop for food feedstock [40][41]. In these countries, seaweeds which belongs to Pyropia/ Porphyra/ Neopyropia genus are highly consumed by the population [42]. Therefore, P. suborbiculata is also a potential candidate for food industry feedstock due to its protein (11.2% DW), lipids (0.3% DW), and carbohydrates (31.6% DW) content [43].

The health benefits that this food resource presents, lead to increased customer demand, which allowed a sales volume increase and the global economic expansion of Pyropia/Porphyra commercialization [44].

Another introduced red seaweed native from Japan, Agarophyton vermiculophyllum (Ohmi) Gurgel, J.N. Norris et Fredericq 2018 (previously known as Gracilaria vermiculophylla) (Figure 2), has invaded estuaries throughout the whole world. Although the presence of this algae was underrated in several areas due to the morphological similarity with native species Gracilaria gracilis [49], many signs of progress have been made through genetic analysis in order to distinguish them [50][51].