Snake ‘dry bites’ are characterized by the absence of venom being injected into the victim during a snakebite incident. The dry bite mechanism and diagnosis are quite complex, and the lack of envenoming symptoms in these cases may be misinterpreted as a miraculous treatment or as proof that the bite from the perpetrating snake species is rather harmless.

The anatomy of venomous snakes is diverse, but some aspects are universal [1]. All venomous snakes have similar venom delivery apparatuses comprised of a set of fangs, venom ducts, a pair of accessory glands, and a pair of postorbital glands, in which venom is produced. These venom glands are comprised of three major cell types: basal cells, conical mitochondria-rich cells, and secretory cells, which produce the venom (Figure 1).  Finally, the apparatus ends with fangs, which are cone-shaped, tapered, and are usually curved, essentially making them into hollow venom delivering tubes [2]. Fangs can be replaced if lost or damaged, and some species even have reserve fangs that remain in a suspended and immature state until they are stimulated to develop [3]. The fangs are specialized for venom delivery, and some fangs have specialized even further to allow the snake to spit venom. The fangs can occupy various positions on the upper jaw but are always found on the maxilla. 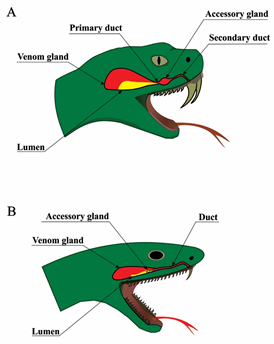 Figure 1. Snake venom delivery systems. Schematic anatomy of snake venom delivery systems. (A) Viperidae venom system: The venom gland is triangular and large; the lumen is voluminous and can store high quantities of venom; the lumen forms the primary duct, which is connected to an accessory gland and finally to the secondary duct and the fang. (B) Elapidae venom system: The venom gland is oval the lumen is narrow, and the majority of venom is stored in the secretory cells rather than the lumen; the accessory gland is placed in the distal part of the venom gland and has only one duct.

The diagnosis of snakebite envenoming can be a complicated task or a comparatively simple one. It all depends on the diversity of venomous snakes in the area, whether the snake was seen, how much time has elapsed between the bite and medical intervention, which clinical manifestations (if any) develop, which tools and assays are available to support diagnosis, and how much experience the treating physician has with clinical management of this highly neglected disease. In general, snakebite diagnosis is often based on a combination of patient history and a syndromic approach, supported by national guidelines and assays assessing e.g., serum biochemistry, coagulopathy (for example by measuring clotting time), and renal function [4]. The diagnosis of a dry bite is generally made retrospectively, once it has been confirmed that the bite was sustained from a venomous snake and that no envenoming occurred. For this reason, the same diagnostic strategies are used for dry bites as for wet bites.

To confirm the diagnosis of a dry bite, it must be ascertained that the responsible snake was venomous. In cases where the snake was photographed or killed and brought to the clinic, it might be possible to have an expert herpetologist identify it [4]. This can rule out bites from non-venomous snakes, even those closely resembling their venomous brethren due to biomimicry. The presence of one or two puncture wounds left by a fang or set of fangs can similarly indicate a bite from a venomous snake, as these marks will often be distinct from those left by non-venomous snakes, which tend to consist of multiple smaller puncture wounds arranged in a semi-circle. While identifying the offending snake as a non-venomous species excludes the possibility of envenoming and dry bite, it should be noted that ‘non-venomous’ does not equate to being harmless. Bite wounds from venomous and non-venomous snakes alike may be contaminated with the snake’s oral flora and can cause non-venom-related illness and discomfort [5]. Snakebites can cause behaviors, which may initially be mistaken for symptoms of toxicity. For example, the bitten person might panic, which can result in hyperventilation, syncope, vomiting, and other clinical features, which can also be observed in some cases of systemic envenoming [6][5][7].

Snake-related factors are responsible for the majority of cases of dry bites (Figure 2), with failure to deliver venom being the main one. Failure to inject venom can in turn be caused by viral infections, physical agents, traumas during defense, excessive pressure on the venom glands (i.e., during manual extraction in captivity), and any other inflammatory response [8]. Therefore, venom gland tissue damage will result in empty venom glands and, consequently, in dry bites. Calcification of fangs and obstruction of the secondary venom ducts can also result in a dry bite. Aged snakes often present these alterations [9]. Mechanical failure resulting in inefficient lunge of the fangs to deliver the venom from the venom sack to the bite site can be also responsible for the phenomenon [4]. 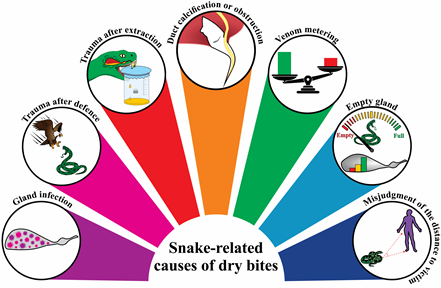 Although less explored, human-related actions are also responsible for dry bites. Snakes instill a deep-rooted fear in many people, which can cause them to make sudden movements in an attempt to escape. Such swift movements at the moment of the bite can result in incomplete penetration of the skin by the snake’s fangs, resulting in a dry bite [10]. Additionally, some clothing materials can obstruct bites. For instance, denim clothing has been demonstrated to reduce the venom release by up to 66% during a bite [11]. Wearing shoes and boots, or any other protective footwear, instead of sandals, can also prevent the venom from being injected into the body of the victim, thereby resulting in a dry bite.

It has been proposed that, in rare cases, clinical manifestations of venomous wet snakebites can go unnoticed and cause the bite to be misinterpreted as a dry bite due to the natural immunity of some victims [12][13]. Some studies have demonstrated the presence of high titers of specific antibodies against toxins from viper venoms in individuals previously and repeatedly exposed to snakebites in the Amazon region, suggesting that there may be some degree of protection against morbidity and mortality in certain individuals [14][15][16][17]. This situation would theoretically imply asymptomatic or oligosymptomatic cases of snakebite envenoming in naturally immunized individuals. However, such cases have never been demonstrated in well-designed cohorts in the region. Likewise, studies have suggested that humans can endocytose venom toxins through antigen presenting cells, such as dendritic cells and macrophages, resulting in the activation of the acquired immunity [18]. A study conducted in Nigeria demonstrated that persistent and high levels of IgG antibodies have a protective role against subsequent snakebites [14]. On the other hand, even with detectable titres of antibodies, people who are bitten twice by snakes of the same genus still develop symptoms (e.g., myotoxicity) [19]. Thus, it may be speculated that the potential protective effects of circulating antibodies in recurrent snakebite victims (and self-immunizers) that have developed an adaptive immune response may be dependent on the immunogenicity of the venom toxins of the perpetrating snake species. It is possible that victims bitten by snakes possessing venoms, where the medically most important toxins are low molecular weight toxins, such as three-finger toxins, dendrotoxins, or phospholipases A2, are less likely to develop immunity [20][21].

4. Clinical Features of Dry Bites: To Treat or Not to Treat?

In the case of dry bites, patients can report pain, usually of light intensity. Local bleeding and erythema can be observed as well, the fang marks may or may not be present, and the systemic signs and changes in laboratory parameters will be absent. It is relevant to note that often, due to the stress caused by the encounter with a snake, the patient can present himself in health services with signs of anxiety, such as tachycardia and tachypnea. It is up to the healthcare professional, at the time of collecting the patient’s clinical history and anamnesis, at admission, and during the observation period of the patient in the hospital environment, to discriminate whether systemic signs could be associated with envenoming (Figure 3). Likewise, the absence of signs and symptoms at the time of admission does not necessarily mean that the patient suffered a dry bite, but that insufficient time has passed for the patient to develop signs of envenoming. Thus, the final diagnosis of a dry bite is always performed retrospectively after confirmation of the absence of local or systemic signs and symptoms even after a follow-up, which may be required up to 12 h later, depending on the aggressing snake species [9]. There is a possibility that actions taken by the patient prior to hospital admission, such as the use of anti-inflammatory drugs and even over-the-counter medicines, can delay the appearance of envenoming signs, reinforcing the need for follow-ups.

In tropical areas, there are many reports of individuals living in places with high exposure to snakebites, who did not seek medical assistance because there was an absence of signs indicating that the patients were at risk. These cases are, however, poorly investigated. For instance, in the Brazilian Amazon, many snakebites are caused by snakes of no medical importance, as their bites only lead to minor trauma with or without fang marks [22]. If the clinical investigation is based only on the report of individuals who have had conditions of this severity during their lifetime, incorrect conclusions can easily be drawn. In some situations, the bitten individual may not have seen the snake or did not observe characteristics that would allow the investigator to identify it. In addition, there are a number of inconsistencies in the nomenclature of some venomous and non-venomous snakes due to similar characteristics (e.g., color and body shape). Therefore, non-venomous snakes are often commonly referred to by the same name as venomous snakes. 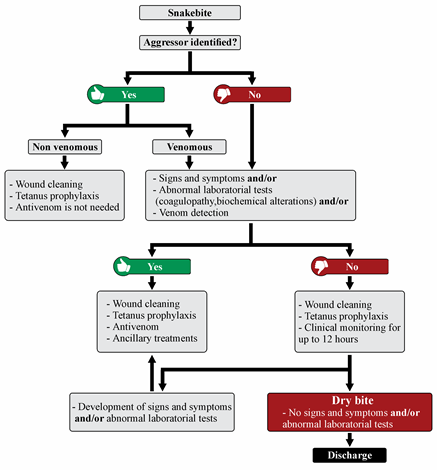 Figure 3. Flow chart on diagnosis and treatment of snake envenomings and dry bites.