The hallmark of type 1 diabetes (T1D) is T cell-mediated autoimmune destruction of pancreatic beta cells, leading to insulin deficiency, elevated blood glucose concentrations, and life-long need for exogenous insulin therapy. Globally, the annual number of new cases of T1D is rising, and in the under-20 age group alone, numbers are fast approaching 100,000 (www.diabetesatlas.org). The incidence rate varies between countries and ranges from 6% in sub-Saharan Africa to 77% in some parts of Scandinavia[1]; altogether another five million people are expected to be diagnosed with T1D by 2050[2], with profound implications for healthcare systems globally and the potential for a staggering socio-economic impact. Staying well with T1D requires normoglycemia to be achieved and maintained, but this goal is not currently achievable for many patients using existing treatment strategies[3]. Understanding the intrinsic and extrinsic factors underlying the development and progression of T1D is necessary for the development of novel intervention therapies that could delay or even prevent clinical progression in individuals susceptible to T1D or be used to treat/manage glycemic excursions in those worst affected.

Despite ongoing research, dissecting the etiology of T1D has proven a herculean task. Genetic studies have recognized more than 60 regions (loci) associated with or predisposing to T1D; the first and still strongest reported genetic association is with the human leukocyte antigen HLA region[4][5], while the second most significant T1D genetic association is with insulin gene promoter polymorphism[6]. Even so, only 5% or fewer of children bearing the high-risk HLA haplotypes and about 10% of those with insulin gene polymorphism go on to clinically develop T1D during the first 20 years of their lifetime[7][8]. Therefore, what are the important factors determining whether a genetically susceptible individual develops T1D, and how could these factors be used to help in the fight against this disease?

Epigenetic modification is a key mechanism affecting gene expression, effectively determining the extent and timing of expression of a given gene in response to internal and external stimuli. Multiple lines of evidence now implicate epigenetic factors in T1D incidence: firstly, although monozygotic (MZ) twins share 100% of their DNA, they exhibit a high discordance rate in the development of T1D, especially when disease onset occurs over the age of 15[9]; furthermore, the rapid increase in T1D seen in recent years is unlikely to be a result of genetic changes across the population alone, due to the short timescale[10][11]. Alongside, other studies showed that in siblings sharing an HLA haplotype, it is rather the age at diabetes onset in their sibling that determines their risk of developing the condition, and not the shared HLA type itself[12]. Thus, it is not only the possession of high-risk genes that decide whether or not an individual progress to the clinical presentation of T1D but also whether, when, and to what extent those genes are expressed.

The growing interest in epigenetic changes in T1D and in factors driving them has led to investigations into epigenetic therapies to treat the condition.

DNA methylation involves the addition of a methyl group to the fifth carbon of CpG dinucleotides (cytosine residues linked by a phosphate to a guanine nucleotide) by DNA methyltransferases, thereby blocking gene transcription[15](Figure 1). In T1D, there is evidence that DNA methylation in both immune cells and pancreatic islet cells is important and may even substantially pre-date the diagnosis of the disease[16]. Studies of immune cells from the blood of adult MZ twins discordant for T1D have variably identified specific positions with distinct methylation patterns: one study on monocytes found that patterns of methylation at these sites were detectable many years before T1D diagnosis and were correlated with the presence of autoantibodies[17]， while a genome-wide DNA methylation analysis identified 88 CpG methylation sites in B lymphocytes with significant modifications, including some affecting genes associated with T1D pathogenesis such as HLA, insulin (INS), interleukin 2 receptor subunit beta (IL-2RB), and CD226[18]. A more recent MZ twin study did not identify any differences in DNA methylation in monocytes or B cells but found a single differentially methylated CpG position in T cells with genome-wide significance[19].

Figure 1. Gene regulation by DNA methylation. DNA is methylated by the covalent addition of a methyl group to CpG dinucleotides by DNA methyltransferases. This process is generally associated with gene silencing.

Although the significance of altered DNA methylation in T1D onset and pathogenesis is clear, there have yet to be large-scale trials of the use of DNA methyltransferase inhibitors in treating/preventing the condition. However, inhibitors of DNA methylation have been studied in vitro for their potential use in pancreatic cell reprogramming, with the future aim of regenerating patients’ beta cells as a novel T1D therapy. Lefebvre et al. found that treating pancreatic ductal cells with the DNA methylation inhibitor 5-azacytidine successfully promoted their conversion into pancreatic endocrine cells[23]. Similarly, in mice lacking DNA methyltransferase 1(DNMT1) and the alpha cell-maintaining factor Aristaless-related homeobox (Arx) specifically in pancreatic alpha cells, Chakravarthy et al. observed reprogramming of around half of alpha cells into biologically active beta cells in vivo [24]. Interestingly, these authors also found that a subset of T1D patients possess a small number of glucagon-expressing cells lacking both DNMT1 and Arx expression and instead ectopically express beta cell markers, including insulin[24]. While these results suggest that targeted DNMT1 inhibition might support the possibility of regeneration of lost beta cells in individuals with T1D, further studies addressing the longevity and functionality of these converted cells are warranted.

While not specifically assessing epigenetic modification, there are early indications that drugs as well as diets modulating DNA methylation could have some positive effect on delaying the progression to T1D. Long used in diabetes care, metformin has more recently been revealed to have multiple epigenetic modifying actions, including modulating the activity of DNA methyltransferases[25]. The REducing with MetfOrmin Vascular Adverse Lesions (REMOVAL trial) aimed to ameliorate long-term cardiovascular complications in diabetes patients using metformin[26]. In the REMOVAL trial, metformin treatment reduced the progression of atherosclerosis, weight gain, and low-density lipoprotein (LDL)–cholesterol levels[27][28], though the epigenetic effects of the treatment were not specifically measured. In type 2 diabetes, metformin treatment significantly decreased DNA methylation of metformin the transporter genes solute carrier family 22 member 1 (SLC22A1), solute carrier family 22 member 3 (SLC22A3), and solute carrier family 47 (multidrug and toxin extrusion), member 1 (MATE1) in the livers of patients; in the case of SLC22A1 and SLC22A3, reduced methylation was associated with less hyperglycemia and obesity [29]. Similarly, promising results were also seen in pre-clinical trials in adult rats with streptozotocin-induced diabetes treated with the DNMT inhibitor procainamide, which significantly reduced the activity of DNMT in the pancreas and significantly increased fasting insulin levels[30]. Thus, initial studies in both type 1 and 2 diabetes patients and models seem to indicate that DNMT inhibitors might be a promising therapeutic strategy. Several DNMT inhibitors are licensed for use in treating certain types of cancer[31] and could be worth exploring in diabetes.

Alongside direct epigenetic modification of DNA, histones undergo post-transcriptional modifications to restructure chromatin in different ways[32][33][34][35][36]. Genomic DNA is bundled into chromatin, creating nucleosomes; the histone tails project from the nucleosome and are exposed to a wide range of covalent modifications including methylation, acetylation, ubiquitination, phosphorylation, sumoylation, and ADP ribosylation[37][38]. Collectively, these post-transcriptional modifications act to regulate chromatin structure, which has profound effects on several biological activities including gene transcription, DNA repair, and chromosome condensation[32] (Figure 2). 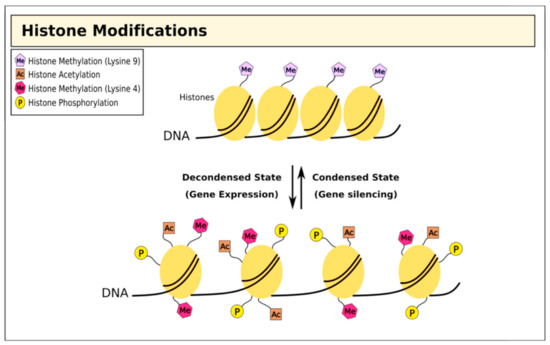 Histone modification is a significant feature of T1D[39], with studies showing aberrant histone modification as well as differential expression of the histone-modifying enzymes histone methyltransferase and histone deacetylase. A pivotal study by Miao et al. revealed increased methylation of lysine 9 in the H3 histone protein (H3K9me2) in lymphocytes from T1D patients: importantly, several of the genes affected had been linked with T1D pathology, such as CLTA4, a known T1D susceptibility gene, as well as genes affecting the signaling pathways of the immune mediators transforming growth factor-β (TGF-β), nuclear factor-ĸB (NF- ĸB), p38 mitogen-activated protein kinase (MAPKs), toll-like receptors (TLRs), and interleukin-6 (IL-6)[40]. The same group went on to show that acetylation of lysine 9 in the H3 histone protein (H3K9Ac) upstream of the major T1D susceptibility genes HLA-DRB1 and HLA-DQB1 was also significantly higher in monocytes from patients than in those from controls[41]. Furthermore, differential histone methylation and acetylation might be one mechanism explaining the T1D discordance seen in MZ twin studies. Following exposure to high glucose levels, in vitro skin fibroblasts showed significantly different expression of genes regulating epigenetic processes depending on whether they came from the affected or unaffected twin. While the expression of histone lysine methyltransferase (SET 7), H3K4 methyltransferase, and histone deacetylase (HDAC8) was lower in the cells from the type 1 diabetic twin, HDAC 4 was expressed at a higher level[42].

Histone modification inhibitors are a well-characterized class of epi-drugs with clear potential to be used therapeutically for T1D, either alone or in combination with DNA methyltransferase inhibitors. HDAC inhibitors (HDACi) were investigated by Lundh et al. after finding that pancreatic beta cells from children with newly diagnosed T1D exhibited relatively higher levels of HDAC1 and lower levels of HDACs-2 and -3 compared to controls; investigating this further in vitro, the authors showed that inhibition of HDAC1 and -3, but not HDAC2, protected primary and immortalized rat beta cells from apoptosis due to inflammatory cytokine exposure[43]. Building on this work, treating non-obese diabetic mice with the licensed lysine deacetylase inhibitors vorinostat and givinostat reversed diabetes[44], calling for future trials in human patients. Similarly encouraging data have come from trials of valproic acid, an HDAC class I and II inhibitor: in juvenile rats, valproic acid treatment positively influenced beta cell proliferation and functionality and increased insulin production, while simultaneously decreasing beta cell apoptosis and HBA1c and plasma glucose levels[45][46]. Studies in murine models also showed that the small molecule HDAC inhibitor trichostatin A[47] prevented T1D symptoms through increased acetylation of histone H3, which was associated with increased expression of the CD4+ T cell-derived lymphokine interferon gamma (INF-γ) and its transcription factor Tbet/Tbx21[48], highlighting the potential role of chromatin remodeling agents in the protection against the development of T1D.

HDACi have also been used in studies of therapeutic cell reprogramming in the hope that this might be translated into a clinical application. Similarly to DNA methylation inhibitors, in vitro inhibition of the H3K27me3 methyltransferase Ezh2 enhanced neurogenin3-mediated production of beta-like cells from human embryonic stem cells[49], as well as the formation of insulin-producing cells from human induced pluripotent cells[50]. Combining the HDACi romidepsin with the DNA methyltransferase inhibitor 5-azacytidine also led to improved differentiation of adult human dermal fibroblasts into insulin- and glucagon-producing cells[51], but again the therapeutic translation of these findings is so far lacking. Recent studies from Marino and colleagues[52] demonstrate that feeding NOD mice a combination of acetate- and butyrate-rich diets offered protection against T1D progression. These studies indicate that acetate and butyrate might be working through distinct mechanisms and that a beneficial effect may be obtained through a combination of diets rich in these short-chain fatty acids. Acetate decreased the frequency of autoreactive T cells, whilst butyrate increased the number and function of regulatory T cells. Acetate- and butyrate-yielding diets enhanced gut integrity, reduced the circulating concentration of diabetogenic cytokines (such as IL-21), and demonstrated prevention in T1D onset. Clinical trials using such diets will provide intriguing results to understand the timing and potential of such diets in individuals at high risk of T1D.