Black rhinoceros under human care are predisposed to Iron Overload Disorder that is unlike the hereditary condition seen in humans. We aim to address the black rhino caretaker community at multiple perspectives (keeper, curator, veterinarian, nutritionist, veterinary technician, and researcher) to describe approaches to Iron Overload Disorder in black rhinos and share learnings.

This report includes sections on (1) background on how iron functions in comparative species and how Iron Overload Disorder appears to work in black rhinos, (2) practical recommendations for known diagnostics, (3) a brief review of current investigations on inflammatory and other potential biomarkers, (4) nutrition knowledge and advice as prevention, and (5) an overview of treatment options including information on chelation and details on performing large volume voluntary phlebotomy. The aim is to use evidence to support the successful management of this disorder to ensure optimal animal health, welfare, and longevity for a sustainable black rhinoceros population.

Black rhinoceroses (BR; Diceros bicornis) under human care are predisposed to non-hemochromatosis Iron Overload Disorder with laboratory and histopathologic evidence of cellular injury, necrosis, and clinical signs similar to human iron overload disorders [1][2]. BR are native to eastern and central Africa and are Critically Endangered [3]. Poaching has reduced the wild population by >90% since 1970, and ~240 individuals are managed under human care with ~87 individuals in North America [4]. Over the last 30 years, BR have been documented with diseases that have either been induced by or exacerbated by IOD, prompting significant efforts in diagnostic, treatment, and prevention strategies [2][5][6].

Iron overload is an abnormal and chronic imbalance of iron metabolism with iron accumulation occurring over the course of years, saturating iron transport proteins and leading to organ damage and failure (reviewed in [7]). BR can live many years with IOD and typically do not show overt signs of illness until late in disease progression resulting in a shortened life span and reduced fecundity in this endangered species [8]. A lack of acute clinical symptoms in this species is not an honest marker of animal health nor iron balance.

IOD is a multi-factorial disease process requiring an evidence-based and integrative approach for successful prevention and treatment. The aim of this report is to highlight accumulated evidence supporting the successful management of this disorder to ensure optimal animal health, welfare, and longevity. Specifically, as representatives of the Center for the Study of Iron in Rhinos (CSI-R), the authors will provide specific practical recommendations to treat this disorder in BR. Strategies and recommendations build on the collective expertise of colleagues and empirical data from experiences in BR nutrition, clinical veterinary medicine, husbandry, and operant conditioning. This report also integrates evidence from human medicine (Figure 1), as iron overload is a common clinical problem [9], and the management of the disorder has been studied extensively; thus, we use these learnings to supplement our strategies in BR under human care.

Figure 1. Regulation of iron homeostasis in humans (adapted and simplified from Knutson and Wessling-Resnick 2003) [10]. Dietary iron is absorbed in the duodenum, part of the small intestine. After regulated passage into the body, iron is transported primarily on transferrin (TF) to the bone marrow for red blood cell production. As red blood cells are broken down by phagocytic macrophages where iron is contained in ferritin (black circles), iron is primarily recycled to the bone marrow. Excess iron is stored in the liver, mainly within ferritin protein, until needed. Hepcidin, the iron regulating peptide hormone produced by the liver, blocks entry of iron from the small intestine and release of iron from macrophages by signaling the internalization of transport protein ferroportin. Once iron has entered the body, there is no route of excretion except forms of blood loss.

Nutrition is an integral component of preventing IOD; thus, the assessment of dietary iron concentration and other nutritional factors is critical for iron balance in BR. BR likely evolved with a low-iron diet due to low iron concentrations (<215 ppm) [11] and limited availability of iron in leaves and stems of browse plants that contain high concentrations of iron-binding phenolic compounds [12][13]. The diet commonly offered to BR often has excessive iron concentrations (>300 ppm) as well as a poor representation of the nutrient and plant defense chemical compositions (e.g., polyphenols and alkaloids) found in wild browse [14]. The source of high iron concentrations in diets is pelleted feed, as dietary constituents and soil contamination can produce feeds high in iron, even when formulated to be low in iron (e.g., <200 mg/kg) [5][15][16][17][18]. It is not practical and may not be possible to provide a nutritionally complete diet under human care for BR without a pelleted energy source [19]. Furthermore, exhibit soil and vegetation can contain variable concentrations of iron, including those in excess to BR [5][20].

2.1. Could We Make the Diet More Like the Wild?

Studies on adding iron-binding compounds (e.g., polyphenols and concentrated tannins) to BR diets thus far lack compelling evidence to warrant inclusion, though no negative effects were found [21][22]. A better understanding of the biological activity of phenolic and tannin compounds is needed before routinely incorporating them. Naturally occurring iron-binding compounds such as those found in tea, grape pomace, quebracho, curcumin, etc., vary widely in composition and can bind other minerals such as zinc, copper, and calcium, further complicating nutrient balance. While supplemental iron-binding compounds and iron chelators can reduce iron absorption, the benefits should outweigh risks and must be considered with welfare and health outputs monitored. Assessing the nutrient bioavailability in vivo is invasive and obtaining total urinary and fecal iron output is challenging; these constraints hinder the development and subsequent inclusion of dietary iron-binding compounds in BR diets.

2.2. Has Diet Ever Changed the Impact of IOD?

There is evidence that a diet formulated to be low in iron can improve biomarkers of iron in BR. In particular, a reformulated pellet made by the Disney Animal Kingdom® Nutrition team with Mazuri Exotic Animal Nutrition®, with decreased iron concentration from 772 mg/kg to 222–306 mg/kg, and a reduction of the amount of pellet offered to less than 30% of the total diet in four BR impacted biomarkers [19]. These nutritional modifications resulted in a total dietary iron concentration of 135 mg/kg. Thus, the majority of the diet was forage, with about 30% as fresh browse. The overall diet, including the reformulated pellet, was high in fiber (neutral detergent fiber (NDF) = 58.9%), and thus more consistent with a wild diet. The four BR consumed the reformulated diet, including two rhinos that were markedly iron-overloaded (ferritin >4000 ng/mL and transferrin saturation at 100%) [19]. Within a month post-diet change, serum ferritin decreased in all four animals, regardless of concomitant phlebotomy [23]. The other two younger animals showed reduced IOD biomarkers. Currently, both animals show no evidence of IOD compared to age-matched conspecifics under a more traditional diet. These results highlight the significant impact that diet modification can have on iron loading in the BR (Figure 2 and Figure 3). 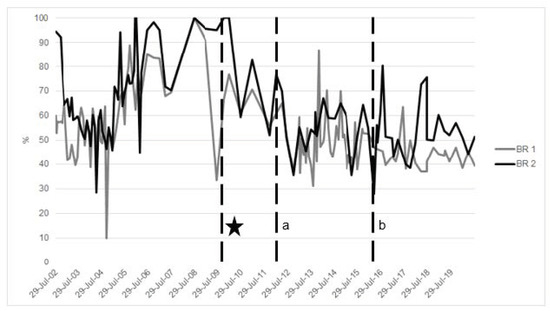 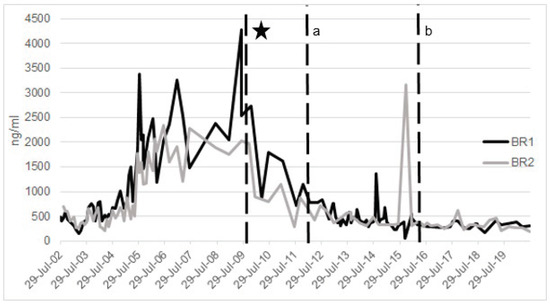 2.3. What Are the Best Practices for Feeding Black Rhinos?

An appropriate diet for BR maximizes animal welfare, lifespan, and reproductive output. Recommendations for feeding must consider not only iron but also the many interconnected nutrients and metabolic concerns which may exacerbate iron-related issues, such as obesity. Based on empirical evidence, the following specific feeding guidelines for BR are recommended [23]:

Table 1. Moisture (%), dry matter (DM;%), iron (ppm DM), and vitamin C (mg/100 g as fed; AF), calcium (%DM), and phosphorus (%DM) values in example diet items commonly used for black rhinoceros. Feed composition can be quite variable depending on harvest location, manufacturer, and season. Nutrients included in the table are not sufficient to balance an animal’s diet or to evaluate inclusion as training or enrichment food items; thus, it is recommended to consult a nutritionist. For example, although bananas are lower in iron and vitamin C than cauliflower, bananas are high in starch (~23% DM) and thus should be limited in favor of metabolic health. Another cautionary example is appreciating the high moisture in produce such as leafy greens, which dilutes nutrient concentrations in the AF product. Thus, produce items generally are not used to balance nutrient concentrations such as calcium or phosphorus.