Claudin-2 is a member of the claudin family of epithelial tight junction proteins expressed mostly in the kidneys and gastrointestinal tract. Its role as a cation-selective and water permeable paracellular channel is well studied. In addition, newly emerging strong evidence also shows that it can modulate proliferation, migration, and cell fate determination. These effects appear to be due to its interactions with cytosolic adapters, that connect it to key signaling pathways. A multitude of new data document dysregulated claudin-2 expression in many pathologies including cancer, inflammation, and fibrosis. Thus, changes in claudin-2 expression may contribute to the generation, maintenance, and/or progression of diseases through both permeability-dependent and -independent mechanisms. Based on this, efforts are underway to develop therapies targeting claudin-2 with the hope of benefiting patients with a variety of disease.

Claudin-2 is a member of the claudin family of tight junction (TJ) membrane proteins, which consists of 26 (human) or 27 (rodents) small (20-25 kDa) tetraspan proteins expressed in a tissue-specific manner in epithelial and endothelial cells [1]. They are responsible for sealing the paracellular space and generating a permeability pathway for ions and water [2][3]. Each member of the family has unique properties. The TJs contain a mosaic of claudins, and the permeability of the paracellular pathway in each epithelial layer is determined by the type of claudins expressed.  The function of claudins appear to go beyond controlling permeability. Many members of the family are increasingly found to have key effects on vital cell functions, such as proliferation, migration and differentiation [4]. These effects are likely mediated by interactions of claudins with TJ-localized cytosolic adapter proteins, that generate large signaling complexes and bind to the cytoskeleton [5]. Claudin-2 is one of the earliest described claudins. It forms paracellular cation and water permeable channels and affects cell proliferation and migration [1][6].

Expression, structure and Interactions of claudin-2

Claudin-2 is enriched in the kidney proximal tubules and in the gastrointestinal tract [7][8].  Although it is mostly an epithelial protein, there are reports that it is also present in endothelial cells and macrophages [9][10]. However, the role of claudin-2 outside of epithelium remains to be established.

Claudin-2 is a 230 amino acid tetraspan membrane protein [3]. Its calculated molecular mass is 24.5 kDa. Like other members of the family, it has two extracellular domains (ECL1 and ECL2), a small intracellular loop connecting the second and third transmembrane sections and short intracellular N- and C-terminal portions (Figure 1). ECL1 is responsible for paracellular charge selectivity and permeability [11], while the role of ECL2 remains undetermined. 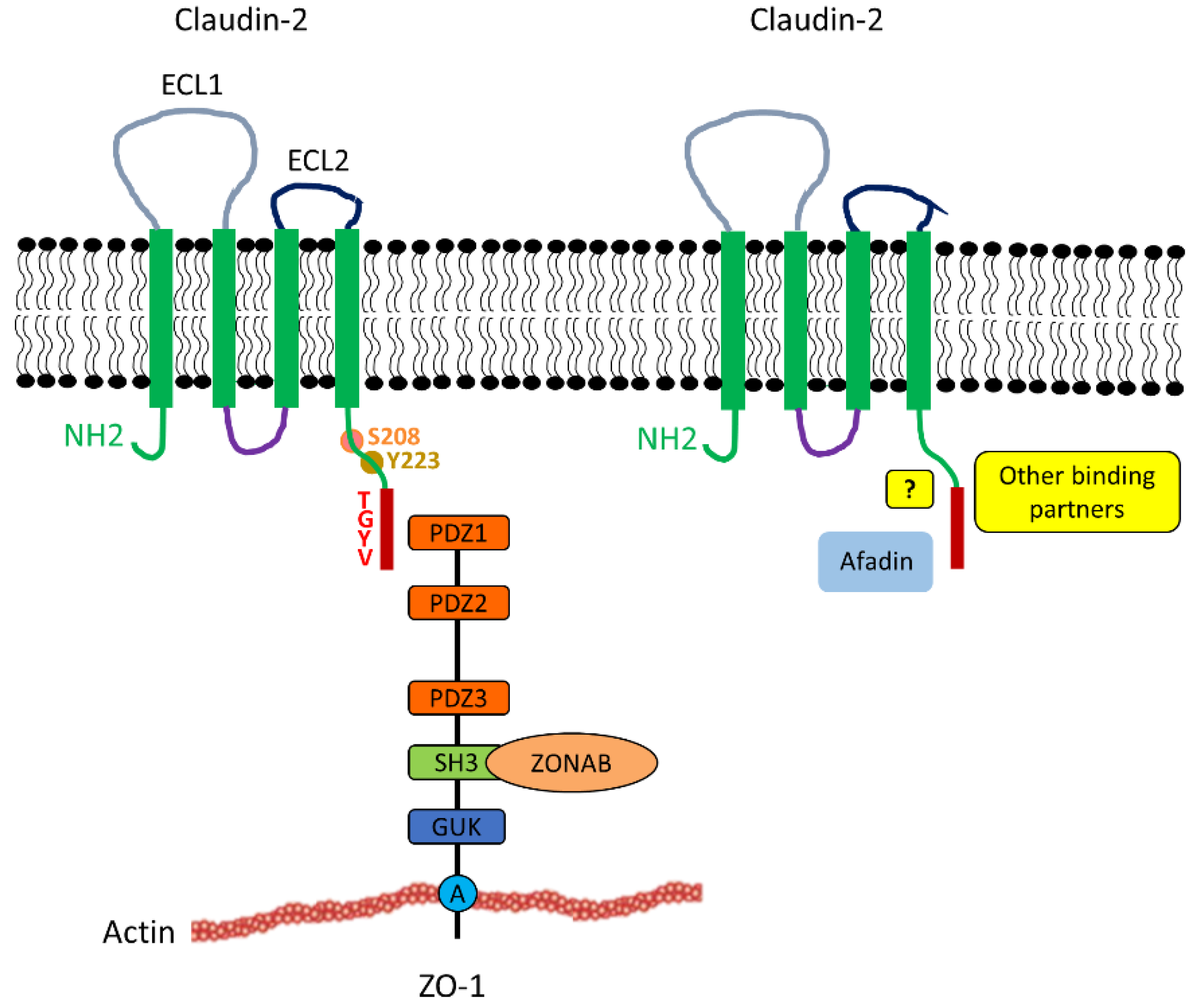 Figure 1. The structure of claudin-2 and its interactions with cytosolic multidomain adapters. Claudin-2 consists of two extracellular loops, ECL1 (grey) and ECL2 (black), 4 transmembrane domains (green box), a cytoplasmic loop (purple), a short N-terminal and a longer C-terminal cytosolic portion (green). Claudin-2 interacts with the ZO family of TJ plaque proteins (for clarity only ZO1 is depicted) through its PDZ-binding motif (TGYV) located at the end of the C-terminus (red box). ZO1 is a multidomain adapter, containing two PDZ and an SH3 domain that mediate interactions with a variety of proteins to create large multiprotein complexes. The guanylate kinase (GUK) domain likely mediates interactions with cytoskeletal components. “A” indicates the actin binding segment. The SH3 domain binds to the transcription factor ZONAB, which may play a role in the proliferative effects of claudin-2. Afadin is a recently identified claudin-2 partner. The mode of coupling (direct biding or indirect association through adapters) remains to be established. Other newly identified candidate binding partners for claudin-2 include Scrib, Arhgap21, PDLIM2/7, and Rims-2. The claudin-2 tail contains many potential phosphorylation sites. Among these, phosphorylation at Y223 affects the affinity of the PDZ binding domain, and phosphorylation at S208 appears to be a switch for membrane retention and lysosomal or nuclear localization.

Claudin-2 can be found predominantly in the TJs, but is also present in cytoplasmic vesicles [6][12], and can translocate to the nucleus[13]. It  can homodimerize with claudin-2 expressed in opposing cells, which likely promotes cell-cell adhesion. Further, claudin-2 can bind to claudin-3 and probably occludin (heterotypic interactions). The intracellular interactions of claudin-2 are starting to emerge (Figure 1). These are likely pivotal for signal-modulating effects. The last four C-terminal amino acids (T-G-Y-V, N- to C-term) correspond to a PDZ domain-binding motif, that mediate association with TJ plaque scaffold proteins including the membrane-associated guanylate kinase (MAGUK) family adapters ZO-1-3. Recently, claudin-2 was also shown to bind to the junctional adapter afadin (AF-6/MLLT4), which may have central roles in mediating effects on proliferation [14].

Claudin-2 expression is affected by a large array of inputs including hormones, growth factors [15], cytokines [12][16][17][18], physical parameters [19][20][21][22] and drugs [23][24], via a complex and context-dependent network of signaling pathways. Importantly, expression of claudin-2 is altered by many pathological conditions, including cancer and inflammatory diseases.  Regulation of claudin-2 expression happens both at the level of synthesis and turn-over .  The claudin-2 promoter has binding sites for several transcription factors, including Caudal-related homeobox (cdx) proteins, hepatocyte nuclear factor (HNF)-1, GATA 2 and -4, Activator protein 1 (AP1), Vitamin D Receptor, T-cell factor/lymphoid enhancer binding factor 1 (TCF/LEF1) and signal transducer and activator of transcription (STAT) [25][26][27][28][29]. Some of these factors act in a tissue-specific manner. Importantly, an array of signalling pathways converge on these factors, and the combined activity of all inputs determines claudin-2 levels in a highly tissue and stimulus-dependent manner. Many of the regulating pathways are altered in diseases, leading to changes in claudin-2 expression in a variety of conditions. Several of the regulating signaling pathways also affect turnover of the claudin-2. Its degradation requires endocytosis from the TJs and is likely mediated by the lysosomes [30]. Localization at the TJs in turn is affected by post-translational modifications of the C-terminal intracellular portion of claudin-2, including phosphorylation [30] (Figure 1), sumoylation[31], and nitration[32]. The specific effects of posttranslational modification on claudin-2 turn-over and interactions are not fully understood.

Claudin-2 forms paracellular cation and water permeable channels. Interestingly, water transport is mediated by the same pore that allows cation transport [33] . These permeability properties are well verified in cell lines and knockout mouse models. Claudin-2 overexpression and silencing in various cell lines decreases and increases TER, respectively (e.g.[12][34][35]). Further, knockout mouse models revealed that the selective, site-specific localization and cation channel properties of claudin-2 are essential for highly specialized functions in the kidneys and the bile duct [36]. In the kidneys, claudin-2 is fundamental for Na+ and water transport, and therefore it plays a key role in blood pressure regulation [37][38]. In the liver and bile system, claudin-2 plays a central role in water transport associated with bile generation [39].

Emerging new data suggest that claudin-2 can affect signalling pathways via its intracellular interactions [14]. Claudin-2 is bound to adapters that connect it to the junctional acto-myosin belt and the microtubules. The cytoskeleton has a bidirectional relationship with claudin-2: they are central regulators of TJ proteins including claudin-2 but acto-myosin is also modulated by claudin-2. The pathways affected by claudin-2 include MEK/ERK1/2 signalling and Rho family small GTPases [40][18]. The exact connection between these and claudin-2 remain to be defined.

Many studies implicate claudin-2 in the control of proliferation. A strong correlation was shown between proliferation/cell viability and altered claudin-2 expression. Importantly, experimentally altered claudin-2 levels impact proliferation. While the underlying mechanisms are still not fully known, several mechanisms have been brought forward. First, claudin-2 impacts cell cycle progression and expression of cell cycle regulators both in cultured cells and in a transgenic mouse model [18][41]. Second, altered claudin-2 expression affects the above-mentioned signaling pathways, and several transcription factors with proliferative effects. These include the ZO-1–associated Y-box factor (ZONAB), that shuttles between the TJs and the nucleus[13]; Sp1, a zinc finger transcription factor belonging to the Sp/KLF family [42]; and c-jun, part of the AP1 early response complex. Finally, claudin-2 was also shown to translocate to the nucleus [13].

Effects of claudin-2 on migration are also reported. In different cells claudin-2 overexpression or silencing both resulted in enhanced migration, pointing to context-dependent factors [43][42][44][45]. Like effects on proliferation, mechanism connecting claudin-2 with migration remain incompletely understood. Potential mechanisms include effects of claudin-2 on matrix metalloproteases (MMP)[42][43], a family of zinc-dependent proteases that degrade extracellular matrix proteins, thereby promoting migration. Claudin-2 was also shown to alter integrin expression[46] and to affect Rho proteins[18], that control the cytoskeleton. Finally, claudin-2 might also affect epithelial-mesenchymal transition (EMT) [18], a process that involves a coordinated genetic reprogramming, during which cells lose their epithelial characteristics and gain mesenchymal properties, including enhanced motility.

A growing number of studies document altered claudin-2 expression, phosphorylation and/or localization in various pathological conditions. In the past years, strong evidence accumulated in support of a causal link between claudin-2 dysregulation and functional alterations, the key points of which are the following. First, signalling pathways that are known to be overactivated in diseases can alter claudin-2 expression, and a good correlation exists between disease stage and claudin-2 levels. Second, loss-of-function and gain-of-function studies recapitulate some aspects of the functional changes. Studies demonstrating that primary changes in claudin-2 expression can alter cell behavior prompted a paradigm shift, favoring a pathogenic role for claudin-2. Although dysregulation of claudin-2 is likely not a primary cause, pathological changes in claudin-2 abundance and/or localization can be significant in the maintenance and/or progression of diseases.

An expanding body of literature documents dysregulated claudin-2 expression in various carcinomas, including gastric, colorectal, lung, breast and renal carcinomas and in osteosarcoma[46][47][48]. Claudin-2 is highly expressed in gastric and colorectal cancers and its expression level shows a good correlation with the development of these tumors. Initial upregulation of claudin-2 could be due to the overactivation of the above-discussed pathways, and this may promote carcinogenesis. Indeed, overexpresison of exogenous claudin-2 in colorectal cancer cell lines promoted colonocyte proliferation and anchorage-independent colony formation and stimulated tumor formation in colorectal cancer xenografts[41]. Further, claudin-2 expression was reported as a negative predictor for post-chemotherapy disease-free survival of colon cancer patients. Claudin-2 was also shown to promote self-renewal of colorectal cancer stem-like cells [49].

The importance of claudin-2 is also emerging in metastasis formation, and this might be due to effects on migration and adhesion. One prominent example was described in breast cancer cells, where claudin-2 overexpression was shown to augment metastasis to the liver[53] .

Claudin-2 levels are also altered by inflammation. Cytokines elevate claudin-2 levels in inflammatory bowel disease (IBD), a condition that inludes ulcerative colitis and Crohn’s disease [54]. Claudin-2 is thought to increased gut permeability in IBD, that is a key contributor to the disease. The role of claudin-2 in IBD however might be more complex, as recent studies suggest protective effects of claudin-2 against tissue injury. A transgenic mouse with targeted overexpression of claudin-2 in the colon had reduced colitis-associated injury [41]. This could be due to reduced apoptosis and augmented regeneration resulting from faster proliferation. While this is a beneficial effect, this is a double-edged sword, as augmented proliferation might also promote carcinogenesis. Thus, elevated claudin-2 expression might be a crucial connection between inflammation and cancer, which could protect against injury and enhance regeneration, but also raises the risk of cancer[55].

In the kidney, claudin-2 is necessary for energy efficient tubular Na+ transport [56]. Accordingly, its loss increases susceptibility to hypoxia-induced injury. Of note, claudin-2 expression in the kidney tubules was shown to be reduced by a large variety of potentially harmful stimuli, and in various kidney disease animal models (e.g. [20][57][12][58][8][59][21]. Thus, pathological loss of claudin-2 might promote injury and augment the progression of kidney disease. The exact connection, however, remains to be established.

Taken together, altered claudin-2 expression is emerging as a possible pathogenic factor in a a number of conditions. Indeed, several studies have now demonstrated that targetting claudin-2 might have beneficial effects in cancer[60][61][52]. Future work will have to address the details of the mechanisms that connect claudin-2 with signalling pathways and various outcomes. The design and testing of new therapeutic interventions to interfere with this protein is also an important next step.

Antidiabetic Properties of Curcumin I

The anticancer properties of Oligonucleotides