Thyroid nodules (TNs) are defined by the American Thyroid Association (ATA) as “discrete lesions within the thyroid gland, radiologically distinct from surrounding thyroid parenchyma” [1]. They are extremely common and frequently identified in patients, with no symptoms, by self-examination or in undergoing evaluation for other medical conditions [2]. TNs may be discovered by palpation during a general physical examination or by radiographic exams, such as carotid duplex ultrasound (US), magnetic resonance imaging (MRI), computed tomography (CT) scans, or 18-fluorodeoxyglucose uptake on positron emission tomography scan (18FDG-PET) scanning. When detected in the latter exams, TNs do not correspond to palpable lesions and are therefore called as “thyroid incidentalomas” [3].

The method of identification determines the prevalence of TNs in the general population. When addressing palpation only, the prevalence ranges from 4 to 7% [4][5], whereas US detects nodules in 20–76% of the adult population [5][6], especially with the current use of high-resolution US techniques [2]. The incidence of malignancy detected in TNs is relatively low, ranging from 1.6 to 12% [7][8]. US is the primary tool for the diagnosis and the initial cancer risk stratification of TNs. Indeed, it guides decision making for fine-needle aspiration (FNA) biopsy, the subsequent clinical assessments at the time of long-term follow-up [9], and the eligibility for active surveillance of suspicious nodules [10]. US features evaluated in each nodule include echogenicity, composition (solid, cystic, mixed), margins, calcifications or other hyperechoic foci, shape, and relations with the thyroid capsule [11][12]. US patterns associated with malignancy comprehend hypoechogenicity; infiltrative, irregular, or lobulated margins; microcalcifications; taller-than-wide shape; and absence of a halo [13].

3. Types of Calcification in Thyroid

Pathological calcifications can include dystrophic calcification, i.e., deposition of calcium at sites of cell injury and necrosis, and metastatic calcification, which refers to deposition of calcium in normal tissues caused by hypercalcemia (usually a consequence of parathyroid hormone excess); the latter will not be address in this review. The simplest way that thyroid nodular calcifications can be classified is according to their diameter and location. Under US, microcalcifications appear as hyperechoic (i.e., increased echogenicity relative to thyroid tissue) spots ≤ 1 mm in diameter with or without posterior acoustic shadows or as simple fine acoustic shadows [20]. They can be named as stromal calcification, bone formation, or psammoma bodies (PBs). Another type of small echogenic focus seen in the thyroid is inspissated colloid, which may cause a comet tail reverberation artifact in US [21][22].

The main types of calcifications are summarized in Table 1 and Figure 1. A more detailed description will be made for PBs, since they are more closely related with neoplastic transformation.

A common finding in thyroid are the calcifications known as PBs, sometimes designated as calcospherites. Most PBs are 50–70 μm round-shaped calcified concretions (Figure 1C). These structures present a glassy appearance, are concentrically laminated, and stain dark blue to black in Giemsa and purple in hematoxylin and eosin (HE) staining (Figure 2).

Figure 2. Psammoma bodies (PBs) in a papillary thyroid carcinoma: (A) visible PBs with purple color in hematoxylin and eosin (HE) staining, 10×; (B) magnified inset with PBs marked with the black arrows, 40×.

The main problem in histopathology, although not frequent, is to distinguish PBs from stromal calcification. PBs can usually be distinguished from granular calcium deposits associated with degeneration and from condensed colloid on the basis of typical concentric lamination, while the lack of birefringence distinguishes them from oxalate crystals often present in benign thyroid lesions [28]. The mechanism of PB formation in thyroid tumors remains controversial. Johannessen and Sobrinho-Simões [27] reported that they probably represent the end stage of two biologic events: (i) thickening of the basal lamina of the vascular stalk of the neoplastic papillae, followed by vascular thrombosis, calcification, and (possibly endothelial) cell necrosis, and (ii) intralymphatic necrosis and calcification of tumor thrombi in the thyroid adjacent to the main tumor or in the opposite thyroid lobe; these authors stressed that PB is an umbrella term covering several different entities that share light microscopic features that can be separated on electron microscopy. Johannessen and Sobrinho-Simões concluded that true "psammoma bodies" are formed by calcification of intravascular tumor thrombi or of infarcted tips of malignant papillae [27]. Cotran et al. [30] pointed that in the process of dystrophic calcification, single necrotic cells constitute seed crystals that become incrusted with the mineral deposits and the progressive acquisition of outer layers may create its lamellated configurations, giving rise to PBs. According to Majno et al. [31], dystrophic calcification has two major phases—initiation (nucleation) and propagation—which can occur intracellularly or extracellularly, whereas initiation of intracellular calcification occurs in the mitochondria of dead or dying cells. The initiators of extracellular calcification include phospholipids found in the membrane-bound vesicles, which are about 200 nm in diameter. Other authors [32] analyzed components of PBs in meningiomas and considered capillaries and degenerative cells as initiators of the formation of such calcareous bodies. Another possible mechanism refers to a humoral immune reaction—Tabuchi et al. [33] identified through immunohistochemistry the presence of immunoglobulin G (IgG)s in blood vessel whorls and in PBs in meningiomas, but there are no further studies corroborating these data. Several studies also reveal that the derivation and localization of PBs (within papillary cores, tumor stroma, or lymphatic vessels) is crucial in terms of context (site, morphology, and several important components for their definition) [27][34].

Besides thyroid, where PBs are found mainly in papillary thyroid carcinomas (PTCs) [24][35], meningiomas (45%) [36] and serous cystadenocarcinomas of ovary [37] also present PBs. PBs were reported rarely in other neoplasms, such as in insulinomas [38], lactotrope adenoma of the pituitary [39], serous papillary adenoma of borderline malignancy of the broad ligament, uterine serous carcinoma [40], endocervical adenocarcinoma [41], cholangiocellular carcinoma [42], chromophobe renal cell carcinoma [43], and in psammomacarcinoma of the peritoneum [44].

Macrocalcifications may result from two pathologic processes. On one hand, degeneration of follicular cell lesions that leads to cystic formation due to infarction, hemorrhage, subsequent fibrosis, and occasionally calcification, with the latter being the final stage of scarring from a histopathological standpoint [50]. Macrocalcifications may be irregular in shape, and have been classified in different types according to the observations of the authors [16][26][51]. The two most commonly found classifications for macrocalcifications are described below and in Table 1.

This type of calcification in the TNs is commonly associated with benign nodules when it is complete. In contrast, uneven thickness or discontinuity of the calcification, it is suspicious for thyroid malignancy [52][53]. Focal interruption of an eggshell calcification can be explained by tumor infiltration through the broken calcification rim. Indeed, the presence of tissue outside the calcification should suggest malignancy and lead to a US-guided FNA [16].

Coarse macrocalcifications can also be referred to as dystrophic calcification and can be found in benign and malignant conditions of the thyroid including colloid goiters and anaplastic carcinomas (Figure 1D). On color or power Doppler US, a spoke-wheel vascular pattern centered on a coarse calcification is a strong argument in favor of benign follicular hyperplasia or thyroid adenoma [26]. Although a peripheral distribution can be seen in malignancy, the study results are conflicting and it is controversial if peripheral/rim coarse calcification has an increased malignancy risk [51].

The lack of a standard terminology and of a subclassification of the calcifications regarding morphologic features contributes to the absence of consensus for the importance of sonographically detectable calcifications. Several US categorization systems for echogenic foci in TN were developed, with some studies showing that echogenic foci previously termed as “microcalcifications” were present in benign nodules besides malignant TNs [21][22]. Tahvildari et al. [54] stressed that many authors referred to as “microcalcifications” that which do not exclusively represent PBs but rather other entities, including stromal calcifications and sticky or inspissated colloid. On the basis of the aforementioned data, the American College of Radiology Thyroid Imaging, Reporting and Data System (ACR TIRADS) proposed a terminology to describe echogenic foci in TN and has removed the word “microcalcification” from its lexicon and replaced it with more precise descriptors [17].

PBs within the thyroid gland are typically associated with classical PTCs, being found in up to 65% of cases [28][55][56][57]. In PTCs, microcalcifications representing true PBs are developed within the cores of papillae and/or in the tumor stroma and/or inside lymphatic vessels but often do not present calcification of neoplastic follicular colloid substance [68]. This explains why the follicular variant of PTC (FVPTC) has a very low frequency of microcalcifications (PBs) [58]. When FVPTC is infiltrative, the frequency of calcification can be higher but is rare in the encapsulated FVPTC [56][57]. Diffuse sclerosing variant of papillary thyroid carcinoma (DSVPTC) is an uncommon variant of PTC, characterized by diffuse involvement of one or both lobes of the thyroid gland [59]. This subtype also presents numerous PBs, so much that Koshikawa et al. [60] included “abundant psammoma bodies” in the list of cytological findings for DSVPTC. In MTC, calcification is a very common US finding and the reported incidences can vary from 20 to 54% [61][62]. 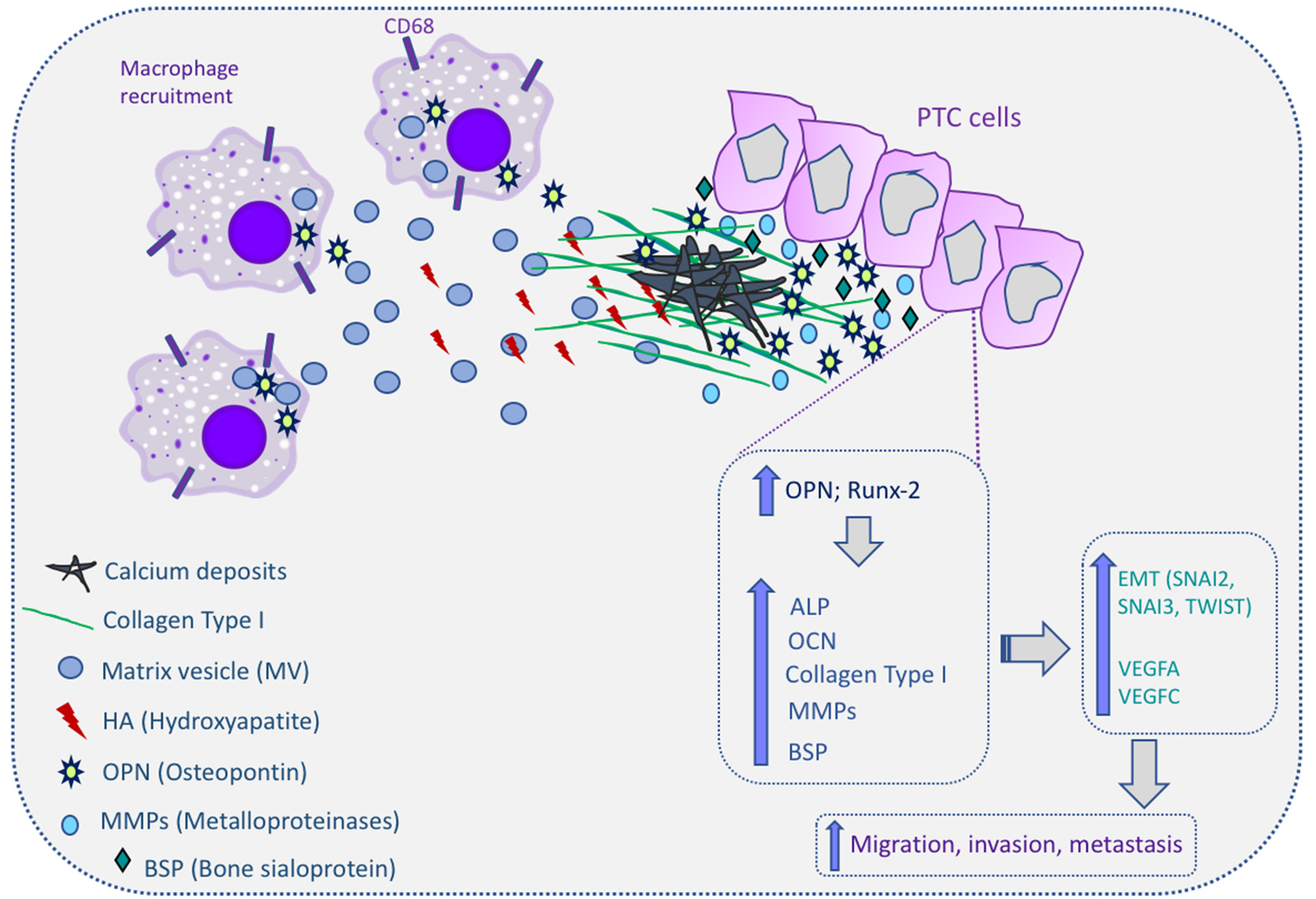 Figure 3. Molecular mechanism of calcification in papillary thyroid cancer (PTC) cells. Macrophages can be recruited to the PTC microenvironment and release matrix vesicles (MVs) to the extracellular matrix (ECM). MVs contain hydroxyapatite (HA), which initiates the calcification process. Osteopontin (OPN) and runt-related transcription factor-2 (Runx-2) are overexpressed in PTC cells and this increases the expression of alkaline phosphatase (ALP), osteocalcin (OCN), collagen type I, metalloproteinases (MMPs), and bone sialoprotein (BSP). All these molecules are involved in the induction of calcium deposits in the ECM, culminating in the calcification process in thyroid tissues, and also induce the expression of epithelial–mesenchymal transition genes (snail family transcriptional repressor (SNAI)2, SNAI3, and twist-related protein 1 (TWIST1)) and angiogenic factors (vascular endothelial growth factor (VEGF)A and VEGFC). Up arrows mean increase; The cells expressing CD68 correspond to macrophages.