Subjects: Others
View times: 258
Submitted by:

Immune checkpoint inhibitors represent a promising treatment choice in many kind of tumours, including hepatocellular carcinoma (HCC). In this review, we provide an overview of the role of these new agents in the management of HCC according to the Barcelona staging system, alongside with a critical evaluation of the current status and future directions. Several clinical trials are focusing on the use of immunotherapy in HCC, alone or in combinations with antiangiogenetic agents as well as local treatment. However, the majority of those trials are still ongoing and, until now, only a few combinations were approved in the clinical practice from the regulatory authorities. Additionally, decisions about the choice of the right sequence of treatments in HCC patients in the light of the “continuum of care” principles, is still hard. In fact, it requires careful consideration in a multidisciplinary context in order to ensure a tailored treatment for each patient.

Immune checkpoint inhibitors (ICIs), a therapeutic class of monoclonal antibodies that blocks the immune checkpoints. These are co-inhibitory molecules physiologically expressed in different cells types, such as natural killer cells, dendritic cells, tumor-associated macrophages, monocytes and myeloid-derived suppressor cells (MDSCs)—including B and T cells, and that mantains self-tolerance[1][2]. ICIs act by applying a break that prevent the activation of these cells, limiting tissue damage. The balance between co-stimulatory signals and immune checkpoints leads to T cells activation, defining the intensity of the immune response.

ICIs have become a mainstay in the treatment of many cancers and then numerous clinical trials have been conducted and others are still ongoing with the aim to evaluate the safety and efficacy of these agents in several solid and hematological malignancies[3]. The main immune checkpoint receptors are CTLA-4, PD-1, TIM-3, BTLA, VISTA, LAG-3 and OX-40[4].

The success of cancer immunotherapies through PD-1 and CTLA-4 mediated immunosuppression led to the developement of many clinical trials also in HCC. In this field, two classes of ICIs are currently being tested as mono or combination therapies: CTLA-4 (tremelimumab and ipilimumab) and PD-1/PD-L1 inhibitors (anti-PD-1: nivolumab, pembrolizumab, tislelizumab, camrelizumab and sintilimab; anti PD-L1: atezolizumab and durvalumab).

2. The Checkpoint Pathways Regulated by CTLA-4 and by PD-1 Receptors

CTLA-4 is expressed on activated T cells, Tregs, and at low levels, on naïve T cells[5][6]. Its main function is to downregulate the activation of T lymphocytes by blocking the co-stimulatory signal of CD28.

PD-1 plays a key role in the regulation and in the maintenance of the balance between T cells activation and immune tolerance. Unlike CTLA-4, PD-1 is widely expressed, it can be detected not only on the T cell surface, especially CD8+ T cells, but also on Tregs and MDSC[7]. Additionally, whereas CTLA-4 mainly regulates the activation of T cells in lymphatic tissues, the most important action of PD-1 is to reduce the activity of T cells in peripheral tissues during the immune cell mediated or inflammatory response. Then, T cell function is influenced by the level of PD-1 activity and, when PD-1 binds to its ligands PD-L1 or PD-L2, T cell proliferation and cytokine release are inhibited.

Today, it is well-know that chronic exposure to antigens leads to the hyperexpression of PD-1 in T cells[8]. Additionally, cancer cells can turn PD-L1/PD-1 signaling to their own advantage through the expression of PD-L1 or PD-L2. This can activate PD-1 in TILs, resulting in the escaper of immune surveillance[9][10]. The hyperexpression of PD-1 reported on CD8+ T-cells in patients with HCC and the increase in PD-1+CD8+ TILs confirmed the previous theory. Additionally, the presence of those cells in HCC specimens was associated with higher rate of progression of disease after curative hepatic resection[11][12].

3. Immunotherapies in HCC: The Biological Rationale of Their Use

Immunotherapy in HCC is particularly attractive for several reasons. The liver is an immunological organ that works as a biological filter against infections, which could came from the blood flow or gastrointestinal tract in which there might be a release of proteins and pro-inflammatory cytokines[13][14]. In fact, the liver is constantly exposed to many kind of antigens from food and microbiota, which can stimulate immune cells from innate and adaptive immune system. Several trials have demonstrated that the liver has developed an immune tolerability during its evolution process, due to the permanent exposure to those antigens[15][16]. This fact is supported by the evidence of the low rates of allograft rejection into the liver if compared to other organ transplants[17][18]. In addition, HCC is considered an inflammation-related cancer with a potential immunogenicity. In fact, it is know that the majority of HCC arises in liver affected by cirrhosis and hepatitis, which are considered typical inflammatory conditions[19]. Therefore, this inflammatory environment could act as “pro-neoplastic” factor, since it is involved in cancer progression through different mechanisms, such as the DNA damage and genomic aberrations.

However, even if the liver has an “immunosuppressive” basal condition, several trials showed that an immune response to tumour is possible also in HCC. In particular, in patients who developed HCC after drug-induced immunosuppression, the discontinuation of immunosuppressive treatment lead to a spontaneous tumor regression by the reactivation of cytotoxic T-cells, that are able to identify and eliminate the cancer cells[20][21]; there is an increase in programmed death 1 (PD-1) and its ligand (PD-L1) expression as well as tumour infiltrating lymphocytes (TILs) in patients with HCC[11][12], leading to the immunosuppression[22][23]. Additionally, high Cytotoxic T-Lymphocyte Antigen 4 (CTLA-4) expression on regulatory T-cells (Tregs) in peripheral blood has been recorded in HCC patients in association with a decrease in immunosuppressive cytolitic granzyme B production by CD8+ T-cells. Regarding CD4+ T-cells, CTLA-4 is essential for their activation during the priming phase of the immune response. In fact, in the physiological process, T-cell are activated after the antigen presentation, whereas CTLA-4 reduces this activity, leading to T-cell suppression by blocking the binding between CD28 and CD80- CD86. Additionally, it plays an important role in the function of Tregs; in fact, CTLA-4 expression on CD14+ dendritic cells inhibits T-cell proliferation, inducing at the same time, the apoptosis of these cells by increasing the production of IL-10 and indoleamine-2,3-dioxygenase (IDO). Based on this background, there is a strong rationale to test ICIs in HCC[24] (Figure 1). 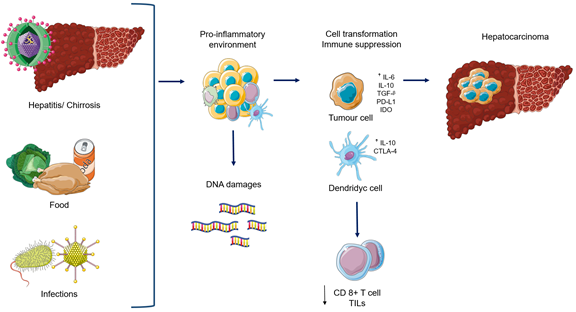 Anonymous
13 Jun 01:29:02
0
An interesting entry on immune checkpoint inhibitors representing a promising treatment in many kind of tumours
View more