Microneedles (MNs) represent micron-sized structures, consisting of a variety of materials, that have been recently emerged as physical enhances for a painless and safe transdermal delivery of drugs through the skin.

The concept of miniature needles for drug delivery came about in the 1960s, and it was patented by Alza Corporation in 1971. That device contained tiny protrusions (MNs) and a drug reservoir for API delivery by diffusion or pressure. This MNs concept was experimentally tested almost 30 years later, with the extensive development of microfabrication manufacturing technology. From the first published scientific paper on drug delivery via MNs[1], the interest in MNs has grown in scientific circles, along with the number of clinical trials and approved products based on this principle[2].

Briefly, MNs represent solid or hollow tubes with a length of 50–900 μm, less than 300 μm in diameter, of various shapes, sizes, and densities per unit area of supporting or adhesive membrane surface[3][4]. Arrays of a maximum of 20,000 MNs per cm2 on the base plate create a physical path of micron dimensions through the upper layers of the epidermis, without reaching the nerve endings (nociceptors) in the dermis. 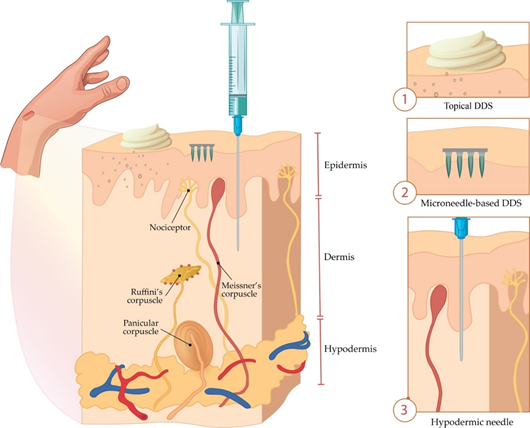 There are several ways to classify MNs. Some authors divide them into solid and hollow MNs and include coated, uncoated, and dissolving MNs in the category of solid ones[5]. Others divide them according to the production method into “in-plane MNs” (microneedle shafts oriented parallel to the base substrate) and “out-of-plane MNs” (microneedle shafts bent at 90° to the base substrate)[6]. The most common categorisation is into four (five) types (Figure 2)[7]:

Figure 2. A schematic representation of drug release methods with five different types of MNs. (A) Hollow MNs pierce the skin (left) and provide the release of liquid drug formulation through the needle lumen (right). (B) Solid MNs pretreat the skin to create transient microchannels skin (left) and increase the permeability of the drug that is then, applied in the form of a transdermal patch, solution, cream, or gel (right). (C) Coated MNs with drug formulation (left) enable the fast dissolution of the coated drug in the skin (right). (D) Dissolving MNs are prepared from polymer and embedded drug in the MN matrix (left) to provide the bolus or controlled delivery of a drug (right). (E) Hydrogel MNs poke the skin, uptake interstitial fluids (right), and induce diffusion of the drug from the patch through the swollen MNs (left).

In contrast to solid MNs, hollow MNs possess a lumen or internal bore (5–70 μm wide), and thus enable the transportation of the drug[8] by passive diffusion or by applying pressure using a syringe, pump, or gas[9][10][11][12]. Liquid formulation flows (typically, 10–100 μL/min) from the reservoir through hollow MNs and continuously release its content in certain layers of the skin (poke and flow) (Figure 2A)[13][8][14][15]. Commonly, they are used to deliver insulin[16][17] and vaccines[18].

In comparison to other MN types, hollow ones deliver higher API amounts. The ease of their manufacturing, low costs, and accurate drug release control from the liquid preparation are the advantages of this MN type[19]. Furthermore, controlled API release can be achieved by the incorporation of a microfluidic chip[20][21] or micropump[22] into an array of MNs[6][23]. The integration of the drug reservoir with a heater delivers the drug solution to the skin by spreading the liquid or creating bubbles. By pressing the flexible reservoir, the drug solution is released into the skin[5][19][23]. Although this therapeutic strategy requires the liquid drug formulation, no reformulation is necessary. However, a challenge is to deliver a dry formulation, generally used to improve drug stability and convenience of patch-based application, without reconstitution[2]. The main limitations are the possibility of clogging the needle tip in the tissue and the resistance to flow due to the density of compressed skin tissue around the MN tip. Therefore, to overcome this disadvantage, a side opening with off-centred holes is designed[8]. Another way is the gradual insertion of the needle[24].

Solid MNs can be applied both with or without drug coating, in the poke and patch approach. In the first case, MNs are initially applied to the skin to create transient aqueous microchannels in the SC. After the removal of MN array, the conventional drug formulation in the form of transdermal patch, solution, cream, or gel is applied to that region (Figure 2B)[14][15]. Therefore, API from the external reservoir permeates through these microchannels by passive diffusion[24].

In the second case, solid MNs are not only used for piercing the skin but also serve as drug reservoirs when MNs are coated with the suitable drug formulation. Although this approach allows for the rapid delivery of the therapeutic API dose, a limited drug amount can be applied on the base and shaft of the MN (usually less than 1 mg)[25]. Furthermore, the integration of these MNs, as a part of a closed-loop system of a smart patch allows for the controlled drug delivery based on feedback from the analysis of body fluids[26][27]. With these systems, the incorporation of lab-on-a-chip technology will enable the detection of broadly employed biomarkers not only in hospitals but in clinical laboratories as well[27].

Coated MNs are manufactured by coating solid MNs with a drug formulation before application on the skin (Figure 2C). Once the coated arrays of MNs are inserted into the skin, the drug formulation is continuously dissolved and then released into the skin (coat and poke approach). Coated MNs rapidly deliver macromolecules such as vaccines [28][29][30][31], proteins[32], peptides[33][34][35], and deoxyribonucleic acid (DNA)[36]. Although this type of MN enables a simple one-step application process, the main drawback is the limited amount of drug that can be coated on the surface of the MNs. The use of coated MNs is, therefore, limited to potent molecules or drugs[24].

Besides APIs, dissolving MNs consist of soluble matrix containing biocompatible polymers or sugars. MN tips dissolve after contact with the interstitial fluid, followed by API release (poke and release approach) (Figure 2D). As the release kinetics of the active substance depend on the degree of dissolution of the constituent polymers, it is possible to control drug delivery by adjusting the polymer composition or by modifying the manufacturing process[24]. Ling and Chen presented a dissolving MN patch consisting of starch, gelatin and insulin as a drug model. An in vitro test showed that these MNs released almost all of the insulin content within 5 minutes. Furthermore, they were mechanically strong enough, allowing bioactive molecules to be stably encapsulated[37].

Nowadays, there is growing interest in dissolving MNs made of biodegradable materials, as they enable API delivery without creating sharp, bio-contaminated, and non-degradable waste[2]. Moreover, in the case of the production of MNs from semi-synthetic and synthetic polymers and sugars, the manufacturing costs are significantly lower[38]. However, the main disadvantage is the deposition of polymers in the skin, which is undesirable for long-term use[24]. Degradable MNs, a subcategory of dissolving MNs, may deliver a wide range of hydrophilic agents, including caffeine, lidocaine, metronidazole, ibuprofen, as well as several biopharmaceutical molecules (low molecular weight heparin, insulin, leuprolide acetate, erythropoietin, and human growth hormone)[39].

A relatively new type of MNs is fabricated from a hydrogel-forming matrix and was first described in 2010 [40]. This new strategy includes integrated systems consisting of cross-linked polymer micro protruding from a solid patch-like base containing the API. Upon administration, needles rapidly uptake interstitial fluid from the tissue, inducing the diffusion of the drug from the patch through swollen MNs (Figure 2E). These systems are manufactured from aqueous mixtures of specific polymeric materials, i.e., polymethylvinylether-co-maleic acid (PMVE/MA)[24]. Lee et al. made hydrogel MNs from ultra-low viscosity carboxymethylcellulose (CMC) and amylopectin. After the incorporation of sulforhodamine, bovine serum albumin, or lysozyme, MNs were dissolved safely in the skin, therefore allowing bolus or sustained release delivery[41]. Garland et al. showed that drug delivery could be adjusted by modulating the density of the hydrogel matrix. Importantly, after the removal of the hydrogel MNs, the skin was intact, leaving no polymer residues. Hydrogel MNs have softened enough to prevent re-application, thus reducing the risk of transmitting infections[42].

Phase transition MNs are a subcategory of hydrogel MNs. After the absorption of the body fluid, the API from the MN matrix is released due to swelling of the polymer. This MN type leaves some or no residue after application[7]. Although dissolving or degradable MNs could carry higher concentrations of the drug, the matrix makes up a large portion of the needles, which dissolve or degrade in the skin, making them unsuitable for everyday use. Retaining the matrix in the skin may cause low compliance in patients and potential side effects if the drugs are administered daily or at short intervals. The most suitable active ingredients, in this case, are vaccines because they are used only once (or a few times), so the amount of matrix deposited in the skin will be more acceptable. Therefore, the most promising type of MN is one made of hydrogel that does not dissolve nor degrade in the skin but has a controlled or continuous release of active substances[7].