Epigenetic dysregulation is an important feature for cancer initiation and progression. Long non-coding RNAs (lncRNAs) are transcripts that stably present as RNA forms with no translated protein and have lengths larger than 200 nucleotides. LncRNA can epigenetically regulate either oncogenes or tumor suppressor genes. Nowadays, the combined research of lncRNA plus protein analysis is gaining more attention. LncRNA controls gene expression directly by binding to transcription factors of target genes and indirectly by complexing with other proteins to bind to target proteins and cause protein degradation, reduced protein stability, or interference with the binding of other proteins. Various studies have indicated that lncRNA contributes to cancer development by modulating genes epigenetically and studies have been done to determine which proteins are combined with lncRNA and contribute to cancer development. In this review, we look in depth at the epigenetic regulatory function of lncRNAs that are capable of complexing with other proteins in cancer development.

Among these non-coding transcripts, long non-coding RNAs (lncRNAs) have a length of 200 bp or more and are epigenetically involved with cancer development in various cells and tissues[1]. LncRNA can play a key role or act as a mediator in epigenetically controlled mechanisms of diverse cancer progression[2]. LncRNAs can regulate oncogenic or tumor suppressive gene expression by directly binding to the target gene or recruiting other transcriptional regulators to induce chromatin modification or DNA methylation in the nucleus[3][4] and by indirectly scaffolding or complexing with miRNA, mRNA, or proteins to control biological functions of the target protein in the cytoplasm[5][6].

Recently, various studies and reviews have focused on the regulatory functions of lncRNA by searching for interactions with miRNAs that regulate target gene expression via binding to its Three prime untranslated region (3′UTR)[7]. However, many lncRNAs can regulate cancer-associated signaling pathways by directly binding to proteins that are related to cancer mechanisms[8]. It has been well-documented that lncRNAs interact with other proteins, including transcription factors (TFs)[9], DNA methyltransferases (DNMTs)[10], polycomb repressive complex 2 (PRC2)[11], RNA binding protein (RBP)[12], and heterogeneous nuclear ribonucleoprotein (hnRNP)[13], to regulate the target’s function in the mechanisms of cancer progression[14]. There have been certain major findings in the mechanisms by which lncRNA cooperates with other proteins: (1) lncRNA interacts with TFs to transcriptionally regulate target gene expression in cancer[9], (2) lncRNA binds to DNMTs such as, DNMT1, DNMT3A, and DNMT3B, causing the alteration of gene methylation[10], (3) lncRNA can remodel chromatin states by forming a complex with PRC2 that is comprised of embryonic ectoderm development (EED), suz12 polycomb repressive complex 2 subunit (Suz12), and methyltransferase enhancer of zeste homolog 2 (EZH2) (Figure 1)[11]. Following these findings, the complexes of various lncRNAs with many different types of proteins have been reported in various types of cancer as well as in different cancer-related processes [15]. 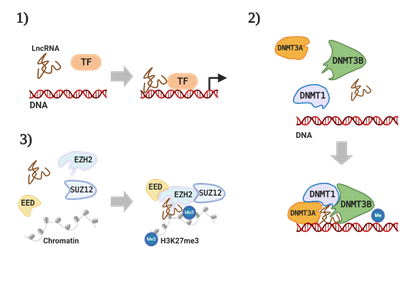