Two antiviral classes, the neuraminidase inhibitors (NAIs) and polymerase inhibitors (baloxavir marboxil and favipiravir) can be used to prevent and treat influenza infections during seasonal epidemics and pandemics. However, prolonged treatment may lead to the emergence of drug resistance. Therapeutic combinations constitute an alternative to prevent resistance and reduce antiviral doses. Therefore, we evaluated in vitro combinations of baloxavir acid (BXA) and other approved drugs against influenza A(H1N1)pdm09 and A(H3N2) subtypes. The determination of an effective concentration inhibiting virus cytopathic effects by 50% (EC50) for each drug and combination indexes (CIs) were based on cell viability. CompuSyn software was used to determine synergism, additivity or antagonism between drugs. Combinations of BXA and NAIs or favipiravir had synergistic effects on cell viability against the two influenza A subtypes. Those effects were confirmed using a physiological and predictive ex vivo reconstructed human airway epithelium model. On the other hand, the combination of BXA and ribavirin showed mixed results. Overall, BXA stands as a good candidate for combination with several existing drugs, notably oseltamivir and favipiravir, to improve in vitro antiviral activity. These results should be considered for further animal and clinical evaluations.

Since 1977, two subtypes of influenza A viruses, H1N1 and H3N2, along with influenza B viruses, have co-circulated in the human population. These viruses are responsible for seasonal epidemics and may cause global pandemics [1]. Influenza epidemics can lead to millions of cases of severe respiratory illnesses and to half a million deaths annually worldwide [2] representing a major public health challenge. Vaccination still remains the first line of prevention against seasonal influenza infections [3][4][5] but the protection conferred by actual vaccines varies from year to year due to the evolution of the circulating strain and the vaccine match [6][7]. Antivirals are recommended for the treatment of seasonal influenza viruses, especially in high risk populations (elderly, immunocompromised patients and subjects with co-morbidities) [8]. Neuraminidase inhibitors (NAIs), such as oseltamivir, zanamivir, peramivir and lanamivir, constitute the main recommended drugs for the treatment of influenza viruses in many countries [9][10][11]. These drugs inhibit the neuraminidase (a glycoprotein that enables the virus to be released from host cell) which reduces clinical illness [9][12]. In addition to this major class of antivirals, RNA-dependent RNA polymerase (RdRp) inhibitors are also approved in a few countries to treat influenza A and B viruses. Favipiravir (also known as T-705) is a purine nucleoside analog that is recognized as an alternative substrate by the viral polymerase and is incorporated into the nascent RNA, leading to RNA viral replication errors [13][14]. Recently, baloxavir marboxil (BXM; prodrug of baloxavir acid, BXA), a cap-dependent endonuclease inhibitor, has been licensed in a few countries including USA. This compound targets the endonuclease activity of the polymerase acidic (PA) subunit, resulting in the inhibition of RNA transcription and replication [14]. Not surprisingly, prolonged antiviral therapy may lead to the emergence of drug resistance. Indeed, H275Y, E119G, I427T or I223R (N1 numbering) substitutions, among others in the neuraminidase (NA) protein, induce single or multi-drug resistance [15][16][17]. Rapidly after licensure, the I38T PA substitution was shown to reduce sensitivity to BXM [18][19][20][21]. On the other hand, the K229R substitution in motif F of the PB1 subunit confers in vitro resistance to favipiravir [22]. Several in vitro and in vivo studies have shown that dual antiviral therapies may have a significant positive effect on the treatment of influenza infections [13][23][24][25] and could further delay the emergence of resistance. Indeed, combination therapy with BXM and oseltamivir was reported to produce synergistic responses against the influenza A/PR/8/34 strain and to reduce virus titers [26]. However, there is a lack of information about combination therapy between this new polymerase inhibitor and other approved drugs. Moreover, the impact of combining two polymerase inhibitors is still unknown.

2. Antiviral Activity of Single Drugs against Two Influenza A Strains.

3. In Vitro Two-Drug Combination Activity against Two Influenza A Strains.

Combination drug experiments against the A(H1N1) strain (Table 2A) showed that BXA exhibits synergistic effect when combined with each NAI. The combination index weights (CIwt) were 0.40, 0.48 and 0.48 for zanamivir, oseltamivir and peramivir, respectively. Additionally, BXA and favipiravir had synergistic effects against influenza A(H1N1) with a CIwt of 0.54. However, BXA in combination with ribavirin induced an antagonist effect with a CIwt of 1.91.

In the A(H3N2) background (Table 2B), BXA also demonstrated synergistic effect when combined with each NAI. The CIwt were 0.47, 0.49 and 0.42 for zanamivir, oseltamivir and peramivir, respectively. Furthermore, the combination of BXA and favipiravir also had a highly synergistic activity with a CIwt value of 0.16. Again, the combination of BXA and ribavirin led to an antagonist effect with a CIwt of 1.23.

Based on the results obtained in ST6-GalI-MDCK cells, we further evaluated the efficacy of the selected two-drug combination ratios determined in Table 2A in the MucilAirTM reconstituted HAE infection model [27]. Note that different MOIs, 0.1 and 0.01, for A/California/7/2009 (H1N1) and A/Texas/50/2012 (H3N2) viruses, respectively, were based on previous characterization experiments and were used to reflect a comparable replication kinetics curve for both subtypes. As shown in Figure 1, A(H1N1) apical viral titers peaked at 48 hpi in the untreated group, reaching mean values of 4.4 (±3.6) x108 TCID50/mL. As expected, treatment with 10 nM BXA was strongly effective by inducing a 3 log10 reduction in mean peak viral titers, reaching 5.6 (±4.3) × 105 TCID50/mL. Treatment with 2.7 µM zanamivir (ratio 1:270), 2.1 µM oseltamivir (ratio 1:213) or 310 nM peramivir (ratio 1:31) induced 1.4 log10 (Figure 1A), 3 log10 (Figure 1B) or 2 log10 (Figure 1C) reductions in mean peak viral titers, respectively. Conversely, treatment with 83 µM favipiravir (ratio 1:8333) induced a 24 h delay on peak viral titers, which were comparable to those of the untreated group (Figure 1D). Most importantly, the antiviral effects of the four two-drug combinations tested were systematically higher than those of single-drug treatments, notably in the case of BXA + NAI (zanamivir or oseltamivir), which showed at least a 1 log10 reduction in mean viral titers when compared to the most effective of the single-drug treatments at all time points. The antiviral effect of both single-drug and combination treatments was further supported by TEER values, which remained stable all throughout the experiment, contrary to what was observed for the mock-treated controls. Of note, the extreme disparity of the EC50 ratio obtained for the combination of BXA and ribavirin (1:10,000) hampered its evaluation under experimental conditions in which the ribavirin concentration was sufficiently low not to induce a very significant antiviral effect. 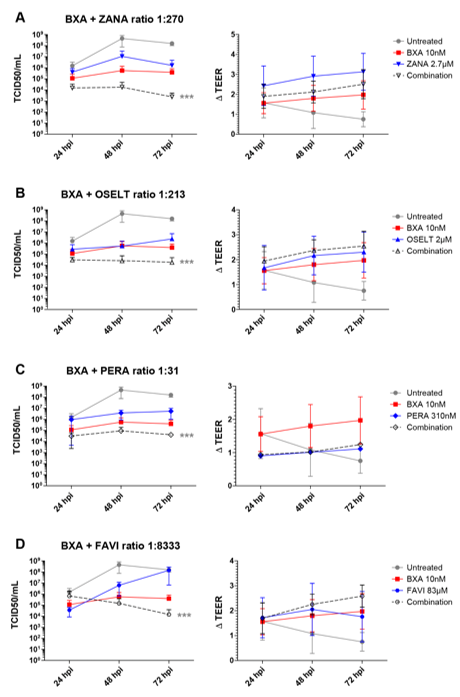 In the case of A(H3N2), apical viral titers peaked at 72 hpi, reaching mean values of 7.5 (±6.4) ×109 TCID50/mL, in the untreated group (Figure 2). Interestingly, treatment with 10 nM BXA almost completely inhibited viral replication (), for which this dosage was too high to be compatible with the evaluation of drug combination in the A(H3N2) HAE model. We therefore used 5 nM BXA as the reference treatment, which induced a 1.5 log10 reduction in mean peak viral titers, reaching 4.9 (±1.78) ×108 TCID50/mL at 72 hpi. Treatment with zanamivir 625 nM (ratio 1:125) and peramivir 12.35 nM (ratio 1:2.47) induced significant reductions in viral production, as evidenced by 1.7 log10 (Figure 2A) and 1.3 log10 (Figure 2C) lower mean peak viral titers compared to those of the mock-treated controls, respectively. On the other side, single-drug treatment with oseltamivir 105 nM (1:21), favipiravir 2.63 µM (ratio 1:526) and ribavirin 555 nM (ratio 1:111) (Figure 2B,D and E) demonstrated relatively mild antiviral effects, inducing less than 0.5 log10 reductions in mean peak viral titers. Similar to what we observed for A(H1N1)pdm09, the antiviral effects of the different two-drug combinations tested against A(H3N2) were higher than those of single-drug treatments. Of note, the observed differences were statistically significant. The best synergy was obtained with the BXA + oseltamivir combo, which showed a 3 log10 reduction at 48 hpi and a ≥2 log10 reduction at 72 hpi in mean viral titers compared to the mock-treated but also the single-drug treatment conditions. Moreover, BXA + zanamivir and BXA + peramivir improved single-drug treatment at 72 hpi by almost 2 log10 and 1 log10, respectively. TEER measurements further supported these observations, as they remained stable for BXA + oseltamivir, BXA + zanamivir and BXA + peramivir throughout the experiments, which was not the case for single-drug treatments other than BXA. Interestingly, despite the almost negligible antiviral effect of favipiravir and ribavirin single-drug treatments, both BXA + favipiravir and BXA + ribavirin showed 2.8 log10 and 2.2 log10 reductions in viral titers at 48 hpi, respectively. Nevertheless, such an effect was not observed at 72 hpi, which is in line with the reduction in TEER values observed at this time point. 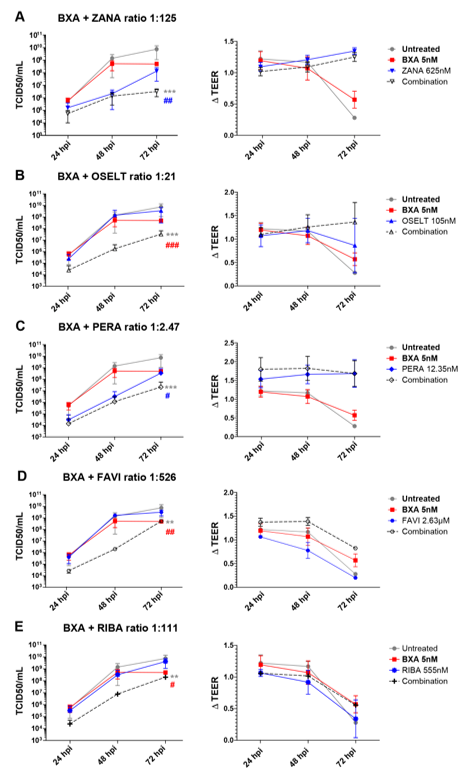