This study addresses the reliability of power systems by examining their own importance and the effect of cyber-attack on power systems during sudden load shifts in frequency disturbing aspects. Using the continuous power flow approach with static var compensator (SVC) and static synchronous compensator (STATCOM), the maximum load capacity of the load buses is calculated. The result shows that the FACTS devices' responsive power support depends on the FACTS devices being properly placed in the network. The stable limit of speed control for load frequency control (LFC) and integral controller gain for automatic generation control (AGC) is extracted from their characteristic equations to evaluate the effect of cyber-attack on power systems. Simulations are conducted to demonstrate the frequency variations and oscillations of the power system, depending on the nature of the cyber-attack (positive biased or negative biased attack). Finally, to eliminate these oscillations, a feedback LFC block with a three-input shift is proposed.

The alternator frequency varies with a power station's load switch. The frequency sensor detects the system frequency and the LFC sets the primary mover speed to compensate for the system frequency according to the signal from the frequency sensor. In this study, the vulnerable quantity is known as speed regulation. Because of cyber-attack, malfunctioning of the governor speed regulator makes the prime mover's speed out of reach and results for unstable device rate.

Appropriate selection of integral controller gain (KI) is essential for the proper functioning of AGC. Improper choice of the KI value results in a governor failure in setting the correct point to restore the frequency of the device. This research describes KI as the other weak cyber-attack quantity. Any KI change due to unauthorized access to the AGC loop may cause system frequency oscillation that disturbs the stability of the system. Cyber-attack is divided into two forms in this work, one is positively biased, and the other is negatively biased, depending on the affected value of speed regulation (R) and integral controller gain (KI). First, the control system is believed not to be targeted by unauthorized individuals. In this condition, if a sudden change under load (increase in load) occurs, the device frequency will drop for a brief instant below the nominal frequency. The frequency sensor detects the device frequency drop and proper speed control sends signals to the LFC.  The LFC sets the governor speed control to compensate for the prime mover speed and regulate the system frequency according to the signals from the frequency sensor. It will only be necessary for the governor's speed limit to be properly set. Due to cyber-attack, LFC may not be able to set the regulation properly and if this occurs then the system frequency will oscillate and make the system unstable. Using the Routh-Hurwitz series, the stable speed limit (R) can be obtained from the characteristic equation of the LFC loop.

This study considers an insulated power plant with the following parameters at a nominal frequency of 50Hz with 250MW turbine output power and a sudden change in a load of 50MW [19]. From the above formula, the stability limit of speed control is obtained as R > 0.0133 using the power system parameters of the Table 5.1and Routh-Hurwitz set. From Fig. 1(a), If R=0.05, the frequency variance of the device is stable. Therefore, the fixed value of R should be 0.05 for the balanced operation of this power station. Any deviation from this fixed value results in the unstable variance of the device frequency. The uncertainty of system frequency deviation renders the governor unable to account for the difference in frequency i.e. In the case of a sudden change in load, the device frequency will not be restored. The deviation from the defined value of speed regulation is due to the cyber attack on LFC (Unauthorized access to LFC control). 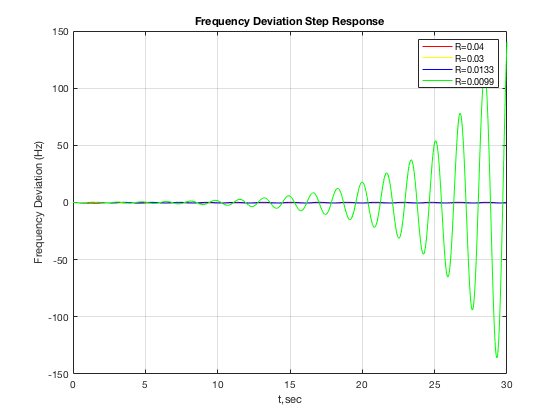 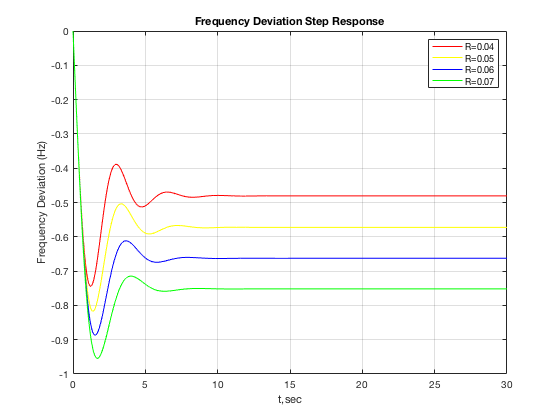