Cloud-cover information is important for a wide range of scientific studies, such as the studies on water supply, climate change, earth energy budget, etc. In remote sensing, correct detection of clouds plays a crucial role in deriving the physical properties associated with clouds that exert a significant impact on the radiation budget of planet earth. Although the traditional cloud detection methods have generally performed well, these methods were usually developed specifically for particular sensors in a particular region with a particular underlying surface (e.g., land, water, vegetation, and man-made objects). Coastal regions are known to have a variety of underlying surfaces, which represent a major challenge in cloud detection. Therefore, there is an urgent requirement for developing a cloud detection method that could be applied to a variety of sensors, situations, and underlying surfaces. In the present study, a cloud detection method based on spatial and spectral uniformity of clouds was developed. In addition to having a spatially uniform texture, a spectrally approximate value was also present between the blue and green bands of the cloud region. The blue and green channel data appeared more uniform over the cloudy region, i.e., the entropy of the cloudy region was lower than that of the cloud-free region. On the basis of this difference in entropy, it would be possible to categorize the satellite images into cloud region images and cloud-free region images. Furthermore, the performance of the proposed method was validated by applying it to the data from various sensors across the coastal zone of the South China Sea. The experimental results demonstrated that compared to the existing operational algorithms, EN-clustering exhibited higher accuracy and scalability, and also performed robustly regardless of the spatial resolution of the different satellite images. It is concluded that the EN-clustering algorithm proposed in the present study is applicable to different sensors, different underlying surfaces, and different regions, with the support of NDSI and NDBI indices to remove the interference information from snow, ice, and man-made objects. 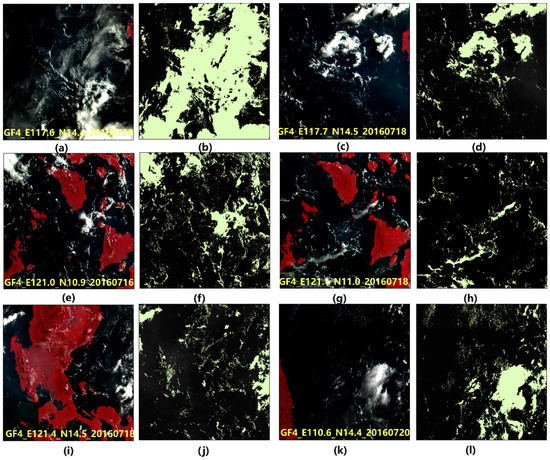 As depicted in Figure 3, the GF-4 PMS data-set were covered by all kinds of clouds. The thick cloud detection results obtained using the proposed algorithm at the coastal zone of the SCS matched well with the green lines, indicating that the algorithm performed well (Figure 3a2,b3,c3,e1,e2,f1). The thin clouds, which are difficult to detect, were detected accurately with a precise contour line corresponding to the cloud area (Figure 3a1,a3,b2,d2,f3). The low clouds above the land, which are also difficult to detect, could also be detected efficiently (Figure 3f2). The cloud detection results for small pieces of clouds over the coastal area obtained using the proposed algorithm were acceptable (Figure 3a2,b2,d2,f3). It is known that the underlying surface has a dramatic influence on the cloud detection result, particularly when the underlying surface is distinctly different. As depicted in Figure 3, several areas were located at the intersection of the ocean and the land. The results suggested the proposed algorithm could detect the cloud area with precision, regardless of the underlying surface (Figure 3a1,c1,d1,d2,d3). It was concluded that the thin and thick clouds above the ocean and the coastal area were recognized efficiently, as evidenced by the matching of the green contour line and the cloud area. Moreover, the broken clouds and tiny clouds could also be detected with precision.

Figure 3. Visual verifications in the case of the coastal area of the SCS for GF-4 data. There are six blocks (a–f) that corresponded to the six data used, as presented in Figure 1a,c,e,g,i,k. The three magnified images (red boxes) below each block provide detailed information of that particular block (a–f), which mainly includes the cloud detection results for thick clouds, thin clouds, broken clouds, and low clouds in the study area.