Corn (Zea mays L.) is one of the major food crops, and it is considered to be a very distinctive plant, since it is able to produce a large amount of the natural polymer of starch through its capacity to utilize large amounts of sunlight. Corn starch is used in a wide range of products and applications. In recent years, the use of nanotechnology for applications in the food industry has become more apparent; it has been used for protecting against biological and chemical deterioration, increasing bioavailability, and enhancing physical properties, among other functions. However, the high cost of nanotechnology can make it difficult for its application on a commercial scale. As a biodegradable natural polymer, corn starch is a great alternative for the production of nanomaterials. Therefore, the search for alternative materials to be used in nanotechnology has been studied.

Zea mays L. is a member of Poaceae family that is generally called corn and maize. It has been developed as a staple food in several region of the globe [1]. Hitchcock and Chase in 1971 explained the botanical features of corn [2]. A heavy, vertical, solid stem and large, thin leaves form a tall annual grass. The female inflorescences (pistillate) that develop to be the torn ears are spikes with a consolidated hub, bearing matched spikelets in longitudinal columns; each line of combined spikelets as a rule makes two lines of grain. The yellow and white corn assortments are the most famous as food, although red, blue, pink, and dark piece assortments are regularly grouped, spotted, or stripped. Every ear is enclosed by customized leaves called shucks or husks [3]. Mangelsdorf (1950) reported that the corn initially originated from America, and it was originally revealed by Christopher Columbus in 1492. It is one of the main food sources worldwide. In the 1600s and 1700s, the Americans used corn as their staple food, and in the 1800s, corn turned out to be one of the important commercial crops [4].

Corn is broadly categorized into six varieties—namely dent corn, flint corn, pod corn, popcorn, flour corn, and sweet corn. The assortment of corn-based human food incorporates grinding the corn into cornmeal or masa, squeezing into corn oil, and obtaining a mixed refreshment beverage such as whiskey bourbon as a result of fermentation, distillation, and chemical feedstock [5].

Corn is extensively cultivated all over the world, and a large quantity of corn is cultivated every year (Figure 1). As per the International Grains Council 2013, the total world production was 1.04 billion tons. In America, corn is one of the major grains; the country produced 361 million metric tons of corn in 2014. Over the past few years, corn farmers experienced a stable hike in yearly revenues. In 2016/17, the U.S. delivered more than 33% of the overall corn production. 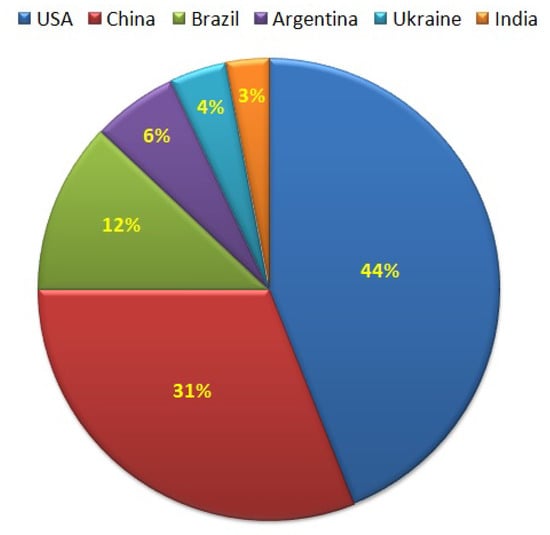 Zhao et al. (2008) declared that corns are rich in dietary fiber, nutritional supplements (vitamins A, B, E, and K), minerals (magnesium, potassium, and phosphorus), phenolic acids and flavonoids, plant sterols, and various phytochemicals (lignins and bound phytochemicals). However, the different assortments of corn have impressively various phytochemical profiles concerning flavonoids and carotenoids. Blue, red, and purple corn have a higher grouping of anthocyanidins (up to 325 mg/100 g DW corn) with cyanidin subsidiaries (75–90%), peonidin derivatives (15–20%), and pelargonidin subordinates (5–10%). Yellow corn is an excellent source of carotenoids (up to 823 g/100 g DW corn) with glutein (half), zeaxanthin (40%), β-cryptoxanthin (3%), β-carotene (4%), and α-carotene (2%). High-amylose corn is rich in amylase (up to 70%, all things considered) [6].

Next to corn grain, sweet corn is utilized as one of the most popular vegetables in North America and China, and its notoriety has expanded across the globe. Sweet corn is one of the top six vegetables utilized in the United States [7]. Canned and solidified sweet corn ranks third, placing it in the middle of vegetables utilized in the United States. [8]. This review discusses the potential of corn starch-based nanomaterial properties, simulations, and their wide range of applications.

Starch is commonly known as amylum, and it is a polymeric carbohydrate consisting of a large number of glucose units connected by glycosidic bonds (Figure 2). It is recognized as a carbohydrate in human diets. It occurs in many staple foods such as potatoes, wheat, corn, rice, and cassava [9]. Pure starch extracted from plants was converted into flour-like white powder, which is insoluble in water [10]. This powder contains minute granules, and the width varies from 2 to 100 µm, and it has a thickness of about 1.5 µm. The fundamental formula of this polymer is (C6H10O5)n, and the glucose monomer is called α-D-glycopyranose (or α-D-glycose). In the view of their botanic source, starch crude materials contain different trade factors, sizes, shapes, and concoction content [11]. 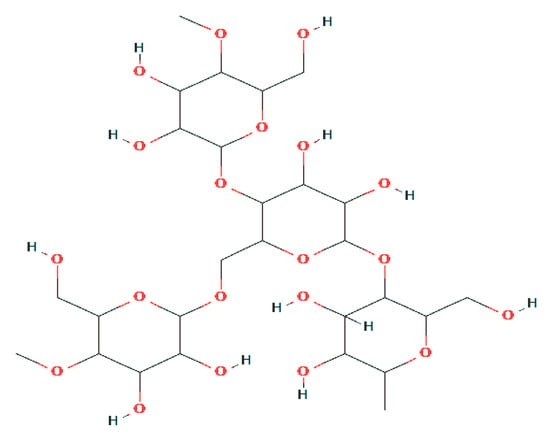 In many industries, starch is used as emulsifiers, viscosifiers, defoaming agents for encapsulation, and as sizing agents. In the detergent industries, starch is used in the production of biodegradable, non-toxic, and skin-friendly detergents. In many chemical industries, it is used for the production of surfactants, polyurethanes, resins, and in biodegradable plastics. It is also used in the construction industries for concrete admixtures, plasters, and insulation, as well as in oil drilling, mineral, and metal processing [12]. In food industries, starch is improved into sugars, for instance by malting, and the starch is fermented to form ethanol, which is used in the production of whiskey (by brewing) and biofuel. Inside the pharmaceutical business, starch was used as an excipient, pill crumble, and folio [13]. Corn also produces high amylose starch; it has an elevated level of gelatinization temperature compared to other types of starch and maintains its resistant starch content during baking, mild extrusion, and in further food processing techniques [14]. It was utilized as an insoluble dietary fiber in processed foods—for example, bread, pasta, cookies, crackers, pretzels, and other low moisture foods [15]. It has been suggested that starch gives the medical advantages of unblemished entire grains [16].

Around 80% of the world’s creation of starch is corn starch, which was extracted from corn pieces (content 64–80%) through the wet-processing process [17]. Corn starch is used in a broad variety of foodstuffs and applications. Basic corn starches have a small amount of protein (0.35%), lipid (0.8%), ash, and >98% of two polysaccharides, namely amylose and amylopectin. Starch comes from plant sources that are insoluble in water, and at room temperature, it is in the form of granules [18]. Usually, corn and waxy maize starch granules differ in their size from 2 to 30 mm; most fall in the range of 12–15 mm. They also differ in shape, appearing as cross-sections of polygons [19].

The unique physiochemical and functional characteristics of natural starches such as their good biocompatibility, biodegradability, non-toxicity, and degradation make them useful for a wide range of biomedical applications (Figure 3). Several biodegradable starch polymers, particularly in the field of bone tissue technique, drug delivery systems, and hydrogels, have been broadly examined during the last few years [20]. 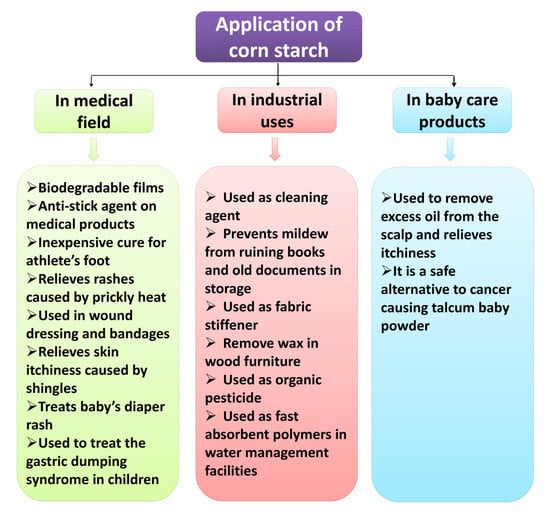 Salgado et al. (2005) have shown that the biodegradable bone cements, which are based on starch, can provide a temporary structural base and gradually vanish thereafter. Furthermore, biodegradable polymers based on starch have been reported for bone tissue engineering scaffolding [21]. According to Gomes et al. (2002), an ideal scaffold must be designed on the basis of a biomaterial that has adequate rates of degradation compatible with new tissue formation. Therefore, the choice of starch can be used for scaffolding applications [22]. In drug delivery systems, the further potential attraction of biodegradable polymers based on starch has been reported. The drug administration device of biodegradable starch is effective in deliverability without surgery [23] .The findings of the above studies show that the starch can be used in the medical industry as biomaterials. However, current biodegradable polymers based on starch clearly have lower mechanical characteristics, thus limiting the ability to be utilized in various biomedical applications. Therefore, the production of nanocomposite starch content was initiated to remove biodegradable starch limitations alone [24]. Liu et al. (2016) developed a nanocarrier-based starch nanoparticles in which four polyphenols are inserted: (+) -catechin, (−) -epicatechin, (−) -epigallocatechin-3-gallate, and proanthocyanidin. In addition, the methyl thiazolyl tetrazolium assay demonstrated low cytotoxicity and good biocompatibility [25].

Nanoparticles have been an important topic of research in the area of anti-cancer drug delivery. The distribution application of nanoparticles made of biodegradable materials such as polylactic acid, proteins, and polysaccharides has been documented. Polysaccharide systems are becoming increasingly important among all the studies because of their low toxicity, large abundance, and high biocompatibility. However, relatively, very few nanoparticle supply structures dependent on starch are recorded [26]. Continuation of the cell-, tissue-, or disease-specific release of therapeutic nanoparticles is a potentially powerful technology. Xiao et al. (2012) reported a drug known to maintain 5-fluorouracil (5-Fu) antitumor loading and release of the new drug carriers/dialdehyde starch nanoparticles (DASNP). The aldehyde group that significantly enhanced breast cancer cell inhibition (MCF-7) was conjugating 5-Fu, the model medicine, into nanoparticles [27].

Processing of Cereals and Derived-By-Products