Hyaluronic acid (HA), which was first isolated in the 1930s, is a distinctive glycosaminoglycan, which, unlike other glycosaminoglycans such as heparan sulphate, chondroitin sulphate, and keratan sulphate, is non-sulphated[1]. It is widely used in treating osteoarthritis[2][3][4][5][6][7][8] and in tissue-engineering approaches for disc repair[9][10]. HA (Figure 3) is an abundant polymer of the ECM with a molecular weight of approximately 106–107 Da in vivo[11]. HA molecule comprises of chains of constantly repeating disaccharides, glucuronic acid and N-acetylglucosamine, which are symbolized by GlcA-β (1→3) and GlcNAc-β (1→4) respectively (Figure 1)[12]. On the intracellular aspect of the cell membrane, synthesis of HA occurs through the hyaluronan synthases (HAS) family, comprised of three types of synthases, activated via different GFs to produce diverse forms of polymerized HA[13]. HAS1 and HAS2 produce the high molecular weight (HMW) of HA of 2–4 × 106 Da, while the low molecular weight of HA (LMW) of 1 × 105–1 × 106 Da is produced by HAS3[13]. These enzymes are regulated by miRNAs[14] and GFs such as TGF-β[15]. Once synthesized, HA is secreted either on the cell surface from the plasma membrane or into the ECM because of its large size[13][16]. The body composition of HA is 15 g[17]. Daily, 33% of HA is turned over through several roots: (i). via the lymphatic system or (ii). via the circulation through the liver or (iii). lysosomal digestion after HA binds to its receptor and is internalized[18]. Furthermore, HA turnover can take place as a result of pathological conditions such as tissue injury and remodelling as a result of oxidative stress and free radicals, HA internalization and degradation, and clearance of HA from tissues via the lymphatics and vascular system[19]. Regarding the receptors through which HA binds to be cleared by the liver and lymph nodes, there are particular receptors such as the hyaluronan receptor for endocytosis 1 (HARE1), lymphatic vessel endothelial hyaluronan receptor 1 (LYVE1) and CD44. From the previously mentioned three receptors, HARE1 is considered the major role player through the lymph and vasculature[18]. HA is internalized and degraded when it cannot be removed by the vasculature and lymph[19][20]. In this process, first HA binds to one of its receptors such as receptor for HA-mediated motility (RHAMM), layilin or CD44 after which it is degraded by hyaluronidase-2[15][19][20], then it is digested into fragments through N-glucuronidases and N-acetylglucosaminidases to completely break down the remaining glycans into monosaccharides[20]. 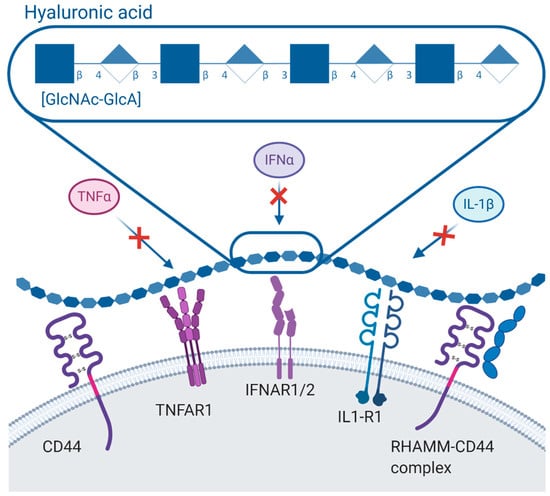 Figure 1. The anti-inflammatory role of hyaluronic acid (HA). HA molecule (on the top) is represented according to its international symbols by repeated units of glucuronic acid (GlcA-β1-3) and N-acetylglucosamine (GlcNAc-β1-4) disaccharides. The anti-inflammatory role of HA is mediated through reacting with its several receptors such as CD44 and receptor for HA-mediated motility (RHAMM) preventing the cascades signalled by inflammatory cytokines such as IFNα, TNFα and IL1β through deterring the contact with their receptors.

2. The Key Function of Hyaluronic Acid in Repairing the Intervertebral Disc

The biochemical properties of the HA molecule are entirely dependent on its size[19][21][22]. Within tissues, the HA molecule interacts with various proteins comprising of hyaladherins such as CD44, RHAMM (CD168) (Figure 1). In contrast, inside the ECM, it interacts with N-terminals of proteoglycans such as aggrecan (ACAN), versican, brevican, neurocan and TNFα-stimulated gene-6 (TSG-6) protein[19][23]. These fundamental interactions are essential for HA function in terms of cell-to-cell communication and signalling[15][24]. The mechanical properties of HA can be attributed to its high molecular weight structure. HA is capable of absorbing water approximately 10–104 times its mass as it is negatively charged and is considered an osmotically active molecule[14][15][25][26] . Due to its large volume while hydrated, it can fill large spaces, therefore absorbing shocks and acting like a lubricant[25][27].

HA-CD44 interactions mediate endocytic activity and activate Rho and Rac1 GTPases to regulate cytoskeletal organization[28]. CD44 activation also activates src-related tyrosine kinases to induce cell proliferation through NF-κB signalling[29]. RHAMM activates pp60c-src tyrosine kinase to modulate focal adhesions for RHAMM-mediated cell mobility[30]. Its ability to form large extracellular networks through cell–matrix binding inhibits cytokine binding to prevent downstream signalling (Figure 1)[25][31]. Therefore, HMW HA is capable of inhibiting the signalling of inflammatory cytokines and matrix-degrading enzymes (TNF-α, IL-8, iNOS, aggrecanase 2, matrix metalloproteinases (MMP)s) that were evident upon treating chondrocytes with HMW HA, which also resulted in inhibition of phagocytosis and macrophage activation[32][33]. In tissue injury and remodelling, enzymes break down HMW HA resulting in fragments of LMW HA which can induce phosphorylation of p38 or p42 or p44 mitogen-activated protein kinase (MAPK) and NF-κB which are associated with toll-like receptor (TLR)4 signalling[13][34]. Depending on the tissue type and the size of LMW HA fragments (f-HA)s, pro-inflammatory cytokines can be induced[13][31]; therefore, angiogenesis and tissue remodelling is stimulated[19][21]. It was discovered that human disc cells treated with 6–12 disaccharide fragments of HA can dramatically up-regulate catabolic enzymes such as IL-1β, IL-8, IL-6, MMP1, MMP13, and cyclooxygenase (COX2). Furthermore, it was identified that TLR-2 mediated the role of f-HAs in stimulating the protein expression of IL-6, and both IL-6 and MMP-3 were supported by the MAPK signalling pathway[35].