DBM among Adults in China

Few studies have focused on quantifying the double burden of malnutrition (DBM) phenomenon in China. We aimed to clarify the prevalence of DBM among Chinese adults as well as to examine whether daily dietary micronutrient status varies by body mass index (BMI) categories.

Among Chinese studies, previous research on dietary intakes of micronutrients focused on differences in intakes or status by sex or age groups for which the Chinese Dietary Reference Intakes 2013 have been established [1], and previous results reported that women had lower dietary intakes for retinol, vitamins A and C, thiamine, riboflavin, calcium, phosphorus, magnesium, iron, zinc, copper, and selenium compared with men [2][3][4], and a significant higher percentage of women were not meeting the estimated average requirement (EARs) for several nutrients such as retinol, riboflavin, and thiamine without considering their BMI status [2].
To date, we have little understanding of the DBM at intra-individual level, with underweight/overweight/obesity and micronutrient deficiency being present in the same individual, or of micronutrient intakes status by body status among Chinese adults, particularly data in adults by sex are sparse. Therefore, explorations are needed to address this limit and to clarify whether usual daily dietary micronutrient status varies by BMI categories. Here, we focused on quantifying the prevalence and distribution of the DBM among Chinese adults and estimating the dietary micronutrient intakes and the prevalence of nutritional inadequacies among them, using data from the China Health and Nutrition Survey (CHNS, 2015), to further identify differences in micronutrient status from food between BMI categories. Such findings are important for policymakers to support actions to implement interventions to improve diet quality to address undernutrition and overnutrition in Chinese individuals.

2.1. Double Burden of Undernutrition and Overnutrition

1 All values are n (%). CHNS, China Health and Nutrition Survey; 2 malnutrition defined as having underweight/overweight/obesity and micronutrient deficiency; 3 showed a significant difference in the prevalence of multiple forms of malnutrition tested by Chi-square test (p < 0.05). 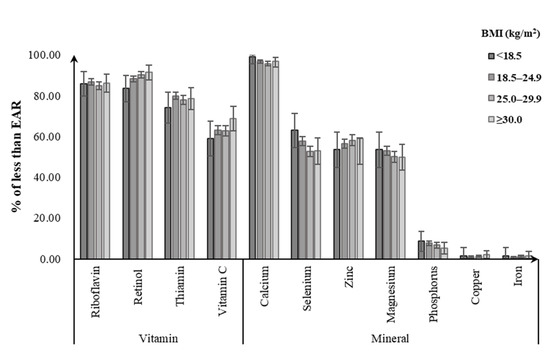 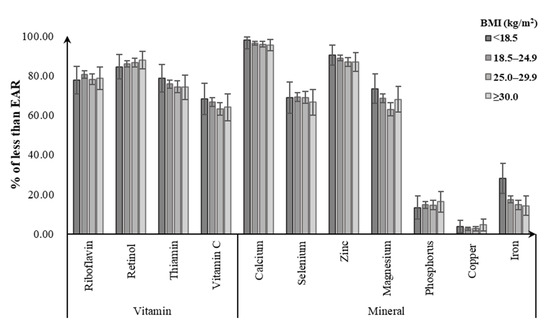 Assessment of dietary micronutrient intakes showed that close to 100% of participants had multiple micronutrient deficiencies, not meeting the EARs for at least two dietary selected micronutrient intakes, regardless of their BMI categories. Similarly, close to 100% of underweight men and women had multiple mineral deficiencies (men: 98.4%, women: 99.3%), followed by normal-weight (men: 95.1%, women: 97.5%), overweight (men: 93.8%, women: 97.4%), and obese individuals (men: 91.8%, women: 97.2%). For multiple vitamin deficiencies, the overweight men tended to have a higher percentage (92.2%), while the overweight women had a lower one (86.9%) (Figure 3). Both men and women suffering from diet-related chronic diseases had increasing percentages of multiple micronutrient deficiencies and its subtypes with the increasing BMI status, which were lower than that without consideration of chronic diseases (Figure 4).

Using CHNS 2015, this study quantified the DBM among Chinese adults aged 18 to 59 years as well as examined whether usual daily dietary micronutrient status varies by BMI categories. Our results indicated that nearly half of subjects faced the problem of DBM, of which 40% of adults experienced overweight/obesity and micronutrient deficiency simultaneously; more than 80% of participants had at least two selected vitamin or mineral deficiencies in all BMI categories, and there were weight composition disparities in dietary intake status for several key micronutrients.

Daily consumptions of dietary micronutrients were relatively low among Chinese men and women because a large number of individuals did not reach the Chinese EAR for several key micronutrient intakes from foods. Mean daily dietary intakes of vitamins among men and women from all BMI categories in our study were lower than that in Korea [5], while the inverse correlation was found for most mineral intakes. Studies in other countries reported that lower intakes of vitamins and minerals were observed across higher BMI categories [6][7], which indicates that BMI is inversely associated with micronutrient intakes and obesity is associated with chronic inadequate intakes of micronutrients [8]. Consistently, the current study observed that the prevalence of insufficiencies for riboflavin, retinol, vitamin C, and zinc from foods was particularly high among obese men; meanwhile, obese women did not meet the Chinese EAR for dietary intakes of retinol, phosphorus, and copper from food, with a greater percentage than for other BMI groups. However, the similar correlation between weight status and the usual dietary micronutrient intake was not observed among male and female participants in this study. A trend towards a decrease in most micronutrient intakes over the study period from 1991 to 2015 [2], and multiple diversities in age, study population, the study design, and dietary structures, may make these differences.

Dietary calcium is one of the essential micronutrients in keeping bones healthy [4], and may have beneficial effects on adiposity, insulin resistance, dyslipidemia, and blood pressure [9]. However, dietary calcium inadequacy has been identified as one of the most prevalent deficiencies in the Chinese adult population [4], which was not much different from that in foreign individuals [10]. Of note, nearly all of Chinese men and women aged 18 to 59 years failed to reach the EAR for dietary calcium intake regardless of their BMI status in our study. Actions therefore on improving the population’s poor dietary calcium intake, such as nutritional interventions on increasing dietary intakes of milk and dairy products, are necessary to take. Dietary retinol, another key micronutrient concern, plays an important role in vision, immunity, embryological development, and growth hormone production [11]. A study presented that approximately 87% of Chinese adults consumed less retinol than the EAR, and only 6% of adults consumed more than Chinese recommended nutrient intake in 2015 [3]. Consistently, there was also a substantial percentage of Chinese adults who had low intakes of retinol in all BMI groups in our study. This indicated that dietary retinol insufficiency remained a major micronutrient deficit among Chinese men and women. In addition, we observed dietary zinc inadequacy prevailed among women, and the prevalence was particularly high in the underweight group. Zinc deficit in the diet was associated with adverse long-term effects on growth, immunity, and metabolic status of surviving offspring [12]. There is a need to address possible effective approaches or guidance for dietary diversification and management.

The present study showed that Chinese adults aged 18–59 years faced the burning issue of DBM; Chinese men and women across different BMI categories had a poor-quality diet, with intakes well below the EARs for several key micronutrients (i.e., calcium, retinol, riboflavin, thiamin, vitamin C, selenium, zinc, and magnesium), and these inadequacies were more prevalent in underweight and obese groups. The study also showed the extent to which multiple micronutrient deficiencies overlap in these settings. Understanding and controlling micronutrient inadequacies for Chinese adults can have significant public health impact. Therefore, the promotion of population-wide intakes of more nutrient-dense foods—through encouragement of self-selection in food supply and reinforcement of precise dietary supplement programs or interventions—is needed to tackle the inadequate intake of micronutrients for target subgroups in China.