Subjects: Others
View times: 86
Submitted by:

Dengue and chikungunya are the vector-borne diseases, that are transmitted to humans by the mosquitoes Aedes aegypti and Aedes albopictus. This study aimed to show the spatial and temporal distribution of those diseases in the Hindu Kush Himalayan region.

Dengue (DEN) is one of the fastest spreading infectious human diseases of the twenty-first century, and chikungunya (CHIK) is an emerging public health threat worldwide [1]. DEN is caused by the dengue virus (DENV), which is distinguished in 4 serotypes, DENV-1 to -4 and CHIK, by the chikungunya virus (CHIKV) [2][3]. According to estimates of the World Health Organization (WHO), around 100 million DEN infections occur worldwide annually, and approximately 2.5 billion of the world’s population live in DEN-endemic areas [4]. Thus, it has a major socioeconomic and public health impact on the epidemic regions [5]. As CHIKV/DENV/malaria share almost the same geographic areas and show similar clinical signs and symptoms, including fever, headache, nausea, and, in a few cases, hemorrhage, it is difficult to distinguish between these vector-borne diseases by clinical symptoms alone [4][6][7]. Due to this similarity of symptoms, misdiagnosis and under-reporting of actual DEN/CHIK cases in malaria-endemic areas are very common [7].

The Hindu-Kush Himalayan (HKH) region is among the most diverse regions of the world in terms of environmental, sociocultural, and economic aspects [11]. This region covers a wide range of lowlands to highlands, extending from Afghanistan in the west to Myanmar in the east and includes all of Nepal and Bhutan and the mountainous areas of Afghanistan, Bangladesh, China, India, Myanmar, and Pakistan [11][12]. In 2017, approximately 240 million people were living in the HKH region, and, in 2030, the population is predicted to increase to ~300 million (www.icimod.org). Anthropogenic climate change, along with rapid landscape and demographic changes, is altering the environment of the HKH region dramatically, causing the shifting of disease vectors and disease transmission from tropical into temperate regions and highlands [12][13][14]. The literature reports outbreaks of VBDs from new areas of the HKH region and also a higher number of VBD cases, for example, in Nepal, the outbreak of 2019 [15].

2. DEN and CHIK in the Hindu Kush Himalayan Region

The DEN cases in Pakistan were earlier reported among employees of a construction contractor at the power generation plant in Baluchistan in 1995 [40], but no further DEN cases were reported in this HKH country until 2007. Lack of proper surveillance systems or complexity in laboratory diagnosis due to infection with other diseases like malaria, typhoid, and hepatitis might cause an underreporting of cases [41]. In the meantime, frequently reported DEN incidence in this region from 2007 onwards [42] might be driven, in part, by increasing human mobility, particularly in areas with climatic suitability for the mosquito vector [43]. A mobile-phone-based study conducted in Pakistan shows the mobility of infected travelers from endemic regions to all other parts of the country during the outbreak in 2013 [44]. In Nepal as well, the improvement in social and infrastructure development such as the expansion of roads, rapid urbanization, and increase in trade and business opportunities after the end of decade-long armed conflict (1996–2006) has increased the mobility of people within and from neighboring countries [45]. This fact might be the cause for the rapid expansion of DENV in this HKH country, supported by entomological investigations that show the presence of Ae. albopictus in Nepal in 1956 already [46]. However, the primary vector for DEN Ae. aegypti was reported for the first time in 2006 from the lowlands of Nepal [47], later in 2009 from Kathmandu, which is a hilly region of Nepal [48], and reports of Ae. aegypti and Ae. albopictus from at least 2000 m above sea level [49]. In parallel, cases of DEN were reported from Terai (lowland) and hill and mountain regions (68 out of 77 districts of Nepal) in 2019 [15]. Although the recent study in Afghanistan [50] reported the first locally acquired DENV cases in 2019, our study shows that dengue antibodies were detected earlier, between 2010 and 2011, among Afghan National Army recruits in Afghanistan. However, DEN was distributed more frequently or rapidly in the HKH countries of India, Nepal, Pakistan, and Bhutan. China is the only HKH country with no reported cases of DEN in the HKH region.

The period of outbreaks of DEN and CHIK varies only slightly within the HKH region. Most of studies from India [17][20][27][30][32] and Nepal [60][61][62][63][64][65][66][67] show almost consistent seasonality of DEN outbreaks, lasting from June to December. The majority of the studies from India and Nepal reported maximum DEN cases in September, October, and November in the postmonsoon period [17][60][18][61][20][21][22][23][62][26][27][64][28][65][31][66][35]. Our findings concerning a seasonal distribution of DEN in HKH countries are similar to the studies on Brazil [68] and Thailand [69]. These findings are further supported by entomological studies conducted in Nepal [49] and in Assam, India [70], that show a high abundance of vectors Ae. aegypti and Ae. albopictus at the end of the monsoon and postmonsoon season (September to November) compared to the winter season. The peak for DEN transmission during the postmonsoon season might be due to the most favorable weather conditions, including moderate rainfall, mild mean temperature, and optimum temperature range, which help vectors to breed, survive, and reproduce [49]. Temperature fluctuations also influence DEN infection in mosquitos [71]. Accordingly, adult Ae. aegypti live longer and, thus, were more likely to become infected under moderate temperature fluctuations. Moderate temperature fluctuations are typical during high DEN transmission season, whereas large temperature fluctuations favor a low dengue transmission season [71]. In Ae. albopictus, a temperature fluctuation from 28°-23°-18°C showed a probability of lower DEN transmission (in regard to virus titer in the salivary glands) than a constant 28 °C temperature [72]. Accordingly, vector activity and, thus, virus distribution are linked since temperatures influence, especially during the DEN season, virus transmission of the mosquitos.

The scientific reports of DEN and CHIK outbreaks in the HKH region have gradually increased from 2004/2005 until 2020. The reported incidence rates show an increase in disease burden over time (Figure 1). Accordingly, this increasing trend indicates the expansion of these disease vectors in the HKH region. The distributional shifts and increasing abundance of those disease vectors are also directly or indirectly influenced by weather variables such as temperature, humidity, and precipitation [33]. The Intergovernmental Panel on Climate Change (IPCC) also concludes that anthropogenic climate change, in particular, the changing temperature and precipitation patterns, has already altered the distribution of vector-borne diseases worldwide [73]. Nevertheless, the impacts of climate change on the distribution of DEN vectors should always be considered in the context of multiple social, behavioral, economic, environmental, and health system factors. For instance, human mobility from DEN endemic areas to non-DEN-endemic areas is vital for determining the changes in exposure and susceptibility to the DEN virus in the face of climate variability and change [74]. Furthermore, problems with water scarcity and, consequently, human behavior can even increase the breeding opportunities for DEN vectors [45]. The dry climate could force local communities to store water in containers, which ultimately increases the breeding sites for Ae. aegypti and Ae. albopictus [49][75]. 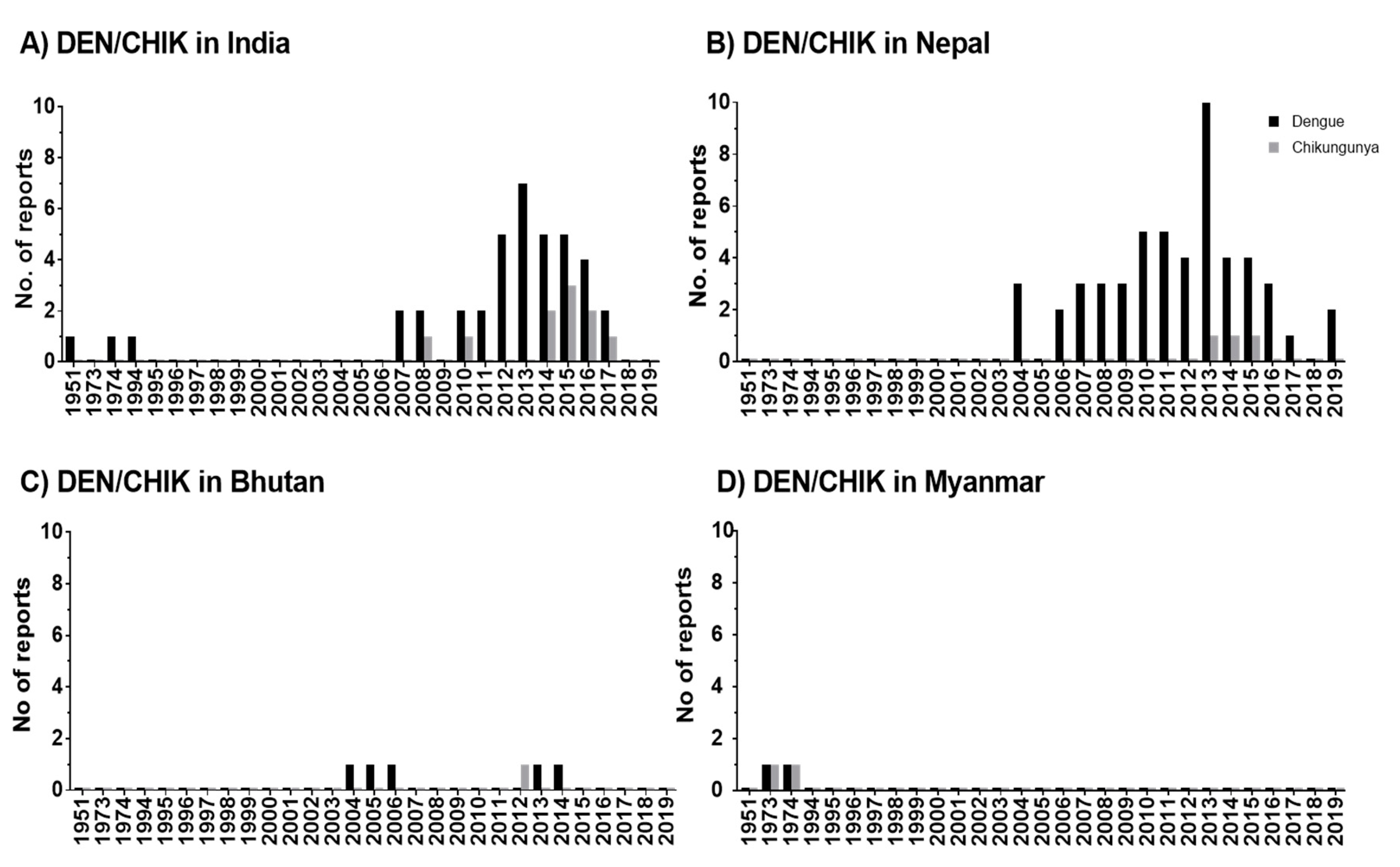 Figure 1. Temporal distribution of DEN and CHIK reports in the HKH region of India (A), Nepal (B), Bhutan (C), and Myanmar (D). In publications, the study has been conducted within one or multiple years. Therefore, here, the numbers are given by considering the individual study year as individual reports. Zero reports of DEN/CHIK are indicated as 0.1 value.