The consequences of anthropogenic climate change are one of the major concerns of conservation biology. A cascade of negative effects is expected to affect various ecosystems, one of which is Central European coniferous forests and their unique biota. These coniferous forests are the primary habitat of many forest specialist species such as red wood ants. Climate change-induced rising of temperature allows trees to skip winter hibernation, making them more vulnerable to storms that cause wind felling, and in turn, promotes bark beetle infestations that results in unscheduled clear-cuttings. Red wood ants can also be exposed to such habitat changes. We investigated the effects of bark beetle-induced clear-cutting and the absence of coniferous trees on colonies of Formica polyctena, including a mixed-coniferous forest as a reference. Our aim was to investigate how these habitat features affect the nest characteristics and nesting habits of F. polyctena. Our results indicate that, in the absence of conifers, F. polyctena tend to use different alternatives for nest material, colony structure, and food sources. However, the vitality of F. polyctena colonies significantly decreased (smaller nest mound volumes). Our study highlights the ecological flexibility of this forest specialist and its potential to survive under extreme conditions.

Global climate change is one of the major threats facing humanity in the 21st century because it contributes to various environmental problems, such as extreme weather conditions (e.g., strong storms and frequent temperature changes) and pest outbreaks [1][2][3]. A cascade of negative effects on various habitats and their biota is expected. For instance, rising temperature allows the trees to skip winter hibernation which makes them more sensitive to unforeseen frost, or snow [3]. Frost-damaged trees are more vulnerable to storms that can cause wind felling, leading to a higher amount of dead wood, which increases the probability of bark beetle (Ips typographus) infestations [1][3]. Between 1950 and 2000, half of the biotic damages (e.g., tree decay caused by insect or fungi infection) were caused by bark beetle infestations in European forests [1]. In addition, bark beetle infestations are expected to increase in the 21st century [2], making bark beetles one of the most dangerous pests of coniferous forests in Europe [4][5].

An increase in bark beetle infestations has led forest managers to introduce “unscheduled salvage” cutting (i.e., immediate clear-cut before the forest reaches its cutting age) to save the undamaged timber [2]. In Hungary, the cutting age for trees in coniferous forests is normally between 50 and 70 years (Decree No. 96/2011. (X. 17.) of the Minister of Rural Development). This has a harmful effect on coniferous forest ecosystems, particularly when most of the trees are removed [6]. Likewise, frequent clear-cutting can inhibit the survival or recolonization of coniferous forest specialists. In addition, deciduous tree species are often planted to prevent further bark beetle infestations, however, this method decreases the proportion of older coniferous forests. Deciduous plantations do not have the same environmental conditions as coniferous forests. Therefore, these management practices do not favor the maintenance of coniferous forest specialists [7]. As a result, many plantation forests are becoming more susceptible to the adverse impact of climate change (e.g., monocultures with trees in lines and in even distances are more vulnerable to heavy storms) and increases in other pest infestations [1][3].

Members of the Formica rufa group (commonly called red wood ants) are very important keystone species and ecosystem engineers of coniferous forests but decades are usually needed to develop large colonies and fulfil this role [8][9][10]. Investigations in Northern Europe have shown that clear-cuttings hinder the colony development of red wood ants and have a profoundly negative effect on their population survival [11][12][13][14]. Clear-cutting makes the habitat for red wood ants unsuitable and also causes or results in habitat fragmentation. The cleared area is often impenetrable for gynes and workers [7][15][16] and isolation can lead to inbreeding [17]. In addition, clear-cutting negatively influence the strategies of ants to properly exploit food sources (tended aphids) [18]. As a result, aphids on remaining trees produce less and lower quality honeydew which finally leads to starvation and suppressed immune response of ant workers [6][10][18][19]. Ultimately, these effects cause a high mortality rate among the nests in the clear-cut areas [10].

Our investigation was performed in the Mátra Mountains (Northern Hungary, 47°49′36.50″ N, 19°58′10.84″ E), at an altitude of 429 m a.s.l., in July of 2017 and 2018. The exposure of the study sites was west to southwest with slopes of 10–15°. We compared the red wood ant nests in three different sites. The first study site was the reference site (RS), a recreational forest covered by a mixed coniferous/deciduous forest with Pinus nigra, Quercus cerris, and Q. petraea, where the age of the trees varied between 2 and 105 years. The second study site was a clear-cut area (Cc), which was once part of a large recreation forest (alongside with our RS) composed of P. nigra, Q. cerris, and Q. petraea. Clear-cutting was done in 2016, because of a bark beetle infestation. The retention trees were mostly Q. cerris and Q. petraea with a few P. nigra (5–10 trees/ha according to the current forestry management practices). Lastly, the third site (Qu hereafter) was a deciduous forest further from the other sites (ca. 6 km by air, Figure 1C) dominated by Q. petraea, Q. cerris, and Carpinus betulus. The trees were between 11 and 116 years old. During the frost period in April 2017, many trees were damaged or uprooted, and serious crown damages were commonly observed on C. betulus.

F. polyctena formed polydomous colonies with interconnected nests in the study area. Different nest abandonment ratios were found in the sites: 45% in the RS, 22% in the Cc, and 11% in the Qu. The nest abandonment ratio in the RS was significantly higher than in the Qu (GLM, t = 2.54 and p < 0.05). In the other two cases, we did not find any significant difference (t < 1.9 and p > 0.05). 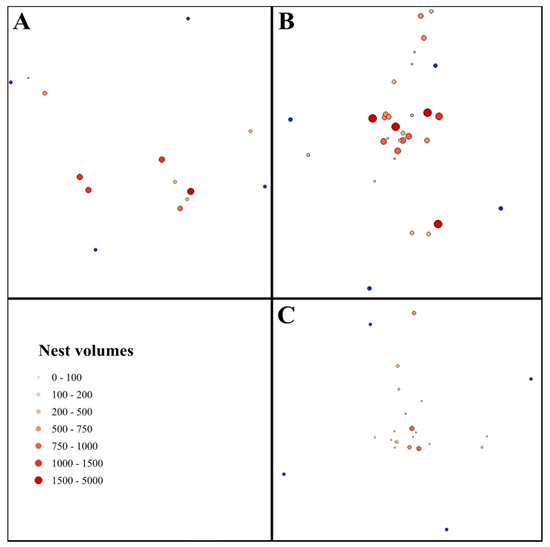 Figure 2. The nest volumes in the studied sites of the Mátra Mountains. (A) The reference site; (B) The clear-cut site; (C) The deciduous site. 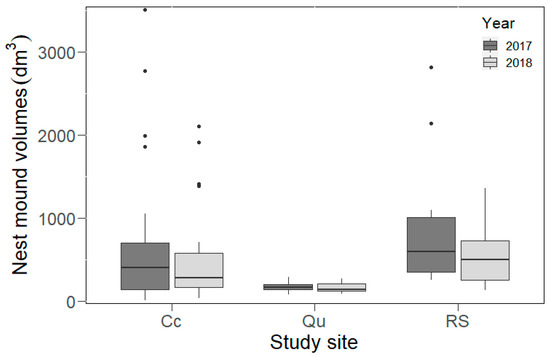 Figure 4. The number (A) and average length (B) of the foraging routes (medians, quartiles, range, and outliers) found in the study sites of the Mátra Mountains. CC: clear-cut site; Qu: deciduous site dominated by Quercus species; RS: reference site.

Our results are consistent with the expected e ects of clear-cutting and the absence of coniferous trees on nest mound volumes and foraging habits of the polydomous red wood ant colony systems. Findings from our study indicated a larger variance in nest mound volumes in the clear-cut area which were characterized by slightly smaller nests as compared with the nests found in the reference site (i.e., mixed coniferous/deciduous forest). Ants in the clear-cut areas used the shortest foraging routes. However, the deciduous forest patch resulted in a very di erent nest structure and foraging habits, having the smallest sized nests and longest foraging routes. This supports our second hypothesis about the e ects of the deciduous forest environment which stated that availability and location of suitable nesting sites could be a stronger determining factor for red wood ants than the distance from food sources that led to longer foraging routes. Altogether, we found polydomous systems with random nest distribution in each plot that could be the result of the spreading strategy of F. polyctena. Polydomous colonies are spread by nest splitting which can lead to the uniform coverage of the territo [23] and are also influenced by the location of appropriate nesting sites. This distribution is in accordance with the findings of Tsikas et al. [24] for F. lugubris in the Rhodope Mountains (Greece). However, since we investigated only one repetition per treatment, the possibilities for generalization of the results should be handled cautiously.

We found a high nest abandonment ratio (45%) in the reference site, which was similar to that found 4–5 years after clear-cutting in Finland [11][12][13]. However, in our case, this pattern could be related to the lack of appropriate insolation and disturbance regimes [25][26][27][28][29]. Our results showed that the nests were situated away from trees with larger girth which could be due to the shading  of the large trees. Thus, there may be a correlation between the distance of foraging routes and the girth of trees. New nests can be established in areas with a sucient amount of sunlight [25][27][28].

In our reference site, appropriate light conditions were found only at the edge of pathways that were kept clear for the tourists, but smaller nests did not tolerate larger disturbances (e.g., high trampling intensity) [26][29]. As a result, new nests could be established only in less visited and trampled areas. In addition, rapid shrub encroachment can also lead to high nest turnover. Nonetheless, old and large colonies can persist under these disturbances, close to the most visited tourist sites, or in overgrown and shaded areas [25][27][28][29]. Abandoned nests were usually close to larger nests, possibly as the result of nest relocations over time (i.e., finding better conditions for the growing colonies). The abandoned nests were still recognizable, presumably due to the slower degradation rate of the pine needles in the nest material.

Although the reference site had the smallest number of nests, it showed considerable variation in nest size distribution and foraging route length. The main reason for this was that the food availability and quality in this plot were close to a preferred habitat of red wood ants with many coniferous trees.

The presence of larger and closer conifer trees support ant populations by providing proper food sources and allow them to visit aphids. In general, the nest volumes did not change significantly between the years, and all the nests were present in both years of the study.