The surface molecular chemistry, such as amine functionality, of biomaterials plays a crucial role in the osteogenic activity of relevant cells and tissues during hard tissue regeneration. Here, we examined the possibilities of creating amine functionalities on the surface of titanium by using the nonthermal atmospheric pressure plasma jet (NTAPPJ) method with humidified ammonia, and the effects on human mesenchymal stem cell (hMSC) were investigated. Titanium samples were subjected to NTAPPJ treatments using nitrogen (N-P), air (A-P), or humidified ammonia (NA-P) as the plasma gas, while control (C-P) samples were not subjected to plasma treatment. After plasma exposure, all treatment groups showed increased hydrophilicity and had more attached cells than the C-P. Among the plasma-treated samples, the A-P and NA-P showed surface oxygen functionalities and exhibited greater cell proliferation than the C-P and N-P. The NA-P additionally showed surface amine-related functionalities and exhibited a higher level of alkaline phosphatase activity and osteocalcin expression than the other samples. The results can be explained by increases in fibronectin absorption and focal adhesion kinase gene expression on the NA-P samples. These findings suggest that NTAPPJ technology with humidified ammonia as a gas source has clinical potential for hard tissue generation. 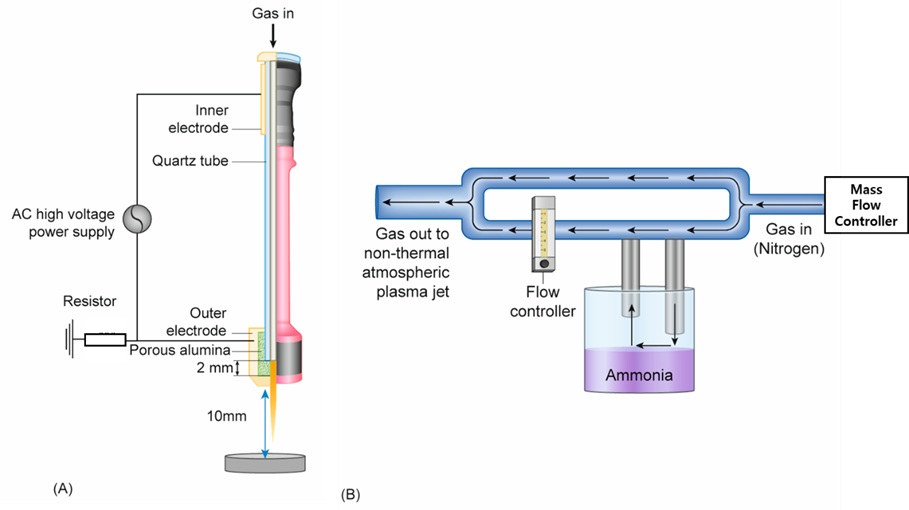 Figure 1. (A) Schematic diagram of the nonthermal atmospheric pressure plasma jet and (B). the design for a customized device that would supply nitrogen mixed with humidified ammonia.

Figure 2. Schematic drawing of the putative mechanism underlying interactions between hMSCs and the (A) C-P, (B) N-P, (C) A-P, and (D) NA-P groups: For the N-P, A-P, and NA-P groups, more cell attachment was observed due to removal of hydrocarbon molecules from C-P. Higher levels of fibronectin absorption were observed on the A-P and NA-P groups, likely due to the presence of oxygen-related functional groups, which enhance osteogenic differentiation. The presence of nitrogen-related functional groups is considered to increase focal adhesion kinase (FAK) gene expression, further enhancing osteogenic differentiation on the NA-P samples.