The main factors contributing to the development of diabetic foot ulcers are peripheral neuropathy (sensory, motor and autonomic) and peripheral arterial disease. Both complications predispose to the development of lesions and the destruction or infection of tissue, which are the precursors to amputations in most cases. Currently, we have a great deal of information on preventive and therapeutic interventions aimed at reducing the sequence of events (foot at risk, injury and subsequent amputation); but other aspects, such as patient mortality and how certain clinical factors, blood glucose control, ulcer evolution and severity influence patient survival, are less well known.

Approximately one in four patients with diabetes will develop a foot ulcer in their lifetime[1]. Seventy percent of diabetic foot ulcers (DFU) remain unhealed after 20 weeks of treatment[2], and 60% of them become infected, and of these, 20% end in different levels of amputation[3].

Patients with DFU have an increased risk of all-cause mortality, which is estimated to be more than double that of patients with diabetes without this complication[4]. On average, a person who develops DFU has a 3–5 year lower survival rate than a counterpart with diabetes, and this effect is in addition to that associated with diabetes itself, for which the reduction in life expectancy is about 6 years[5][6]. Survival is reduced by 40% in 5 years[7][8], although it is further reduced for patients with more severe lesions[9] or with ischemic versus non-ischemic lesions[10].

In this study, almost 60% of the patients died during the follow up, which indicates that survival was reduced to 60% at 5 years (figure 1). Jupiter et al.[7] published a systematic review, which included 12 original studies, finding a 5-year mortality rate of about 40% in patients with a diabetic foot ulcer. However, there are fewer studies investigating longer-term mortality. Morbach et al.[11] and Mader et al.[12] found 10-year mortality rates like those found in our study, 70% and 64%, but Iversen et al. [13] and Jeyaraman et al.[14] reported lower rates, 49% and 45%, respectively. These differences can be explained by the fact that in studies with lower mortality rates, younger subjects, with fewer years of evolution and with less macrovascular disease were included.

Figure 1. Survival analysis of the 338 patients with diabetic foot ulcers (DFU) from their first consultation at the MDFT center. The Kaplan—Meier curve shows the estimated 5-year survival rate.

3. Cardiovascular Disease as a Cause of Death

It is not well understood why these patients have a high mortality rate. Perhaps the most relevant hypothesis is that these patients have different co-morbidities, such as CKD, high rate of micro- and macro-vascular disease, and (especially) the presence of peripheral neuropathy[6]. In this study, we did not find an association between mortality and neuropathy, assessed by loss of protective sensitivity (monofilament or tuning fork), as in the study by Amadou et al.[21]. Perhaps methodological aspects in the assessment of peripheral neuropathy could explain these differences[22]. However, peripheral neuropathy and autonomic cardiovascular neuropathy often coexist in the same patient, a combination that results in increased myocardial ischemia as either silent ischemia or with a poorer adaptive response to ischemic insults[23][24]. The higher frequency of ischemic heart disease as a cause of death among neuropathic versus ischemic patients supports these data[6].

4. Diabetic Foot Ulcer as a Cause of Death

The analysis of the causes of mortality also showed that in 11 patients (5.5%), the lesion was identified as the mortality-triggering factor in the hospital clinical reports, mainly due to sepsis and consecutive multiple organ failure. Morbach et al.[11] reported that up to 5.9% of patients with DFU died from the lesion, without specifying whether the ulcer was the cause of death; while Ghanassia et al.[25] reported that of 19.6% of patients hospitalized for the ulcer, the lesion was the cause of death. However, this outcome is less well-reported and controversial and requires further research; it is important to take it into account in the possible evolution and management of these patients.

Univariate and multivariate analysis (table 2) adjusted to different variables (models 1 and 2) showed that some factors independently predicted mortality in the population with DFU. Most factors, such as age, smoking, ischemic heart disease, cerebrovascular disease, and renal disease, have been documented in previous studies[7][11][13] and are non-controversial, and can be seen in any patient with diabetes. One discordant aspect was the non-association of male sex with mortality in our study, as reported by other authors[15][26], suggesting that in the presence of DFD, the mortality rate is similar in both sexes. Seghieri et al.[26] found even higher mortality in women versus men in non-vascular DFD.

Glycemic control is less well known and of greater practical interest. In our study, tighter glycemic control estimated by HbA1c independently predicted higher mortality (figure 2). Thus, patients with HbA1c < 7% (53 mmol/mol) had a HR of 1.43 (95% CI 1.02–2.0) when multivariate analysis was adjusted to model 2. From a practical perspective, this means that a patient with DFD without ischemic heart disease and HbA1c < 7% (53 mmol/mol) has a similar risk of death as another patient also with DFD, but without ischemic heart disease and a HbA1c value of 8% (64 mmol/mol).

Figure 2. Kaplan—Meier curves for survival by HbA1c in total cohort (n = 334, 4 subjects no data). The log-rank test was obtained from the first 5 years of the survival analysis.

Studies examining this aspect found no association[9][27][28] or found a similar association to our study: increased HbA1c and fewer deaths[8][14][15]. Only the study by Mader et al.[12] found a worse glycemic control association with more mortality. These results, although initially contradictory, agree with what has been published in intervention studies in the diabetic population (T1DM and T2DM) in the scenario of presenting many years of evolution and the great burden of micro- and macro-vascular complications[29]. Aspects such as the increased risk of hypoglycemia in patients with tighter control could explain this higher mortality in patients at high cardiovascular risk[30]. Recently, a secondary analysis of the TECOS Randomized Clinical Trial, supported these data[31]. The aforementioned suggests that in patients with a history of DFU, very tight glycemic control with HbA1c < 7% (53 mmol/mol) is not recommended and that aiming for improved control by reducing HbA1c values is unlikely to reduce mortality in the short-medium term, considering the shorter life expectancy of patients with this chronic complication. An adequate degree of glycemic control—taking account of age, co-morbidity, and life expectancy—is mandatory.

Few studies analyze the association between mortality and severity of ulcers; however, there are more studies that analyze the association with its etiology, increasing mortality among patients with ischemic lesions[10][11][15]. In our series, the SINBAD score system (figure 3) was independently associated with mortality, HR 1.14 (95% CI 1.01–1.27) and HR 1.12 (95% CI 1.02–1.26) adjusted to models 1 and 2, respectively. Winkley et al.[15], using the Texas classification, found no association with mortality; but recently, Brennan et al.[9] using a simple classification, gangrene and osteomyelitis versus early ulcer, as well as Amadou et al. [21], using the PEDIS classification, have reported this association. It should be noted that the classification used by Amadou et al. only considered perfusion. 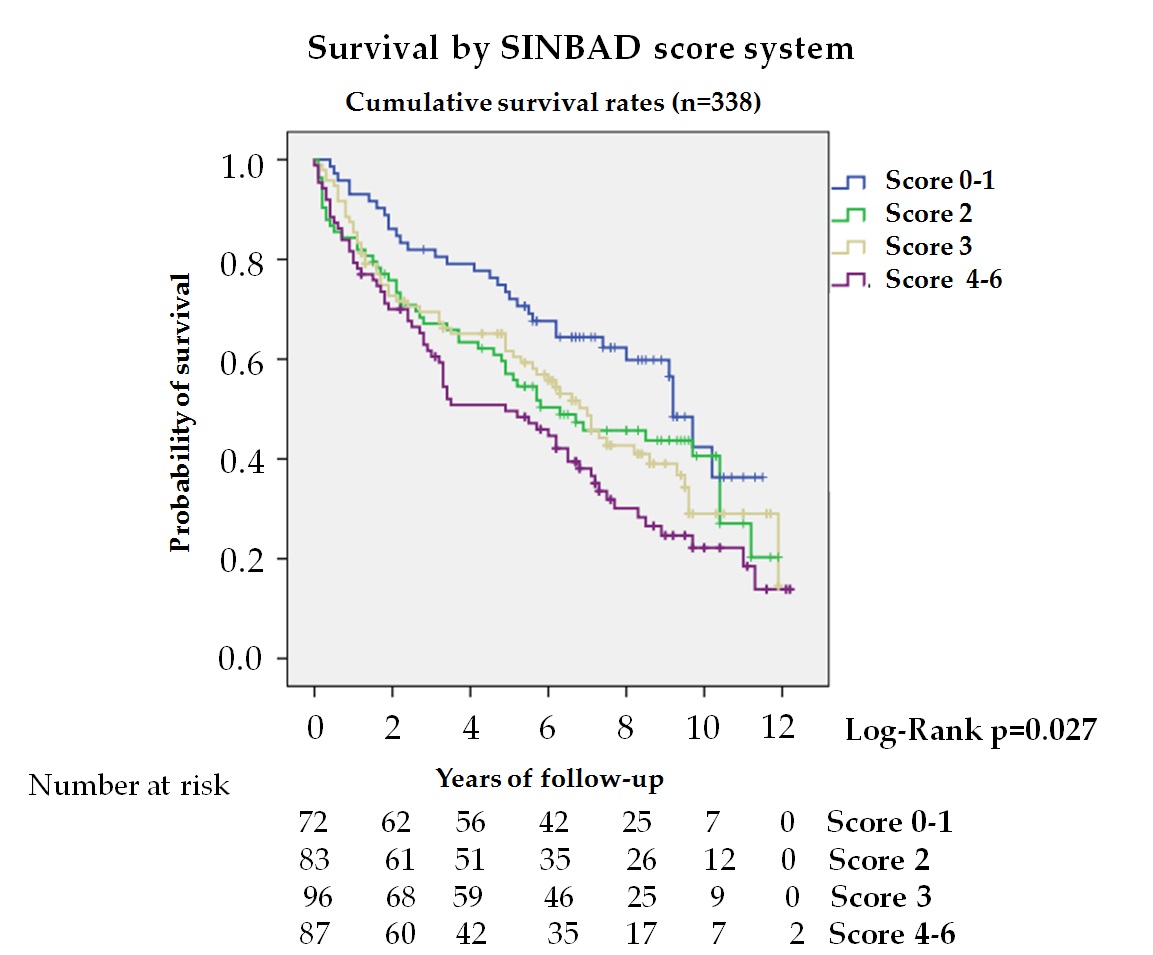 Figure 3. Kaplan—Meier curves for survival by SINBAD score system (n = 338). The log-rank test was obtained from the first 5 years of the survival analysis

The SINBAD score is recommended by the IWGDF for communication among health professionals and includes different prognostic factors of the lesion such as location, perfusion, neuropathy, infection, and depth, allowing a detailed description of the lesion and evaluation of many clinical factors[32]. This study, therefore, demonstrates that the ulcer severity estimated by this classification system is a predictor of death, independent of systemic factors and should be a guide for decisions in day-to-day practice.

In patients with DFU, the presence of chronic limb-threatening ischemia is associated with increased mortality, lower limb amputation, and loss of quality of life[33]. In our series, 22.2% of patients with ischemic lesions received revascularization treatment, observing a longer survival during the first 5 years (figure 4). Analysis during the first 5 years showed a 50% reduction in mortality in the treated group; however, these differences were not maintained when adjusted for other variables. Aspects such as patient selection based on functional status, complex and unfavorable anatomy, and co-morbidity might explain these differences[34].

Figure 4. Kaplan—Meier curves for survival by revascularization in patients with ischemic lesion (n = 167). The log-rank test was obtained from the first 5 years of the survival analysis

Reulceration is common in diabetic patients following DFU[35], but its association with mortality is poorly known. In this study, 43.9% of patients after healing suffered reulceration, with lower mortality, HR 0.58, during the first 5 years in the univariate analysis (figure 5). This reduction was not observed when the entire follow-up period was analyzed, nor did it remain significant after adjusting for different variables, indicating that the association between reulceration and survival depended on age and co-morbidities. Winkley et al.[15] also observed in a series of 229 patients followed for 18 months after their first DFU that patients with reulceration had lower mortality, but the analysis was unadjusted, and no other variables were taken into account. These results could be explained by considering the relationship between activity level and ulceration in patients at risk[35] and that activity level is reduced in patients with greater fragility and co-morbidities[36]. In patients with DFD, where sarcopenia is more common[37], reulceration is a marker of functionality and better health, improving survival. 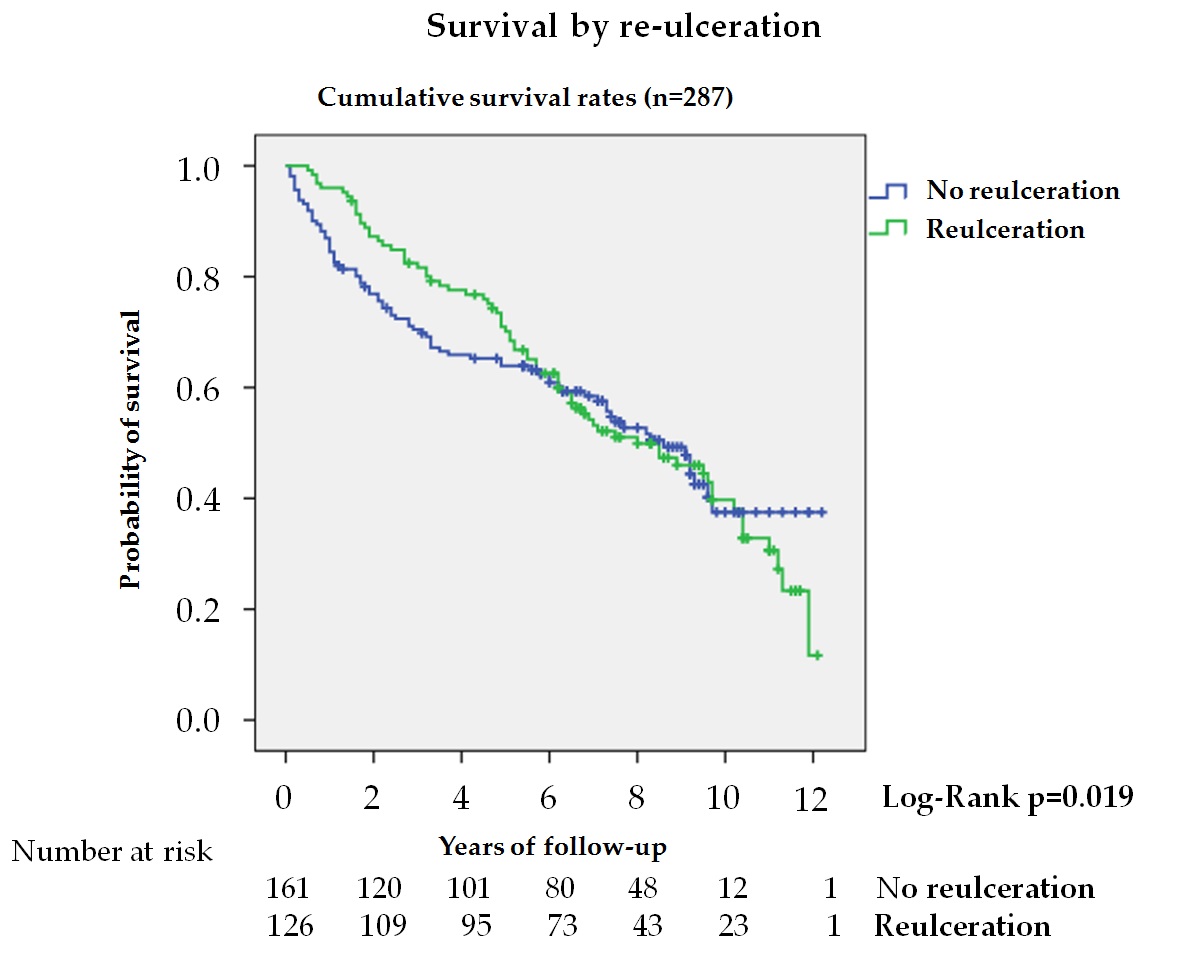 Figure 5. Kaplan—Meier curves for survival by reulceration in patients after the resolution of the DFU and without major amputation (n = 287). The log-rank test was obtained from the first 5 years of the survival analysis

Within the limitations, it should be noted: (i) causes of death were collected from clinical reports and electronic case histories, with no death certificates for those who died outside the hospital setting; (ii) all variable data were obtained at the beginning of the study, but we could not analyze how they changed during the follow-up period; and (iii) we do not have some variables for the analysis of data such as: antiplatelet and lipid-lowering medications and types of oral drugs for the control of hyperglycemia. The main strengths of the study were: (i) real-world clinical practice population; (ii) large sample size and long follow-up time (up to 12.2 years) allowing for medium-long term outcomes; and (iii) the data were obtained from a specially-designed database.

In the present study, patients with a history of diabetic foot ulcers had very limited survival; estimated survival was reduced to 60% at 5 years. The most common cause of death is cardiovascular disease. Within the predictive factors of mortality, besides the well-known factors, such as age, active smoking, cardiovascular disease, and renal disease, we also identified as independent factors of mortality, patients with a HbA1c value < 7% (53 mmol/mol) and those with more severe lesions. Therefore, there is evidence to support the idea that diabetic patients with a history of foot ulcers are at very high cardiovascular risk and should be treated by intensifying control of modifiable risk factors, preferably using drugs with proven reduction of cardiovascular events and deintensifying treatment in order to obtain the best possible glycemic control without significant hypoglycemia. The severity of the lesion should also be regarded as a prognostic marker of mortality.