Regulation of microRNAs in Skeletal-Muscle

Sarcopenia refers to a condition of progressive loss of skeletal muscle mass and function associated with a higher risk of falls and fractures in older adults. Musculoskeletal aging leads to reduced muscle mass and strength, affecting the quality of life in elderly people. In recent years, several studies contributed to improve the knowledge of the pathophysiological alterations that lead to skeletal muscle dysfunction; however, the molecular mechanisms underlying sarcopenia are still not fully understood. Muscle development and homeostasis require a fine gene expression modulation by mechanisms in which microRNAs (miRNAs) play a crucial role. miRNAs modulate key steps of skeletal myogenesis including satellite cells renewal, skeletal muscle plasticity, and regeneration.

Sarcopenia is a pathophysiological process characterized by progressive loss of skeletal muscle mass and function that contributes to a higher risk of falls and fractures among older adults [1]. It often leads to frailty that impacts considerably on the quality of life in elderly people. After the age of 50, the rate of muscle loss is estimated to be 1–2% per year, being faster in men than women [2]. The advances in transcriptomics technologies and high throughput analyses allow for detection of a broad repertoire of cellular factors that participate to gene expression regulation during skeletal muscle aging changes and adaptations such as growth factors, transcription factors, cell signaling pathways activators, and non-coding RNA, including microRNAs (miRNAs) [3].miRNAs are a class of non-coding transcripts specifically involved in negatively modulated gene expression at the post-transcriptional levels by specifically targeting the 3′-untranslated regions (3′-UTR) of their target mRNAs. Several miRNAs have been demonstrated to participate in the molecular mechanisms that control skeletal muscle plasticity during aging. miRNAs that are preferentially expressed in striated muscle are termed as myomiRs, and they act as regulators of muscle development, homeostasis, and functionality [4][5]. Expression of skeletal myomiRs may be altered in old skeletal muscle, in age- and activity-related muscle changes (e.g., hypertrophy, atrophy), as well as in myopathies, such as muscular dystrophy [6][7][8][9]. Recent studies have demonstrated that muscle-specific miRNAs play a pivotal role in the control of sarcopenia, modulating key steps of skeletal myogenesis, including satellite cells senescence, cell proliferation, and differentiation [10][11].The reduction in force of skeletal muscle in older people is primarily due to the loss and weakening of muscle fibers. For instance, during aging, the locomotor skeletal muscles face a marked switch to slow type I myofibers, a process of atrophy of fast (type IIa and IIx) fibers, with a reduction in the myofiber count [12][13][14]. Similar changes have been associated with sedentary lifestyles, and reported in some neuromuscular disorders[6][15][16][17][18]. Thus, exercise is considered an effective intervention to delay the onset and progression of sarcopenia. Regular exercise training has been associated with an increase in skeletal muscle cross-sectional area, force, and resistance to fatigue [19], as well as improvements in cardiovascular fitness and quality of life [20]. Exercise training promotes positive adaptations in skeletal muscle, acting as an important stimulator of extra/intracellular signals, leading to changes in gene expression. Several studies have revealed that miRNA expression in skeletal muscle is modulated in response to physical exercise, see the exhaustive reviews [21][22][23], highlighting the relevance of the miRNAs role in the process of adaptation to exercise. More recently, circulating miRNAs have been investigated as possible biomarkers of exercise training [24].

miRNAs are small non-coding RNAs of 20 nucleotides in length, transcribed by about 2000 human genes, that regulate gene expression at the post-transcriptional level [25][26]. miRNAs play crucial roles in various biological processes such as cell proliferation, apoptosis, differentiation as well as epigenetic changes and metabolic homeostasis. miRNA genes are often found in clusters and may derive from intragenic or intergenic regions, both intronic and exonic [27]. miRNAs biogenesis begins with the synthesis of primary miRNAs (pri-miRNAs) by RNA polymerase II that are processed in the nucleus into precursor miRNAs of approximately 70 nt (pre-miRNAs) by a complex consisting of the RNA binding protein, DGCR8 microprocessor subunit, and the endoribonuclease, Drosha [28]. Pre-miRNAs are then exported to the cytoplasm via the nuclear transport protein Exportin 5, where the endoribonuclease Dicer cuts the stem loop region producing miRNAs duplexes. miRNAs duplexes harbor the mature miRNA strand that, once associated with the RNA induced silencing (RISC) complex, works as a gene modulator at the transcriptional level.miRNAs regulate transcripts expression generally by annealing to the 3′ untranslated region (3′UTR), leading to inhibition of mRNA translation and/or degradation of mRNA transcripts. miRNA may target mRNA not only at their 3′-UTR, but also at the 5′UTR, promoters and exon sequences, generally leading to downregulation of the expressed genes [29]. Each miRNA can target several mRNAs involved in different cell functions and in a crosstalk between cell signaling pathways. Deregulation of miRNA expression has been associated with several pathological processes, including cancer, neurodegenerative diseases, cardiovascular diseases, and host response to viral infections [30][31][32][33].

4.  The Role of miRNAs during Skeletal Myogenesis in Adults

MRFs expression can be regulated by miRNAs highlighting their involvement in modulating myogenesis. A set of miRNAs, referred to as myomiRs, such as miR-1, miR-133a, miR-133b, miR-206, miR-208, miR-208b, miR-486, and miR-499, are highly enriched in muscle fibers [18]. MyomiRs may modulate size and type transition of muscle fibers in structural adaptation to aging and exercise. Specifically, miR-499, miR-208 and miR-208b, encoded by intron sequences of myosin heavy chain genes, have been demonstrated in mice models to participate in a network of miRNAs that regulate not only myosin expression, but also fiber type genes expression and muscle performance [36]. Skeletal muscle-specific Dicer knockout in mice results in low expression of specific miRNAs, reduced skeletal muscle mass, and abnormal myofibers morphology, confirming that a correct maturation of miRNAs is necessary for muscle development and function [37]. In adult mice, depletion of Dicer has been demonstrated to reduce the expression of miR-1, miR-133a and miR-206 expression; however, this reduction had no effect on skeletal muscle mass and phenotype, even after a long-life reduction [38]. In contrast, the reduction of myomiRs after Dicer knockout affects skeletal muscle regeneration [39]. Unexpected results derived by Dicer depletion studies in adult mice skeletal muscle showed that, even if Dicer expression might be reduced of almost 80%, myomiRs expression was not as much significantly reduced. This finding opens interest for further studies that may investigate the effectiveness of Dicer function and myomiRs stability and function in adult muscle. Several reviews have extensively described the role of miRNAs during embryonal skeletal myogenesis [22][23][40]. Here we report and discuss the most recent evidence concerning miRNA regulatory network in adults. A selected list of myomiRs and miRNAs implicated in the different phases of skeletal myogenesis from quiescence to the proliferation of satellite cells and myofibers differentiation are represented in Figure 1.

5.  Role of miRNAs in Skeletal Muscle Aging and Sarcopenia

Several studies have demonstrated that miRNAs are implicated in the alteration of skeletal muscle homeostasis and function during aging. Comparative studies in young and old muscle tissues of rodents, monkeys and humans showed differential expression of several miRNAs involved in the control of the myogenic processes [41][42][43]. The differentially expressed miRNA during aging, target factors that regulate cell cycle progression, the insulin-like growth factors (IGFs), factors involved in the process of cell senescence such as SIRT1 and telomerase reverse transcriptase (TERT), and factors of the transforming growth factor-β (TGF-β) cell signaling pathways (Figure 2). 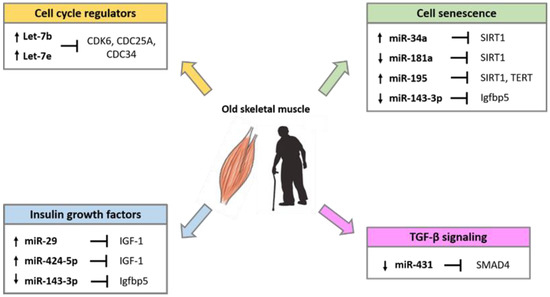 Figure 2. miRNAs involved in the regulation of age-related pathways in skeletal muscle.

6.  miRNAs Are Regulated by Exercise in Sarcopenia

Skeletal muscle exhibits an extraordinary plasticity dictated by a fine balance between anabolic and catabolic processes [16]. Muscle composition is influenced by internal and external stimuli (e.g., the intrinsic cellular aging process or environmental factors) that can accelerate or temporize the functional muscle impairment associated with aging and the sedentary behavior [5][6][44]. Indeed, aging is associated with a decrease in muscle protein synthesis [45], mitochondrial dysfunction, as well as a loss of fast glycolytic fibers and reduced blood perfusion [46][47][48]. Therefore, older people show a characteristic weakening, deterioration, and muscle loss, accompanied by microvascular impaired perfusion and an underlying state of inflammation [49][50]. This turnover is detrimental for healthy aging but is partially reversible with physical activity [51][52]. To date, lifestyle interventions and exercise training represent the primary, most effective, and non-pharmacological approach to prevent and treat sarcopenia-related decline. Exercise is prescribed with different approaches, including customized type, frequency, intensity, and duration, to endorse positive outcomes. The most common and studied models of exercise can be distinguished in endurance and resistance: the latter is characterized by low intensity, long-duration aerobic activity, the former by higher intensities, short bouts with primary involvement of the anaerobic pathways. Endurance training is mainly known for its positive effects on the cardiovascular fitness (i.e., maximal oxygen consumption), but it also induces mitochondrial biogenesis, increases oxidative enzyme activity with a reduction in ROS generation, promotes muscle vascularization and regulates vascular tone [53][54]. The changes in muscle metabolism enhance the all-body aerobic fitness capacity (peak VO2 uptake) and attenuate the age-associated decline in the peripheral and central vasculature and cardiac functions [55][56]. Considering that the main feature of aging and sarcopenia is muscle atrophy, resistance exercise training is the most indicated, as it elicits the biosynthesis of contractile and structural proteins, resulting in muscle hypertrophy [57]. Specifically, resistance training significantly increases the number and cross-sectional area of type II fibers [53][54]. This improvement in muscle fibers results in a general improvement in functional capacity, muscular endurance, and quality of life [10]. miRNA expression may be adapted in response to exercise and altered miRNA profile may contribute to affect the plasticity of aged muscle [58][59]. Understanding the signaling pathways regulated by these miRNAs allows to shed light on the molecular mechanisms associated to improved muscle anatomy and function and may help establish specific protocols of training.

Sarcopenia-related muscle dysfunction significantly affects life quality of elderly people. Skeletal muscle development, homeostasis, and metabolism during aging undergo changes in terms of gene expression regulation in which miRNAs have been demonstrated to play a crucial role. With aging, the altered expression profile of miRNAs that regulate the central processes of muscle cell biology contributes to the loss of muscle mass. Further studies on the molecular mechanisms of regulation of miRNAs during the multiple steps of skeletal myogenesis, as well as in sarcopenic/atrophy conditions will shed light to our knowledge on the functionality of skeletal muscle and on the identification of potential targets for therapies.