Hybrid EWPF has been experimentally investigated for both sandstone and carbonate reservoirs by various researchers. The idea behind hybrid EWPF is to enhance oil recovery by the combined effect of optimized injection water composition and polymer flooding. Most of the studies have shown the synergistic benefits of the hybrid method in terms of two- to four-fold decreases in the polymer adsorption, leading to 30–50% reductions in polymer consumption, making the project economically viable for carbonates. EWPF has resulted in 20–30% extra oil recovery in various carbonate coreflood experiments compared to high-salinity water flooding.

60% of oil reserves globally are concentrated in carbonate reservoirs[1]. However, due to the presence of organic and polar acidic compounds in crude oil, the majority of carbonate reservoirs tend to be oil-wet[2][3][4]. This results in higher residual oil saturations in carbonates, even after water flooding. During the primary recovery phase, only 10–15% of oil originally in place (OOIP) is recovered. Secondary recovery using water or gas injection can further extract 10–30% of the remaining oil. However, almost 40–60% of oil remains trapped and inaccessible, even after secondary recovery. Various enhanced oil recovery (EOR) practices are in use to recover the trapped oil volume, such as polymer flooding (PF), surfactant EOR, miscible gas injection, and steam injection. Each EOR method modifies the rock–fluid interaction (oil–water–rock, OWR) properties in a certain manner, resulting in improved recovery. For example, polymer flooding increases the displacing fluid viscosity, resulting in a favorable mobility ratio, whereas surfactant EOR causes reductions in the oil–water interfacial tension (IFT) and residual oil saturation (Sor)[5].

Engineered water flooding (EWF) is a relatively new EOR technique, which involves the injection of properly designed low-salinity water (LSW), disturbing the original equilibrium state of the OWR system, resulting in incremental oil recovery, which is mainly caused by the wettability modification. Additional oil recovery resulting from EWF in sandstone was first documented in 1967[6]. In 2004, the first ever field application of EWF in sandstone as an EOR technique was published. The idea of EWF as a potential EOR process in carbonates was triggered first in the 1980s, when exceptionally high oil recovery rates were observed from the injection of seawater into fractured chalk formations under the North Sea[7][8][9]. Engineered water for use in carbonates is designed by tuning the injected water salinity, ionic strength, and the concentrations of potential determining ions (PDIs) Ca2+, Mg2+, and SO42−. EWF also has some inherent limitations, such as viscous fingering due to unfavorable mobility ratios, oil trapping, and fines migration[10]. Hence, this method may not qualify as an optimum EOR option under certain conditions, even though it is a low-cost technique.

The development and implementation of novel, cost-effective EOR methods is critical for the sustainable growth of the oil industry. Research is underway on various levels to develop economically viable hybrid EOR methods and overcome the limitations of individual methods, such as hybrid engineered water–polymer flooding (EWPF) or surfactant flooding. The idea behind hybrid EWPF is to enhance oil recovery via the combined effects of optimization of the injection water composition and PF, mainly through two mechanisms. (1) Engineered water modifies the wetting characteristics of the rock surface due to the salinity and composition differences, which affects the bonding of the crude oil polar components (carboxylic material, -COOH group) with the carbonate surface and helps in oil detachment[11][12][13]. (2) Polymer flooding improves the macroscopic sweep efficiency by decreasing the mobility ratio[14]. In addition, EW promotes polymer stability and a reduction in the polymer concentration requirement, making PF applicable to high-salinity, high-temperature carbonate formations[15]. Hence, the hybrid method results in greater incremental oil recovery than that obtained by standalone methods.

Literature and field case studies have proven that the synergistic combination of two or more EOR techniques provides better results in terms of oil recovery and economics. For instance, the combined use of an alkali, surfactant, and polymer in the alkaline–surfactant–polymer (ASP) flooding technique results in enhanced macroscopic and microscopic sweep efficiencies, owing to the favorable mobility ratio of the polymer, the microscopic sweep efficiency due to pH change caused by alkali, and the reduction in IFT caused by surfactants [16][17]. Any EOR method involving two or more EOR techniques is known as a hybrid EOR method. Much research is being carried out in the field of hybrid EOR, particularly aiming to increase the applicability of chemical methods. As discussed in previous sections, both PF and EWF have associated challenges that limit their field-scale applications. In order to overcome these limitations and take advantage of the synergetic effects of the two methods, the hybrid EWPF technology comes into play. The hybrid process can be simply represented as:

Various experiment-based and modeling studies have been carried out in recent years to prove the effectiveness of hybrid EWPF as an EOR method[31][32][33][34][35][36][37]. These studies have shown an average of 11% incremental oil recovery using the hybrid method in different carbonate formations (Figure 1).

The limited literature on the application of EWPF EOR in carbonates shows that it can increase oil recovery by equal to or more than the sum of the recovery from each process. Rivet[38] and Seright et al. [39]studied the combined effects of EWPF in terms of the better polymer stability and yield, improved microscopic and macroscopic sweep efficiency, and reduction in chemical costs. A seawater desalination process was developed for combined EWPF applications in an offshore field[40]. EW hybrid methods can achieve up to 30% of OOIP incremental recovery[41]. 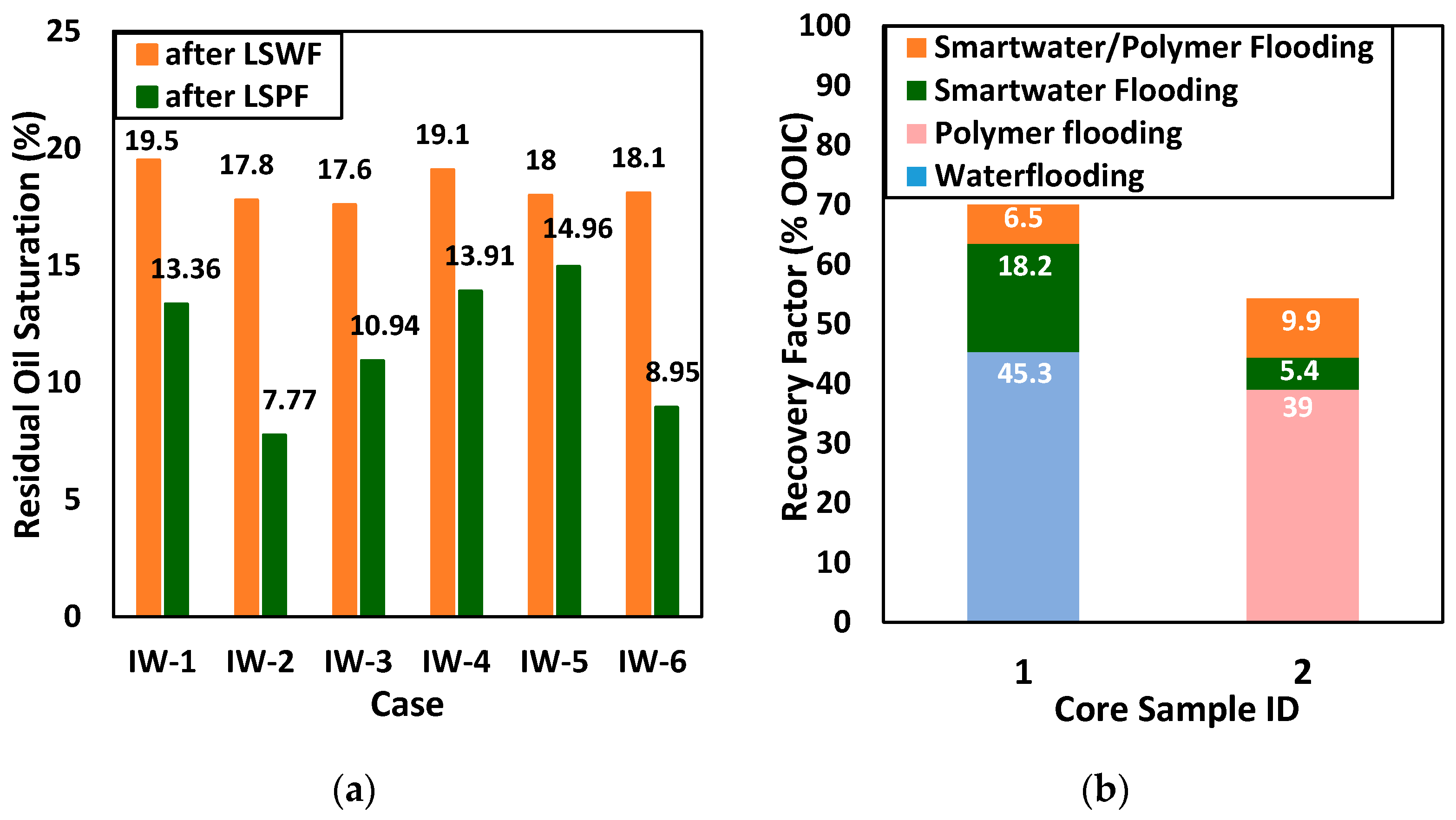 Figure 2. (a) Reduction in Sor after LSPF[37] (b) additional recovery using EWPF in carbonate reservoir cores[42].

Incremental oil recovery resulting from the synergy between smart water (SW) and polymer in carbonates was also confirmed by AlSofi et al.[42]. Hybrid EWPF resulted in 6–10% OOIP recovery after PF, showing that LSW modifies fluid–rock interactions, creating a moveable oil volume that is displaced easily by the polymer in EWPF (Figure 2b). Similarly, Vermolen et al.[20] conducted oil displacement experiments on reservoir cores, resulting in ~45% incremental oil recovery using LSPF. An incremental OOIP recovery value of 8% was achieved by further reducing the salinity of the water, confirming the synergistic effect of the hybrid process.