Overall equipment effectiveness (OEE) is a key performance indicator used to measure equipment productivity. The purpose of this study is to review and analyze the evolution of OEE, present modifications made over the original model and identify future development areas.

Overall equipment effectiveness (OEE) is a KPI introduced by Nakajima (1988)[1]; this metric was developed as part of the total productive maintenance (TPM) to measure the equipment productivity in a manufacturing system. OEE is a productivity ratio between real manufacturing and what could be ideally manufactured[2]. This indicator is widely accepted as a tool by some companies, e.g., when implementing lean manufacturing[3] or maintenance programs[1] to monitor the actual performance of an equipment. OEE identifies six big losses comprising aspects of availability, performance and quality that reduce the equipment effectiveness. Dunn (2015)[4] defined those three aspects as follows: (i) availability—‘Is the machine running or not?’; (ii) performance—‘How fast is the machine running?’; and (iii) quality—‘How many products satisfied the requirements?’.

Availability measures downtime losses due to breakdowns or setup/adjustments; performance measures speed losses due to minor stoppages and reduced speed; and quality measures defect losses due to process defects or reduced yield[5]. Over time, OEE applications have been modified depending on industry needs; some authors have slightly modified the original formula, whereas others have proposed new formulas.

The insufficiency of OEE as an indicator has resulted in its modification[6]. Many industries have customized it to fit to their particular requirements[7]. Based on the OEE structure, models have been developed for domains such as sustainability[8], line manufacturing[9][10], assets[6], resources[11], transport[12][13] and ports[14].

2. The Focus of the Current Research Effort in the OEE Domain

The bibliometrix R-package was used to analyze the 186 articles from the two electronic databases. This packaged, which is written in the R language, provides a set of tools for quantitative studies in bibliometrics and scientometrics[15]. Using this program, the data extracted from WoS and Scopus were consolidated to perform a comprehensive bibliometrics analysis of the current research effort pertaining to OEE. Table 1 shows a general data summary from the 186 articles.

Figure 1. Basic data analysis of (a) number of articles per year and (b) Top 10 journals.

The total number of journals published regarding OEE was 102. Journals pertaining primarily to manufacturing or maintenance issues were not the only ones that focused on the OEE indicator. Evidence shows that an increasing number of journals are focusing on sustainability, business, logistics, mining, etc.

The current effort to spread the topic based on contributor and geographical location is shown in Figure 2. Europe is the continent with the most publications (45%) followed by Asia (26%), America (7%) and Africa (5%), as shown in Figure 2a. Figure 2b presents the top 10 countries in terms of single country publication (SCP) and multiple country publication (MCP). More than 80% of the publications were written by authors belonging to the same country; all the scientific productions in India were based entirely on SCPs, unlike the UK and Spain, who collaborative with other countries. Figure 2c indicate the top 10 most productive authors, including the number of articles (N articles) and total citations per year (TC per year). Greek author Panagiotis Tsarouhas was the first in the top 10, with 83.33% of his publications reporting cases in which OEE was applied to different production industries, e.g., croissant production lines[16], ice cream production lines[17] and production plants of Italian cheese[18] to identify potential opportunities for improving production systems. Braglia and Huang published four articles, whereas the other authors from the top 10 published three articles each. Some of them have developed new models based on OEE, whereas others have applied the indicator in different industries to measure equipment, process or resource effectiveness.

Figure 2. The effort in terms of (a) geographical location (b) top 10 country production and (c) authors contribution over the time.

Three inclusion criteria were used for the analysis in this study. (a) Criteria I1—include papers that are literature reviews and/or are related specifically to OEE and its application; (b) Criteria I2—studies that mention OEE-based models; (c) Criteria I3—papers that only use the OEE to verify an improvement or change in any process (Table 2). Approximately 20% of the articles contributed scientifically to the modification or new development of models based on the original OEE (Figure 3). Instead of for use in production, the new models were built to measure the effectiveness in areas such as transportation, sustainability, mining, electricity and resources (human and monetary). 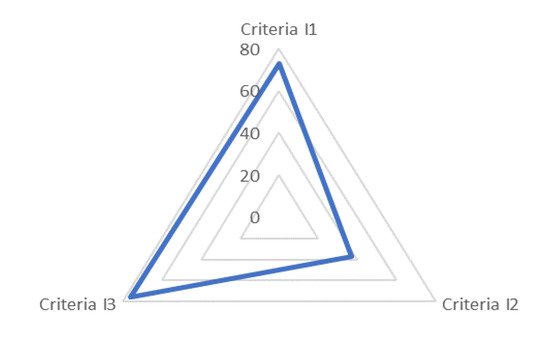 Two types of keywords are shown in Table 2: the author’s keywords and keywords plus. The former is provided by the original authors, whereas the latter is extracted from titles of cited references by Clarivate Analytics (WoS). Figure 4 shows the co-occurrence network of the author’s keywords; the number of nodes in the network was 40 and was related through association; the clustering algorithm used was Louvain. The network comprised four clusters. The first one comprised nine keywords related to the OEE formulation, availability, performance, quality, downtime, speed loss, etc. The second cluster comprised 12 keywords related to total productive maintenance, optimization, production, maintenance and autonomous maintenance. The third cluster comprised terms such as effectiveness, throughput and performance measurement. The last cluster comprised 13 keywords pertaining to current issues, such as Industry 4.0, simulation, lean manufacturing, six sigma, SMED and DMAIC.

Initially, studies regarding OEE are associated with total productive maintenance; subsequently, they are associated with the industry, availability and manufacturing process. Currently, they are related with terms such as lean manufacturing, improvement, implementation, reliability, design and optimization. The most cited document obtained from the systematic review considers quality assessments, such as lean tools and six sigma, to improve productivity and financial savings, e.g., in the die-casting unit of a company[96].

3. The Developed Models based on OEE

Over time, industries have adapted OEE to their needs. Hence, several authors have developed slight modifications to Nakajima’s model whereas others have developed new indicators based on the originally formulated OEE.

A list of models based on OEE, listed by the author and model name, is shown in Table 3. A brief description of each model is provided as well.

As presented above, the OEE was modified to solve gaps in various issues, such as sustainability, human factor, transport, manufacturing system, mining, cost, port and resources.

4. The Principal Contributions in OEE and Its Future Trends

Initially, OEE was used in production, in particular for TPM, which assists in identifying the overall equipment performance in a manufacturing process[190]. To accommodate industry needs, some researchers began to analyze the productivity of manufacturing line systems[2][9] or factories[165]. Currently, OEE is used with continuous improvement methodologies, such as lean manufacturing to increase productivity by eliminating waste[191]. It is also used as a KPI and data collection tool to measure the effectivity and process capability of new six sigma implementations[52]. Following the methodology of continuous improvement, Braglia et al. (2019)[3] developed a new metric based on OEE, known as overall task effectiveness. This new indicator supports lean and six sigma methodologies to identify, analyze and evaluate losses that occur during manual assembly activities.

Sustainability is an aspect that has been investigated by several companies in recent years[192], which shows that concerns regarding the environment have been growing. Hence, it has become increasingly important to include this variable as a criterion in business decision-making. Ghafoorpoor Yazdi et al. (2018)[141] created a design in a study based on OEE and its relationship with sustainability in Industry 4.0. Meanwhile, other authors incorporated the concept of sustainability in OEE, e.g., Domingo et al. (2015)[8] developed the overall environmental equipment effectiveness to identify and measure losses due to sustainability. Likewise, Durán et al. (2018)[182] designed the Sustainable Overall throughput effectiveness indicator to measure the operating performance and factory level sustainability.

The OEE has been adapted for the transport sector. To the best of our knowledge, it first occurred in the mining industry[12] and was used to identify possible losses in the availability, performance and quality of equipment such as shovels and trucks. In recent years, the efficiency framework in the port terminal[14] that considers manageable and unmanageable variables has been studied to create indicators based on OEE. Additionally, the OEE has been adapted to road transportation[13] based on distance, load capacity, route time, stops and services. Furthermore, it has been used to evaluate the effectiveness of urban freight transportation[7] as well as optimize availability, performance and quality metrics.

Accordingly, some authors have established interesting frameworks that can be developed in future studies. Some of them proposed future studies based on the frameworks that they have developed thus far, whereas others developed innovations in new areas. Abdelbar et al. (2019)[184] used a new OEE formula to identify and implement process improvements. Braglia et al. (2018)[181] extended the proposed methodology, including the analysis of material losses based on the finished product. Ghafoorpoor Yazdi et al. (2018)[141] proposed re-performing experiments for long time periods and as a case study in the manufacturing industry. Dadashnejad and Valmohammadi, (2019)[67] applied the same value stream mapping technique that is used to identify improvements in other factories.

By contrast, other authors proposed different areas in which OEE is applicable. In the study by García-Arca et al. (2018)[13] where OEE was adapted to transport management, they assume that the same methodology is applicable to the service sector and other logistics processes, such as goods reception or performing selection in a warehouse. Sharma et al. (2018)[128] and Supriyanto and Mokh (2018)[50] reported that their studies can be replicated in the service sector as well as in other industries, such as pharmaceutical, electrical/electronic, textile and transportation (rail and air travel).