Goal-directed navigation is a crucial behavior for the survival of animals, especially for the birds having extraordinary spatial navigation ability. In neural mechanism of the goal-directed behavior, especially involving the information encoding mechanism of the route, the hippocampus (Hp), nidopallium caudalle (NCL) and their local networks of the avian brain play important roles.

Goal-directed behavior relies on learning the relationship between situations, actions, and their outcomes. As a kind of typical spatial navigation behavior, goal-directed navigation is closely related to the migration, foraging, and homing of the animals, in which the important information in the environment is perceived to support the complex decision-making. Therefore, it is essential for individual survival. In this complex behavior, the brain mechanisms of the basic functions of environmental perception and behavioral decision have been widely studied. In 1948, Tolman put forward the hypothesis of “cognitive map” based on a series of behavioral studies, which suggested that animals can form flexible internal representations of spatial relationships in the environment [1]. After that, the discoveries of a series of spatial navigation function related neurons including place cell, grid cell, head-direction cell, boundary cell, and speed cell have provided more and more neural evidence for this hypothesis, improving our understanding of the brain mechanism of spatial navigation.

The motion path from the current place to the goal place is called the route. Routing execution involves the planning and adjustment of the path, which is one of the most important tasks in goal-directed navigation. According to the current leading research, the hippocampus (Hp) region of the brain correlates with the maintenance of memories and decision making in the spatial navigation. However, we can still conclude that a single brain region (like Hp) is insufficient to finish this complex task independently, just like any other neural processes. A large number of studies show that spatial navigation relies on a local network including multiple brain regions with strong interactions among them. The animals in the navigation process need to estimate the direction and distance of the destination based on the internal metric of space according to the cognitive map constructed in the brain to plan the next action, which requires the Hp to interact with the action-planning systems in other brain regions. This also implies that the route planning in the navigation may involve a widely distributed structural network, in which other spatially-related regions may act as processing nodes. Prefrontal cortex (PFC) is an example, which plays an important role in adaptability, flexible behavior, and executive function. In the brain of the bird, the corresponding analogous brain region is the nidopallium caudolaterale (NCL), which is compared to the avian “prefrontal cortex”[2].

Existing studies have shown that both Hp and NCL cells of birds are significantly correlated to their learning and cognitive functions. The rhythm and functional network analyses of the Hp and NCL activities in the studies on the encoding mechanism of pigeon’s goal-directed behavior have shown that both of them participate in the related information encoding, confirming their important roles in goal-directed behavior. The researchers believe that Hp of pigeons focuses on the encoding of the current location and goal location, while NCL focuses on the encoding of routing information related to goal-directed behavioral decision-making. They further hypothesize that Hp and NCL of pigeons have a cooperative relationship in goal-directed decision-making tasks since they encode the involved different information. There is no final conclusion about the connection between the avian Hp and NCL now. However, most studies believe that there is a rare direct link between avian NCL and Hp, and clear and solid evidence for the transfer of information from the Hp to the NCL or other extrahippocampal regions is lacking, which makes Hp-NCL network very different from the Hp-PFC network in mammals. A recent study recorded the LFP signals of Hp and NCL respectively when pigeons performed goal-directed decision-making tasks and analyzed the functional causal relationship between them [3]. The results of amplitude–amplitude coupling and LFP functional network analysis shown that there were exactly significant causal functional interactions between Hp and NCL, verifying the above hypothesize. Further results of partial directed coherence analysis show that the predominant direction of information flows is from Hp to NCL, laying a foundation for the future research of avian Hp-NCL interactions in goal-directed navigational behavior. We concluded the representative developments on the role of the avian Hp, NCL, and Hp-NCL network in goal-directed navigation route information encoding in Figure 1.

After years of research, it is now known that both the avian Hp responsible for spatial perception and internal representation and the NCL responsible for multisensory perceptual integration and behavioral response play important roles in the navigation process. We have more reasons to believe that the realization of this complex behavior must require the cooperation of multiple brain regions including the two. Figure 2 shows the navigation process of a bird with its nest as the goal, in which its Hp and NCL perform different functions by encoding different information in goal-directed navigation and support route planning and adjustment through coordinated interactions. In this process, Hp is mainly responsible for the spatial perception of the environment and the corresponding internal representation in the brain, focusing on the encoding of the current location, goal location, and the geometric characteristics of the environment. While NCL is mainly responsible for linking multisensory perceptual integration with a behavioral response to provide a necessary supplement for the information encoding in Hp, focusing on the encoding of routing information and behavioral choice. As far as the coordinated interactions between them in the goal-directed navigation are concerned, the existing information related to spatial cognition and navigation is perceived and first stored in Hp, and then transmitted to NCL after preliminary processing and encoding. In NCL, these existing information and goal-related information are further integrated, and the next traveling direction will be made after weighing. The reprocessed goal and decision-related information may be transmitted to Hp again to activate the neural activities for further routing information encoding, guiding the goal-directed navigation. 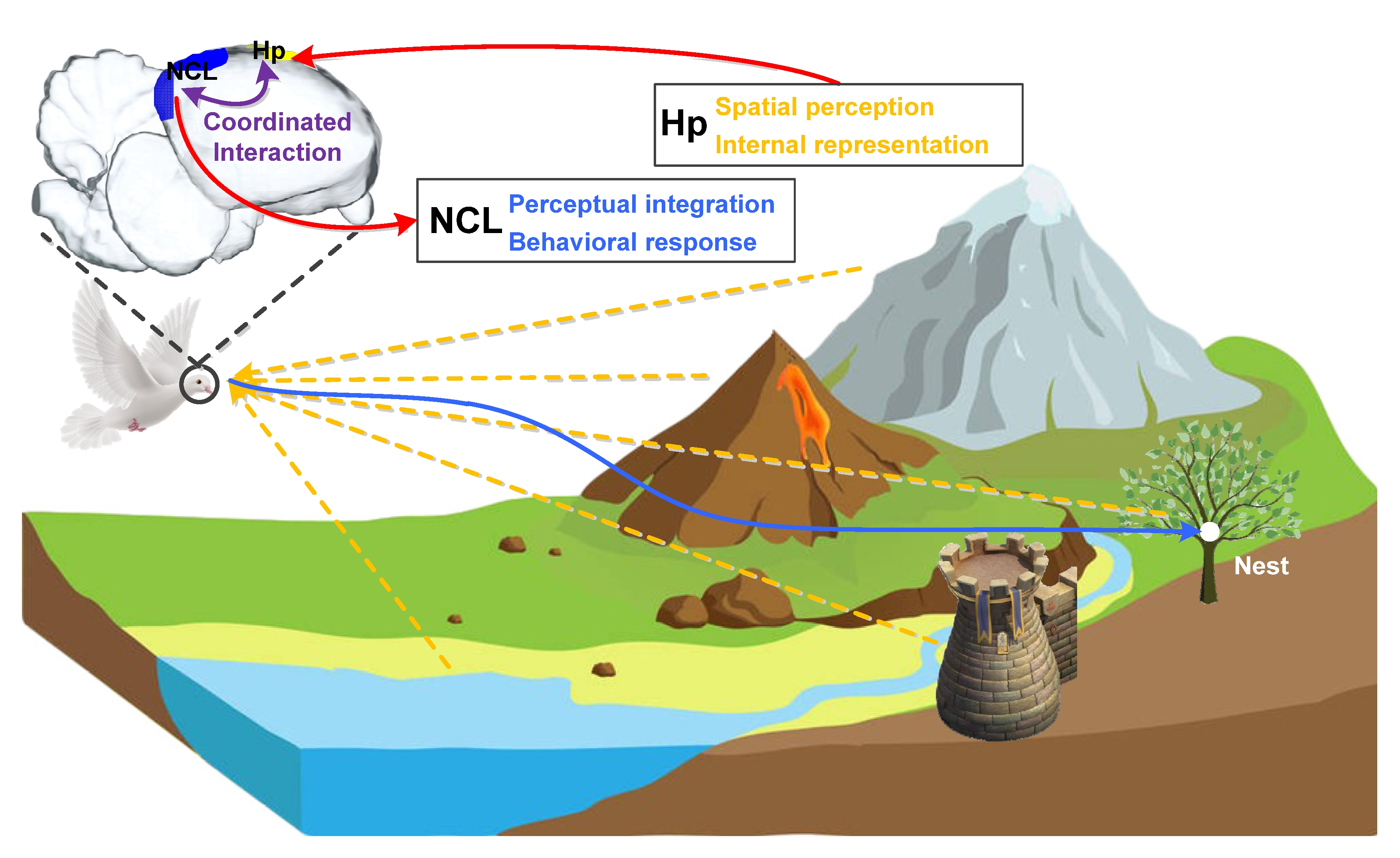 Although the current studies have provided us with a preliminary blueprint of avian goal-directed routing information encoding, many fascinating questions remain unanswered. The nine questions in Table 1 are a summary of the most important mechanistic questions that arose from preparing this review (the order does not indicate relative importance). To answer them, long-term collaborative efforts combining multidisciplinary approaches from neuroscience, biophysics, biochemistry, ethology, and genetics will be required. There is a long way to go but the future can be expected. We should work together to witness these exciting times in the field.