The New Space Economy encourages constellations of satellites that are being proposed in large numbers by private companies. They will provide communication, enable global monitoring of Earth, and enhance space observation. Mostly enabled by technology miniaturization, satellite constellations require a coordinated effort to face the technological limits in spacecraft operations and space traffic. In this Topic Review, we provide a survey of the upcoming satellite constellations and an overview of future challenges to be faced.

The idea of a constellation of satellites appeared in the market about twenty years ago with Iridium and Globalstar as pioneering examples. They offered worldwide communication links competing with the terrestrial cellular network, having, however, limited success due to service costs mainly [1,2]. We can now say that at that time the business model was not sustainable due to the small market and high initial and maintenance costs.

Access to space is now broadening thanks to technology miniaturization and design experience. With a tremendous forecasted increase in the launch rate for small satellites (from pico-sized to mini-sized) [3], constellations are getting attention again from sustainable businesses [4].

In the rapidly emerging business of satellite constellations, it is important to track and update the information about players and trends to guide future developments.

There have been few attempts to propose large satellite constellations for commercial purposes in the past few decades (from ca. the late-90s to 2015). Among them were the companies ViaSat, Boeing, Samsung, Yaliny [9], Globalstar [10] and Iridium [11]. In all cases, the target application was in the communication field, aimed at providing global connectivity with different strategies: medium Earth orbit (MEO) or low Earth orbit (LEO) constellations, and large or small numbers of satellites. All of them have been delayed [12], restyled [13] or have failed [14]. These proposals are included anyway in the upcoming statistical analysis, for possibly being part of future or current space traffic. Non-commercial constellations for Global Navigation Satellite System (GNSS) purposes, namely, the GPS, GLONASS, Galileo and BeiDou are included as well. Constellations in GEO orbit, such as IRNSS, are instead left out of the statistics.

In the last few years, the proposals of satellite constellations have experienced a tremendous increase with more than one hundred companies trying to succeed in different markets with different approaches. At the time of writing, more than 90 companies or agencies (other than older attempts, some of which are mentioned above) have been found proposing satellite constellations. 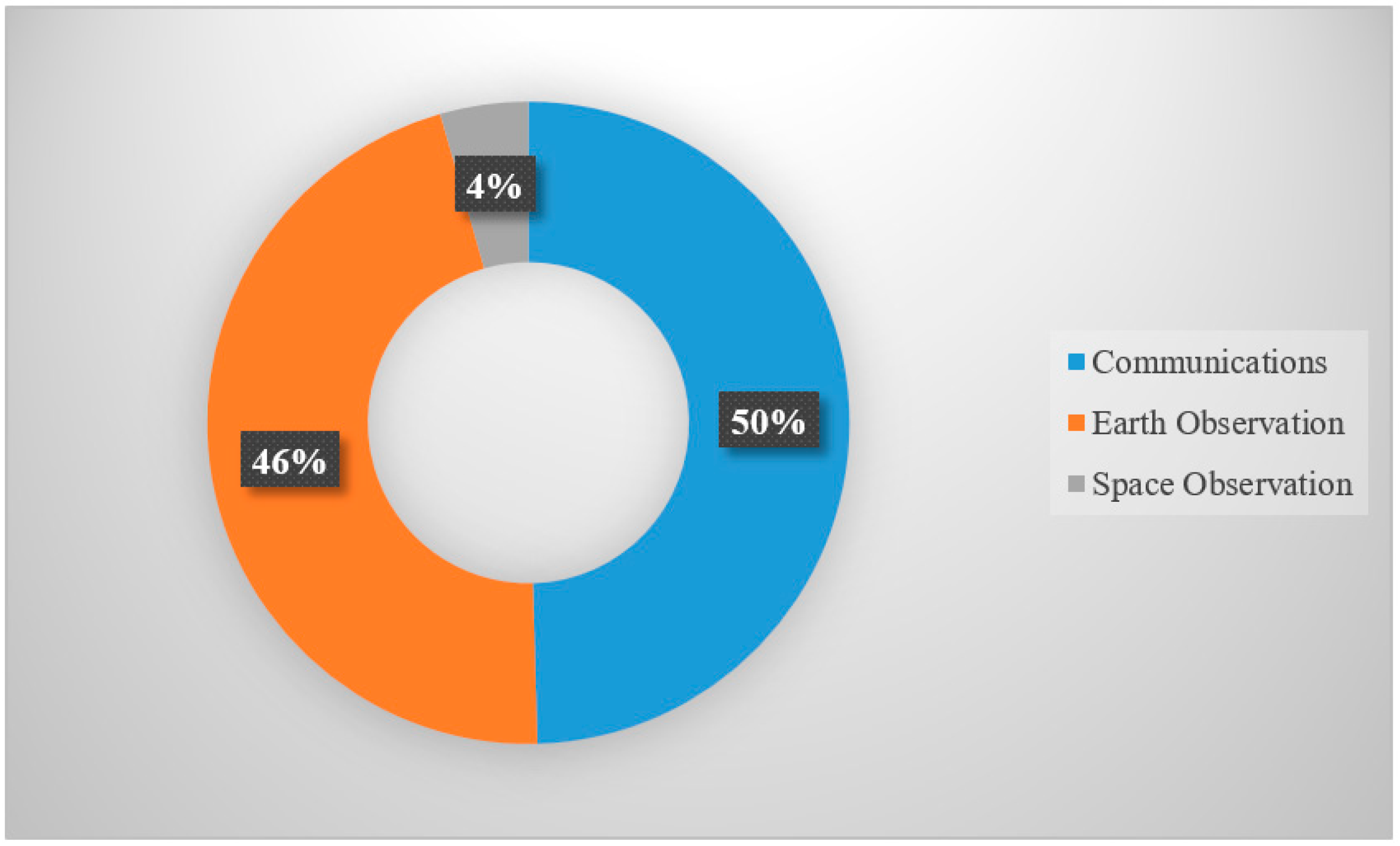 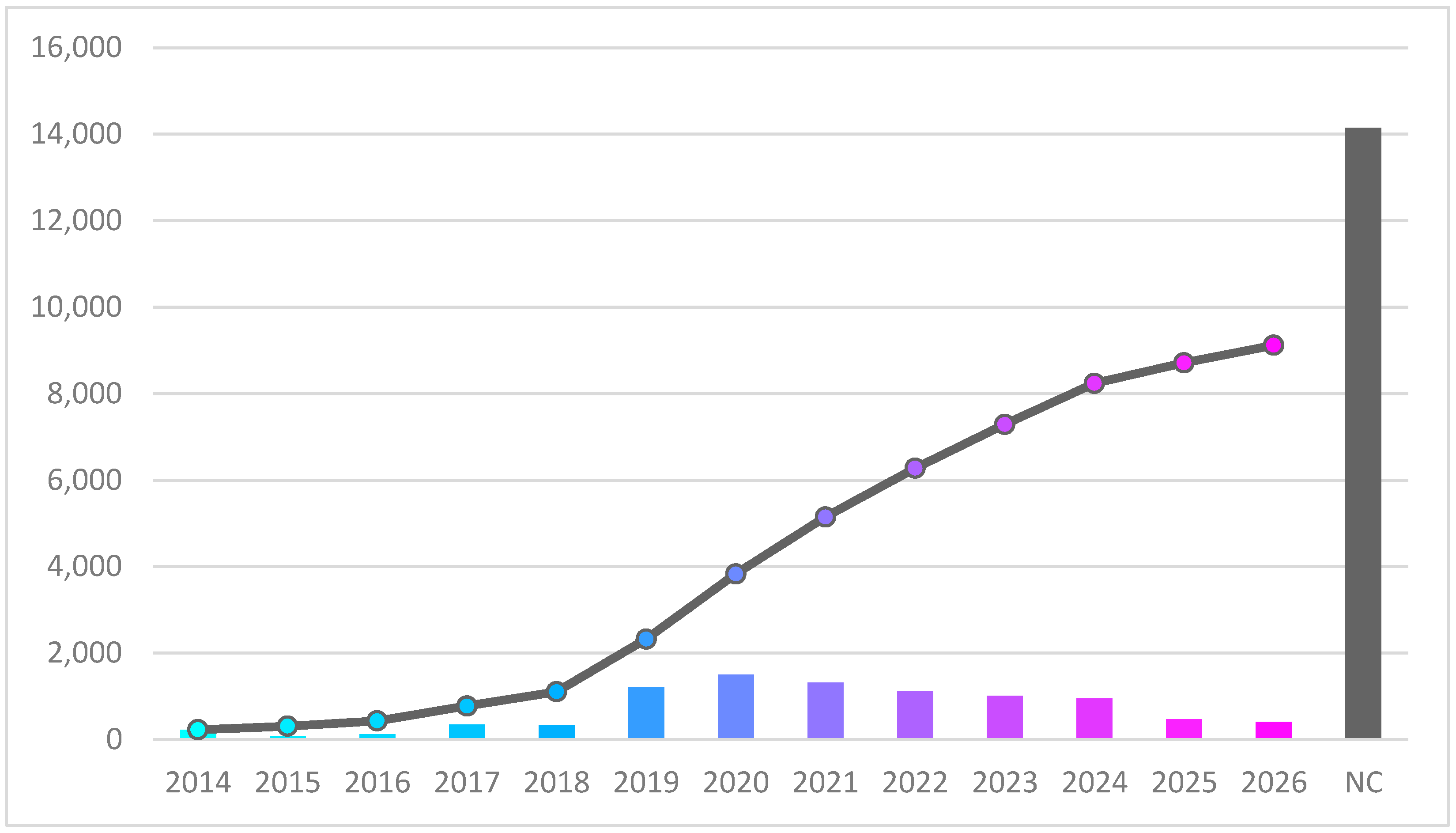 Although some constellations still have unpublished years of completion, many are expected to be in orbit by 2022 with a peak in 2020. This reflects the rapid development of the market and the high competitiveness which stresses the shortening of the time-to-market. A clear outlier is the Starlink constellation from SpaceX, with a 4425-element constellation dominating the columns of the years 2019 to 2024—the year in which it is expected to be completed. This delay in the time-to-market is probably due to the large amount of satellites that are expected to be placed.

Looking at the cumulative sum, the number of satellites in orbit is going to increase more than linearly with about 8000 spacecraft in orbit in 2024 due to constellations only. The resulting volume of traffic opens up a question about whether it is possible to sustain this development or not, under several points of view. For example, the current ground segment infrastructures will probably not be able to monitor and control such a large number of satellites. A major satellite ground service provider such as KSAT is already investing for infrastructure enlargement [15]. At the same time, constellation management shall be enhanced to make an efficient use the new infrastructure. This requires new operational architectures towards higher automation, either onboard or on ground, involving, for instance, artificial intelligence and virtual reality [16,17]. A second concern involves the communication, with the RF spectrum becoming possibly overcrowded and the required data-throughput increasingly larger. Lastly, but probably most importantly, the space traffic and debris issues, which may prevent the safe and successful operation of spacecraft [17].

As far as the size is concerned, the proposed constellations are quite widespread. According to Figure 3, roughly half of the constellations are relatively small, containing less than 50 elements. Constellations with numbers of elements between 50 and 150 elements appear to be quite appealing as well, with a 22% share. Larger size slots are instead of particularly low interest. Finally, a considerable 16% features non-declared sizes, as anticipated. 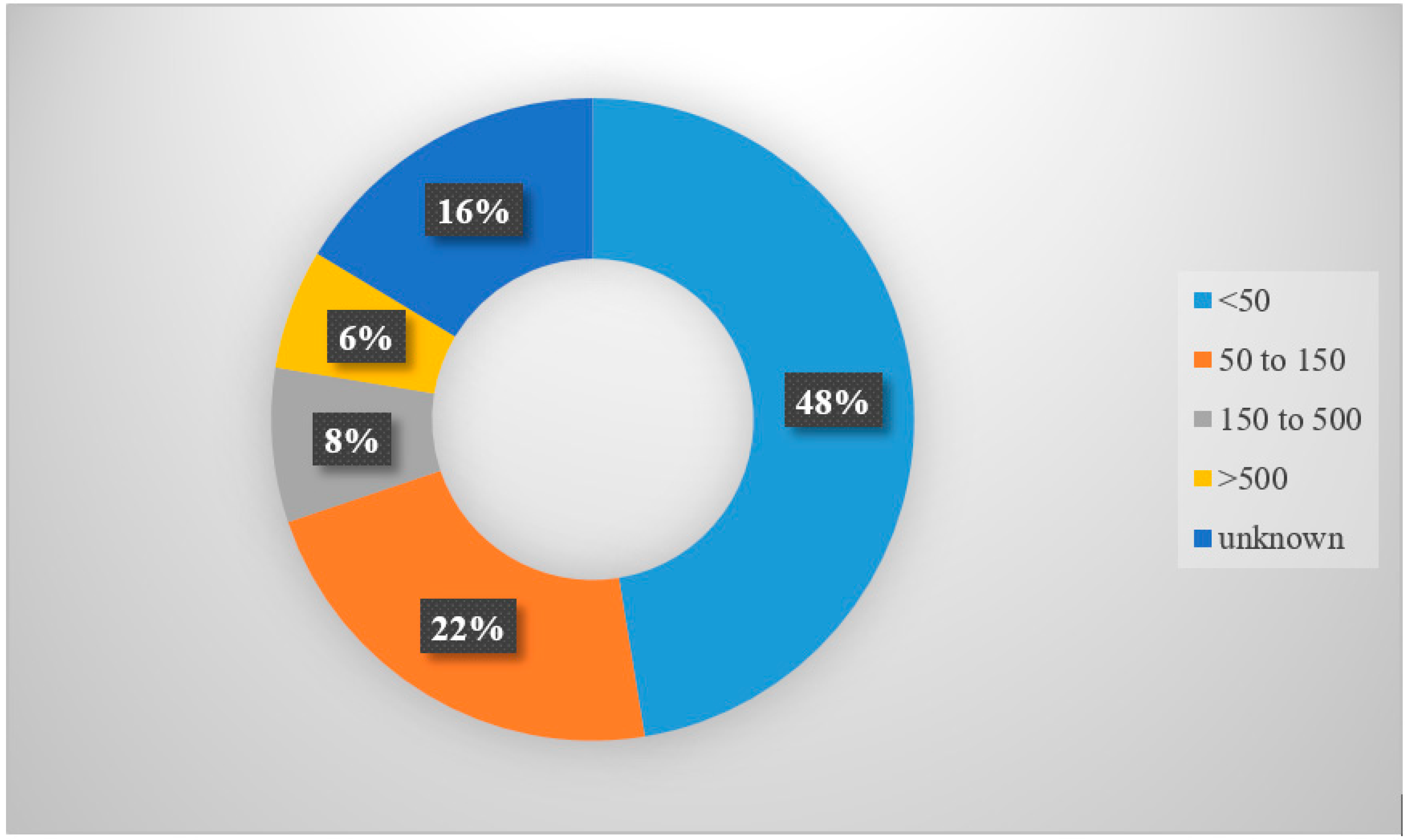 Satellite sizes show a clear bias towards micro and nano classes, reflecting the trend towards the miniaturization of satellite platforms in general (Figure 4). Although 35% of the constellation projects do not declare size, 30% belong to nano-class and 17% to micro-class. Pico, mini, medium and large classes reflect the minority, with a total share of 18%. This means that constellations are going to be composed of satellites weighting mainly from 1 to 100 kg. 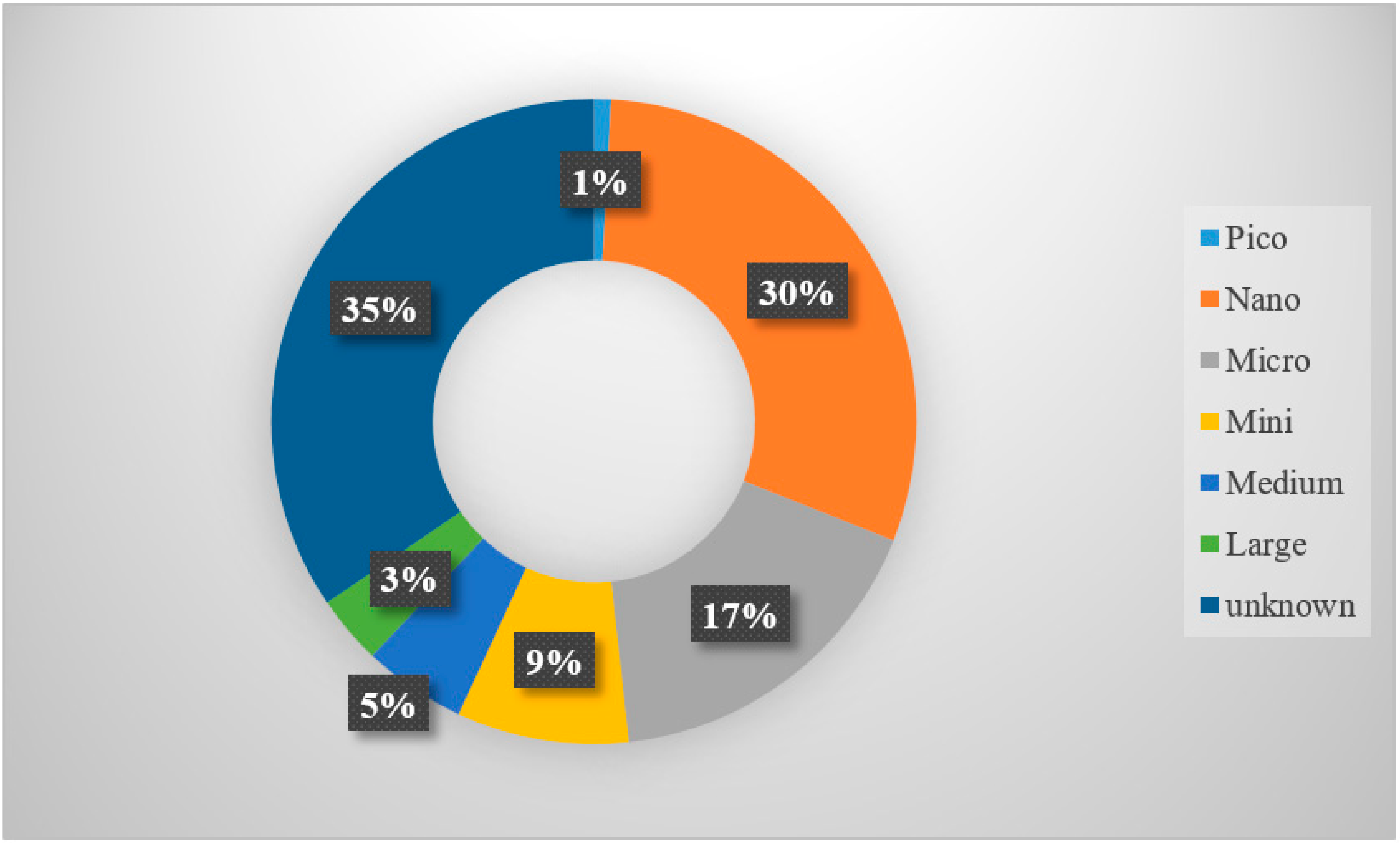 Large constellations will require a paradigm shift with respect to the way space missions are currently handled, with major challenges involving mainly three areas, namely constellation management, communication and space traffic. The level of maturity reached by these three areas is, however, not homogeneous: communication is probably the most matured, where relevant work is being done concerning infrastructure integration and protocol efficiency.

Some significant past experience in constellation management was reviewed in the full article; still, the need for an improved level of automation is clear. In this respect, artificial intelligence seems to be a valuable option, together with infrastructure sharing for rapid development and commercial viability.

On the other hand, space traffic management is mostly unprepared, with significant developments only in terms of debris countermeasures. Some extensions of the air traffic regulation are expected in the years to come to mitigate the current free-space policy covered by the Outer Space Treaty.

Although many technical challenges are still being addressed, the amount of work that has been analyzed during this review suggests good chances of success for large constellation missions.