Subjects: Others
View times: 76
Submitted by:

The integrin associated protein (CD47) is a widely and moderately expressed glycoprotein in all healthy cells. Cancer cells are known to induce increased CD47 expression. Similar to cancer cells, all immune cells can upregulate their CD47 surface expression during infection. The CD47-SIRPa interaction induces an inhibitory effect on macrophages and dendritic cells (dendritic cells) while CD47-thrombospondin-signaling inhibits T cells. Therefore, the disruption of the CD47 interaction can mediate several biologic functions. Upon the blockade and knockout of CD47 reveals an immunosuppressive effect of CD47 during LCMV, influenza virus, HIV-1, mycobacterium tuberculosis, plasmodium and other bacterial pneumonia infections.

The CD47 is expressed on both hematopoietic and non-hematopoietic cells and plays crucial role in immune regulation and maintenance of homeostasis [1][2][3]. Its expression level varies depending on cell types and pathophysiological conditions. In normal physiological conditions, all healthy cells express moderate level of CD47. However, migrating stem cells and young red blood cells exhibit increased levels of CD47 to evade macrophage attack [4][5][6][7][8]. In pathologic conditions, varieties of cancer cells are known to induce increased CD47 surface expression as a mechanism to evade macrophage mediated phagocytosis [9][10][11]. In addition to cancer, all immune cells upregulate CD47 upon pathogen invasion [12]. Typically, poxvirus has been shown to encode expression of CD47-like protein and this strongly inhibits the activation of macrophages and T cells. Thus, the CD47 expression in poxvirus is an immune evasion mechanism to promote its virulence and pathogenesis [13][14].

The two most known interactions of CD47 is with signal regulatory protein alpha (SIRPa) and thrombospodin-1 (TSP-1). SIRPa is widely expressed on macrophages and dendritic cells while thrombonspondin-1 is a secreted matricellular glycoprotein [12]. The CD47-SIRPa interaction induces an antiphagocytic signal in macrophages and dendritic cells. This interaction leads to the recruitment and activation of Src homology phosphate (SHP-1 and SHP-2) thereby inhibiting the myosin-IIA and this results in prevention of phagocytosis [12][15]. The mechanism of CD47-mediated suppression on innate immune cells is via the recruitment and activation of Src homology two domain-containing phosphatases, SHP-1 and SHP-2. Activated SHP-1 and SHP-2 dephosphorylate immune-receptor tyrosine-based inhibitory motifs (ITIMs), thereby preventing downstream activation-signaling in macrophages, dendritic cells and NK cells [16][17][18][19][20][21][22][23]. The disruption of CD47/SIRPa-signaling increases macrophage mediated phagocytosis of diseased vascular tissue and cancer cells. This leading to regression of much different type of tumors both in vivo and in vitro [24][25][26][27][28][29]. Similar to cancers, there is growing evidence that the inhibition of CD47/SIRPa interaction induces an antimicrobial effect during infections [30][31][32][33].

Thrombospondin-1 is a multifunctional protein that plays several crucial roles in regulating cell proliferation and differentiation. Although it is shown to bind to multiple proteins, the most studied interaction is with CD47 [34][35]. The CD47-TSP-1 interaction on antigen presenting cells (APCs) inhibits inflammasomes and interleukin 1b (IL-1b) and also inhibits T cells proliferation, activation and cytotoxicity [36]. In addition to overexpression of CD47 by cancer cells as a survival mechanism, TSP-1 ligation of CD47 is shown to increase proliferation and survival of cutaneous T-cell lymphomas (CTCL) and hence blockade of CD47/TSP-1 interaction results in CTCL regression [37][38].

As an inhibitory innate immune checkpoint molecule, the CD47-signaling pathways have been found to be an important in regulating both innate and adaptive immunity. The blockade of CD47 using anti-CD47 antibody shows a promising therapeutic effect on different tumors. Indeed, several studies on the genetic inactivation or blockade of CD47 demonstrate therapeutic potential during infection. Recently, Cham et al. Shown that CD47 blockade mediates similar immunotherapeutic effect during viral infection due to increased activation of both innate and adaptive immune response after CD47 blockade. However, the use of anti-CD47 antibody in other infections remains to be investigated.

To date, several studies have been done using several anti-CD47 antibodies in various cancer studies with insightful mechanisms of action. CD47 expression become an interesting research area when cancer cells were known to have an increased CD47 expression as a survival mechanism and the blockade of CD47 resulted in increased phagocytosis by macrophages and suppression of many tumors.

Due to the increased surface expression of CD47 on cancer cells, anti-CD47 can selectively target a macrophages mediate phagocytosis and clearance. It is important to understand that blocking an antiphagocytic molecule such as CD47 may not be enough for phagocytosis. The expression of several pro-phagocytic ligands or molecules on the surface of stressed cells, tumor, and infected cells is important to facilitate phagocytosis. Pro-phagocytic molecules such as phosphatidylserine, asialoglycoproteins and migration of calreticulin from the endoplasmic reticulum to cytoplasmic membrane occur on tumor and infected cells unlike in healthy cells [39][40][41]. Considering the fact that healthy cells does not or express these pro-phagocytic molecules at low level, therefore the administration of anti-CD47 may not cause phagocytosis or apoptosis on healthy cells.

Several different types of anti-CD47 antibodies such as MIAP301, MIAP410, Hu5F9-G4, CC-90002, SRF231, B6H12.2, ALX148 has been use in during cancer and infection [12][15][42][43][44]. The two most known clones of anti-mouse CD47-blocking antibodies are MIAP410 and MIAP301. The MIAP410 treatment in virus infected mice is reported to result to an increased proliferation and activation of innate and adaptive immune cells. This antibody has been reported to have both antiviral and anti-tumor in two distinct viral infections and several tumors. The Hu5F9-G4 is a humanized anti-CD47 that disrupts the CD47-SIRPa interaction thereby promoting macrophage mediated phagocytosis and elimination of several human tumors both in vivo and in vitro. Due to the unselected inhibition of CD47, the administration of anti-CD47 antibody leads to a mild anemia as a result of increased red blood cells attack by phagocytic cells [43][45][46]. The CC-90,002 is also a humanized anti-CD47 Abs that is reported to be under clinical trial for the treatment of both solid and hematologic malignancies [47]. Another humanized antibody (SRF 231) is also reported to be tested on pre-clinical trial for malignancies [15]. The B6H12.2 CD47 blocking antibody has been use to suppress non-Hodgkin lymphoma tumor [48][49]. The ALX148 is a more modified version of CD47 blocking antibody by fusing the inactivated human IgG1 Fc with the modified SIRPa D1 domain. This antibody has been reported to promote macrophages and dendritic cells activation, increased inflammatory cytokine production and increased antitumor T cells effector function. Addition to its effective antitumor function, the antibody does not cause anemia in an in vivo setting [50]. All these CD47-blocking antibodies (both mouse and humanized) unanimously show a similar immunological effect resulting in increased phagocytosis and activation of antigen presenting cells, increased proliferation and activation of cytotoxic CD8 T cells during tumor and viral infections.

As an inhibitory protein, both the genetic knockout and blockade of CD47 results in increased activation of antigen presenting cells (APCs) during cancer and infection [51][52]. Several studies reveal that the blockade of CD47 as an antiphagocytic ligand increase the phagocytic activity and thereby enhancing antigen presentation to T cells [10][53][54][55]. Therefore, treatment with anti-CD47 antibody increases the capacity of the APCs in bridging innate and adaptive immune response leading to enhanced potency of T and B cells immunity. However, there are growing evidences that the blockade of CD47 ligation can induce cancer cell apoptosis [56]. In addition to above-mentioned effect, the blockade of CD47 enhances interferon-I response and this was strongly associated with upregulation of STING pathway in APCs in tumor [57][58][59]. Demeure et al. suggests that the disruption of ligation of CD47 during pathogen invasion may increase inflammatory cytokine response by dendritic cells [60]. Though not well studied, CD47 was identified as an interferon stimulated gene and as a host defense mechanism upon IFNa stimulation [61]. With such an immunotherapeutic effect of anti-CD47 antibody, one could speculate that the treatment of the anti-CD47 may also increase the interferon response and APCs activation during infection. 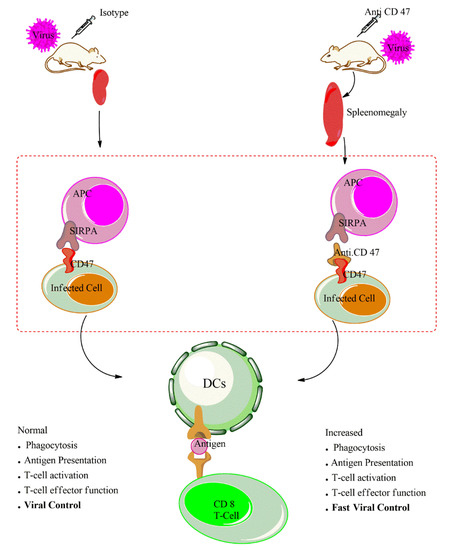 Figure 1. Treatment of isotype control to mice following a viral infection leads to limited change in the splenic architecture, normal phagocytosis, normal antigen presentation and therefore resulting to a normal activation and cytotoxicity of T cells. On the other hand, the administration of anti-CD47 antibody result to a splenomegaly, increases phagocytosis of infected cells, increase antigen presentation, enhances T cell activation and function and faster viral control.

As highlighted above, both the genetic knockout and blockade of CD47 as an immunosuppressive protein leads to an elevated innate and adaptive immune responses. The administration of anti-CD47 antibody increases the phagocytic activities of virus infected cells, increases antigen processing and presentation by APCs and this enhances activation capacity of antiviral CD8 T cells. Therefore, the anti-CD47 antibody increases the activation of both innate and adaptive immune response in two distinct viral infections. With such an immune-therapeutic effect of anti-CD47 blockade on both cancer and viral infection, this antibody would be a unique target in virus-associated cancers such human papillomavirus, hepatitis B and hepatitis C virus, Epstein–Barr virus, human T-lymphotropic virus, Kaposi’s sarcoma-associated herpesvirus (KSHV) and (re)emerging infections. The anti-CD47 is currently under clinical trial for cancer and can be amenable as an immunotherapeutic target for infectious diseases.