Among the flavonoids, hesperidin has recently attracted the attention of researchers, because it binds to the key proteins of the Severe acute respiratory syndrome coronavirus 2 (SARS-CoV-2). Several computational methods, independently applied by different researchers, showed that hesperidin has a low binding energy, both with the coronavirus “spike” protein, and with the main protease that transforms the early proteins of the virus into the complex responsible for viral replication. The binding energy of hesperidin to these important components is lower than that of lopinavir, ritonavir, and indinavir, suggesting that it could perform an effective antiviral action. Furthermore, both hesperidin and ascorbic acid counteract the cell damaging effects of the oxygen free radicals triggered by virus infection and inflammation. 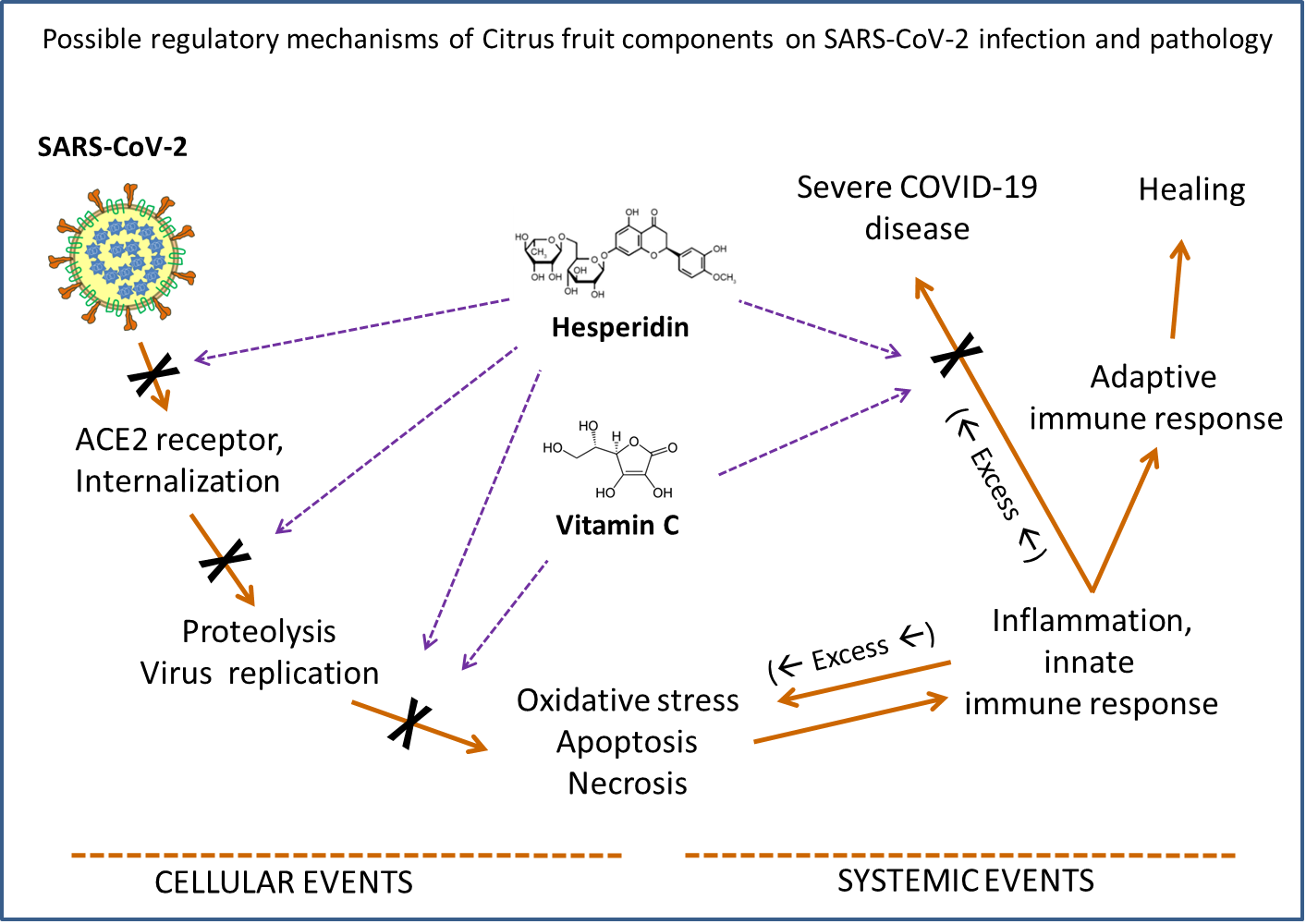 Among the benefits of the Mediterranean diet for the protection from many diseases, there is also the high consumption of foods rich in bioactive substances such as polyphenols and vitamins, including vitamins A, C, D, E. Food polyphenols constitute a large family of substances, with beneficial effects in a large group of communicable and non-communicable diseases. These compounds support and improve the body’s defenses against oxidative stress and in the prevention of cardiovascular diseases, atherosclerosis and cancer. In addition, they show anti-inflammatory, antiviral and antimicrobial activities. This article considers the nutraceutical properties of citrus fruits, with particular attention to hesperidin and vitamin C as potential medicines against Severe acute respiratory syndrome coronavirus 2 (SARS-CoV-2), for their activities as antiviral, antioxidants, and modulators of inflammation.

To enlighten the possible effect of the citrus components on COVID-19, it is useful to start with a brief description of the virus’s infectivity and its pathology. Figure 1 presents the main steps of the viral cycle and its consequences on the cell, with the sites where the modulating action of hesperidin and vitamin C might take place, as discussed in the subsequent sections.

Figure 1. Cellular cycle of the Severe acute respiratory syndrome coronavirus 2 (SARS-CoV-2) virus and the places of the inhibition of virus-induced cellular and systemic pathology by hesperidin and vitamin C (indicated with “X”).

2. Hesperidin and the Virus

Several authors (reviewed in ref. [1]) have tested  natural substances with potential antiviral effect, and antiviral drugs already known in the literature, for their binding to SARS-CoV-2 proteins. Of all, hesperidin was the most suitable to bind to the “spike”. By superimposing the ACE2—receptor binding domain (RBD) complex on the hesperidin—RBD complex, a clear overlap of hesperidin with the ACE2 interface was observed, which suggests that hesperidin may disrupt the interaction of ACE2 with RBD.

A second theoretical site of low energy binding of hesperidin with SARS-CoV-2 is the main protease that allows the processing of the first proteins transferred from the viral genome-pp1a and pp1ab-into functional proteins in the host cell. This enzyme is called “3Clpro” or “Mpro” by the various authors, and is the target of many chemical antiviral drugs. This specific binding has also been confirmed by other authors: in a screening of several potential molecules capable of binding to 3CLpro, hesperidin is the second most efficient for binding to chain A, performing better than Lopinavir and Ritonavir as reference drugs. The flavanone interacts with several amino acids of the protein through hydrogen bonds, and the interaction of hesperidin is more effective than that realized by the reference drug nelfinavir.

In addition to hesperidin, other orange flavonoids less represented quantitatively, like tangeretin, naringenin and nobiletine, also have a low binding energy (comparable to the reference ligands, lopinavir and nafamostat) to the three essential proteins, suggesting that these interactions could also contribute to the inhibitory effect against virus infection.

There is an important precedent when the authors studied natural compounds capable of inhibiting 3CLpro of the SARS virus [2], using cell-based proteolytic cleavage assays. Out of seven phenolic compounds tested, hemodyne and hesperetin inhibited proteolytic activity in a dose-dependent manner, with IC50 of 366 micromol/L and 8.3 micromol/L respectively. Interestingly, this research suggests that the inhibition of viral protease occurs at concentrations of hesperidin of the same order of magnitude as those achievable in plasma, with a large oral supplement of orange juice. Since coronavirus main protease structural backbone and active site conformation are conserved despite sequence variations, it is conceivable that the inhibitory effect of hesperidin previously observed in SARS virus can be exploited also in SARS-CoV-2.

An efficient oxidative metabolism at the mitochondrial level (without unwarranted formation of free radicals) and the balance of oxidation reactions, due to the intervention of the enzymatic systems and various scavenger molecules, are essential for the vitality of the cells of each tissue. Viruses break this balance and induce oxidative stress, which in turn facilitates specific phases of the life cycle of SARS-CoV-2 [2], and eventually cell death (Figure 2). Several lines of evidence (reviewed in [1]) show that hesperidin contributes significantly to antioxidant defense systems as an effective agent against superoxide and hydroxyl radicals, and its derivative hesperetin inhibits nitric oxide production by LPS-stimulated microglial cells. 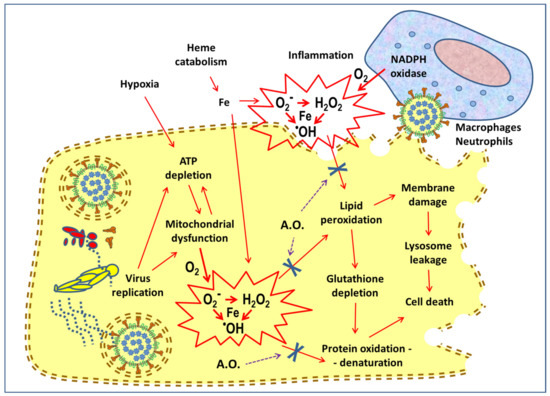 Figure 2. Schematic representation of the mechanisms of generation of oxygen free radicals in the course of Coronavirus disease 2019 (COVID-19), and assumptions about the antioxidant (A.O.) action sites, indicated with “X”.

Systemic perturbations associated with the severity of COVID-19 disease include free heme release and hyperferritinemia, a sign of dysregulation of iron metabolism, which in turn induces the production of reactive oxygen species, such as superoxide anion (O2−), hydrogen peroxide (H2O2); hydroxyl radical (·OH), and promotes the oxidative stress [3]. In this pathological process, the dysfunction of mitochondrial oxidative metabolism also plays an important role, leading to platelet damage and promoting the formation of thrombi. Another experimental model of generation of free radicals is represented by ischemia and reperfusion (I/R). This occurrence has been described also in COVID-19 [4]: during prolonged hypoxia of a tissue, the cells undergo structural damage, especially in the mitochondria and the endoplasmic reticulum. In addition, the purine metabolism ends with the formation of abundant quantities of xanthine. When the oxygen brought by the blood returns to the same tissue, these biochemical mechanisms—i.e., the mitochondrial chain, the endoplasmic reticulum and xanthine oxidase—generate a monovalent reduction of oxygen with the formation of superoxide and other chain radicals. Finally, an important source of free radicals during infection are the enzyme NADPH oxidase of phagocytic cells (neutrophils, eosinophils, macrophages) which, activated by the inflammatory process, produce large quantities of toxic oxygen derivatives with a microbicidal function. Under particular circumstances, when their production is in excess or the scavenger systems are inefficient or saturated, reactive oxygen species may escape from the cell that produces them and be released into the extracellular environment, becoming harmful and amplifying the injury due to inflammation.

Various in vitro and in vivo studies have shown that hesperidin’s antioxidant activity is not limited to its free radical scavenger activity, but also increased cellular defenses against oxidative stress and reduced inflammation makers via the ERK/Nrf2 signaling pathway [5][6]. Hesperidin could be particularly useful in elderly people who suffer from greater oxidative stress. Although the reasons for a difference in severity of COVID-19 disease in subjects of different ages are unclear, it is conceivable that a key factor is the redox imbalance of elderly subjects with low antioxidant capacity. Hesperidin demonstrated antioxidant activity in rats after an intensive training program, and attenuated the secretion of cytokines by stimulated macrophages [7]. In a model of rheumatic arthritis induced by Freund’s complete adjuvant, hesperidin successfully reversed the signs and symptoms, inflammatory markers and lipid peroxidation [8].

An antioxidant effect can be exerted also by Vitamin C. This vitamin, in addition to participating in the synthesis of collagen in the connective tissue, has a strong antioxidant effect, able to reduce the effects of free radicals, together with other vitamins, enzymes and minerals (zinc, selenium). We suggest that a beneficial effect of low-medium doses of vitamin C in the first stages of COVID-19 infection could also be due to the protection of cells from damage caused by the virus and/or by free radicals produced in the course of dysregulated inflammatory and immunopathological reactions (Figure 2).

The beneficial effects of an adequate amount of citrus fruits or of the integration of diet with vegetal extracts may result from the synergistic effects of their components, which provide protection against virus replication and oxidative damage.