The introduction of environmental impact targets around the world has highlighted the need to adopt alternative sources of energy, which can supply the demand and mitigate the damage caused to the environment. Solar energy is one of the main sources of alternative energy, and it is considered an abundant source of clean energy. However, to facilitate and encourage investors interested in the installation of photovoltaic energy systems for electricity production, it is essential to evaluate the factors that impact the economic viability of the projects.

Renewable energy sources (RES) are viable alternatives to supply energy demand, reduce energy costs and mitigate environmental impacts. Within these sources, photovoltaic (PV) energy stands out converting sunlight into electrical energy. The Sun is the main source of energy on our planet, but today a minor portion of that energy is harnessed, and the potential for further developments is huge.

A broader view of the economic feasibility of PV energy investments needs to identify the risk factors that can make investments in PV energy financially unviable. Several factors have been pointed out around the world and vary among different studies.

From the 2000s onwards, a greater number of publications in the area have been identified, reaching its peak in 2017 with 47 published works. Figure 1 illustrates the evolution in the number of publications per year of the studies found in the sample. These results confirm that the interest in the research on the economic feasibility of solar/photovoltaic energy in the world has grown especially in the last 10 years.

Figure 1. Evolution of the number of publications per year in the final sample.

It is easy to see how much the place of study influences the analysis of economic feasibility of this type of project. In fact, when analyzing these studies, it is possible to identify similarities of the analysis between manuscripts from the same region. Observing the number of countries found in the sample of studies, it is clear that the interest in the study on the feasibility of solar energy projects is a trend in many regions of the world, as shown in Figure 2.

Figure 2. Number of publications by country. 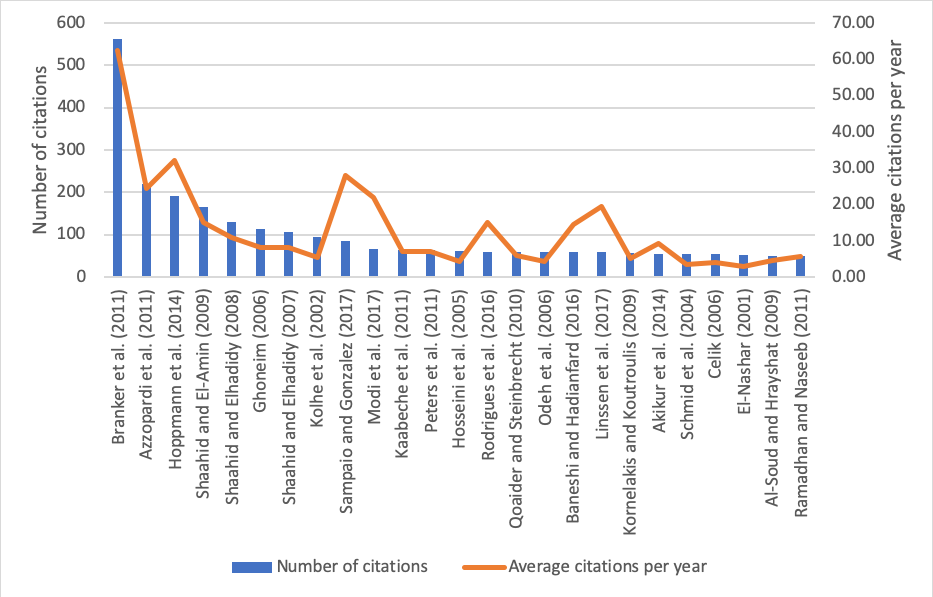 Figure 3. Number and average of citations of the most cited articles in the sample. Source: Azevêdo et al. [9].

Using the VOSviewer software as a tool, a network analysis of the sample data was performed to observe the use of the main keywords in the final sample of research papers. Figure 4 shows that the word “photovoltaic” is the most used by the authors, which appeared in 31 sample publications. The term “solar energy”, which is often used in conjunction with the term “photovoltaic”, is also widely used by researchers, with a number of 30 appearances in the sample. The terms “renewable energy” and “economic analysis” appear next, mentioned in 21 publications each. It is also possible to notice, thanks to the overlay visualization mode, that terms such as “net metering”, “techno-economic analysis”, and “homer”, for example, are being discontinued in these works. Conversely, new words are emerging and being used as keywords in the search for articles and reviews, such as “economic assessment”, “levelized cost of energy (LCOE)” and “self-consumption”, for example. 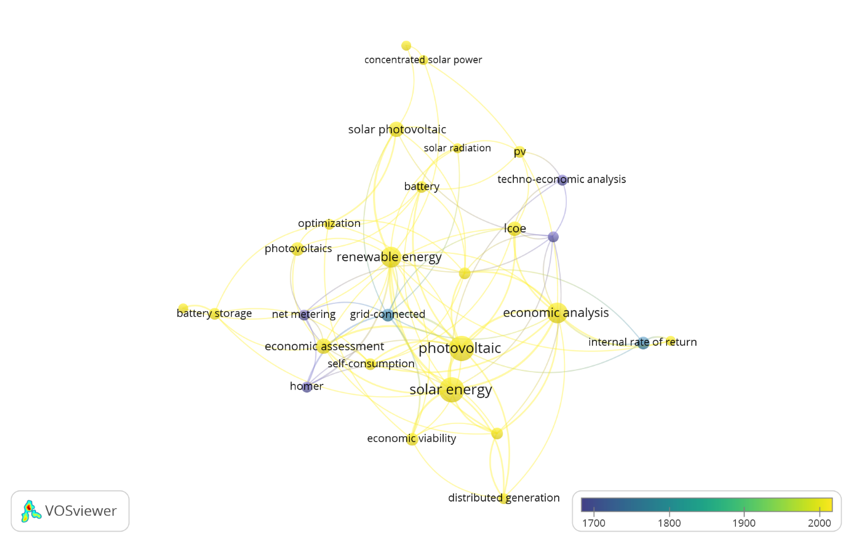 Figure 4. Map of bibliographic data of the main keywords of the sample, in overlay mode.

Among all the factors found, the investment cost was identified as the most prominent, present in 219 of the 225 works in the final sample. The following most recurrent factors in the studies analyzed are power generation, operation and maintenance cost, solar radiation, and useful lifetime. Figure 5 presents all the impact parameters identified in the sample, in the descending order of occurrence. 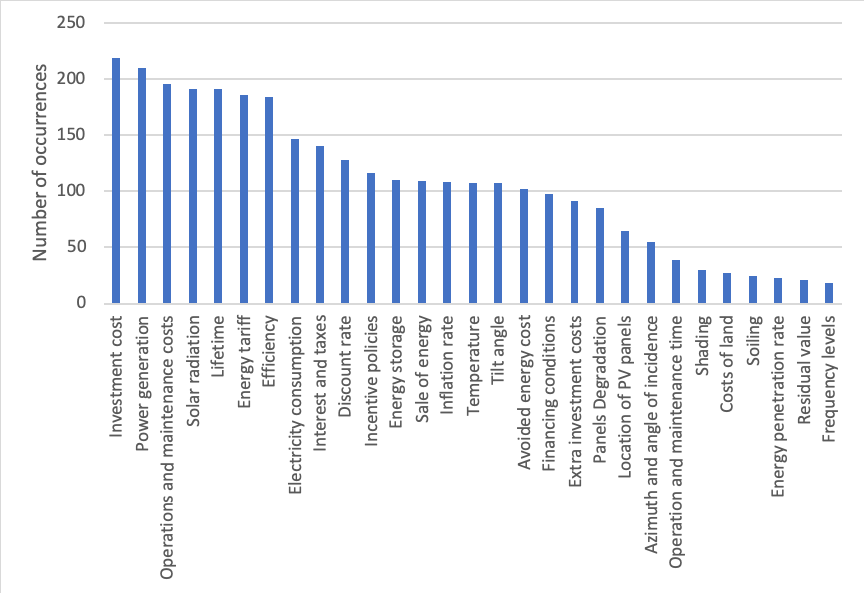 According to the factors identified, the parameters of this work were classified into five categories[10], based on the point of view in which they fit:

For further discussions on each of the studied factors, access Azevêdo et al. [9]

Analyzing the main characteristics of a sample of studies selected with the systematic literature review criteria, it has been possible to notice the growing interest in this area of research, through the rapidly increasing number of articles per year of publication. In addition to the relevance of these studies to the literature, through the general number of citations it has been possible to observe that, from 2015 to 2019, there was an increase of approximately 54% in the number of citations.

In our study, 29 factors were identified, which impact in some way on the economic feasibility of PV energy projects. Among the factors identified, the initial investment cost has been the most prominent, followed by power generation and operation and maintenance costs. Moreover, important terms are solar radiation, lifetime, energy tariff, efficiency, electricity consumption, and interest and taxes.

Finally, some factors vary widely from region to region, such as solar radiation, energy tariffs, temperature, and incentive policies, among others. Each factor ends up being influenced by another one, which reinforces the need to analyze all possible parameters for each case study. When compared to the places of publication, it can also be noted the diversity of the studies, as the factors considered in each study often vary greatly according to the region.