Vertebrate cutaneous sensory corpuscles are specialized sensory nerve formations located in the skin of all vertebrates and responsible for tactile sensation. Functionally, they are mechanoreceptors transducing external mechanical stimuli into electrical signals which will be later led to the Central Nervous System.

The structure of sensory corpuscles is formed by an axon, non-myelinating Schwann-like cells, a capsule of endoneurial and/or perineurial origin and extracelullar matrix molecules.

The vertebrate skin contains sensory corpuscles that are receptors for different qualities of mechanosensitivity like light brush, touch, pressure, stretch or vibration. These specialized sensory organs are linked anatomically and functionally to mechanosensory neurons, which function as low-threshold mechanoreceptors connected to peripheral skin through Aβ nerve fibers. Furthermore, low-threshold mechanoreceptors associated with Aδ and C nerve fibers have been identified in hairy skin. The process of mechanotransduction requires the conversion of a mechanical stimulus into electrical signals (action potentials) through the activation of mechanosensible ion channels present both in the axon and the periaxonal cells of sensory corpuscles (i.e., Schwann-, endoneurial- and perineurial-related cells). Most of those putative ion channels belong to the degenerin/epithelial sodium channel (especially the family of acid-sensing ion channels), the transient receptor potential channel superfamilies, and the Piezo family.

Tactile sensation is one of the most important components of mechanosensation, and originates in nerve fibers that can be distinguished based on the morphology of their skin terminals (i.e., free nerve endings and sensory corpuscles), as well as on the conduction speed of their action potentials. The sensory corpuscles are the receptors responsible for tactile modalities including light brush, touch, pressure sensation, stretch, and vibration [1][2][3]. These mechanosensitivity modalities depend on Aβ, Aδ and C nerve fibers (distinguished according to axon diameter, degree of myelination, and axonal conduction velocity) connected to low-threshold mechanoreceptors (LTMRs).

Classically, both the mechanical properties of periaxional cells of the sensory corpuscles and differentiations on the axonal membrane were considered necessary and sufficient to generate the so-called receptor potential and consequently the action potential (see for review [17]). Nevertheless, the discovery that certain ion channels are at the basis of sensitivity, and that mechanical forces can trigger some ion channels (mechanosensitive or mechanically gated ion channels) support that mechanotransduction occurs via those ion channels. Consistently, it is believed that LTMRs innervating the skin [18][19][20][21][22][23][24] and their cutaneous target cells [25] display ion channels activated by force or displacement. In other words, gating of ion channels present in cutaneous sensory corpuscles in response to mechanical stimuli is the first step to transduce mechanical energy into electrical activity [26].

The body surface of mammals is covered by two structural types of skin, i.e., non-hairy, or glabrous, and hairy skin. Glabrous skin contains no hairs, has a thick epidermal layer, and is restricted to zones characterized by high discriminative touch (shape, size, texture) as the palm of hands or the plant of foot. Hairy skin covers more than 90% of the body surface, has a thin epidermal layer and is strongly associated with affective touch .

In the glabrous skin, four types of terminals associated with LTMRs have been functionally identified, each associated with different cells or sensory corpuscles, all of which have more or less specific tuning properties: Merkel cell–neurite complexes, Ruffini corpuscles, Meissner’s corpuscles and Pacinian corpuscles [27]Figures 1 and 2). 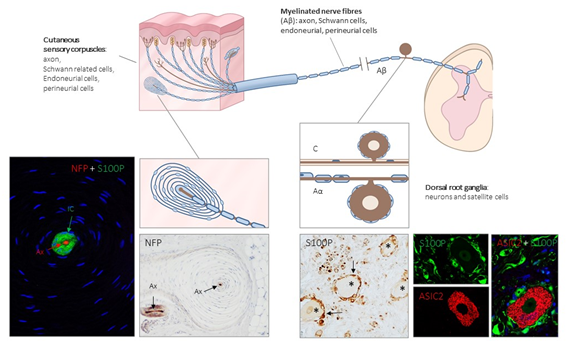 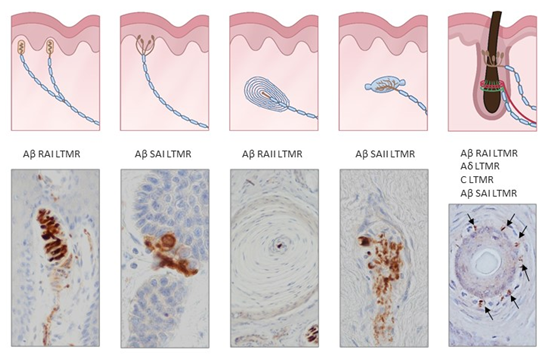 Structurally, cutaneous sensory corpuscles consist of a central axon, surrounded by non-myelinating Schwann-like cells variably arranged, and a capsule of endoneurial and/or perineurial derivation [28][29][30][31]. It must be emphasized that although the term central axon is widely used to denominate the neuronal component of sensory corpuscles, it actually represents the peripheral process of a pseudo-unipolar neuron, localized in dorsal root ganglia (DRG) or the sensory ganglia of the cranial nerves. Therefore, the so-called central axon corresponds sensu stricto to a dendrite, or better a dendritic zone as denominated classically (see [6,30]). Filling the spaces among the cells there is a chemically complex extracellular matrix [32][33][34].

Merkel cells are specialized epidermal cells [31] functionally connected to Aβ SAI-LTMRs to accomplish tactile discrimination of shapes and textures [36][37]. They are present in glabrous skin especially in touch-sensitive areas, such as fingertips and lips, as well as in specialized spots in hairy skin called touch domes [38][39].

The Merkel cell–neurite complex consists of two distinct but closely associated cell types: Aβ sensory neurons and the specialized epithelial cells denominated Merkel cells. The contacts between epithelial Merkel cells and the afferent terminals are synaptic-like ones (see [37]) that use glutamate [40][41], adrenalin [42], or serotonin [43] as a neurotransmitter. Recently we also found indirect evidence for an ATP-mediated neurotransmission (L. Cárcaba et al., unpublished). They also express ion channels directly related to or required for mechanotransduction (see below).

Meissner corpuscles are Aβ RAI-LTMRs sensitive to dynamic skin deformation, but that resolve spatial detail poorly . They are specific to human and primate glabrous skin, and are located within the dermal papillae, concentrated in areas particularly sensitive to light touch like fingertips, palms, soles, lips, face and the skin of male and female genitalia. Meissner’s corpuscles’ size and morphology are varied, but often they present an ellipsoid morphology being 80–150 μm in length and 20–40 μm in diameter . They consist of an axon from an Aβ nerve fiber, non-myelinating lamellar Schwann-related cells, and a more or less developed capsule of endoneurial origin [44].

Cutaneous Pacinian corpuscles are structurally complex specialized sensory formations localized in hypodermis, that work as Aβ RAII-LTMRs connected to Aβ sensory nerve fibers . They are oblong shaped, usually about 1 mm in length and display a typical onion-like structure. They consist of a central axon, sheated by non-myelinating Schwann-like cells forming the so-called inner core (with proper specific arrangements at the corpuscular terminal and ultraterminal segments) , both surrounded by the so-called intermediate layer of endoneurial cells, and all covered by the outer core–capsule complex of perineurial cells arranged in a multilayered concentric fashion [45].

Little information is available about cutaneous Ruffini’s corpuscles. SAII-LTMRs have been extensively characterised physiologically [46][47] but not morphologically. In many cases, SAII-LTMR responses have been recorded in nerve fibres innervating a tissue [46], but no evidence of Ruffini corpuscles in such tissues was morphologically present [48][49][50]. Cutaneous Ruffini’s corpuscles are fusiform structures with tapered ends. They consist of a single axon with numerous terminal branches embedded in a core of Schwann-related cells and collagen, all surrounded by a multilayered capsule of perineurial origin . Functionally they mediate stretching information .

The hair follicle shaft is innervated by lanceolate and circumferential endings belonging to Aβ RA-LTMRs, Aδ-LTMRs, and C-LTMRs; lanceolate endings are mainly sensitive to movement and low-frequency vibration [52][53]. The neck of hair follicles contains unmyelinated free nerve ending LTMRs (Figures 2 and 3). In mammals other than humans, D-hair receptors are the most sensitive mechanoreceptor of hairy skin, and there is practically no evidence for their existence in human hairy skin [54]. 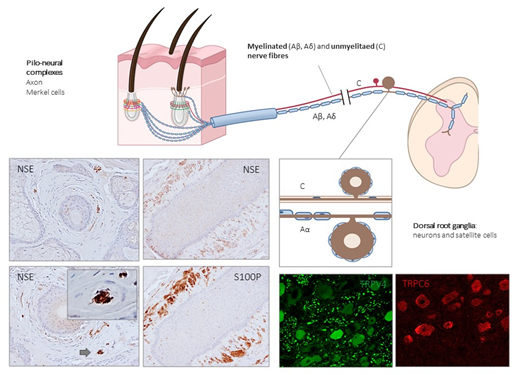 A population of unmyelinated LTMRs axons, so-called C-LTMRs, also innervate the hairy skin. The existence of C-LTMRs has been known for many decades, but is currently ignored, although they are relatively common in human skin [55]. The function of C-LTMRs is still unknown, and has been related to pleasant sensations, often associated with touch [56],  and could play a role in mechanical hypersensitivity after nerve or tissue injury[57].

Thus, the distinct sensory functions of glabrous and hairy skin are not only defined by their neurophysiological aspects, but also have noticeable morphological differences.