Carbohydrate-derived ionic liquids with at least one ionic counterpart derived from carbohydrate precursor have been explored as bio-alternatives to conventional ionic liquids for over a decade. Since their discovery, significant progress has been made regarding synthetic methods, understanding their environmental impact, and developing perspectives on their potential applications. Carbohydrates can be converted into cations or anions for ILs through standard reactions that are already applied widely in carbohydrate chemistry. Most of the research on sugar-based ILs has focused on cation synthesis, though the most promising synthetic route towards ILs (in terms of the number of required synthetic steps) involves transforming carbohydrates into anions such as gluconate, glucuronate, or galacturonate. Moreover, functionalization of poly(ionic liquid)s (PILs) with sugar moieties has also recently been investigated. The most common precursors for carbohydrate-derived ionic liquids include glucose, galactose, fructose, ribose, xylose, arabinose, isomannide, isosorbide, ribitol, and mannitol.

Ionic liquids (ILs), which are composed of organic cations and organic or inorganic anions, show negligible vapor pressure, high thermal stability, and very low flammability. These properties initially classified them as “green” solvents, representing them a promising alternative to VOCs[1].Simultaneously, their chemical stability and often high solubility in water, may question their  environmentally benign character. The improvement of this aspect has been proposed by the development of biomass-derived ILs that originate from compounds commonly existing in nature such as amino acids, carbohydrates, carboxylic acids, or choline. Biomass-derived ILs (bio-ILs) demonstrate lower toxicity and higher biocompatibility than their fossil fuel-derived analogues[2][3].

Among bio-ILs, considerable progress has recently been made regarding the use of sugars or carbohydrates, which are  abundant, inexpensive, renewable, and environmentally friendly. Ionic liquids and salts produced using carbohydrates have been investigated for over a decade, with initial efforts focused on their functionalization and how the introduced functionalities relate to their physicochemical characteristics.[4] Notably, such systems have been recognized for their applicability as organocatalysts and solvents in ways that take advantage of their chirality[5]. Currently, broadened perspectives regarding potential IL applications span electrochemistry[6], energy storage[7][8], anti-bacterial systems[9][10], herbicides[11], and biomass conversion[12]. Carbohydrates have also recently been shown to reduce toxicity when incorporated into common imidazolium IL structures, thereby further enhancing their biocompatible character[13]. Although sugars are an economically favorable starting material, the process of manufacturing their ionic derivatives was originally complicated because of the required multiple-step synthetic method[4]. Therefore, recent research efforts aimed at improving and simplifying the synthesis of carbohydrate-derived ILs have focused on implementing protocols to reduce the number of synthetic steps and/or integrate green chemistry approaches. Such improvements have highlighted a more economically promising perspective regarding carbohydrate-based ILs and their applications.

Due to versatile features such as hydrogen bond-rich structure, chirality, low-toxicity or high biodegradability, carbohydrate-derived ILs have been explored for a number of applications that span catalysis[14][15][16][17][18], biomedicine[6] and ecology[11], energy conversion and storage[7][8] or application as solvents[12][19] (Figure 1). 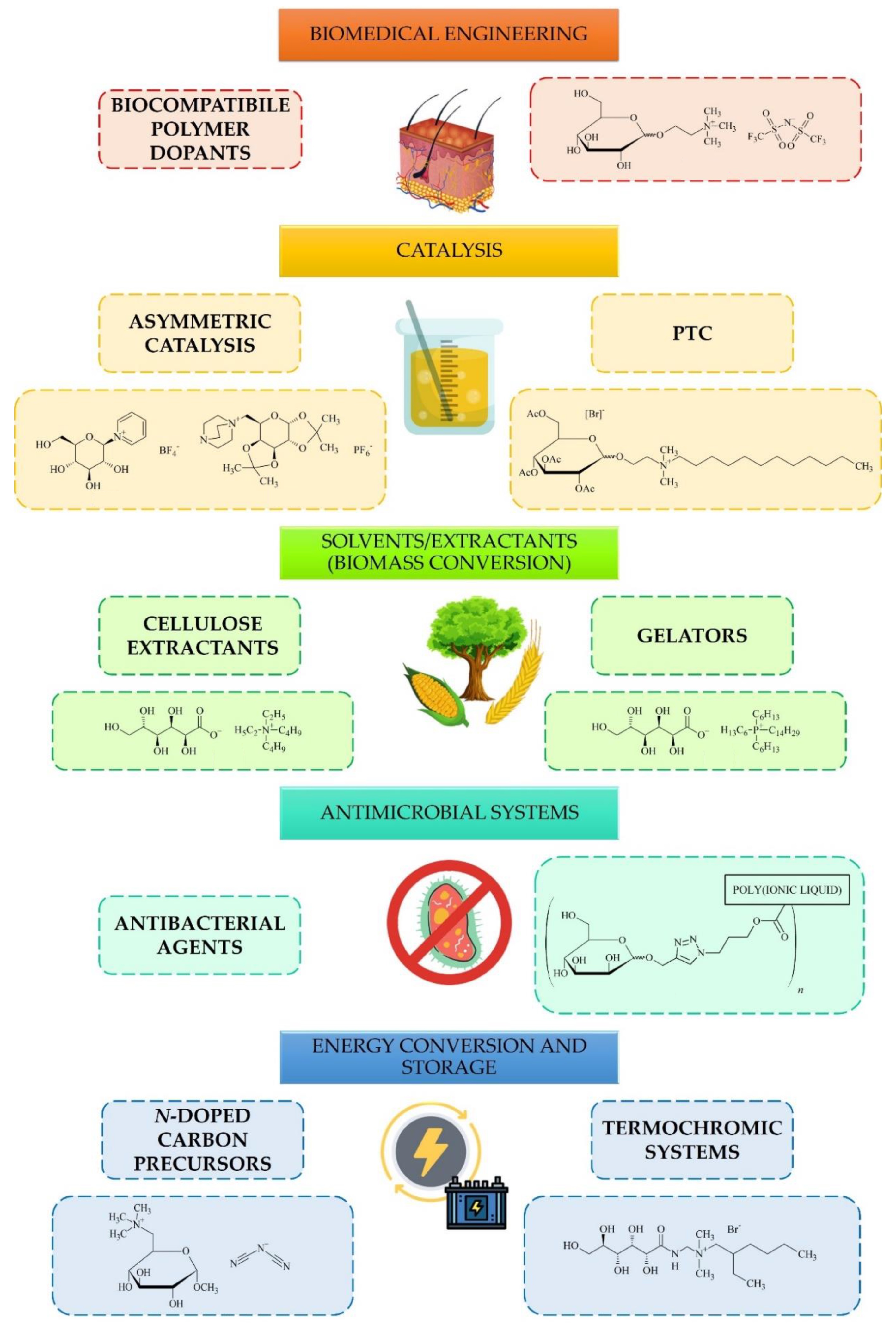