High-risk human papillomavirus (HR-HPV) is etiologically associated with the development and progression of cervical cancer, although other factors are involved. Overall, reports suggest a potential link of EBV to the development of cervical carcinomas in two possible pathways: (1) Infecting epithelial cells, thus synergizing with HR-HPV (direct pathway), and/or (2) infecting tissue-infiltrating lymphocytes that could generate local immunosuppression (indirect pathway). However, further studies are needed for a better understanding of the EBV/HR-HPV coinfection role in cervical carcinogenesis, in which in situ hybridization (ISH) and/or immunohistochemical methods are mandatory for discriminating the cell type infected by EBV.

The most important risk factor for cervical cancer development is infection with human papillomavirus (HPV) [1], with 99.7% of cervical carcinomas worldwide caused by high risk (HR)-HPV types, such as HPV16 or HPV18 [2][3]. While vaccines exist that protect against oncogenic HPV infection, global disparities still remain due to high costs [4][5]. However, HR-HPV infection is insufficient for cervical cancer development since low-grade squamous intraepithelial lesions (LSIL) usually regress to normal cells in cervical cytology or atypical squamous cells of undetermined significance (ASCUS). Only 3.6% of LSILs progress to high-grade squamous intraepithelial lesion (HSIL) [6], with a report of 50% regression in LSILs associated with HPV16 or HPV18 [7]. Accordingly, other host or environmental factors are necessary for cervical lesion progression, such as tobacco smoking (TS), oral contraceptive pills or immunosuppression, in particular infection with human immunodeficiency virus (HIV).

2. EBV Replication and Role in Cancer

EBV, also known as human herpesvirus 4 (HHV-4) is a gammaherpervirus that infects more than 90% of the human population worldwide [8]. It is characterized by a double-stranded DNA genome of 172 kb in length, surrounded by an envelope carrying various surface glycoproteins, with tegument proteins filling the space between the membrane and the inner icosahedral capsid [9]. EBV is related to some B cell-derived malignancies such as Burkitt’s lymphoma (BL) and Hodgkin’s disease (HD). Importantly, EBV is associated with some epithelial tumors, including undifferentiated nasopharyngeal carcinomas (NPCs) and a subset of gastric carcinomas (GCs) [8]. Figure 1 (left) shows the EBV genome organization with locations of latent genes. 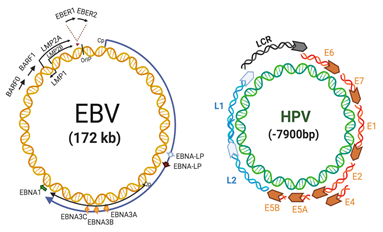 HR-HPV infection is insufficient for cervical carcinogenesis and involvement of other cofactors is essential. While factors involved in HR-HPV integration into the host genome are unclear [47], a prerequisite is DNA damage [48], TS being a very important factor for cervical cancer development [49] by activating the HPV16 p97 promoter and leading to E6 and E7 overexpression [50]. Moreover, HPV16 E6 and E7 collaborate with TS, increasing the tumor properties of epithelial cells [51][52], although other potential cofactors such as chronic inflammation and bacterial or viral coinfection are also suspected.

Experimental approaches evaluating molecular mechanisms involved in EBV/HR-HPV coinfection are limited. However, EBV LMP1 in combination with HPV16 E6 viral proteins in transformed mouse embryonic fibroblasts (MEFs) reduces components of DNA damage response (DDR) such as p53, pRb and p27, whilst increasing checkpoint kinase 1 (CHK1), NF-κB signaling, v-akt murine thymoma viral oncogene (Akt) and MAPK signaling [53][54]. In addition, LMP1 induces down-regulation of E-cadherin expression [55] and also regulates TWIST [56] and SNAIL [57] transcription factors and others related with cell motility. Moreover, LMP1 and E6 co-expression induces cell proliferation, resistance to apoptosis, anchorage-independent growth and tumor-formation ability in nude mice compared with single expression of EBNA1 or E6 [36]. In EBV-infected NPC cells, EBNA1 plays a role in EMT through inhibition of both microRNA (miR)-200a and -200b expression, while it up-regulates the expression of ZEB1 and ZEB2, their target genes [12]. Interestingly, double expression of LMP1 and HR-HPV E6 relates with a more aggressive form of malignant tumor such as breast adenocarcinoma [58] and cervical SCC [59]. Thereby, in the case of EBV-associated GCs, EBNA1 may induce constitutive and also IFNγ-inducible programmed death-ligand 1 (PD-L1) expression in EBV-infected epithelial- cells [60]. In HPV+ HeLa and SiHa cervical cells, transfection with a small interfering RNA (siRNA) for Myc knock down was able to reduce the hTERT promoter activity [61]. HPV16 E6 activates hTERT gene transcription through induction of c-Myc, which is overexpressed in cervical carcinomas [62][63]. Moreover, hTERT activation in BARF1-transfected PATAS monkey kidney cells was accompanied by up-regulation of c-Myc, while in HeLa cells BARF1 induces activation of telomerase binding directly to initiator elements in the hTERT promoter region [25]. Alternatively, both HPV18 E6 and E7 oncoproteins are necessary to increase EBV genome maintenance in normal oral keratinocytes (NOKs) and to induce the reactivation of the EBV lytic program in suprabasal layers of oral epithelial from an in vitro organotypic raft culture model [64]. However, a significant reduction in EBV immediate early (BZLF1, BRLF1) and early (BALF5, BMRF1) gene expression with increased expression of EBER1 was evidenced in HPV+/EBV+ human foreskin keratinocytes (HFK) compared to that in HPV-/EBV+ rafts [65]. In cervical cells, increased levels of EBER1 may contribute to the transition from inflammation to oncogenesis of HPV-associated cervical cancer by modulating innate immune responses [66]. In addition, LMP1 reduces the presence of HPV16 with no expression change in the EBNA1 and EBNA2 latent genes, suggesting that EBV latency is favored over lytic replication in HPV16+ cells. However, LMP1 is mostly expressed in B-cell lymphomas, lymphoproliferative disorders and NPC [67], but less in cervical and GCs [68][69]. In uterine cervix, latency III EBV infection is increased in CIN and cervical SCC compared with non-malignant samples [68], conferring a long-term persistence of EBV infection in malignant cells. Furthermore, reduced EBV replication mediated by HPV16 E7 is related to retarded expression of some markers related with early epithelial cell differentiation [65]. Similarly, cervical SCC EBV/HR-HPV coinfection is associated with decreased cell differentiation [59], closely related with a more aggressive tumor. Additionally, NOKs and FaDu hypopharyngeal carcinoma cells coinfected with EBV and HR-HPV show increased invasiveness in the lysophosphatidic acid (LPA) presence (glycerophospholipid able to stimulate cell migration) compared to EBV-/HR-HPV- and EBV+/HR-HPV- cells [70], resembling the effects of coinfection in cervical SCC [59]. According to our knowledge, the levels of BARF1 in cervical cancer have been examined in only one study, which reported 27% detection in tumors from Algerian women [71]. As previously stated, this protein has been suggested as an epithelial EBV oncogene, which is expressed in a cell differentiation-dependent manner [72]. Due to this lytic protein being expressed in a majority of EBV+ NPC and GC cells, the possibility that this protein is involved in EBV+ cervical carcinomas, working in both oncogenic process and immune evasion is plausible. Considering that EBV infection in normal epithelial cells is exclusively lytic [73][74], an interesting point is the establishment of EBV latency in epithelial cervical cells. In this respect, it has been suggested that previous DNA damage in cells is a requisite [75]. Thus, we can propose a scenario in which previous HPV infected and subsequently DNA-damaged cells (e.g., by HPV E7) are particularly susceptible to EBV latency establishment. Moreover, we can speculate on the possibility that HPV is involved in the activation of the EBV abortive lytic cycle, promoting expression of some lytic genes, such as Zebra or Rta, which has been reported to be important in EBV-mediated carcinogenesis. A hypothetical model in which HPV infection favors EBV latency establishment in epithelial cervical cancer cells is shown in Figure 2.