Marine anomaly variations (MAVs) refers to an abnormal decrease or increase of marine environmental parameters, which covers a specified spatial domain and lasts for a specified temporal duration, e.g., the monthly mean variation of sea surface temperature and the seasonal variation of sea surface height. These variations have evolution properties from production through development to death, which plays a significant role on exploring the evolution mechanism of marine environment and the mechanism. As few considering temporal evolution relationship, traditional spatiotemporal mining methods have great challenges in analyzing these MAVs. Thus, this paper takes the process semantics of MAVs to design the process-oriented mining workflow, and to explore the spatiotemporal patterns of MAVs.

Marine anomaly variation (MAV) has a property of evolution from production through development to death. We use a hierarchical framework of “geographic process-evolution sequence- instantaneous state” to represent the MAV.

The geographic process depicts an evolution from production through development to death as a whole, which consists of one to several evolution sequences. The changes within the process not only include thematic information but also the spatial structure of the dynamic phenomenon. The evolution sequence consists of two or more instantaneous states during the lifespan, and each sequence has a similar spatial structure and similar thematic characteristics. According to an evolution property, there are three types of basic sequence, i.e., a production sequence, a development sequence, and a death sequence. The basic sequences are linked together through instantaneous states to construct a complicated sequence or a geographic process. An instantaneous state depicts a spatial structure and the thematic characteristics of a geographic phenomenon at a given snapshot.

Process semantic supports geographical dynamic mining as a main line including from a process object extraction through a mining algorithm to process pattern exploration.

According to the process semantics, we design a process-oriented clustering method, and choose California coastal region as analysis area, where is also a research hotspot of global change. The spatiotemporal clustering patterns from May 2009 to May 2011 in this region are shown in Fig. 2.

Fig. 2.  The spatiotemporal clustering pattern in the California coastal waters. 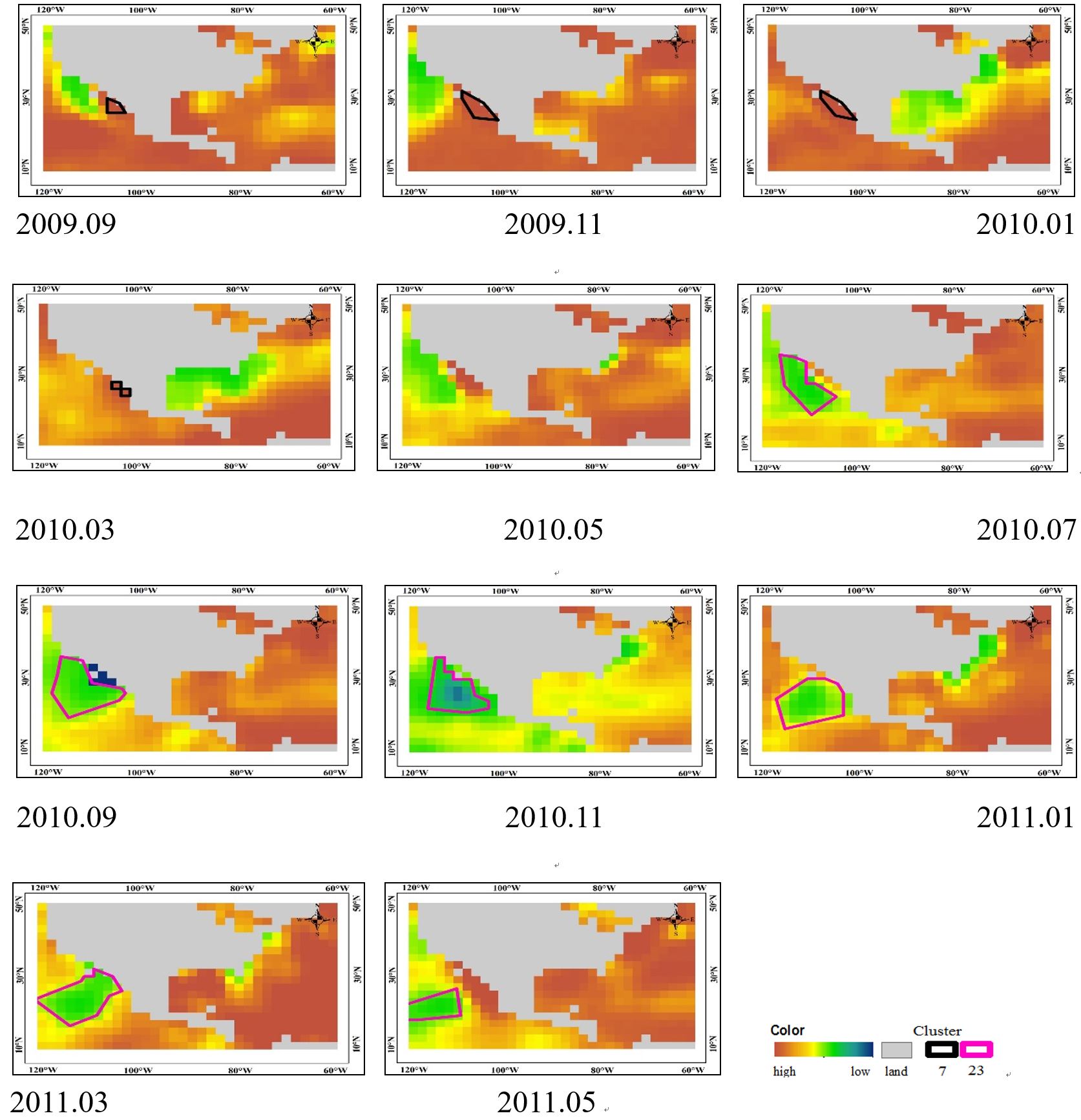 During the El Niño process, the D-7 is the main spatiotemporal cluster in the California coastal waters. The D-7 begins in September 2009, and expands in space from September to November. Since January to March 2010, the D-7 is shrinking in space. From May to July 2010, the El Niño event is at the destroy stage and the La Niña event is about to begin, D-7 is fading away and the D-23 appears in this region. The spatial scope of D-23 is larger than D-7. And the D-23 also has the dynamic change of expansion, stability, decrease and disappearance in space during the La Niña process. Besides, the D-23 moves gradually away from the land over time. The relationship between spatiotemporal change of the spatiotemporal clusters and the ENSO process is shown in Fig. 3.

Fig. 3.  The relationship between the SSTA spatiotemporal clusters and ENSO process.

Figure 4. The relationship between the evolution of the mined process and the El Niño event. 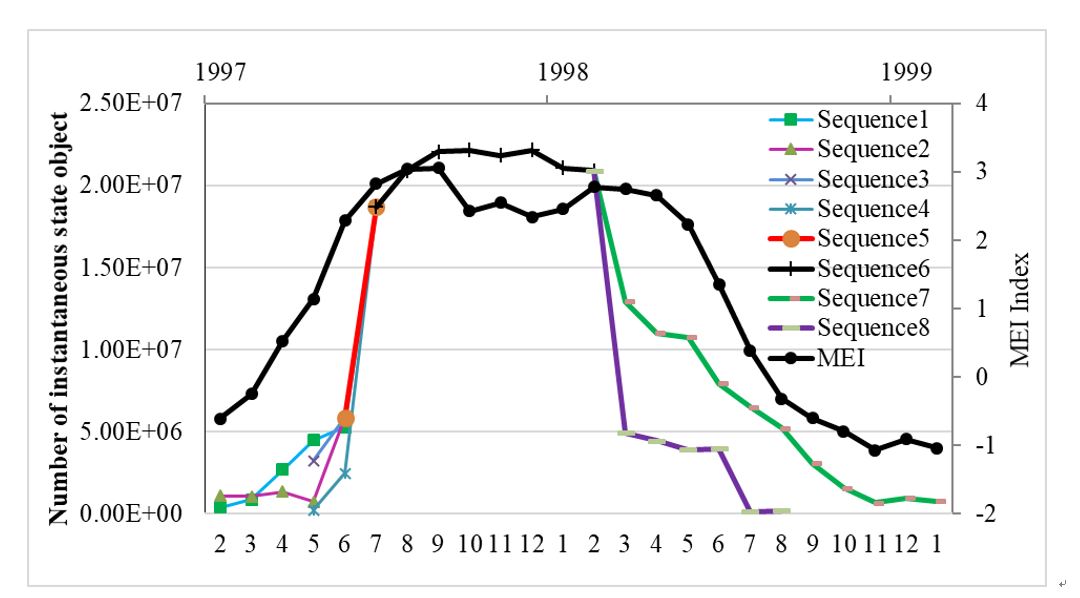 MAVs has a property of evolution from production through development to death. Traditional data models and spatiotemporal analyzing methods have great challenges to deal with such MAVs. The proposed process-oriented data mining method takes the evolution of MAVs from the bottom as a semantic to design the mining method. The main contributions are as follows.

1)     The process-oriented semantic ensures that the MAVs are represented and stored but also provides a mechanism for addressing their spatial evolution.

2)     The process-oriented MAVs extracting algorithm ensures that the spatial object of MAV, its changes and change behaviors as well are obtained.

3)     An evolution of sea surface temperature anomalies in the Pacific Ocean will strengthen or weaken the intensity of ENSO events, which could provide new references for global change research.